Netflix Will Release a New Season of Marvel Every Six Months

Plus, Other Highlights from Netflix's TCA Press Day

Members of the Television Critics Association gathered at the Beverly Hilton Tuesday for the first day of presentations from the networks about their original programming. First up was the streaming service Netflix, which shared insights into its original TV series and films with the help of executives, showrunners, and cast members. Here are some of the highlights, including news about Marvel, Narcos, Chelsea Handler, and Aziz Ansari. Plus, one Netflix exec took on an intriguing question: is Netflix spying on us? 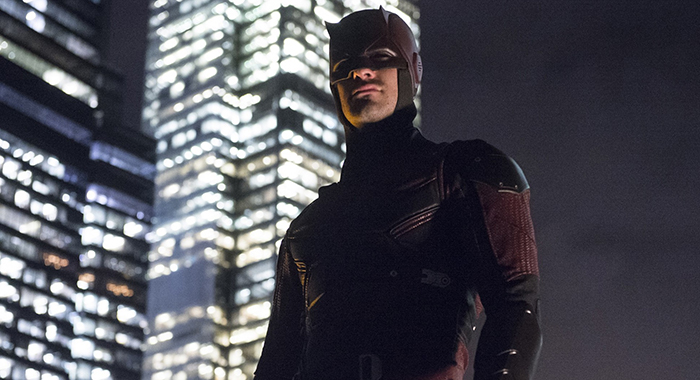 Netflix chief Ted Sarandos addressed members of TCA Tuesday with the streaming service’s plans for distributing its many Marvel properties, which include series based on the characters Dardevil, Jessica Jones, Luke Cage, and Iron Fist. With Marvel’s Jessica Jones starring Krysten Ritter and David Tennant dropping at the end of 2015, and Marvel’s Daredevil returning for a second season in 2016, Netflix subscribers can probably get into a rhythm of a new season of something Marvel about every six months from the Defenders group. “Then they’ll cross over and do a combined season once we’ve launched the first season of each of the four characters,” Sarandos explained.

Jessica Jones showrunner Melissa Rosenberg also spoke about her upcoming series Tuesday, and how it fits into the Marvel Cinematic Universe. “The mythology of the universe is connected [to Daredevil], but they look very different; tonally, they’re very different,” Rosenberg said. “If you pick up Bendis’ graphic novel Alias, and you pick up Daredevil, they’re wildly different.” And speaking of Daredevil, season one showrunner Steven S. DeKnight shared the reason Rosario Dawson’s character is named Claire Temple in the series, rather than Linda Carter (aka Night Nurse). Marvel might be holding Linda Carter for a Night Nurse movie! 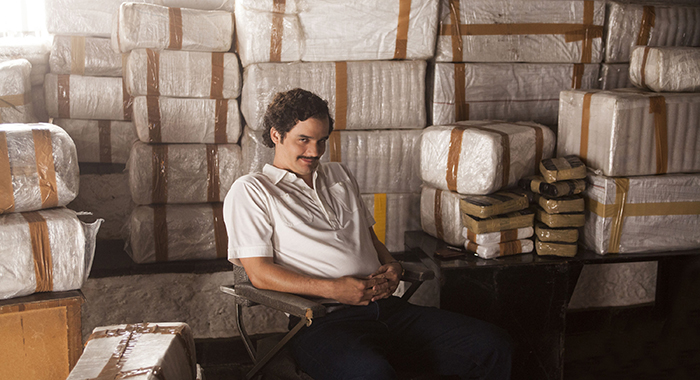 Narcos, a new series chronicling the life of Colombian drug lord Pablo Escobar, is proudly derivative of a seminal Martin Scorsese gangster flick. Executive producer Jose Padilha told TCA reporters Tuesday, “It is Good Fellas-inspired and I love it… I thought it would be really good to do something that is not cinema — it’s not TV either, it’s Netflix — and to do that format, long-style.” One way that Narcos will draw inspiration from Good Fellas is through the use of narration. “Henry [in Good Fellas] is taking the audience into the world of mafia and telling the audience the complexities of that world — how it works — and voiceover is really good for that. We have two characters, DEA agents, who are taking us into the world of cocaine and into the world of Columbia.”

Former Game of Thrones actor Pedro Pascal (Oberyn Martell), who plays Mexican agent Javier Pena in Narcos, compared the two roles. “Game of Thrones [could] take a lot of inspiration from the story of what went down in Colombia and the war that was fought,” Pascal said. Moments later, he declared, “We don’t need dragons. We got cocaine!”

All 10 episodes of Narcos will be available on Friday, August 28.

CHELSEA HANDLER IS FLYING TO PERU TO TAKE AYAHUASCA 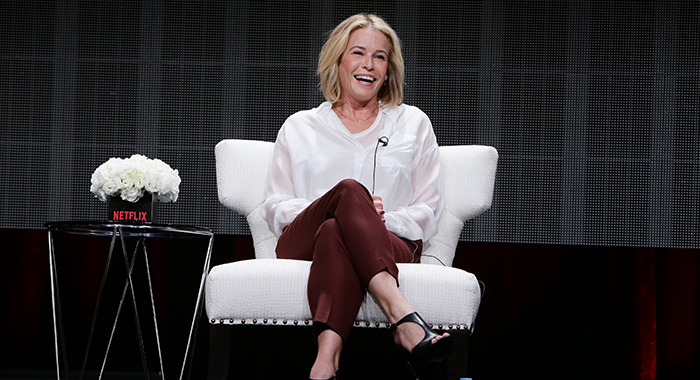 When Chelsea Handler departed from her successful late-night E! series, Chelsea Lately, many wondered if she might take over as the host of a network show. Instead, Handler went to Netflix, where she will have her own talk show for the service — its format and frequency still unknown.

Until then, however, Handler fans can look forward to a series of documentaries on Netflix called Chelsea Does, in which the host/comedian will take on various facets of life that interest her: marriage, racism, drugs, and Silicon Valley (the place, not the TV show). “Technology makes me so irate,” Handler said with regard to the tech-focused doc, admitting that she’s not totally sure how to operate her Tesla. “Interestingly enough, this is the one I’m most passionate about.”

For the installment of the series focused on drug use, Handler will fly to South America and take ayahuasca, a hallucinogenic brewed from a Peruvian vine. “It’s important to get an authentic [shaman] from Peru to explain the experience you want to have happen,” Handler said about her upcoming trip. “And, hopefully, knowing that it will be public, they will be extra careful with me. But who knows?”

EXECUTIVE SAYS NETFLIX IS NOT SPYING ON YOU 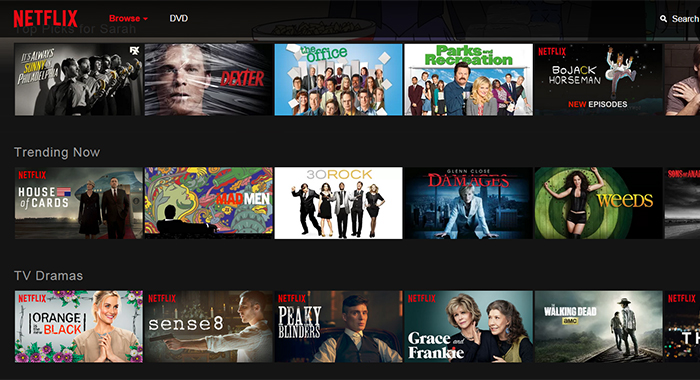 Todd Yellin, Netflix’s head of product innovation, fielded questions from TCA reporters about the ways in which Netflix personalizes users’ experience.  One question that came up? Is Netflix spying on us by tracking all of our viewing behaviors?

“We’re not spying and I’ll tell you why,” Yellin said. “We’re a subscription service on Netflix, and I thank God every morning I wake up that we’re not an advertising service because I have friends who work down the block from me up in Silicon Valley — brilliant people — at places like Facebook and Google, and those places are driven by ads. And so when they get your information and want to personalize the experience, they are driven by two masters: their advertisers and also their customers. My team and I have one master: our subscribers.”

According to Yellin, the goal of collecting user data on Netflix, including which titles you watch, where, when , and on what type of device, is singular: to make using Netflix easier. “Spying would be this nefarious thing that we’re trying to do something against you. We’re using the data on your behavior only to make your experience better.”

AZIZ ANSARI SERIES HAS A TITLE AND RELEASE DATE 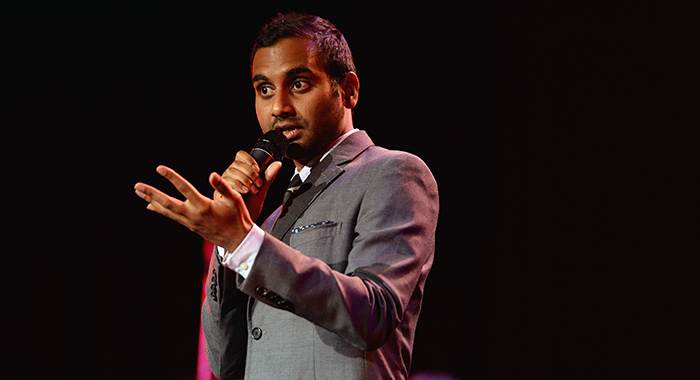 Comedian and actor Aziz Ansari took to the Netflix stage with former Parks and Recreation producers Alan Yang and Mike Schur to discuss their upcoming comedy, Master of None, which will premiere November 6. According to Ansari, the title of the series was the last piece to fall into place.

“For months, we were batting around ideas, and we never liked one… We finished shooting all the episodes and still didn’t have a title.” Finally, they settled on Master of None, an option Ansari pitched early on in production that no one else seemed too excited about. “It’s hard to come up with a title, but I like Master of None.  It’s a good thing I do, because that is the title.”

Master of None will star Ansari as a 30-year-old actor living in New York who hasn’t quite figured out his life’s path yet. Leaning heavily on Ansari’s own point of view as represented through his stand-up comedy, the series will feature a number of guest stars, including Claire Danes (Homeland), Noah Emmerich (The Americans), Colin Salmon (Arrow), Noel Wells (Saturday Night Live), H. Jon Benjamin (Wet Hot American Summer: First Day of Camp) and Ansari’s own father!