Negan's Gory New Plan in The Walking Dead Has Legs

Allegiances are tested in "Dead or Alive Or" as the TWD heroes regroup after losing one of their own. 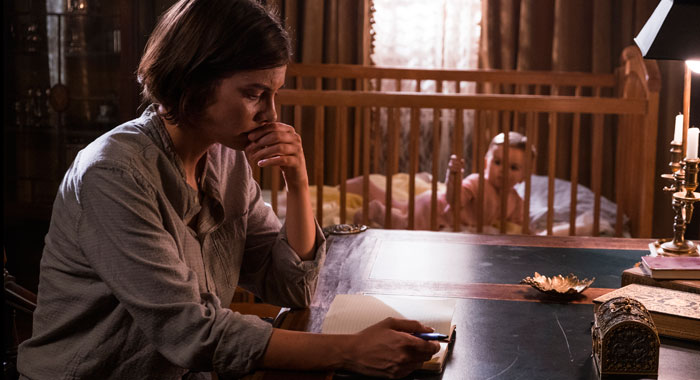 With the effects of Carl’s (Chandler Riggs) death rippling through the second half of The Walking Dead season 8, Sunday’s Rick-less (Andrew Lincoln) episode, “Dead or Alive Or,” highlighted the blurred morality that distinguishes Maggie’s (Lauren Cohan) Hilltop from Negan’s (Jeffrey Dean Morgan) Saviors. And while Carl’s charity toward Siddiq (Avi Nash) may have been the precursor to his demise, his humanitarian move could ultimately inspire change in Maggie’s leadership strategy.

SPOILER ALERT: THIS ARTICLE REVEALS DETAILS OF EPISODE 11 OF SEASON 8 OF THE WALKING DEAD. 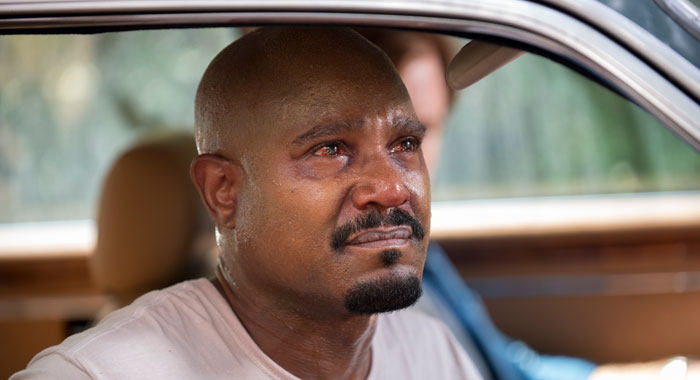 “Dead or Alive Or” continues the zombie series’ exploration of the concept of right and wrong within this broken world, where the rule of law is as twisted and bloody as the barbed wire wrapped around Negan’s bat. The episode mostly focuses on unanswered questions from the past, but gives audiences some much-needed, albeit temporary, hope in the form of Father Gabriel’s (Seth Gilliam) continued redemption. With blood seemingly on everyone’s hands, you have to wonder: Is it possible God even exists in the zombie apocalypse?

As soon as Dwight (Austin Amelio) suggested Daryl (Norman Reedus), Tara (Alanna Masterson), and Rosita (Christian Serratos) lead the Alexandria refugees through the swamps, it became clear that bloated zombies would be crawling out of the muck.

Over the years, the series has showcased Greg Nicotero and crew’s creativity and impeccable skills in bringing a variety of walkers to life. Among the best are some gory nods to classic horror movies. These walkers — err, swimmers? — feel like another nod to Dan O’Bannon’s The Return of the Living Dead. But instead of one Tarman, our heroes are faced with a gaggle of muddy walkers, all emerging from the swamp for a taste of some delicious brains.

To the swamps! What could possibly go wrong? #TheWalkingDead pic.twitter.com/r6GgEP7SFu

#TheWalkingDead looks like they whacking a mole hahaha pic.twitter.com/JtVO2cLKeS

You know I wonder if leeches exist in the zombie Apocalypse. If so hope everyone checks under their clothes. #TheWalkingDead #TWD #TWDFamily pic.twitter.com/DCUMRBZ114

Daryl and Rosita were keeping Dwight alive for helpful insight into Negan’s operation, but Tara was having none of it. Let’s remember, he killed off her girlfriend Denise (Merritt Wever) back in season 6 — with Daryl’s crossbow, no less. Even after his heartfelt apology, Tara, who not that long ago fought alongside the Governor (David Morrissey), sought her own hypocritical revenge.

Then the Saviors showed up. Instead of tattling, Dwight sacrificed his freedom, leading Negan’s goons the other way. As hypocritical as this whole thing was, it looks like Tara has finally changed her tune. When they meet again, will things be copacetic?

Did… Tara forget that she was with the Governor when he killed Hershel? #TheWalkingDead pic.twitter.com/FEt9Hufx0k

I really believe that Tara forgot where she come from!?#TheWalkingDead #Twd pic.twitter.com/To3PTEGiQS

Tara pointing the gun at Dwight even though she was chilling with the Governor before #TheWalkingDead pic.twitter.com/rc7KGriTmT

Did Dwight just save Tara and the rest? Survey says… #TheWalkingDead pic.twitter.com/EpjAVx3sQu

When are we killing her off again? pic.twitter.com/UodgEfsVB5 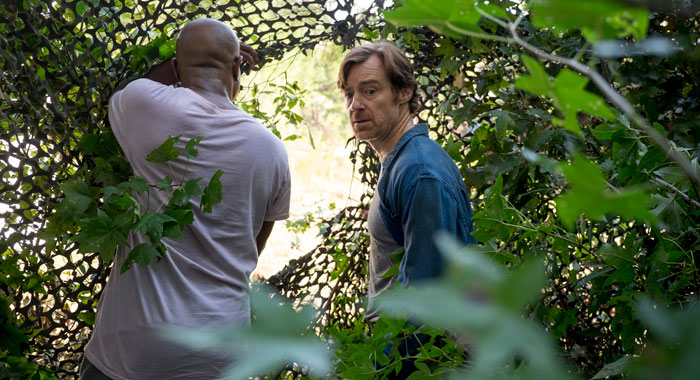 Each step of their journey, Father Gabriel and Dr. Carson (R. Keith Harris) faced one convenience after another: An abandoned cabin, antibiotics to break Gabriel’s fever, car keys, and a map. All this time, Gabriel insisted that God set them on this path and that this was all a part of His plan. And then Carson fell into a bear trap, leading to gunshots fired at the looming walker threat.

The Saviors came, of course, leading Carson to grab their captor’s gun — empowered by Gabriel’s faith — only to be shot dead. So, uh, who’s going to deliver Maggie’s baby? Great timing, Siddiq.

Me seeing the Doctor grabbing the gun. #TheWalkingDead pic.twitter.com/Jul8MHyo6c

The apocalypse doesn’t seem to be the right place for doctors. #TheWalkingDead pic.twitter.com/Qa44x3ZbDM

Ah, the ole one doctor rule still in effect on #TheWalkingDead. pic.twitter.com/jUUD0EsW0s

4. EUGENE GOT A PROMOTION 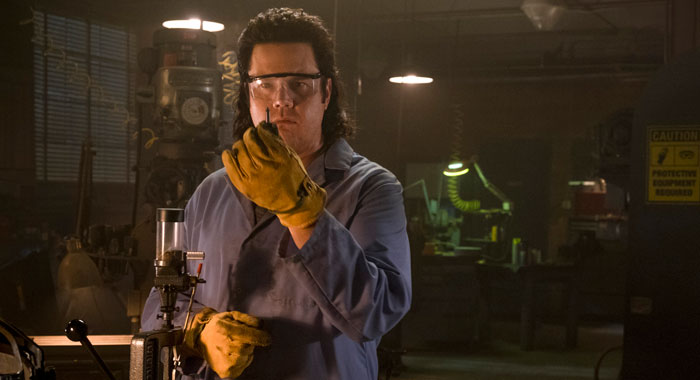 It seems the more annoying Eugene (Josh McDermitt) gets, the more Negan seems to trust him. Aside from the sheer aggravation of seeing Abraham’s (Michael Cudlitz) former sidekick live it up in the Sanctuary — with all the wine and pickles at his disposal — there’s a strong possibility that Negan gave him his own bullet-making outpost to keep a close eye on him.

More than ever, Eugene’s got enough power and influence to treat everyone else like trash. But with the return of the near-blind Father Gabriel, the man he secretly helped escape, it’s beginning to feel that Eugene’s days may be numbered.

Eugene at the outpost #TheWalkingDead pic.twitter.com/M5hEth1CDX

Eugene whenever he talks to Negan #TheWalkingDead pic.twitter.com/rS7t1RnAJo

I hate Eugene!!!!!!! More and more now. I’d like to stick Lucille up his ass. #TheWalkingDead pic.twitter.com/yLJylxMJc7 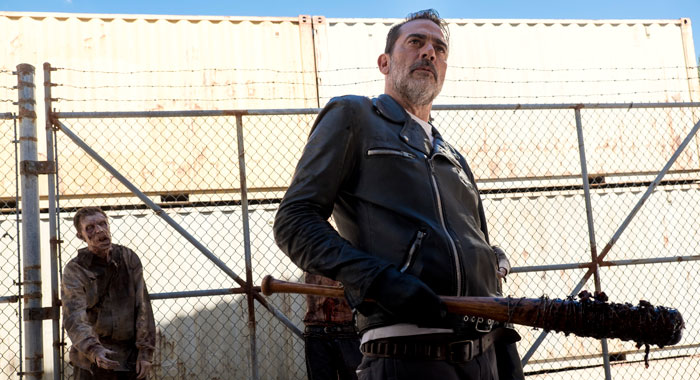 In his attempt to keep Negan from discovering he freed Gabriel and Carson, Eugene suggested a more visceral approach to attacking the Hilltop Using a catapult to launch zombie guts over the wall seems silly, but Eugene’s ramblings inspire a new plan.

“Dead or Alive Or” ends with Negan burying Lucille in a walker’s bloody maw. His new strategy is to infect everyone who gets in his way with the tip of his bloody bat. Gory possibilities aside, does this even make sense? The Walking Dead has long established the zombie virus is airborne, which means infected blood doesn’t turn people. Are the rules about to change, or does Negan know something we don’t?

Eugene's got a plan! pic.twitter.com/MlUg7tgwm1