Mac and Me Should Have Been a Horror Movie

Instead, it's just a cynical exercise in product placement full of inexplicable choices, and it never rises to achieve any more than that. 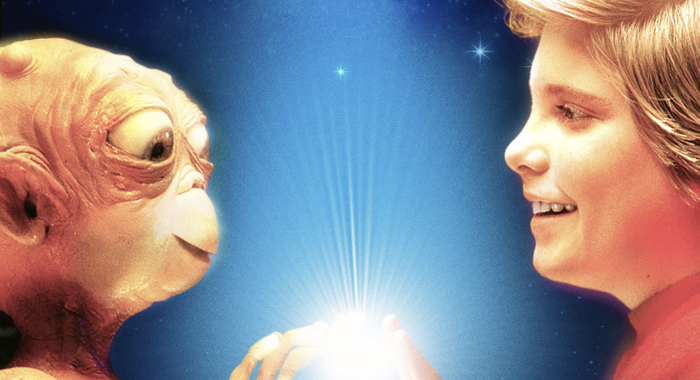 In 1982, something wonderful and miraculous happened that changed the art and business of film forever. Steven Spielberg’s beloved 1982 masterpiece E.T. integrated Reese’s Pieces into its instantly iconic story of a homesick alien’s friendship with a little boy in a way that was organic and unforgettable and, naturally, sold a lot of Reese’s Pieces.

E.T. also had a few other distinctions, of course. It was nominated for nine Academy Awards in big categories like Best Film, Best Director, and Best Original Screenplay and triumphed in four technical categories. Oh, and it was the top-grossing film of all time before Spielberg’s own Jurassic Park bested it and became a beloved, iconic, essential piece of Americana in its own right.

But as far as the makers of the exquisitely misguided 1988 knock-off Mac and Me were concerned, all that mattered was that Spielberg’s box-office champion used a heart-tugging tale to sell an unhealthy consumer product by linking it forever in the public mind with a successful motion picture.

E.T. illustrated that, when creatively and naturally implemented into a story, product placement could be big business and, perhaps even more remarkably, capable of enhancing the experience. It was an insanely lucrative and influential afterthought for the master craftsmen behind E.T., who were primarily concerned with making a great film. In Mac and Me, however, product placement became the entire point.

The thinking seemed to be that if a perfect showcase like E.T. could do huge things for a then-modestly popular candy like Reese’s Pieces, then just imagine how massive, blue-chip global giants like McDonald’s and Coca-Cola could benefit from a similar movie. Crafted in the E.T. mold, Mac and Me existed, more or less, to brainwash impressionable, easily entertained children into equating the two corporate behemoths — both major sources of tooth decay and childhood obesity — with pure joy and happiness. Coca-Cola is depicted as an elixir of the Gods that can literally revive the dead and bring about intergalactic harmony, and while the “MAC” of the film’s title supposedly stands for Mysterious Alien Creature, we earthly consumers know what it really represents: it begins with “Mac,” ends with “Donald’s,” and slings burgers with the help of a clown mascot named Ronald.

This cynical exercise in crass commerce is guilty of many, many crimes — aesthetic, commercial, and otherwise — but it cannot be accused of false advertising. Mac and Me promised to be Product Placement: The Movie starring Coca-Cola and its good friend McDonald’s, and it delivered. 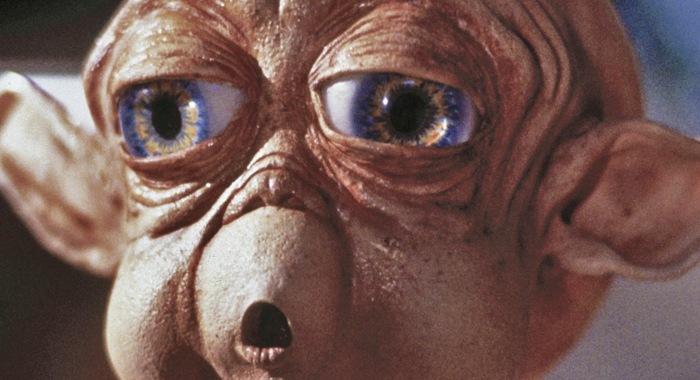 M&Ms notoriously turned down the opportunity to be featured in E.T., understandably worried about their product being linked to a character they saw as a hideous garbage monster who would terrify and traumatize small children. Of course, E.T. ended up charming and enchanting youngsters instead, so it initially seemed sane and business-savvy for Coca-Cola and McDonald’s to hitch their wagon to another hideous garbage monster who, ultimately, did actually terrify and traumatize small children.

The title character is less a cute E.T. knock-off than a figure of Lovecraftian horror with a puckered anus for a perpetually cooing mouth, scrotum-like wrinkles across his bulging forehead, boils for eyes, and fingers like diseased phalluses.

Mac is chilling on his home planet with his even more viscerally repellent, equally disturbing, and distractingly nude family when an American spacecraft sucks them up and transports them to Earth, where the shadowy, sinister United States government has set out to capture and imprison the titular space creature, and kill him if necessary.

He eventually joins forces with wheelchair-bound moppet Eric Cruise (Jade Calegory), who has recently moved from Chicago to Los Angeles with his girl-crazy older brother Michael (Jonathan Ward) and single mother Janet (Christine Ebersole). But before they can enjoy a mawkish friendship, Mac spends a disturbing amount of time lurking outside the little boy’s home and spying on him like a creepy intergalactic stalker in need of a space restraining order. It would only take the elimination of a few scenes of ebullient brand worship and a completely different score — maybe one by fright master John Carpenter rather than Alan Silvestri — to transform this from a hilariously inept knock-off into a terrifying horror film about an innocent, vulnerable boy being menaced by a monster from another world.

That said, Silvestri’s score is easily the best element of Mac and Me. It’s a first-rate approximation of E.T.‘s score, and it single-handedly lends an element of otherworldly, twinkly wonder to a movie that does not deserve it, or the thin, deceptive sheen of professionalism Silvestri’s work gives it.

And while Mac and Me could be a deeply unnerving horror movie about nightmare-inducing beasties from another world, that fright flick is undercut throughout by the movie’s need to shill for its corporate masters as blatantly as possible. No one involved with the production made even the faintest attempt to differentiate it from the masterpiece it so shamelessly and incompetently rips off, or to make Mac someone children would love and want to befriend, not run away from in mortal terror. 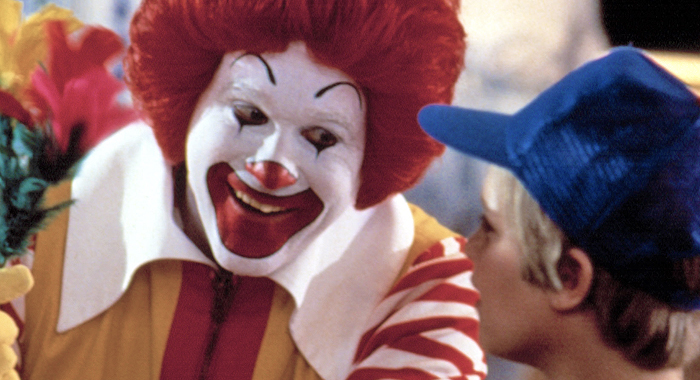 All of the filmmakers’ time and energy instead clearly went into making a quasi-religious reverence for its big-brand sponsors the central narrative thrust of the film. The cute girl next door Eric has a crush on spends the entire film in her lime green McDonald’s uniform, prompting her obnoxious younger sister — who, like Calegory, delivers all her lines in a migraine-inducing chirp-yell — to make offers to the boys next door that they cannot refuse, like “Why don’t you stop by for a Big Mac?”

Michael: You know what I feel like?
Eric: A Big Mac?
Michael: The man is a genius!

The Coca-Cola plugs also begin early and never let up. Despite being presented as heroic, child-like heroes, for example, Mac and his family have no respect for private property when it comes to their beloved Coca-Cola. In an unintentionally horrifying set-piece late in the film, Mac’s father and his hideous brood enter a grocery store where they procure mass quantities of the drink, and he ends up in possession of a gun. He’s only been on Earth for a little while, and already he’s waving a gun around and shoplifting with his whole family. And we’re supposed to be on his side!

The rightly mocked plugs for caffeinated sugar water are subtle and artful compared to the most notorious scene in the film, during which Eric’s family and Mac attend a birthday party at a McDonald’s. From b-boys to football players, everyone is so overjoyed to be in the house that Ray Kroc built that they break out in a series of intricately choreographed dances. Not to be outdone, Mac, wearing a filthy teddy bear suit, dances on the McDonald’s counter in an appalling display of disregard for health codes.

The movie ends with the entire extraterrestrial family being granted American citizenship in recognition of their extraordinary and exemplary consumerism, as well as their commitment to Coca-Cola, McDonald’s, and, to a lesser extent, the values and principles laid out by the Constitution and Declaration of Independence.

Like a surprising number of movies I’ve covered in this column, Mac and Me teases that the whole gang will be back in a sequel. It was not to be. The movie was a notorious flop, and McDonald’s and Coca-Cola went out of business shortly after the film’s failure. That’s not true, of course. Both franchises continue their ubiquitous existence despite their regrettable involvement in Mac and Me, not because of it.

Mac and Me might have seemed like the most garish and ephemeral of pop nonsense upon its release, but in its own strange, tacky way, it has endured. For years, American treasure Paul Rudd has prankishly presented an appropriately iconic, unintentionally hilarious excerpt from Mac and Me — the scene in which wheelchair-bound Eric plunges off a cliff to his apparent death before Mac’s hideous head climactically pops up — as a clip from whatever film he’s promoting as a guest on Conan O’Brien’s talk shows. It’s one of contemporary pop culture’s most effective and inspired running gags.

And the nostalgia merchants over at Shout Factory recently answered angry public demands by releasing a 30th anniversary Blu-ray of the film, complete with an audio commentary from director/co-writer Stephen Raffil and writer and historian Marc Edward Heuck.

Mac and Me is good-bad trash cinema at its best/worst. It’s an endlessly, perversely re-watchable exercise in crass commerce cynically masquerading as family entertainment that exists in a world beyond self-consciousness, beyond shame, beyond irony, and, ultimately, beyond self-parody. It’s a true Zero whose breathtaking audacity and incompetence deserve to be mocked, but also celebrated. 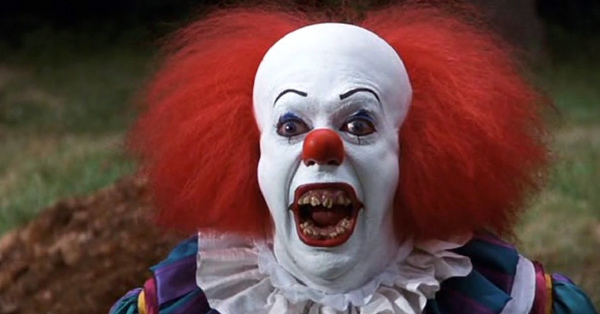 17 Terrifying Clowns From Movies and TV