Plus, Raw and My Scientology Movie are Certified Fresh.

This week at the movies, we have the return of everyone’s favorite skyscraper-scaling monster (Kong: Skull Island, starring Brie Larson and Tom Hiddleston) and a whole bunch of limited releases. What are the critics saying? 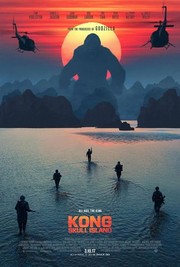 A man, a plan, a giant ape: these ingredients have come together to create creature-feature magic on more than one occasion since King Kong debuted in 1933, and they’re back together again for this weekend’s Kong: Skull Island. Starring Brie Larson, John Goodman, Tom Hiddleston, and Samuel L. Jackson, the big furry guy’s latest onscreen adventure basically hits the reboot button on the Kong saga, sending a group of intrepid adventurers out to an uncharted island where giant creatures fight for dominance — including the nasty “skull crawlers” that have pushed Kong’s kind to the verge of extinction. Director Jordan Vogt-Roberts lays some heavy Apocalypse Now vibes over the ’70s-set action, but there are some progressive narrative elements in the mix too — none of which are as important as the all-out giant monster action, which critics say is pretty cool even if we’ve seen more or less all of this before. The fate of Legendary’s emerging “MonsterVerse” hinges on how well Kong: Skull Island fills its chest-thumping brief; fortunately, reviews describe a movie that manages to deliver all the effects-driven excitement audiences are looking for. If it sometimes skimps on the human drama underneath it all, well, that’s par for the course — and hey, maybe 2019’s Godzilla: King of the Monsters will make room for a few more character-driven moments. (Just kidding!)