Shot fast and cheap in Venice in 2001, Hotel is even looser than director Mike Figgis‘s earlier Timecode. That had to keep four images in some sort of sync and thus could ill-afford sloppiness, but this improvised effort (Figgis’s background is in jazz, which says a lot) is lopsided, wilfully strange, not always coherent and feels as if lost hours of ‘deleted scenes’ might explain things.

The 24, mostly-excellent ‘web shorts’ included as an extra on the DVD don’t actually help with the story, but at least give actors who barely register in the actual film a shot at getting a laugh. They don’t seem to be online as of this writing, which is a shame. Despite everything, Hotel is a fun watch, has a freewheeling feel, is full of good jokes, and stretches to unusual creepy or erotic sequences. Even viewers who reject it out of hand (and there will be a lot) will find some scenes sticking in the memory — though I’d worry about anyone who tries to copy the kinkier stuff.

In the opening, guest Omar Johnson (John Malkovich) joins the staff of the Hungaro Hotel in Venice in a meal, which he partakes in from behind bars in a basement. The fare on offer turns out to be prosciutto made from human flesh. It seems the manager (Danny Huston) and his observant, odd staff — not to mention a huffy tour guide (Julian Sands) — are some variety of vampire, and they lurk in the background or around the margins, waiting for the unwary to wander into their clutches (Figgis consigns several of his most loathesome characters to their larder).

The guests are filmmakers working on a loopy-sounding Dogme version of John Webster‘s Jacobean The Duchess of Malfi. The nearly covert plot involves an assassination attempt which puts flamboyantly difficult director Trent Stoken (Rhys Ifans) in a coma so that sneaky producer Jonathan Danderfine (David Schwimmer) has to take over the film, a process which involves getting close to Stoken’s girlfriend-star Naomi (Saffron Burrows).

We get a few scenes from Malfi, as adapted by Heathcote Williams (who also plays Boscola), and glimpse what Burrows (“I am Duchess of Malfi still”), Mark Strong and other talents could make of the text; the play is so grotesquely violent and demented there has to date been no serious attempt to film it. There are sly send-ups of the Dogme film movement (“it means it will be badly-lit”), though the film-within-a-film scenes are actually slicker than the surrounding stuff. Salma Hayek shows up as the monstrous ‘Charlee Boux’, a catty cable TV documentary host who comes on like a feral version of the Geraldine Chaplin character from Nashville and enjoyably gets into a hissing fight with a rival (Lucy Liu) which echoes the animal snarling director and producer do at each other. Ifans is a lively, powerful, funny presence as a director who might be either a genius or a total idiot, and the film’s energy level sags notably when he’s in a coma. 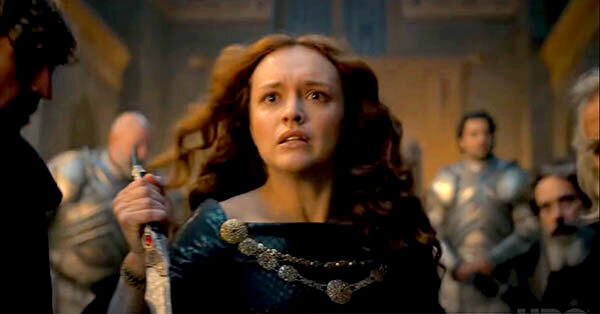