Crime anthology is a dramatic departure for American audiences who know Hawes from charming Masterpiece work like The Durrells in Corfu. 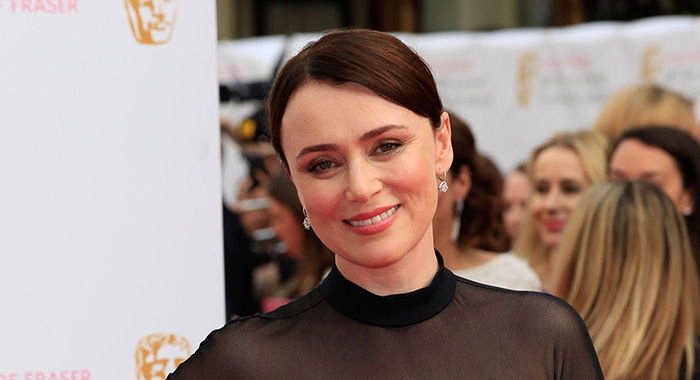 Keeley Hawes plays a devastated mother who endures the loss of her child in the second season of Starz crime anthology series The Missing. Her emotional portrayal helped the series impress critics again in its second season, which airs its finale this week. The result: a 100% Certified Fresh Tomatometer score.

The Missing focuses on an abduction, delves into the crime and its investigation, and highlights how it affects the families involved. The season 2 case centers on British girl Alice Webster (Abigail Hardingham), who seemingly returns to her family after being taken 11 years prior. Alice’s father Sam (David Morrissey) is a British military officer stationed in Germany and mother Gemma (Hawes) is a teacher on the base. The couple is overwhelmed by their daughter’s return and the impact it makes on their lives.

The tale is further complicated further when Alice says she was with another missing girl, Sophie Giroux, which prompts ailing French detective Julien Baptiste (Tchéky Karyo) to come out of retirement to revisit the Giroux case he worked on years before. Baptiste gets involved in — and interferes with — the investigation run by a British military investigator on the base, Eve (Laura Fraser), to try to find Sophie and apprehend the girls’ captor.

The series once again uses the multiple time-frame device, jumping between Alice’s return in 2014 and present day, showing how the events have affected the family and the community, while also unraveling the crime.

Hawes is known to U.S. audiences for film work like 2007’s Death at a Funeral, in which she co-starred with her husband Matthew Macfadyen, and TV turns on PBS Masterpiece fare including Upstairs Downstairs and, more recently, The Durrells in Corfu.

She spoke with Rotten Tomatoes about the series, how its compelling writing secured her for the project, and how cast mates helped lighten the somber mood on set. She also weighed the benefits and disadvantages of binge-watching TV. 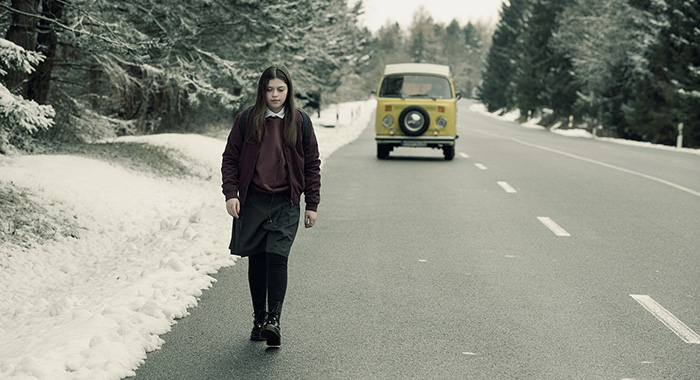 Kit Bowen for Rotten Tomatoes: How did the story grab you when you first read it?

Keeley Hawes: It’s sort of like a car crash; you don’t want to look, but you sort of can’t tear your eyes away. I’ve described it before as a great book that, you know, you cannot put down. I sat on my sofa and read the first episode. I was supposed to be getting the kids ready or doing something else and that didn’t happen. So onto the next episode — and my husband was taking everything over — and then by the time I’d finished all seven episodes — obviously there are eight, but I wasn’t sent the eighth initially — I mean, it was just a few hours later, and I don’t even know what had happened, because I just sat there until I’d finished all of them. It’s so telling because the writing is that good, and the story and the characters are that gripping, then as long as the right people are involved, it will translate. It should. It ought to translate to the screen, and it did.

RT: This season really kept viewers on their toes, trying to figure out the puzzle, especially jumping around within the time frames.

Hawes: I think maybe it should come with a warning at the beginning, or just some sort of guidelines saying “watch the haircuts” or something, because as soon as — certainly in the U.K. when people were watching it — there was a little bit of confusion, and then as soon as everybody was sort of halfway through the first episode, and certainly by the second episode, everybody said “It’s the haircuts! Just look at the haircuts!” And then you know exactly where you are. If I’ve got a bob, or David [as Sam] has scars, it’s the present day.

There are all of these pointers. It does take a while, but I think that’s a really good thing. People aren’t spoon-fed by this show. You really have to watch it, and you can’t be sort of sloppy about watching it. It demands your attention. So I think that’s great and in the States, you guys are lucky enough to be able to download the whole thing in one go; whereas in the UK, everybody had to wait for a week, which in some respects is a good thing but in others… I love a box set, so I know how annoying it is to have to wait.

RT: I’m a bit of a TV binger myself, although I will fully embrace a show that I have to wait on. I did get to watch all of The Missing season 2 in one sitting, though, and it’s like what you described: I literally couldn’t stop watching it. Two days of my life —

Hawes: They are just lost. There are two lost days that you’ll never get back. It’s good fun. It’s like when you’re binge-watching, you think, “I watched all of Stranger Things yesterday, and I had to stop myself from just scrolling forward to the end of every episode to know what’s happened.” It is that thing when a show is going out and people say to you, “Oh my god, I’m loving this show. What happens?” And then they say “Wait a minute, don’t tell me,” because you don’t actually want to know. I wouldn’t tell them anyway, but of course it’s that joyful thing of what keeps us going back for more, isn’t it? Because we don’t really want to know. We want to find out at the end like we should. 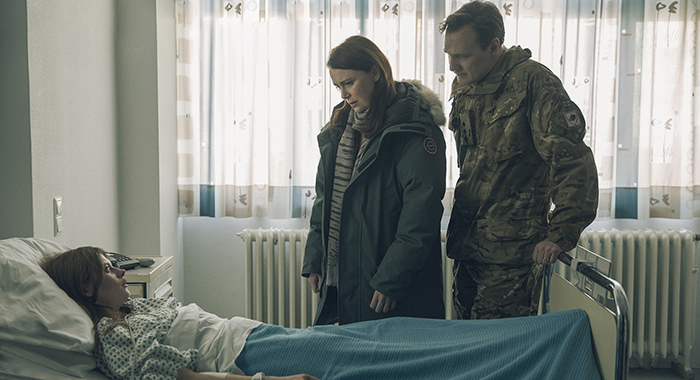 RT: As a mother, could you stop your brain from thinking about what you would do? How did it affect you?

Hawes: There was a little bit of that, but I’m very good at removing myself from that, particularly when the writing is this good. I know that some actors think about their own experiences, and sometimes that is useful but, with this, I absolutely did not ever think of any of my own children. I never used my own experiences in that way and the writing is good enough for me not to have to. I think the thing for me was that I was intent on keeping it light on set, because it took a long time to shoot and it was all quite grim. You have to keep it light; otherwise it would be a very depressing six months. And we all got on very well. I didn’t need to think about my children when I have Abigail Hardingham in there or Jake Davies — they being so brilliant within our story. They were all I needed really and David Morrissey — he’s so brilliant.

Hawes: Poor Abigail! She did such a brilliant job, and she’s just fantastic, but it was a case of trying not to laugh, and we all look so terrible all the time. It’s the least glamorous show I’ve ever done. I did something called Line of Duty and that was very unglamorous, but this was sort of a ticket to another level actually.

RT: How would you all help break the tension?

Hawes: David is hilarious. He really makes me laugh so much. He’s just a really lovely man and incredibly funny. So it wasn’t hard, and also the kids — we just laughed a lot weirdly enough, but I think that’s just a healthy way of going about it. 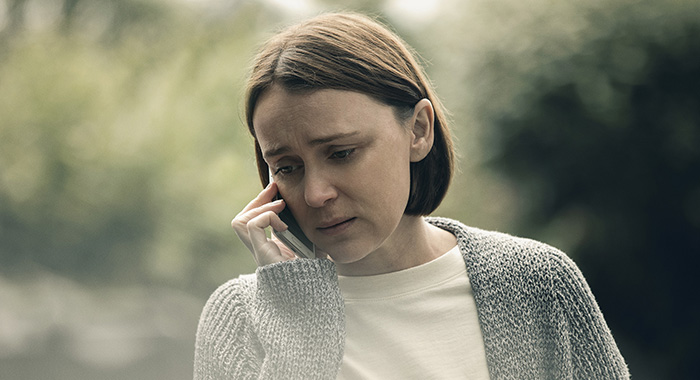 RT: Can you talk about Gemma, who wants her daughter back, but whose gut tells her it might not be right?

Hawes: That was what I loved about her. You know, people often ask me about, you know, “Oh is it great to play a strong woman?” You know there’s a real emphasis on characters for women being strong, and what I loved about her is that she wasn’t strong at all. When we meet her, she’s broken, they’re broken, but there’s something in her that will not let it go. You know, with Stranger Things yesterday, I was watching Winona Ryder do exactly that thing. Even if there’s a tiny just the smallest of hope, you know, you grab it like a dog with a bone. She could not let it go, and I really do relate to that. Of course, I do. That was what I loved about her.

I think David had a very difficult job, because one of them had to be going the other way and just wanting this girl who turns up, for that to be closure. For him to have some closure and for that to be it and that was very difficult, what he had to do because, of course, the whole country, certainly in the U.K., were shouting “You can tell it’s not your daughter. You would know. You would know!” That was very difficult indeed. We had to have both of us going our separate ways with that, but he really made it work.

Hawes: Exactly, exactly. He wanted it so badly to be her that he’s prepared to sit on any question marks that might be arising, but yeah they’re a good couple. They’re very, very sad. It’s very sad because, you know, you do get a glimpse of one scene where you get a little glimpse of the life that they… the couple that could be and the life they could have and, you know, they do get along together and they do love each other, and it makes the whole thing doubly sad really when it all goes to horribly wrong.

RT: What are your thoughts on the subject matter generally?

Hawes: Oh god. Well, luckily, thankfully, it’s not something that happens every day… Gemma at one point says, “It’s OK for everybody else because, you know, it’s just a headline in the paper, and then you can turn over the page and thank god that it’s not you.” That, for me, was one of the most hard-hitting truthful moments in it, really, because thank god for the huge majority of us that is the case. But I think it’s, yeah, it’s just incredibly sad and unbearable to even contemplate, isn’t it? I thought it was a brave thing for Jack and Harry Williams to write this. I thought “God, this is really telling it like it is.” Gemma lives with it every day of her life but for most people they are able to turn the page. We were so lucky with the Williams brothers, and I think a lot of that very painful work had been done because the writing is so good and it’s all there in the writing. 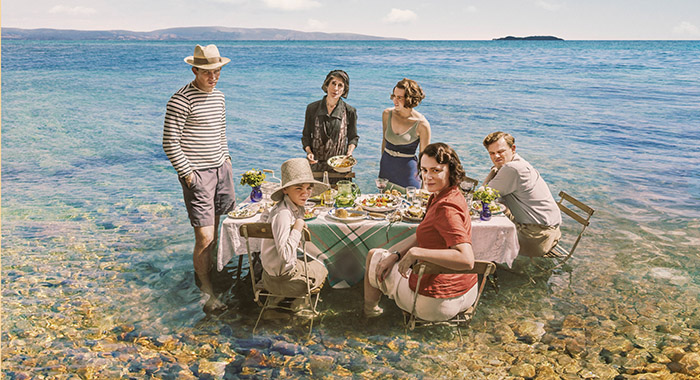 RT: What’s next for you? Something lighter?

Hawes: Well, next month something much happier is coming back to the screens and that’s the Durrells, which in this case is called The Durrells in Corfu. It’s based on that book, and there was a trilogy of books. It’s set in the ’30s and it’s very jolly and complete opposite of The Missing.

The Missing season 2 finale airs Sunday on Starz; the entire series is available on demand and streaming through Starz app