The Brightburn producer and star face their critics – and a movie history splattered with gross-out aliens, singing college kids, and talking dogs.

The producer and star of Brightburn have a long and storied history of collaborations, starting with the gory horror-comedy, Slither. Here we put them both to the critical test, with each reading each other lines from reviews of their work and having to guess which movie is being named. From Scooby Doo to Pitch Perfect 2, with vomit and worms in between, it’s a helluva journey.

Brightburn is in theaters now. 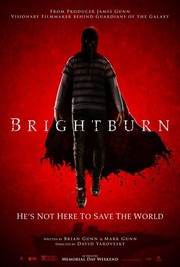 #1
Adjusted Score: 66.548%
Critics Consensus: Although Brightburn doesn't fully deliver on the pitch-black promise of its setup, it's still enough to offer a diverting subversion of the superhero genre.
Synopsis: What if a child from another world crash-landed on Earth, but instead of becoming a hero to mankind, he proved... [More]
Starring: Elizabeth Banks, David Denman, Jackson A. Dunn , Meredith Hagner
Directed By: David Yarovesky

Poll: What Is the Scariest Movie Ever?

Everything We Know About The Mandalorian Season 2