Garner and her castmates in the Shonda Rhimes–created drama examine the real-life outsider who climbed to the top of the New York social scene and defrauded many who should have known better.

Some people have to fake it until they make it.

Anna Delvey faked it so well that she defrauded and embarrassed some of the biggest players in New York’s financial scene, finding loopholes in their social hierarchy as she used her street smarts, knack for detail, and genius memory to climb her way to the top.

But did she make it? That’s debatable. And some of the answers come in Inventing Anna, a limited series premiering February 11 on Netflix and the first project that Shonda Rhimes created under her exhaustive overall deal with the streamer. 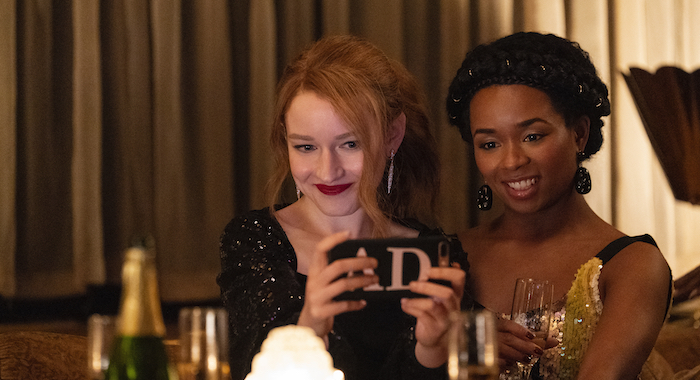 Based on journalist Jessica Pressler’s New York magazine piece about Delvey (real name: Anna Sorokin), The Americans and Ozark’s Julia Garner stars as the 20-something nobody who taught herself (and stole for herself) all the right clothes, meals, and connections in the hopes of creating a more exclusive and specialized version of SoHo House.

Russian born, she told everyone she was a German heiress, but rarely had a dime to her name. In the show, she’s a chameleon: the educated young woman whose attitudes and lifestyle helped rejuvenate finance lawyer Alan Reed (Anthony Edwards) in one scene and the rich, cool best friend whose $100 tips at a swanky hotel are adding up for concierge Neff (portrayed by Alexis Floyd) to be able to afford to finance her student film. 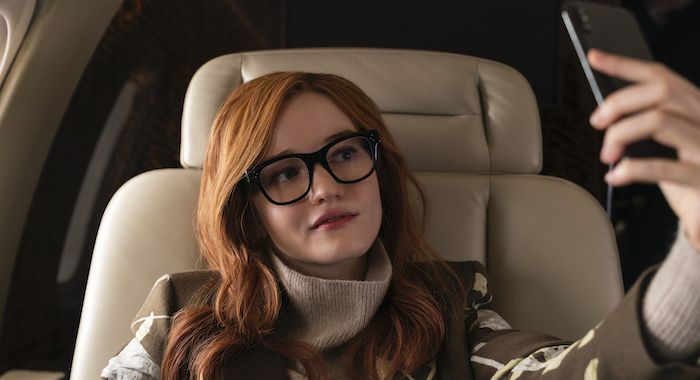 Even her accent shifts depending on the situation.

“Her accent is as confusing to me as to you,” Garner tells Rotten Tomatoes. “She’s a hybrid of different accents. And it is true, her accent does change [depending on] how many Americans she’s around, how many Europeans she’s around. Her accent even changes like if she wants to impress somebody, you know, her accent changes when she lets her guard down and she gets a little more emotional. Her accent is consistently inconsistent.”

And when it all comes tumbling down? She’s the obsession and fascination of Veep alum Anna Chlumsky’s Vivian Kent, a journalist based on Pressler who is hoping an exposé on Rikers’ latest famed inmate will help rehabilitate her own career just in time for her to give birth to her first child — a life change that can feel like a career-ender for a lot of women. 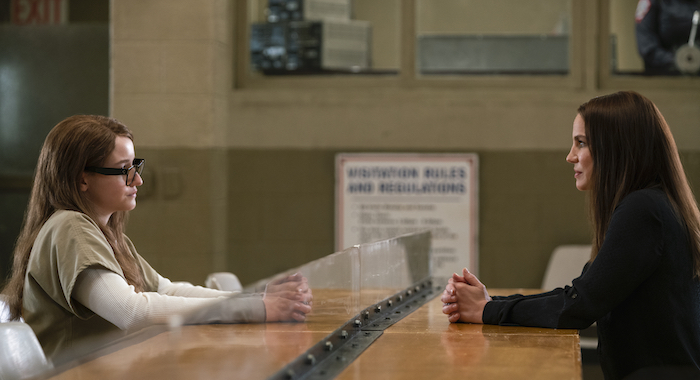 “The story I was embarking on in my head was this huge change is coming, but you have no idea what the other side of it looks like,” said Chlumsky, who has two children of her own. With the first pregnancy, “it’s beautiful terror, you know? I think that you feel like you have to wrap up all the things … that seem open-ended.”

“When you’re put in the position like a busy newsroom or looking for a redemption moment of her own career,” Chlumsky added, “that viewpoint still is the one that drives you. So just because it’s not true that you don’t exist after a baby, it can still feel that way.”

Much to her husband Jack’s (Anders Holm) chagrin, Chlumsky’s Vivian goes deep down the rabbit hole of all things Anna Delvey, turning the nursery into a crime-scene timeline and enlisting the help of other journalists played by Anna Deavere Smith, Jeff Perry, and Terry Kinney.

Vivian finds an unlikely collaborator in Arian Moayed’s Todd Spodek, Delvey’s defense attorney who is battling his own issues of imposter syndrome thanks to marrying above his station and who becomes increasingly more invested in the case. While Todd actually does ask Anna at one point “Do you believe your lies?,” Moayed said she’s still “a magnet to him.” 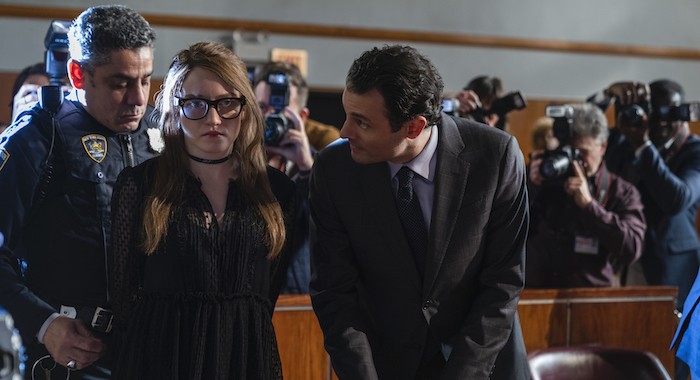 Moayed, who is also known for his work on HBO’s high-class family dramedy Succession, said there is an allure to anything that comes with exclusivity.

“Power corrupts,” he said. “The .00001-percent of any neighborhood can corrupt, whether it’s a small local community or on a national scale … But I think there is something really intoxicating about that kind of wealth. We, as a society that are now addicted to social media, are seeing other people’s elaborate lives … and now I think we are addicted to that kind of fame.”

But it’s not just the wealthy and entitled whom Anna drags down. One of Anna’s most famous exploits was a trip to Morocco with her friends, life coach and trainer Kacy (portrayed by Laverne Cox) and journalist Rachel (portrayed by Katie Lowes). It was understood that she’d foot the bill, but Rachel ended up putting most of the bill, $62,000, on her company credit card — something she wrote about in a essay for Vanity Fair and as a book. In Inventing Anna’s version of the story, Rachel does not come across as a victim inasmuch as a hanger-on who loved living a lifestyle of the rich and famous without paying for it. 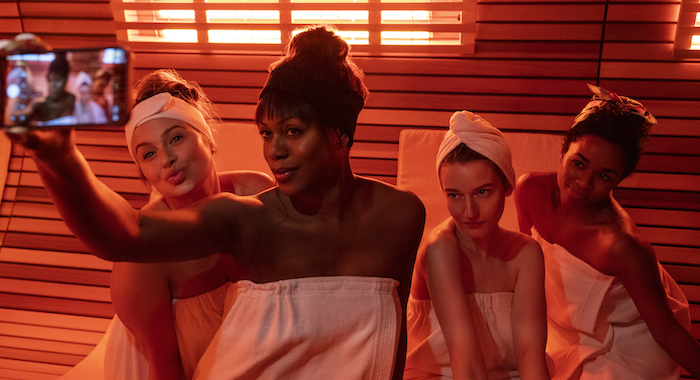 Cox and her real-life counterpart bonded after a workout session and four-hour lunch (she was definitely sore from the workout the next day). Floyd and hers also met and that Neff “was very trusting and generous with her story … [how she] felt seen and celebrated by Anna in a really unique way and at a unique time …. [when] she’s working in this job where she has all the keys to the kingdom but is never allowed to use them.”

But Lowes didn’t meet the real Rachel before filming. She said that the character was “inspired by Rachel DeLoache Williams” and that this is “the character she needed her to be in this story.” Lowes said that, while she did look at the Williams’ social media account, “I actually based her on somebody else I know … I don’t think in this series, you’re meeting the Rachel DeLoache Williams who she is now. You don’t think you’re meeting the Rachel Williams who she was 10 years ago; you’re meeting her when she’s in New York City and gets conned by a con artist.”

But is Delvey actually a con artist in the traditional sense of the word? Yes, she stole and lied and fabricated. But con artists usually collect the funds and run. In the version both in this limited series and in Pressler’s article, she also had a strong vision to build something and was almost in denial that it wasn’t happening. 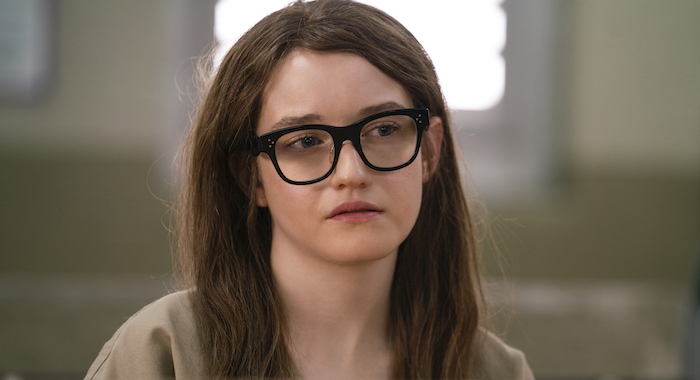 “Anna needed to believe that she was who she says she was,” Cox said after pondering whether Delvey falls under the definition of “con artist.” “That’s who she needed to be for her own sanity … there was a such a desperation to be successful.”

64% Inventing Anna: Limited Series (2022) premieres on Netflix on February 11, the one-year anniversary of when Anna “Delvey” Sorokin was released from prison (a month later, ICE took her into custody for overstaying her visa).