Nine years after ending his ratings-dominating TV show and
walking away from the public limelight,
Jerry Seinfeld is everywhere again. You
probably saw the comedian on primetime with his absurdist teasers (called "TV
Juniors") or in a guest role on 30 Rock, all to increase visibility for his new
film, Bee Movie,
opening this Friday. For Dreamworks’ second animated film of 2007 (after
Shrek the
Third), Seinfeld voices Barry B. Benson, an idealistic bee who takes humanity to
court for withholding profits from our wanton honey consumption. Rotten Tomatoes
spoke with Seinfeld during a roundtable conversation in San Francisco,
discussing the process of animation, voice-over work, and diving off French
hotel rooftops.

So why animation over live-action?

Jerry Seinfeld: Because I had done so much of that on the TV series. I
had made 90 hours of programming. You cut that up, that’s like 45 movies. So
there was no movie that seemed exciting to me. "Yeah, I know, they give you the
script, you stand over here…" I don’t know…it just wasn’t exciting.

But [then] I saw this whole technology, and the look of it
is so different. I thought, "Gee, what if we took that look but [made them] talk
like I want them to talk, maybe that would be something interesting." I just got
excited about it.

Did becoming a father have something to do with it?

JS: No. [Laughs] I just wanted to do something different.

[But] it is funny how it worked out. I have three kids —
six, four, and two. Of course, I know all their friends so now I know millions
of kids. And I realized these kids are going to go nuts [over Bee Movie].
Sometimes when their friends are over I show them little clips on the computer
that I’m working on for whatever reason. And they’ll come in and they’ll watch
it. They go nuts. It’s so fun. There’s nothing more fun than entertaining kids.

Do you find there’s a big difference in the kind of
comedy you have to invent between mediums?

JS: There’s a big difference. Sometimes you can do certain
things on stage, or even in a TV series, and people see the look on your face
and they know what you mean, so you can get away with certain things. But if you
can’t create that look on an animated character, which is essentially a puppet,
the line will hit the audience in a very bad way.

This is the great advantage that you have doing a TV
series. Say, for example, my series — which is the only one I know anything
about — by year four, we knew exactly what this thing ate, when it wanted to go
out, how it liked to be petted. What it liked and what it didn’t like. And what
makes a movie so challenging — so much more challenging than a TV series,
frankly — is that you never get that opportunity. Because you make a TV show
and you put it out there and you get a reaction. You go, "Okay, this work. This
doesn’t work." You put out another one. "They like this. They don’t like this."
But with a movie, you get one shot at it. Even though you have test screenings,
pretty much, we’re going to put this lemur in people’s living rooms. And, just,
bang, they’re going to react to it. I hope I didn’t over-answer your question.
[Laughs]

This is one of my big things of creative pursuits. You have
your idea you want to do, but then you got to figure out what does this thing
want to be? You got to let it lead you a little.

And how were the test screenings?

JS: Well, you know, I like to try anything. So we would have
some horrible ones. We’d try crazy things just to see how they reacted. Some of
the work, some of them don’t. Comedy is a very scientific exploration. You have
to do the experiments to find out what the formulas are.

How much did you put yourself into the character of
Barry?

JS: How much? As much as I have. I don’t really know how to
do it any other way. I think in a TV series I could be a little more obnoxious.
This character in this movie is never obnoxious. He’s a little nicer than I am.
So I actually took a little of myself out.

How much of Bee Movie is yours? Is it a collaborative
effort between you and Dreamworks or do you feel that this is entirely your
vision?

JS: There’s nothing "entirely." You have 350 people working
on this thing. [But] I would say the tone, the comedy of it is mine. Even though
I work with writers, I’m in charge of what goes in the script and what doesn’t.
Win or lose, [that] is my thing.

How involved were you with the casting of the other
voices?

JS: I was involved in every single aspect of everything. [Laughs] From the cars
they drove, to the ties they wore, to the desks they sat at. Not to say that I
came up with it all, but it was brought to me. "Do you like it like this? Do you
like it like that?" All day, every day. It was ridiculous. [Laughs.]

Was there a lot of ad-libbing in Bee Movie?

JS: Some of it we’d use, some of it we didn’t. We had a
scene about [Renee
Zellweger‘s character] trying to have coffee with [Barry]. We
read the scenes a few times and we got all the lines. So I said, "Okay, just try
to get me to have coffee. Just keep pushing me to have coffee and I’m going to
say, ‘Nah, I don’t want any.’" And a lot of that made it into the movie. It
gives it some life if you do it that way.

Were the TV and movie teasers your idea?

What did you do different from other animated movies?

JS: Some of the way we recorded dialogue was different. The
jokes that we make are different. It’s got its own personality. It definitely
does not feel like a slice off of the same loaf. Certainly, [not like] all these
animal movies, which, believe me, I’m as sick of as you are.

During the Cannes Film Festival, I heard you jumped
off a hotel, and dived eight stories into a pool.

JS: You just heard about it? You should check on
that. [Laughs]  It was a little nutty. But I was told that during the Cannes
Film Festival, people do crazy things. You know,
Sacha Cohen did that crazy
thing on the beach. Did you hear about that? You have a computer, don’t
you? [Laughs] 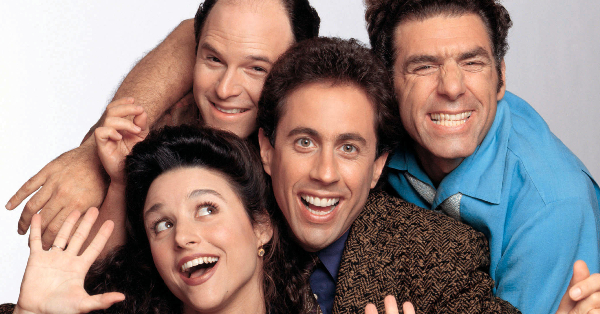 Hear Us Out: The Seinfeld Series Finale Was Actually Pretty Great