This week’s Ketchup brings you more headlines from the world of film development news, covering such titles as Attack the Block 2, Joker: Folie a Deux, and Road House. 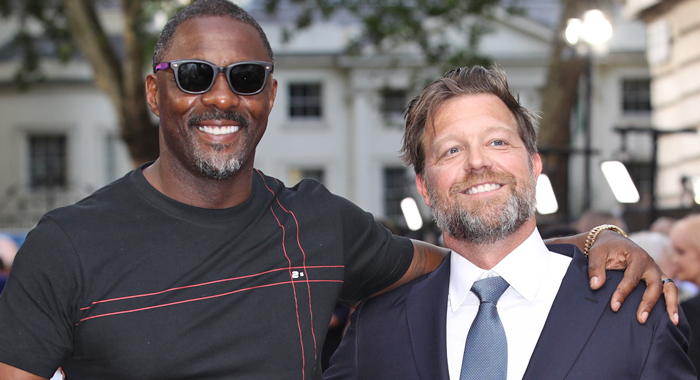 The world is still waiting for casting news for Ta-Nehisi Coates’ Superman reboot that was announced last year, but in 2019, Idris Elba did get to proclaim in Fast & Furious Presents: Hobbs & Shaw (Fresh at 67%), “I’m black Superman.” It’s very unlikely that he’ll be returning to that role (for several reasons), but that doesn’t mean there won’t be a thematic Hobbs & Shaw follow-up for him. Idris Elba and Hobbs & Shaw director David Leitch (Deadpool 2, Atomic Blonde) are now both signed with Netflix for a spy thriller called Bang! based on the 2020 Dark Horse Comics series of the same name. Elba will star as a world famous super spy who is assigned to bring down a terrorist cult attempting to start the apocalypse by brainwashing the readers of a series of popular novels. The screenplay was adapted by Bang! comic book writer Matt Kindt and screenwriter Zak Olkewicz (co-writer of Fear Street: Part Two – 1978), the latter of whom also adapted this week’s Bullet Train for Leitch. Idris Elba is set to appear in two new movies this month, first in the lion attack thriller Beast (8/19/2022) and then in Mad Max: Fury Road director George Miller’s Three Thousand Years of Longing (currently Fresh at 62%) (8/26/2022).

In June, the news broke that Lady Gaga was negotiating with Warner Bros. to join the comic book musical Joker: Folie à Deux, the sequel to the 2019 film Joker (Fresh at 68%), for which Joaquin Phoenix won a Best Actor Academy Award. At the time, pretty much everyone presumed that Gaga was in talks to play the Joker’s great love, Harley Quinn, but it wasn’t technically confirmed. On Thursday, she took to Twitter herself to confirm that yes , indeed, she has joined Joker: Folie à Deux as Harley Quinn. This came soon after the Wednesday news that Warner Bros. has scheduled the musical sequel for October 4, 2024, which is exactly five years after the October 4, 2019 release date of the first Joker. As for the reason why Joker: Folie à Deux has that unusual title, the subtitle refers to a psychiatric disorder in which two people (in this case, Joker and Harley Quinn) share the same psychosis, delusional belief, or hallucinations. Joker: Folie à Deux will also reunite Lady Gaga with director Todd Phillips, who produced her Academy Award nominated feature film debut in A Star is Born (Certified Fresh at 90%).

Earlier this summer, when some movie fans first saw Tom Cruise’s Top Gun: Maverick (Certified Fresh at 96%) in theaters, they may have mistakenly thought that the trailer for Mission: Impossible – Dead Reckoning, Part One (7/14/2023) was telling them that it was opening this July, but the film is actually still almost a year away from release. If that promotion seemed early, then this week’s news about the casting of the next movie after that, Mission: Impossible – Dead Reckoning, Part Two (6/28/2024) may seem even more so. Most of the franchise’s ensemble cast is expected to return for Part Two (except, of course, anyone who might not survive Part One), and we now know that the eighth film in the franchise will also see the addition of two new cast members. In new images from the currently filming set, Nick Offerman (Parks and Recreation) can be seen in some sort of military dress uniform, along with Janet McTeer (Albert Nobbs), as well as the recently announced Holt McCallany. As for whether Tom Cruise will ever return for a ninth movie in the Mission: Impossible franchise, director Christopher McQuarrie was quick this week to (possibly) debunk such reports.

Many movie fans may have first seen British actor John Boyega as Finn in Star Wars: The Force Awakens (Certified Fresh at 93%) in 2015, but his feature film debut was actually as the lead in the 2011 monster action comedy Attack the Block (Certified Fresh at 90%). That movie may now be well over a decade old, but Boyega revealed this week that a sequel is now in active development by posting the cover image of the Attack the Block 2 screenplay. Screenplay covers usually list the screenwriters’ names, but this stylized cover page does not. It is, however, likely that director Joe Cornish will be returning to direct the sequel, so he may have written it as well. Cornish’s credits as screenwriter also include The Adventures of Tintin (Certified Fresh at 74%) and Ant-Man (Certified Fresh at 83%). In related news, John Boyega also told Variety this week that he has no plans to join the Marvel Cinematic Universe, so that he can focus on “new, fresh ideas” (like an Attack the Block sequel, presumably).

4. TOM HARDY AND ELVIS STAR AUSTIN BUTLER ARE THE BIKERIDERS

Last October, director Jeff Nichols (Mud, Loving) exited the A Quiet Place spin-off (whcih is now called A Quiet Place: Day One, with Pig director Michael Sarnoski attached, and scheduled for September 22, 2023). Almost a year later, we now know what Nichols has lined up to direct next. Tom Hardy, Jodie Comer, and Elvis star Austin Butler are now set to star in The Bikeriders, a fictional story inspired by the real life photography of Danny Lyon’s 1967 book The Bikeriders, which documents the looks and lives of 1960s Midwestern motorcycle clubs. The Bikeriders will show how a motorcycle club in the 1960s “evolves over the course of a decade from a gathering place for local outsiders into a more sinister gang, threatening the original group’s unique way of life.” Filming of The Bikeriders is expected to start in October, after Austin Butler wraps up his role as Feyd-Rautha Harkonnen in Dune: Part Two (11/17/2023).

Although it seems like the the films of the 1980s have been subject to remakes and reboots since almost since they ended, Hollywood is not yet entirely done revisiting the decade, as was made clear by the news of two reboots of 1989 movies this week. One movie from late 1988 (mostly released in 1989) that might seem to have diminished in the pop culture consciousness a bit is the office comedy Working Girl (Certified Fresh at 85%), starring Melanie Griffith, Sigourney Weaver, and Harrison Ford. Someone who is apparently a fan of Working Girl is Only Murders in the Building star Selena Gomez, who is now in final negotiations with 20th Century Studios to produce a Working Girl reboot. First-time screenwriter Ilana Pena is currently adapting the screenplay. It’s not yet known if Selena Gomez plans on starring in the new film (possibly in the title role originally played by Melanie Griffith).

Not every film now considered a classic was necessarily a hit when it was first released. That is definitely true for the Patrick Swayze action comedy Road House (Rotten at 37%), which in 1989 had a fairly average domestic box office of just $30 million, landing it at No. 44 for the year (in between Weekend at Bernie’s and Disney’s re-release of Peter Pan). MGM has been developing a Road House remake for some time, which is now being produced for MGM’s new corporate cousins at Amazon’s Prime Video. Patrick Swayze, Sam Elliott, and Kelly Lynch starred in the original, but this reboot directed by Doug Liman (Edge of Tomorrow, Mr. and Mrs. Smith) is not a direct remake, allowing for a new batch of characters. In the reboot, Jake Gyllenhaal will star as a former UFC fighter who takes a job as a bouncer at a “rough and tumble” road house in the Florida Keys. Gyllenhaal’s co-stars will include Daniela Melchior (Ratcatcher II in The Suicide Squad), Billy Magnussen, B.K. Cannon, Arturo Castro, Dominique Columbus, Lukas Gage, Gbemisola Ikumelo, Beau Knapp, Hannah Love Lanier, Bob Menery, Travis Van Winkle, and real life two-time UFC champion Conor McGregor. In related news, director John Woo is also now set to remake his own cult classic The Killer (Certified Fresh at 98%) for Peacock with French actor Omar Sy (The Intouchables) taking over the Chow-Yun Fat role.

In the last year, Lashana Lynch has had spoilery roles in not one but two major franchise films, first in the COVID-delayed No Time to Die (Certified Fresh at 83%) and then in Doctor Strange in the Multiverse of Madness (Fresh at 74%). For her next film, Lynch has landed a major role in a completely different type of long-awaited film, as she will portray Rita Marley (née Anderson) in the untitled Bob Marley biopic, about the life of the legendary Jamaican musician who rose to great success in the 1970s. Lynch joins the already cast Kingsley Ben-Adir (who is playing Bob Marley) for director Reinaldo Marcus Green, who landed the biopic after delivering last year’s Academy Award winner King Richard (Certified Fresh at 90%). Lashana Lynch, who was born in England but whose family is from Jamaica, earned the role as Rita Marley after an exhaustive casting call similar to the search for their Bob Marley. With the two leads, the untitled Bob Marley biopic will now most likely focus on casting the many people in Marley’s life.

Like the aforementoined Austin Butler, Dave Bautista is currently filming his role in Dune: Part Two (11/17/2023), and also like Butler, he’s already lining up his next role. Bautista is in talks with Netflix to star in their canine buddy cop comedy Unleashed, with director Jeff Tomsic (Tag) already attached. The story centers on a police officer who is forced by tragedy (presumably this isn’t a spoiler since it’s the film’s premise) to find a new canine partner. The Unleashed screenplay was written by the screenwriting team of Jim and Brian Kehoe, who also wrote Blockers (Certified Fresh at 84%). Dave Bautista will next be seen in Netflix’s Glass Onion: A Knives Out Mystery this fall.

9. THE SHOCKING SHELVING OF BATGIRL AND ITS AFTERMATH

For decades, the movie industry has had an extensive “ancillary” system of cable, TV, home video, and now streaming that almost always guarantees that fans will eventually be able to see any film they want, somehow. This assumption is so baked into fan culture that it came as quite a shock this week when Warner Bros. Discovery announced that the already filmed $90 million superhero movie Batgirl and the mostly finished $40 million animated sequel Scoob!: Holiday Haunt have both been scrapped and will not be released on any format, ever. (You can read all about it here.) The reasons given for the unusual decision is that they don’t fit the strategic shift that is underway at the recently merged Warner Bros. Discovery. Specifically, the new goal for Warner Bros. films is a return to a focus on theatrical releases (a shift from a focus on HBO Max exclusives), which reportedly includes the end of the 45-day window, allowing some Warner Bros. movies to stay in theaters much longer than we’ve seen in 2020, 2021, and 2022. As fans react to the Batgirl news, previous decisions earlier this year, like the cancelling of the Wonder Twins movie and the casting of Ben Affleck in Aquaman and the Lost Kingdom (apparently replacing Michael Keaton’s filmed appearance in that film) now have additional context. There are also those DC Comics movies like Supergirl that had been in development for HBO Max but hadn’t begun filming yet. The focus on theatrical may also have been behind the decision this week to stealth-retire six of the recent “Max Originals” from HBO Max, namely An Americna Pickle, Charm City Kings, Locked Down, Moonshot, Superintelligence, and The Witches. Finally, in related news, HBO Max and Discover+ will relaunch as a combined streaming service in the summer of 2023. Warner Bros. is also implementing a 10-year plan for their DC Comics superhero movies to match the extensive strategies used by Kevin Feige and Marvel Studios for their Marvel Cinematic Universe.