How True-Crime Horror Story The Act Came to Life

Star Chloë Sevigny and creator Nick Antosca tell Rotten Tomatoes about fictionalizing the horrific true tale at the center of their new series.

Stars. They’re just like us: also deeply fascinated by true-crime stories, like the one at the center of The Act. The series, which is Certified Fresh at 92% on the Tomatometer, is based on a Buzzfeed News article by writer Michelle Dean called “Dee Dee Wanted Her Daughter To Be Sick, Gypsy Wanted Her Mom Murdered,” which was subsequently turned into the HBO documentary Mommy Dead and Dearest. The Act star Chloë Sevigny was so engrossed by the documentary that she watched it twice in a row.

“I was so flabbergasted,” Sevigny told Rotten Tomatoes — a natural reaction to hearing the full story of Dee Dee and Gypsy Blanchard. 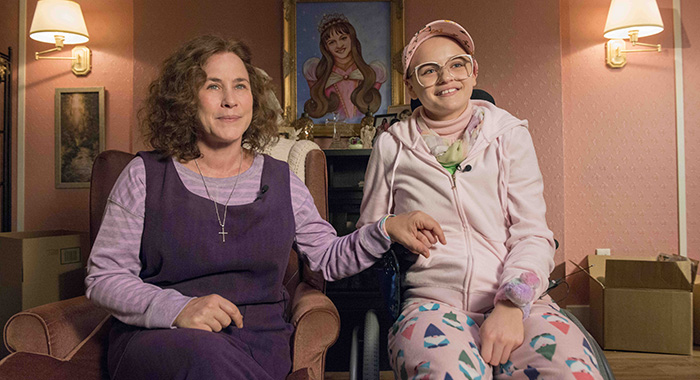 On the surface, Dee Dee (played in The Act by Patricia Arquette) seemed to be a devoted mother caring for her incredibly sick daughter, Gypsy (Joey King). In reality, it turns out that Dee Dee suffered from Munchausen by proxy and forced her daughter to shave her head, use a wheelchair, and undergo unnecessary medical treatment. Eventually, Gypsy (and her secret online boyfriend) killed Dee Dee.

Channel Zero creator Nick Antosca, who created the series alongside Dean, said of the many questions he had after reading Dean’s story, there was one that was most important to answer when turning the saga into a scripted drama.

“How does this happen in real life? The important thing for me to explore in working on the show was what was that experience like,” Antosca told Rotten Tomatoes. “What was it like for Gypsy to live in that house for all those years, and participate in the deception that has so many layers? It’s such a complicated experience, and that was the most important thing to dig into for me. And, also, to be accurate about what happened: the fact that she underwent all these medical procedures, that she had her teeth extracted, she had this feeding tube, that it was medical abuse on a day-to-day basis. It was important that we portray the truth of what happened to her.” 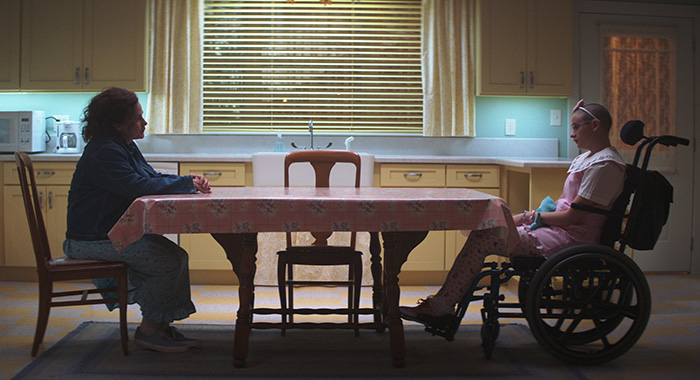 Antosca came to the project from the horror world, having created Syfy’s horror anthology Channel Zero and written several episodes of Hannibal.

“My experience is in horror, but it’s always human horror, and that’s what I’m interested in: human horror, psychological horror,” he said. “I don’t feel like I was playing in a completely different sandbox here than I was with Channel Zero or Hannibal, because great horror always puts character and psychology first. And The Act, on some level, is a profound psychological horror story.”

It’s also grounded thanks to Dean’s extensive research on Dee Dee and Gypsy’s lives and medical records that became her thorough 8,500-plus word article. Since the facts are so well-documented, the story isn’t treated as a mystery, but rather more of a character study.

“The story is so widely read that this show can’t be a mystery in a traditional sense,” he said. “Not whodunit. It’s more existential than that. It’s how could this happen, and what was it like to live through that? As a storyteller, and as a viewer, and as a reader of an article, that’s what is really interesting to me and compelling to me.” 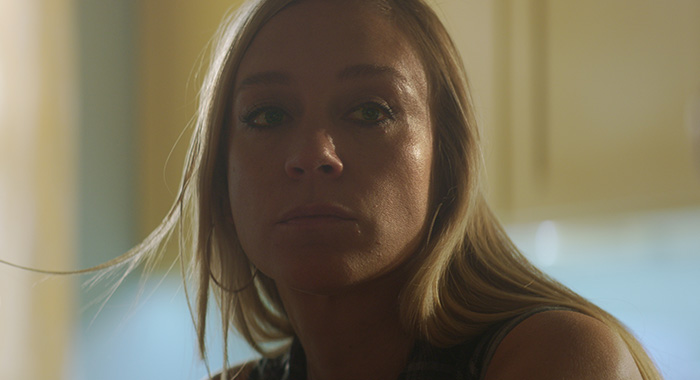 Arquette and King portray the mother and daughter at the center of the story, and both underwent serious physical transformations for the role (including King shaving her head).

“For Dee Dee, we needed somebody who obviously had incredible range, but also who could be very grounded and human while playing this woman who did monstrous things,” Antosca said. “So we didn’t want her to worry about being likable, but she had to have an inherent humanity.”

“The challenge was that truth is stranger than fiction, and this story, there’s so much there,” she said. “That’s why it was exciting that we got to do eight hours of a deep delve into these characters and these people’s relationships.”

Sevigny had to make her character as relatable as possible, especially in the middle of such an unbelievable story.

“When you think about Chloe’s roles, they’re so diverse. From Kids to Zodiac, she plays so many different kinds of people,” Antosca said. “We felt like for the neighbors — when you hear this story, you go, ‘How could people have been fooled? How were they so dumb?’ And the fact is that they weren’t [dumb]. They were just regular people like you and me, and if our neighbor said ‘My daughter’s sick and she’s in a wheelchair,’ you wouldn’t question it. So it was important that the neighbors, who are basically the audience’s surrogates, be real, regular people who are perceptive, and smart, and just trying to live their lives while this deception is going on right under their noses, so that we feel their sense of betrayal once the truth comes out.”

Sevigny, who won a Golden Globe for her role in Big Love and makes a case for more trophies here, also drew inspiration from family members in other true-crime documentaries.

“I did a whole binge of Making a Murderer when it first started, and I was thinking a lot about the aunts and cousins and different women you would see in some of the footage,” she said. “Just the women in those parts of the country that are so hard-working and can’t catch a break and how they’re so hardened by their circumstances, and I was trying to infuse Mel with that kind of person that you see in those sorts of documentaries.” 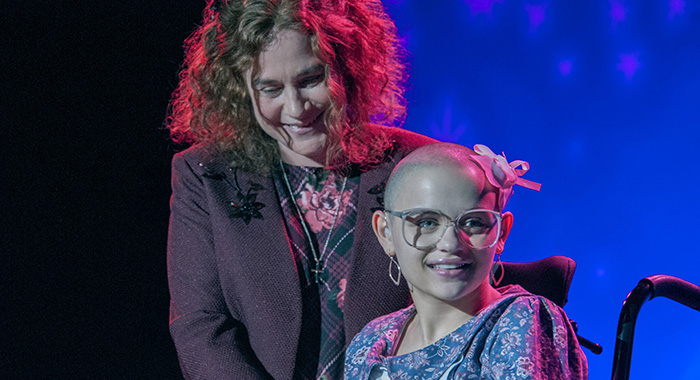 While Gypsy might appear to be the sick one, the truth is that Dee Dee suffered from Munchausen syndrome by proxy, where a caregiver makes up or even causes illness in their ward. It’s a disease that has been portrayed in pop culture before (most recently in 2018’s HBO miniseries Sharp Objects), and it’s something that can quickly turn from relatable quirk to disturbing affliction.

Dean found in her research that some scientists believe “there was a spike in Munchausen once the Internet came around and people could look up reams of medical information at home in front of the television,” she told reporters on a Television Critics Association panel about the series in February. “And I think we’ve all had that experience where you’re having an ache or a pain and you go on WebMD and you think, ‘Oh, I have cancer.’”

And the way Munchausen moms in particular suffer from the illness means that there’s also still that natural instinct to protect and care for their child, and sometimes their lies take over what they rationally should know to be the truth.

“In order to be a successful fraudster you usually have to believe the fraud. You fall for it yourself,” Dean said during the panel. “I think actually that’s the answer to the question, “Why are people so intrigued by Munchausen?” It’s the question of, does the mother really believe that the child is sick or not? And in speaking to Munchausen experts, we learned they don’t know the answer to that question either.”

But why is pop culture so interested in Munchausen by proxy now?

“I think it’s part of our ongoing fascination with motherhood, what a mother should be. The mother as a monster sometimes,” Antosca told Rotten Tomatoes. “And I think it’s a role that incredibly complicated to explore. We all have interesting and complicated relationships with our mothers. Every mother makes mistakes, and does the wrong thing out of love sometimes, and this is such an extreme example of that. I think it’s universally fascinating.”

The Act was ordered at Hulu as an anthology series, but Antosca said he isn’t necessarily sure he has the right idea for another season just yet.

“Honestly, I pursued this show and wanted to make this show because of Dee Dee and Gypsy’s story. If we do another season, it would have to be another really complex human relationship. I’m not interested in doing a story about a murder, or about a crime. It has to be about the people behind the crime,” he said. “So I would love to do another season. I don’t know what it is yet. I’m completely focused on the first one now. We’re still editing the last couple episodes, but if we did another season, it would have to be about regular people in America searching for the American dream and going to a very dark place because of it.”

Sevigny has moved between film and television for nearly her entire career, and she’s planning to continue doing that. In 2019, she appears in Netflix series Russian Doll in addition to The Act, as well as several feature films, including Jim Jarmusch’s The Dead Don’t Die with Adam Driver and Tilda Swinton — “It’s a zombie comedy. Also Selena Gomez is in it,” she said. She also submitted a short she directed to Cannes, and is currently filming Queen and Slim, directed by Melina Matsoukas and written by Lena Waithe and James Frey.

“I love making movies, and I hope forever to make movies,” she said. “It’s nice, though, that there’s so much challenging work being made for TV and I hope to continue to work on great projects like I have been. I like cruising between the two. And also directing. I’ve directed a few shorts now and am hopefully going to develop a feature this year.”

Hulu releases new episodes of The Act every Wednesday.