Hollywood Legend Debbie Reynolds Reflects On her Life in Showbiz

The star of stage and screen tells RT about her favorite films and co-stars.

Few stars from Hollywood’s golden era have stayed in the spotlight as long as Debbie Reynolds. Ever since her breakout performance opposite Gene Kelly in 1953’s Singin’ in the Rain, Reynolds has seemingly done it all; she was nominated for a Best Actress Academy Award for The Unsinkable Molly Brown, she starred alongside some of the silver screen’s biggest names, she’s been a memorable TV performer (recently, she turned up in a strong recurring role on Will and Grace and a voice actress (her credits include Rugrats and The Family Guy. In addition, she still tours behind her stage show, in which she sings standards, tells jokes, and does impressions. And she survived one of the biggest Hollywood scandals of the 1950s: losing husband Eddie Fisher to Elizabeth Taylor (she and Taylor have since patched up their differences).

Reynolds is currently promoting the Warner Archive collection, which will make available 150 movies on DVD and OnDemand from the company’s 85-year history, including Reynolds’ 1959 comedy The Mating Game. In an interview with Rotten Tomatoes, Reynolds talked about her passionate cinephilia, her favorite costars, her tight relationship with her daughter Carrie Fisher, and why she’ll never quit show business.

The first thing we usually ask people is, what are your five favorite movies?

Debbie Reynolds: Oh, I really can’t answer that off the top of my head, my favorite movies. So… Dark Victory, For Whom the Bell Tolls, Gone With the Wind, The Pink Panther… Each one individually was wonderfully made, wonderfully directed, wonderfully written, wonderfully acted, and each one was entirely different, you know? And I love each one of those actors, Bette Davis, Ingrid Bergman — and I loved Gaslight; I loved Ingrid Bergman in that. I like romantic movies. I sort of go for the older movies. I liked the Pirates of the Caribbean because I thought Johnny Depp was adorable. I like Sleepless in Seattle, because I like a romantic movie. So there’s some.

In Singin’ in the Rain, you play the character who’s read all the movie fanzines and knows all about the stars. Was that you before you actually made it into the movies?

DR: I’m just a movie fan. I used to go to the movies just to watch movies. I never dreamt of being in the movies. I was from a very average, I would say, a rather poor family, so my big treat was to work hard all week — I mowed lawns and babysat and washed dishes and washed cars — to go to the movies. I loved going to films, but as far as a movie buff, when I came into the movies at 16, life changed a little bit for me, from an onlooker to a person that lived within the industry. So now I would call myself a different sort of fan.

Reynolds in How the West Was Won.

You’ve accumulated a lot of movie memorabilia over the years, right?

DR: Yes, I started in 1970 at the MGM auction, and the Fox auction five years later, then the Columbia auction, and subsequently to private collectors and different auctions. I have over five thousand costumes and props and cars, and I have a twenty-five thousand square foot warehouse full of memorabilia.

Is there anything in there that you particularly treasure? If the building was on fire, what would be the one thing you’d save?

DR: Well, I don’t even like to say that word, because I would hate to think about that. But my favorite is Marilyn Monroe’s subway dress, the white dress, the ruby red slippers, and the gingham dress of Judy Garland. Streisand’s dress from Hello, Dolly!; Garbo’s dress from Ninotchka; Katharine Hepburn’s dress from The Philadelphia Story; the Maltese Falcon…

You have the actual Maltese Falcon?

Wow… Are there any plans to display all this stuff?

DR: We’re building a museum in Pigeon Forge, Tennessee, which is next door to Dollywood, which is Dolly Parton’s place. So we hope to open that in 2010. We were going to open it this year, but because of the economical problems, plans were pushed back.

You’re the spokesperson for this Warner Archive project. I saw The Mating Game was one of the movies that’s being released in this collection. Are there any more of yours in there?

Is that one of the key ways the business has changed since you started, the way people see movies now?

DR: Well, of course, I wasn’t wattching television when I was a youngster; there was the radio. And then there was, finally, VCRs, and now DVDs. And so people can see them at home, run them individually, whereas before you had to go to a motion picture theater. Now, I think it’s the opposite, I think people want to stay home and run movies with their whole family at home. It become a family hobby instead of going out to the theater, sad to say. But I think it’s very good because it reaches millions that would never see these movies.

Reynolds (center) with Donald O’Connor and Gene Kelly in Singin’ in the Rain.

I was watching Singin’ in the Rain recently, and there’s something so effortless about the chemistry you have with Gene Kelly onscreen; it has a lightness to it. And then I read that you said that was one of the hardest things you’ve ever had to do in your life. Why was that?

DR: Well, anything worthwhile is hard, and dancing is very hard, and if you’ve ever studied dancing of any kind, you’d know that to be in precision, three people dancing together… Donald O’Connor and Gene Kelly were trained dancers; I, who was not a trained dancer, to train hard enough to keep up with them, was very, very difficult and demanding. So it was a real task for a real person of 17 years of age, who had never danced before, to learn to keep up with these brilliant dancers. I think I did a good job.

What movie that you’ve made do you treasure more than the others?

DR: Well, I like The Unsinkable Molly Brown for me as an actress, because I was older and I was a better actress than I was in Singin’ in the Rain. But as far as a better movie, it was Singin’ in the Rain. And then How the West Was Won, I think I was better in that as far as a better actress is concerned. You know, as you train and as you develop your talents, you do get better, hopefully, or you get out of the business.

Next: Reynolds talks about her favorite actors, and why Hollywood scandals are different these days. 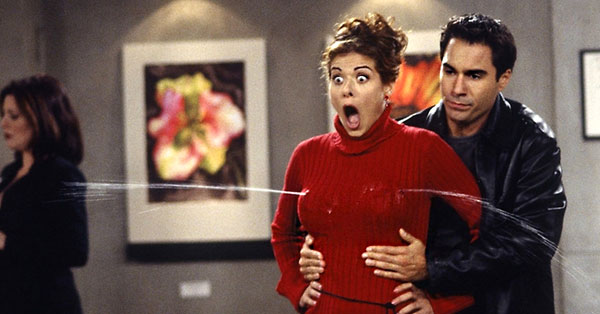