Plus, Missing Link is another Laika triumph, Little is slight, and Fosse/Verdon season 1 is Certified Fresh.

This weekend at the movies, we’ve got a snarky superhero (Hellboy, starring David Harbour and Milla Jovovich), a personable primate (Missing Link, featuring the voices of Zach Galifianakis and Hugh Jackman), the opposite of Big (Little, starring Issa Rae and Regina Hall), and a coed romance (After, starring Josephine Langford and Hero Fiennes Tiffin). What are the critics saying? 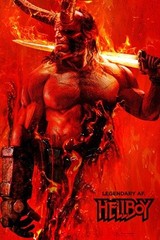 Back in 2004, Guillermo del Toro had arguably his first true mainstream success with an adaptation of a Mike Mignola comic series about a half-demon superhero with a dark sense of humor; that movie was Certified Fresh and went on to spawn an even better-reviewed sequel. Fifteen years later, we get a reboot of the character, with Stranger Things‘ David Harbour taking over for Ron Perlman in the title role, and the reviews have been less than kind. Neil Marshall, the director behind celebrated fan-favorite horror flick The Descent, steps behind the camera here, recounting Hellboy’s origins and setting him against a centuries-old sorceress who just wants to make demon babies with him and rule the world. Unfortunately, critics say Hellboy certainly earns its R rating, but not necessarily in the right ways, mistaking F-bombs and mindless gore for humor and imagination. It’s an unfortunate reimagining of a normally fun character that strands him in a messy, poorly constructed story, then drowns him in blood and severed limbs and hopes the audience won’t notice. 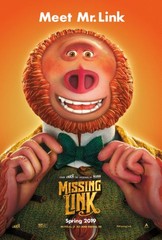 Animation studio Laika has put together an impressive string of acclaimed stop-motion projects, beginning with 2009’s Coraline and including, most recently, 2016’s Kubo and the Two Strings. So far, their latest film looks like another triumph. Zach Galifianakis provides the voice of a sasquatch-like creature living in the Pacific Northwest who meets an inquisitive adventurer (Hugh Jackman) and asks him to help him locate a rumored city of his Yeti cousins in the Himalayas. Along the way, they pick up a feisty ex-girlfriend (Zoe Saldana) of the adventurer and visit exotic locales en route to Asia. Critics say Missing Link benefits from exquisitely crafted sets and a pleasant, easygoing vibe that, for a change, doesn’t rely on life-or-death stakes and chooses instead to focus on the budding friendship at its center. It’s an agreeably understated family film that looks beautiful and should inspire a lot of smiles. 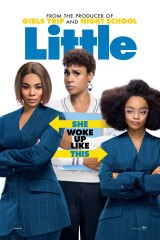 Remember that Tom Hanks movie from 1988 about a 12-year-old boy who makes a wish and turns into an adult overnight? That movie was Big, so it makes a lot of sense that a similar movie whose plot is basically the same thing in reverse would be called Little. Regina Hall plays a ruthless, verbally abusive CEO who crosses the wrong tween and, thanks to a magic curse, wakes up one day to discover she’s reverted back to her 12-year-old self (played by Marsai Martin). Insecure‘s Issa Rae co-stars as the put-upon assistant who’s not only tasked with figuring out a solution to the predicament, but also with shepherding her de-aged boss through middle school again. Critics are split on Little, which feels a bit safer and lighter on laughs than many would have liked, but which also features some outstanding performances and a few worthy lessons. It may strike some as familiar, but it may be light and breezy enough win over some fans. 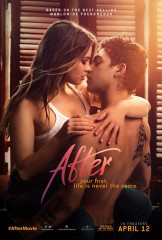 Hollywood is constantly on the hunt for the next literary property they can turn into a franchise, and this week’s After is the latest example. Based on a best-selling novel that began as a series of posts on the internet publishing platform Wattpad, the film follows a young woman (Josephine Langford) who enters college, falls for a rebellious classmate, and begins to question her relationship with her high school sweetheart. It’s the basic template for any young adult-focused romance, in other words, but since it wasn’t widely screened for critics, we can’t really tell you what they think about the movie. Time to guess that Tomatometer!

Sam Rockwell and Michelle Williams give viewers plenty of razzle and dazzle in Fosse/Verdon — a straightforward miniseries that is hampered by rote biographical tropes, but still shimmies with the requisite glitz, grit, and all that jazz audiences crave.