Harley Quinn Is 'Very Much Not for Kids,' Say Animated Series' Producers

Supervillain's potty mouth in episode 1 of DC Universe show is meant to shock.

The first two minutes of DC Universe’s Harley Quinn features one of the most profanity-laden screeds ever uttered by a DC Comics character. But it is also a statement of purpose executive producers and showrunners Justin Halpern and Patrick Schumacker told Rotten Tomatoes was necessary to set the show apart from other animated offerings.

“We were really concerned about people thinking maybe the show is for kids,” Halpern said. “We wanted to come out strong in the first couple minutes and make it very clear that the show was an adult show and it very much is not for kids.” 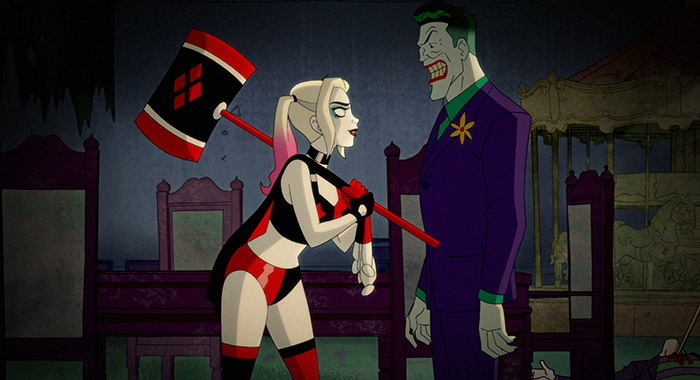 With its occasional potty-mouth, outrageous cartoon violence, and focus on villains like Harley Quinn (Kaley Cuoco), Poison Ivy (Lake Bell), and King Shark (Ron Funches), Harley Quinn is a different kind of animated DC cartoon. Like Halpern and Schumacker’s previous DC Entertainment effort, the short-lived sitcom Powerless, it refocuses fantastic concepts into everyday life, but unlike that show, the mundane comes to singular characters like Harley and Lex Luthor; in fact, it begins with one of the most common heartaches people experience: a breakup. This breakup, however, features Harley and the Joker (Alan Tudyk).

“We wanted to structure the first season as a prolonged breakup story, dealing with the post-breakup and how you remove yourself from underneath the specter of your ex who has sucked all the air out of the room and is the superstar of the relationship. The [person] everybody thinks about first,” Halpern explained. 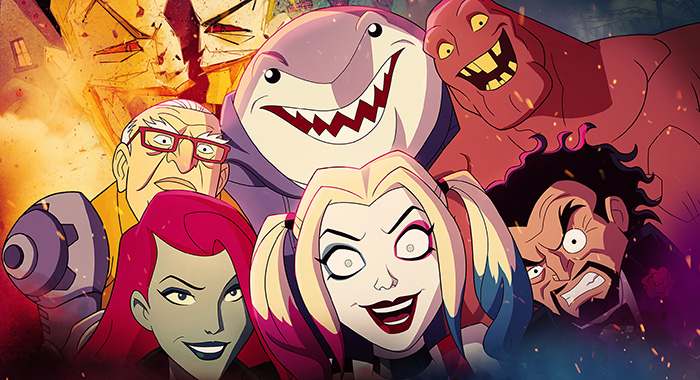 Set against the breakup is Harley’s attempt to join the Legion of Doom and prove she’s more than the Joker’s girlfriend. To that end, she forms a crew of her own comprised of some great DC Comics misfits.

“We take it in think a different direction than the comics have taken it,” Schumacker added. “In the current version you have her living in Coney Island with a cast of newer characters. We wanted to use [more] established characters in the Batman and Gotham City sandbox, as well as characters like Dr. Psycho, a classic Wonder Woman villain who becomes part of Harley’s crew.”

Psycho (Tony Hale) joins the team alongside Clayface (also Tudyk), who in turn invites King Shark to handle IT support.

Both have some presence on television thanks to Batman: The Animated Series and The Flash, respectively, but the characters have some new quirks thanks to the Harley Quinn writers and the performers themselves.

“We knew that we wanted to portray Clayface as this sort of erudite, Juilliard reject. A self-serious ‘act-or’ with a capital-A, and Alan knows [how to pull that off],” Schumacker said. “All you have to do is say, ‘Kind of like a Juilliard, Mid-Atlantic accent. Go.’”

Funches, meanwhile, was the perfect voice for an “excitable” and more verbal take on the comic book shark-man.

But even with the focus on older DC characters, current Harley Quinn comic book cast member Sy Borgman makes his animated debut in the series.

“When we found out that we could get Jason Alexander to [voice] an elderly Jewish cyborg … you have to take that,” Halpern said. 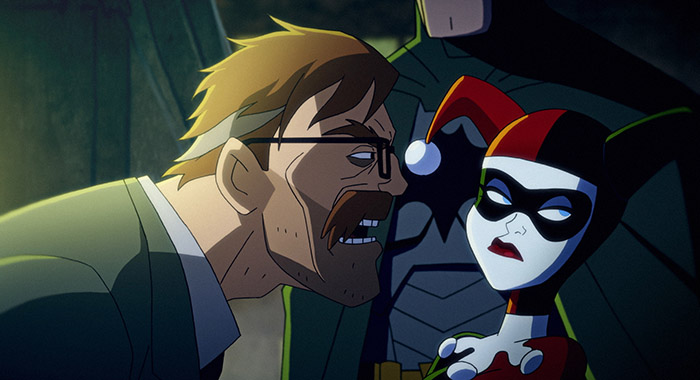 The series also features a number of surprise cameo voices that will leave you searching the end credits to see if a guest character actually voiced themselves. Halpern credited Cuoco (who also serves as an executive producer) with helping to bring both the guest and regular voice cast together.

“Once we had Kaley on board – and Lake and Alan who we had worked with before as well as Ron, actually – it kind of snowballed from there,” he explained. “I think people were like, ‘Oh, OK, this is like legit. There’s clearly these highly respected colleagues that are interested in doing the show.’”

The availability of talent also meant they could go further with reinventions of like King Shark and a broken Jim Gordon voiced by Christopher Meloni.

“Our basic thought was what would Gordon actually be like if he had to be the commissioner of Gotham City for every day of his life and live the movie Seven every day,” Halpern said. “He’d have trauma and probably some sort of substance abuse problem.”

Meloni, who seems to enjoy demolishing cop archetypes in series like Happy! was game for the wildly different take on Gordon.

“If you tell Chris we need to play it a little bit ‘up,’ he’s going to give you something pretty special,” Schumacker said. 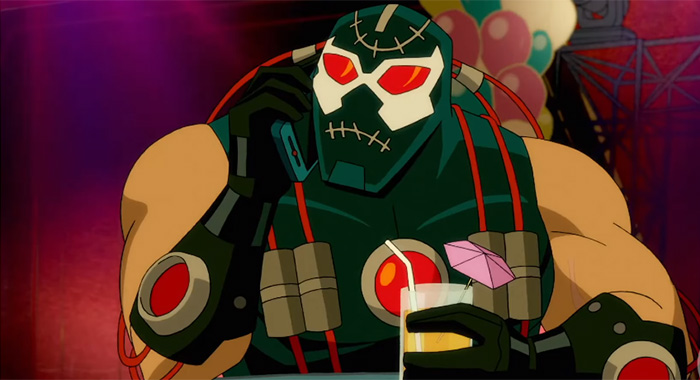 Also special was the showrunners’ take on Bane – that is to say, they decided to play with the comedic potential of the voice Tom Hardy gifted the character in The Dark Knight Rises.

“James Adomian kind of took that and ran with it … that version of the voice just fit our representation of Bane so well,” Halpern explained.

The voice, as it did in The LEGO Batman Movie and with comedians across the country, makes the character something of a joke, which the producer was quick to admit is a very different interpretation from the comics.

“He’s one of the smartest criminal geniuses in the whole entire DC Universe and in our show he’s — not that,” Halpern explained. “For the longest time we were just like, ‘OK, he’s like a punching bag for the rest of the criminal underbelly. It shouldn’t just be just like an elaborate ruse, because he’s all about those long cons, and then we were just kind of like, ‘Nah, this is too funny.’”

The producers’ sense of humor led them to directly adapt one idea from a 2001 JLA story by introducing a villain called the Queen of Fables (voiced by Wanda Sykes in the series) in the exact state the Justice League left her at the end of the issue – stuck inside a paper copy of the United States tax code.

“We just thought that was so funny and absurd,” Schumacker said. “And then we were like, ‘What’s the next evolution of that?’ What can she do inside of that tax code? Well, she can become a CPA.”

But beyond her humorous appearance, the Queen of Fables also serves a role in Harley’s ongoing story.

“We wanted a very powerful, female supervillain to act as sort of the cautionary tale for Harley if she were to break [the Legion of Doom’s] glass ceiling, and the Queen of Fables felt like a perfect fit,” Halpern explained, noting that her relative obscurity meant the character could serve this role in an accessible way to viewers who may not have read the original JLA story. “Even if you don’t know who she is, [you realize], ‘OK, she’s an evil sorceress who has Gumby-like power. Got it.’

“Also [the League’s] punishment for her was so much worse than their punishment for literally every other supervillain,” he added. “That’s what I think jumped out to us. I think that that was our jumping off point.”

Nonetheless, viewers will see a major difference between Harley and the Queen of Fables. One which Halpern called their “North Star” while developing the series.

“Harley has her own moral code,” he said. “It definitely does not align with the moral code of most people on Earth. But in her mind, she’s doing what she thinks is right.” 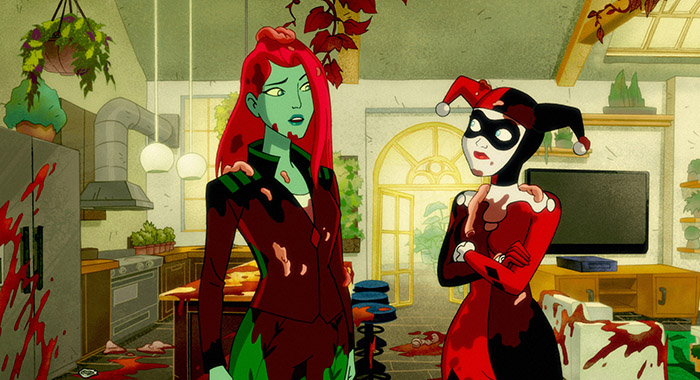 Viewers will also see that moral flexibility with Poison Ivy, who insists she’s not part of Harley’s crew and just doing her thing to protect the environment. Her unique worldview also makes Harley the one human being she considers a friend.

Historically, the two have had a rapport since the 1993 Batman: TAS episode “Harley and Ivy.” In the comics, it eventually evolved into a romantic dynamic. But for the purposes of Harley Quinn’s first season, that element is being downplayed for an important reason.

“If we’re breaking her away from the Joker and we’re telling a story of self-discovery, we didn’t want that self-discovery to get wrapped up in yet another relationship,” Halpern explained. “We didn’t want Harley to be defined by the person she was dating. We wanted her to be able to explore [the question] ‘What does my life look like and what do I actually want when I’m not tethered to someone else?’”

Nonetheless, their relationship may be teased here and there, and Halpern suggested it may come into play in a potential second season.

In the meantime, their friendship is one of the show’s highlights. Ivy’s deadpan delivery and Daria-like outlook bounces off the energetic Harley, who Halpern described as a “consummate optimist.” Well, an optimist freed from “societal pressures and norms” anyway.

When not cracking jokes, the series will explore a little bit of the divide between Harley and her life as Dr. Harleen Quinzel. Although, both Halpern and Schumacker agreed “the core [of her] was still the same,” with Halpern adding there was “probably a lot of work to keep Harleen ‘Harleen.’”

It is the sort of thing adult animated shows explore alongside the freedom to curse.