New York Comic Con kicked off on Saturday with what one audience member quipped was the most intimidating panel he’s ever seen — which is to say that the caliber of talent that came out for the Good Omens panel was off the charts. Neil Gaiman, who co-wrote the 1990 novel with the late Terry Pratchett, is creator and showrunner of the forthcoming Amazon series, which is set to drop in 2019 and whose first trailer premiered at NYCC. Just like the novel on which it’s based, the series follows an Earth-bound angel and demon named Aziraphale and Crowley, respectively, as they join forces to track down the antichrist and stop the coming of the Apocalypse.

Joining Gaiman on panel, which was moderated by  Whoopi Goldberg, were Good Omens director Douglas Mackinnon (Sherlock) and stars Michael Sheen (who plays the stoic and sensible Aziraphale), David Tennant (who plays the suave Crowley), Jon Hamm (who plays Archangel Gabriel) and Miranda Richardson (who plays Madame Tracy — in addition to several split personalities). Together, they revealed little tidbits about the long-in-the-making screen adaptation.

Some quick takeaways: Hamm, for one, is a Gaiman fan — he recalled responding, “Yes, I don’t care what the part is [because] I know it will be awesome,” when the author emailed him about the project; Frances McDormand as the voice of God ultimately became “the voice of the book,” per Gaiman, in that she was able to articulate aspects like the footnotes for the screen; there were a total 240 speaking roles attached to the massive production; they decided to expand upon the novel’s famous ending in giving it the “six-hour-movie” treatment; and the list goes on.

In all, Gaiman and company seemed just as excited to present what they’ve been working on as the fans were to see it. Rotten Tomatoes was on-hand at the Hulu Theater in Madison Square Garden to catch five major highlights from the hour-long event:

1. It was a dying wish of Pratchett for Gaiman to adapt Good Omens for the screen. 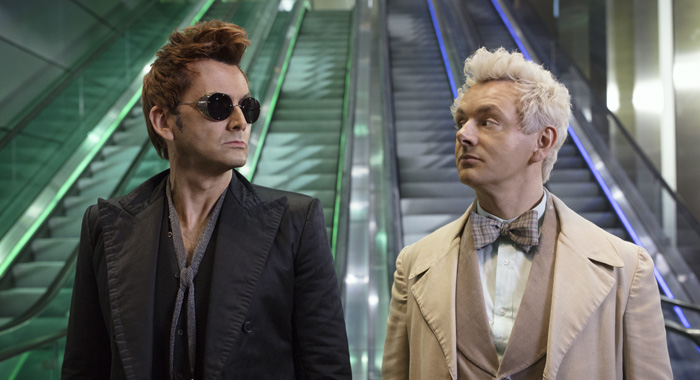 To hear Gaiman talk about this latest project for Amazon, it’s clear he has put his heart and soul into the miniseries, and that’s in part, he revealed, because making it was quite literally one of Pratchett’s final requests before his death in 2015.

“Terry Pratchett and I wrote the novel almost 30 years ago,” Gaiman explained. “We failed to get a movie made almost immediately. We kept failing to get movies made. Eventually, we just handed it over to [screenwriter] Terry Gilliam, who failed to get movies made for years. And then a few years ago, Terry [Pratchett] and I thought it might be a really good idea to try it as television, and we went looking for writers, and they all said, ‘No, it’s too big and too weird.’ And then Terry asked me if I would write it. And he never asked me for anything — we’d been friends for 35 years, and he said, ‘You have to do this because I don’t have very long to live, and I want to see it before the lights go out.’ And then he died much, much faster than any of us expected, which meant I sat down to write the script for episode 1 shortly after he died. It was a last request, so I’ve seen it through.”

2. While they’ve never worked together before, there was immediate chemistry between Sheen and Tennant. 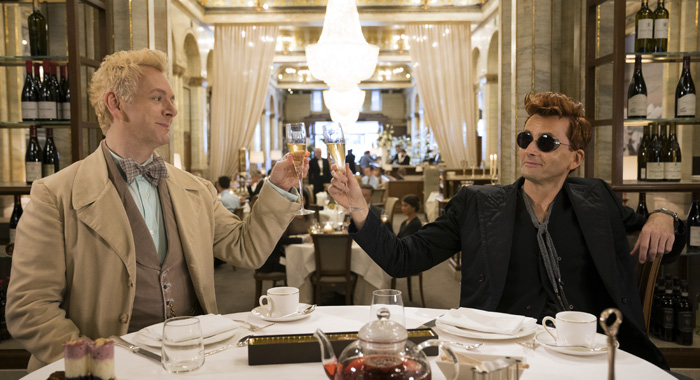 The cast and creatives also detailed the immediate spark of chemistry between the series’ two leading men, Tennant and Sheen, with Mackinnon saying the energy between them is nearly a third character onscreen.

“When you see David and Michael together, it’s almost like they create a third person that’s somewhere in the middle. They’re such a great pair,” he said. “The performances sort of merge.” Sheen, who became attached to the project as a longtime fan of the novel, also spoke his costar’s praises, saying that from the start, they had a “sexy” dance happening between the two of them.

“When we did the first table read, [it was] the first time we’d ever said the lines out loud next to each other,” Sheen explained. “We’d known each other for quite awhile, but we’d never worked with each other. We’ve been in one film together, but we didn’t have scenes together. So we’d known each other, and I’d been a huge fan of David’s work. So this was the first time we actually got to sit down and say the words, and I remember feeling like, ‘All right, well in you’re in that area, that’s your dance space, and this will be my dance space,’ and we were sort of, like, bumping up against each other a little bit. And then eventually, it just kind of clicked into a rhythm. You go, ‘Oh, we’re really moving. This is kinda sexy!’ ” (Tennant chimed in: “It was very sexy.”) “We just seemed to fit,” Sheen concluded.

3. Just like the novel, Good Omens has an indelible tone. 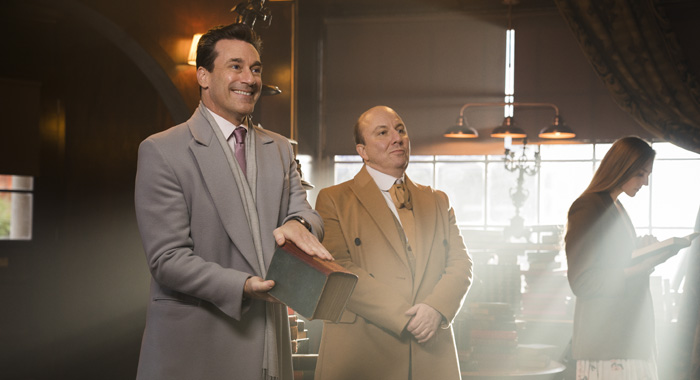 Seeing as the story is so heavily steeped in fantastical and theological dramas — it’s the end of the world, after all! — Tennant admitted that he was a bit nervous to see how the whole thing would turn out because the script’s moroseness was balanced by various characters’ humor, including his own.

“I think the thing is that Neil and Terry created this world that is completely unique and of their twisted, brilliant minds,” Tennant said. “And actually, in the run-up to it, I was worried. What is the tone of this? Because it’s nothing like anything else I’ve done. Is it a comedy? Is it a drama? It’s somewhere in between the two. It’s in a slightly heightened world, and yet it’s a very real world. It’s the bizarre and extraordinary crashing into the mundane — it’s all those things at once. And it felt like that was going to be quite a hard transition to make. What happened, I think, [is] on the first day, we just trusted this script. You just give into it, then this extraordinary, completely unique, idiosyncratic world just kind of emerges.”

Sheen added that it wasn’t just a matter of trusting the script to make the series work; they also had to trust each other.

“We just kind of clung to each other like survivors in the sea clinging to a bit of driftwood,” he said. “I think that was the thing—in a universe that has so much crazy stuff going on and huge, epic things, in the middle of it all is just these two beings who are very, very human (when they’re not human).”

“Which is kind of the story,” Tennant added. “It’s about these two in the middle of madness going, ‘We’ve got each other—hang on!’ And that’s what we ended up doing as actors.”

4. Expect Good Omens to play with time in unexpected ways. 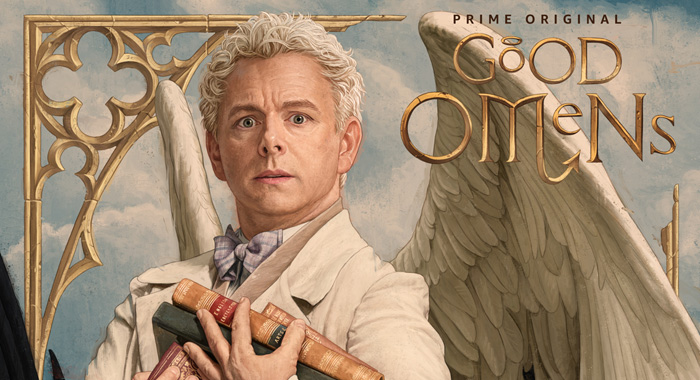 Reflecting on their favorite, (mostly) spoiler-free moment in the series, Tennant and Sheen agreed that the first half of episode 3 is a standout. It’s there that audiences learn how Crowley and Aziraphale’s relationship has developed since the Garden of Eden. (We get a taste of this time-jumping in the teaser trailer, too.)

“A large chunk of the episode is seeing how the relationship between Aziraphale and Crowley is developed throughout the whole of time, and we go through the history of the world,” Sheen revealed. “That was really fun to do. I hope that it will be incredibly satisfying for an audience to watch that happening.”

Gaiman added that the series will likely tap into audience’s sense of nostalgia. “The story gets to begin 6,000 years ago, but then it rapidly moves to 11 years ago,” he said. (Eleven years ago being when the series’ antichrist was born.) “I like 11 years ago because past-y things can happen there. There are still old-fashioned mobile phones and people are still using phone boxes and stuff like that. As we move into the present, we’re in a kind of slightly nostalgic present. Just as in the world today, you will find bits of old technology just scattered around and things. You know, Crowley has an iPhone, but he also has a phone attached to an ancient answering machine on his desk because he’s never bothered to change it. Aziraphale, on the other hand, has a phone that he installed very proudly as the latest most modern thing possible in about 1934, and has not changed that either.”

5. Like Gaiman’s best work, with Good Omens, he wants to explore the good and evil within all of us. 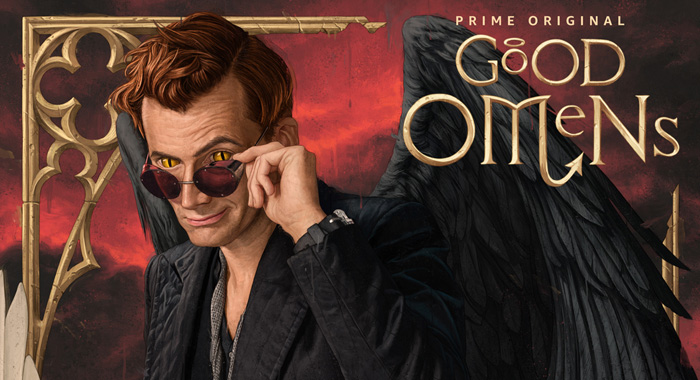 “We are capable of amazing feats of goodness and virtue and magnificence and self-sacrifice, and we can be evil, appalling, selfish — and that can be wrapped up in the same person. So the joy of that for me was that we had a demon who really likes being here and likes people a lot more than he would ever admit. And we have an angel who Crowley describes as ‘just enough of a bastard to be worth knowing.’ And the two of them, you know, you get the feeling that Aziraphale thinks that he’s a slightly better person than he is, whereas Crowley is absolutely under no illusions about either of them, and he’s perfectly content to be not quite as bad as he ought to be.”