ABC, CBS, NBC, Fox, and The CW reveal their fall schedules, Plus, a new trailer for HBO's His Dark Materials and the week's biggest casting news. 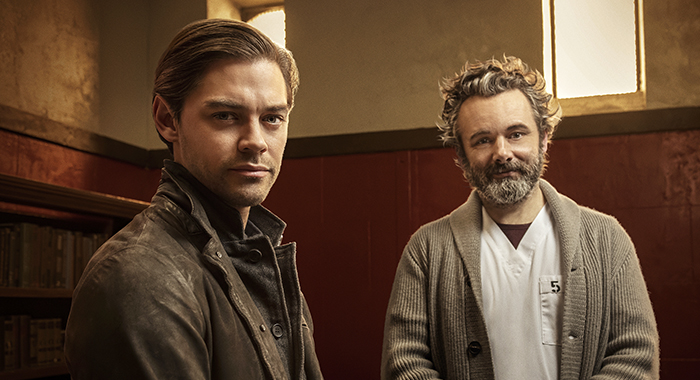 This week’s biggest TV news comes from the five main broadcast networks — ABC, CBS, NBC, Fox, and The CW — which debuted their fall TV schedules for advertisers in New York City all week long. We rounded up the news from each network in the order of this week’s presentation, along with when you’ll be able to watch each of them. Find out what nights your DVR will be getting the biggest workout in our roundup below, watch some of the trailers for the new series, and stick around for a new trailer for His Dark Materials from HBO and some major casting news at the end.

News from the New York Upfronts

Following Disney’s acquisition of Fox and many of the company’s assets — but not the Fox network — the broadcast network is having a rebuilding year. The fall will see the debut of football and wrestling, along with the premieres of existing hits including 9-1-1, the final season of Empire, The Resident, the second season of reality hit The Masked Singer, and, of course, The Simpsons.

The network’s three new shows for the fall include Prodigal Son, about the son of a notorious convicted serial killer who has made hunting murderers his life’s work (and starring The Walking Dead’s Tom Payne and Masters of Sex’s Michael Sheen); Not Just Me, about a woman who discovers that her fertility doctor father used his own sperm to conceive more than a hundred children, including two new sisters (starring Brittany Snow and Timothy Hutton); and Bless the Harts, an animated series about a hard-working Southern family and featuring voices from Maya Rudolph, Kristen Wiig, Ike Barinholtz, and Jillian Bell, among others.

Fox is holding several of its hit series for midseason (when football and baseball will be finished), including The Orville and Last Man Standing. It will also debut a 9-1-1 spin-off set in Texas and starring Rob Lowe, the cop drama Deputy starring Stephen Dorff, the soapy drama Filthy Rich starring Kim Catrall, and the artificial intelligence–themed drama NeXt starring John Slattery. New comedies include sitcom Outmatched, about average parents raising genius children, and two animated series: Duncanville and The Great North.

NBC is bringing back many of its biggest series too, including The Voice, This Is Us, and all of the Chicago procedurals. There are also new seasons of New Amsterdam, The Blacklist, and the record-breaking 21st season of Law & Order: Special Victims Unit. (It’s now the longest-running live-action prime time series in history.) The fall’s new drama is Bluff City Law, about a father-daughter lawyer duo in Memphis.

On the comedy side, Perfect Harmony, which stars Bradley Whitford as a former Princeton music professor who becomes the director of a small-town church choir, and Sunnyside, starring Kal Penn as a disgraced New York City councilman who becomes a champion for a group of people attempting to become American citizens, join Superstore and The Good Place on the network’s Thursday night lineup.

Another network that’s sticking with its existing properties is ABC, which will premiere new seasons of Dancing With the Stars, The Good Doctor, The Conners, Bless This Mess, Black-ish, The Goldbergs, Schooled, Modern Family, Single Parents, Grey’s Anatomy, A Million Little Things, How to Get Away With Murder, American Housewife, Fresh Off the Boat, and America’s Funniest Home Videos in the fall.

New scripted series debuting in the fall include the drama Emergence, about a cop who takes in a mysterious little girl she finds at a crime scene only to become embroiled in a conspiracy that leads back to the girl’s unknown identity; Stumptown, about a military-veteran private investigator who clashes with criminals and cops, based on the graphic novel of the same name and starring the MCU’s Agent Maria Hill Cobie Smulders; and Mixed-ish, a Black-ish spin-off about the childhood of Tracee Ellis Ross’ Bow. Tiffany Haddish will also head up a rebooted version of the classic variety show Kids Say the Darndest Things.

At midseason, ABC will bring back American Idol, The Bachelor, Shark Tank, The Rookie, Station 19, and Marvel’s Agents of S.H.I.E.L.D., and debut the dramas The Baker and the Beauty, about a Cuban baker in Miami who is thrust into the spotlight when he falls in love with an international superstar fashion mogul, and For Life, about a prisoner who becomes a lawyer and litigates cases for other inmates while fighting his own wrongful conviction and life sentence for a crime he didn’t commit (inspired by the real life of Isaac Wright Jr.). The only 2020 new comedy debut for the network is United We Fall, about two parents who stick together while juggling their kids and their overly involved extended family.

CBS is bringing back a whopping 24 new shows in the 2019-2020 season, including 14 in the fall. The 2019 returnees are standby procedurals, including NCIS, NCIS: New Orleans, NCIS: Los Angeles, Blue Bloods, Hawaii Five-0, FBI, SEAL Team, SWAT, Magnum P.I., God Friended Me, and the final season of Madam Secretary. The loss of The Big Bang Theory will be big for the network, which is bringing back comedies The Neighborhood, Young Sheldon, and Mom.

The new series debuting this fall on CBS include the Chuck Lorre–created comedy Bob Hearts Abishola, about a man who falls in love with his Nigerian nurse; courthouse drama All Rise, a courthouse drama focusing on a black female district attorney as she begins her new career as a judge; The Good Wife creators Michelle and Robert King’s psychological mystery Evil, starring Katja Herbers and Mike Colter, about a psychologist, a priest in training, and a carpenter who join forces to investigate unexplained mysteries, supposed miracles, demonic possessions, and hauntings and ultimately discover whether there is a logical explanation or something truly supernatural is at work; comedy The Unicorn, about widower Wade (Walton Goggins) who’s finally ready to begin dating again but doesn’t realize what a catch he is; and sitcom Carol’s Second Act, starring Patricia Heaton as a divorcee who follows her dreams and goes to med school, becoming her hospital’s oldest intern in the process.

The network’s midseason schedule will include returning series Criminal Minds, MacGyver, Man With a Plan, The Amazing Race, Undercover Boss, and Big Brother, along with newcomers FBI: Most Wanted, a spin-off of Law & Order creator Dick Wolf’s FBI that focuses on the Fugitive Task Force that pursues the criminals on the Bureau’s Most Wanted List; Tommy, starring Edie Falco as a former NYPD officer who becomes Los Angeles’ first female chief of police; and Broke, about a single suburban mother whose estranged sister and wealthy brother-in-law move in when their fortune disappears.

The CW renewed every single one of its series that wasn’t already announced as ending this season, 11 in all. Superheroes Supergirl, Arrow, The Flash, and Black Lightning will premiere as usual in the fall, and will be joined by their new colleague Kate Kane (Ruby Rose), a.k.a. Batwoman. Also returning are Legacies, Charmed, All American, Dynasty, and, of course, Riverdale, with DC’s Legends of Tomorrow, Roswell, New Mexico, The 100, and In the Dark held for midseason.

In addition to Batwoman, which you can read more about here, the fall will bring the network’s newest mystery series, Nancy Drew, which has a supernatural bent. Riverdale spin-off Katy Keene, starring Lucy Hale as the titular fashion designer and Ashleigh Murray reprising her role as pussycat Josie McCoy, will debut in the spring.

Not to be outdone by the tsunami of broadcast news, HBO released its trailer for His Dark Materials. The series adapts Philip Pullman’s book trilogy of the same name. The first season follows brave young Lyra (Dafne Keen) as she journeys through various worlds searching for a kidnapped friend and uncovers a conspiracy in which children are being stolen. The series also stars Ruth Wilson, James McAvoy, Clarke Peters, and Lin-Manuel Miranda. The series does not yet have a release date. 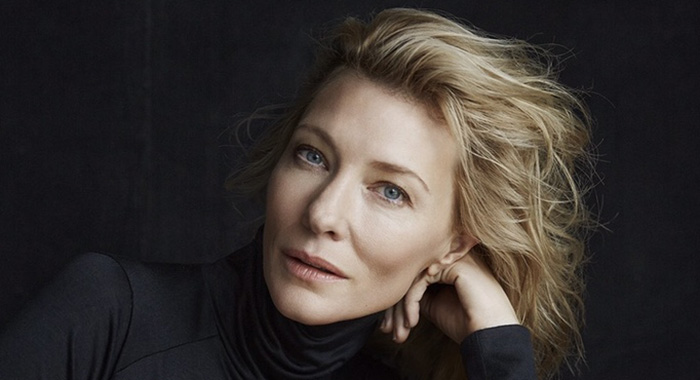 (Photo by Steven Chee/courtesy of FX)

FX has hired an all-star team to join Cate Blanchett in its upcoming miniseries Mrs. America, which follows the movement to ratify the Equal Rights Amendment and the backlash led by a conservative woman named Phyllis Schlafly (Blanchett). The story will be told through the eyes of the women of that era — including Gloria Steinem, Betty Friedan, Shirley Chisholm, Bella Abzug, and Jill Ruckelshaus — and explore how the American political landscape was forever shifted. It will debut on the network in 2020. 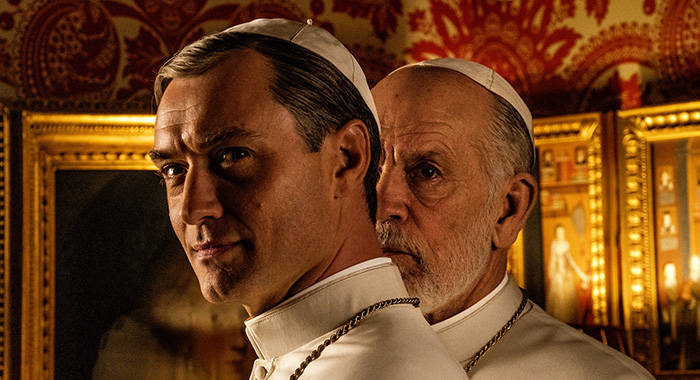 The upcoming second season of David Letterman’s Netflix talk show My Next Guest Needs No Introduction will feature a star-studded lineup of talent including Kanye West, Ellen DeGeneres, Tiffany Haddish, Lewis Hamilton, and Melinda Gates. All episodes of season 2 debut May 31.

The new season of Running Wild With Bear Grylls, which moves from NBC to National Geographic this fall, will feature the host braving the elements with Captain Marvel herself, Brie Larson, and somehow-never-a-superhero Armie Hammer.

Queer Eye’s Tan France will host a fashion competition series Next in Fashion with designer and model Alexa Chung. Eighteen designers will face off in challenges for a chance to win a $250,000 grand prize in the 10-episode series. Elizabeth Stewart and Eva Chen will be recurring guest judges with additional guest judges to be announced later. No date has been announced for the series.

Finally, HBO announced that Sharon Stone and Marilyn Manson will guest star in The New Pope, the eight-episode follow-up series to The Young Pope, that will star John Malkovich and Jude Law — both as popes.