Everything to Know About Apple TV+

Find out how, where, and when you can watch Apple's new TV offerings, including Jason Momoa's See, Reese Witherspoon and Jennifer Aniston's morning show drama, and Ron Moore's post-Battlestar Galactica return to outer space.

Apple’s March 2019 launch event for its long-anticipated television service (watch it here) finally revealed the company’s plans for the major slate of television programming it’s been planning for the past couple of years, but it skipped a few key details. Namely: When it would launch, and how much it would cost.

Now, the company has revealed those major points, plus the news that a year’s subscription for the service, which will include content from Chris Evans, Reese Witherspoon, Steven Spielberg, Taika Waititi, M. Night Shyamalan, and more, will come free with the purchase of a major Apple device.

Below, find out everything you need to know about the streaming service, including its name, launch date, cost, programming, and more.

RELATED: A Guide to Apple Original Series in Production or Development

What is the service called? 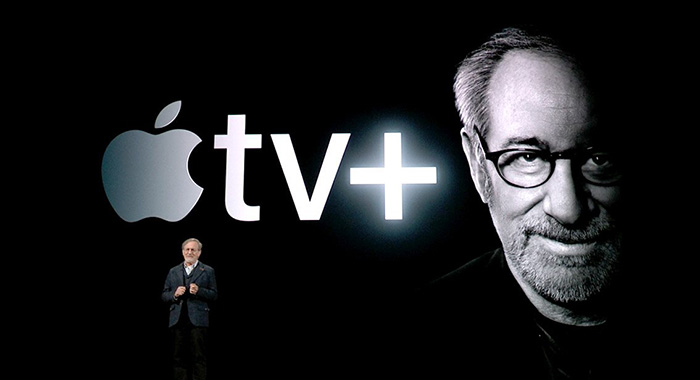 The company’s new, expanded Apple TV app will be home to the new service, which is called Apple TV+.

The new Apple TV app will integrate a la carte streaming services, cable and satellite providers, and Apple TV channels (including include HBO, Starz, Showtime, CBS All Access, and more) all in one place. Users will be able to access their purchased iTunes movies and TV shows (and rentals) as well, and everything will be integrated into the same interface.

When will it launch?

The new Apple TV app launched for iPhone, iPad, and Apple TV in May, and on Mac in the fall. Apple TV+ — and the tech company’s original series — will launch in more than 100 countries on Nov. 1.

How much will it cost?

To start, the service will cost $4.99 a month for a Family Sharing plan that includes up to six uisers, which is low compared to other streaming services. However, those competing services all come with vast libraries of old content, while Apple TV+ will launch with just its first nine original series. Apple TV+ will come with an initial free seven-day trial, and customers who purchase any iPhone, iPad, Apple TV, iPod touch or Mac can enjoy one year of Apple TV+ for free.

What shows will be available?

The series available at launch include dramas The Morning Show, See, and For All Mankind; dark comedy Dickinson; kids’ series Helpsters, Snoopy in Space, and Ghostwriter; and documentary The Elephant Queen.

The Morning Show is produced by Reese Witherspoon and Jennifer Aniston, who star alongside Steve Carell in a series that explores the world of morning news and the ego, ambition and the misguided search for power behind the people who help America wake up in the morning.

See stars Jason Momoa and Alfre Woodard and is set 600 years in the future after a virus has decimated humankind and rendered the remaining population blind. When all humanity has lost the sense of sight, humans must adapt and find new ways to survive.

Dickinson is a darkly comedic coming-of-age story that explores the constraints of society, gender and family through the lens of rebellious young poet Emily Dickinson (Hailee Steinfeld).

For All Mankind, from Battlestar Galactica and Outlander creator Ronald D. Moore, imagines what would have happened if the global space race never ended and the space program remained the cultural centerpiece of America’s hopes and dreams.

Helpsters, a new children’s series from the makers of Sesame Street, stars Cody and a team of vibrant monsters who love to help solve problems. It all starts with a plan. Snoopy in Space, a new original from Peanuts Worldwide and DHX Media, takes viewers on a journey with Snoopy as he follows his dreams to become an astronaut. Together, Snoopy, Charlie Brown and the Peanuts crew take command of the International Space Station and explore the moon and beyond. Ghostwriter, a reinvention of the beloved original series, follows four kids who are brought together by a mysterious ghost in a neighborhood bookstore, and must team up to release fictional characters from works of literature.

The Elephant Queen is an acclaimed documentary film and cinematic love letter to a species on the verge of extinction, follows a majestic matriarch elephant and her herd on an epic journey of life, loss and homecoming. 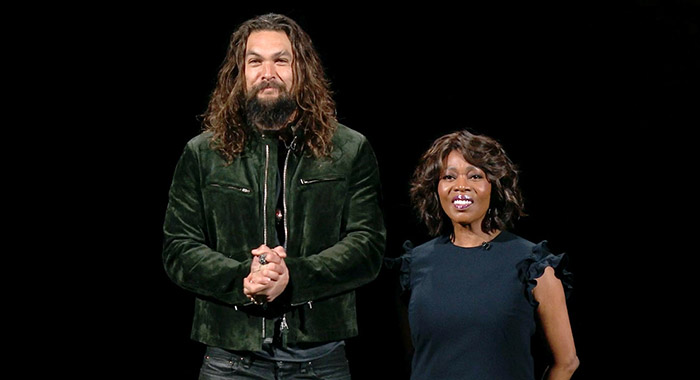 Spielberg was present in March to announce his reboot of Amazing Stories, while Witherspoon and Aniston (and their costar Steve Carell) revealed the title of their long-awaited morning show drama, The Morning Show. Jason Momoa and Alfre Woodard announced their series about the survivors of an apocalypse that left the human race without sight, See. Kumail Nanjiani announced his anthology series about everyday immigrants, Little America. Even Big Bird (yes, that one) announced that Sesame Workshop will debut a new preschool series about coding called Helpsters. Abrams and Sara Bareilles announced their series about an aspiring New York City musician, Little Voice (followed by a short performance from the singer/songwriter and actress).

Introducing Apple TV+.
A new streaming service with original stories from the most creative minds in TV and film. #AppleEvent pic.twitter.com/xLhtdNNaa2

The crowning jewel of the program, however, was when Oprah Winfrey walked on stage to announce her new Apple TV+ venture, which includes two documentaries (one a series about mental health, one about labor abuse) and a brand-new book club partnership with Apple.

Excited to announce my new @apple show at the #appleevent! The Morning Show ☀️ it reveals what happens in the fast-pacedworld of broadcast news. I star alongside Jennifer Aniston, Steve Carell & many other talented cast members. Can’t wait for you all to see it! Coming this Fall! pic.twitter.com/T1ZtpjhnZl

How can I watch it? 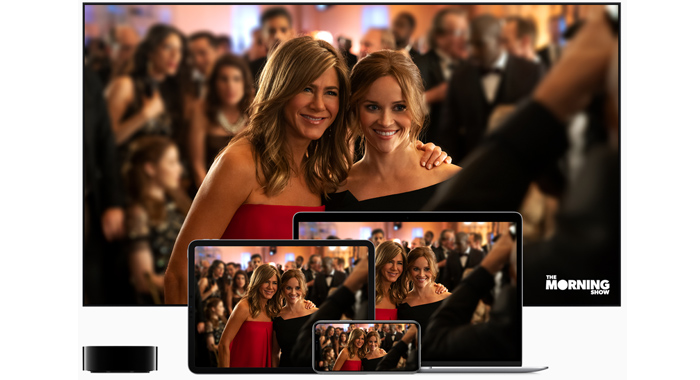 Subscribers can watch Apple TV+ originals both online and offline, ad-free and on demand, on the Apple TV app, which comes pre-installed on iPhone, iPad, Apple TV, and iPod touch and will soon be on Mac with macOS Catalina. The Apple TV app is also available on select Samsung smart TVs, and will come to Amazon Fire TV, LG, Roku, Sony and VIZIO platforms in the future. Web viewers can sign up to watch at tv.apple.com.