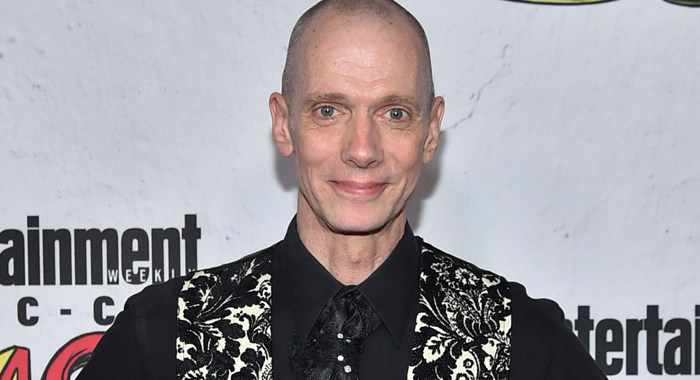 If you’ve seen a sci-fi/fantasy film in the past 30 years, chances are you’ve seen Doug Jones transform himself into some of the most recognizable creatures captured on celluloid — even if you never quite knew it was him.

The actor has played a fish-man mutant in the Hellboy movies, a friendly zombie in Halloween classic Hocus Pocus, the titular superhero in Fantastic Four: Rise of the Silver Surfer, and the nightmare-inducing Pale Man in Pan’s Labyrinth — among many, many others. He’ll soon play a different fish-man in Guillermo Del Toro’s festival favorite The Shape of Water, out Friday, and can be seen as alien Saru on CBS All Access’ Star Trek: Discovery.

Rotten Tomatoes enlisted Jones, movie monster extraordinaire, to pick the Five Favorite Movie Monsters that influenced his career — and to reflect on five of his own favorite characters as well. 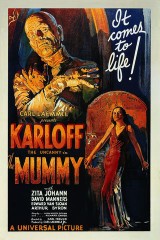 The first horror movie I ever remember even seeing was The Mummy with Boris Karloff, so that would be my first monster that is beloved to me. Boris channeled something so haunting with that role, and close-ups on his eyes were enough to give me the heebie-jeebies for the rest of my life. The way he physically channeled that walk and the creaky movement of someone who’s been dead for that long and decaying for that long in bandages, he really gave it something beyond that era. 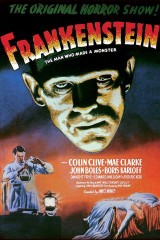 Number two would be also Boris Karloff, as Frankenstein’s monster in Frankenstein. That was another performance that left me just chilled and with such imagery that’s emblazoned in my mind, and he channeled something completely different for that. He was a completely different character. It showed his diversity as an actor, and his subtleties. That was an era of filmmaking where people over-did it a lot, and he found subtleties as Frankenstein’s monster that I just thought were [wonderful]. Less was more, and he knew that. 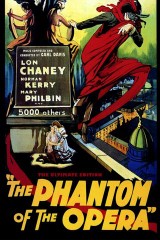 Number three would be Lon Chaney as Phantom of the Opera. I think what struck me was his theatrics. Again, he did go over and big, as that era of acting would dictate, but he did it with such conviction and such truth that I bought every single minute of it. He left me, again, terrified and chilled. 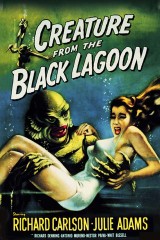 Number four would be the Creature from the Black Lagoon. That one, of course, was split up; two actors played him. Ricou Browning was the Gill-man in the water, and Ben Chapman was the Gill-man out of the water, on the land. The most memorable imagery for me would be Ricou in those underwater sequences, when he’s swimming underneath Julie Adams. She’s innocently having a swim in her little white bathing suit, like “la la la,” having no idea that this thing is lurking underneath her. But that underwater performance of his has channeled its way into my own creatures. I’ve played two fish-men now in my career, so I think that the Creature from the Black Lagoon actually left a huge thumbprint on me from that. 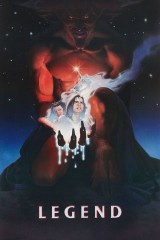 The last one on my list of five would be Tim Curry as Darkness in 1985’s Legend. He was a big, demon, Satan kind of character, which normally is not what I’m drawn to, but he — gosh. He was so present in that role, and gave it a voice and a physicality that no one else would have thought of but Tim Curry. So I just love him as Darkness.

Jean Bentley for Rotten Tomatoes: You mentioned the two fish-men you’ve played. They’re Abe Sapien from Hellboy, and what’s the other one?

RT: The Shape of Water has been getting great reviews. What was your experience like on that film?

Jones: I was tickled pink with the reception it’s gotten just from the festival circuit so far. It was magical. With Guillermo I knew we were making something very special with this movie, the kind of feeling I had when we were making Pan’s Labyrinth together. This is my sixth movie with him, but most of them, the other four, have been big-budget things. We did Hellboy 1 and 2, and Crimson Peak and Mimic. But Pan’s Labyrinth and The Shape of Water are both films that were passion projects for him personally, you know? There was something very much more personal going on in those films for him, so a more artistic thing would come out of those experiences.

The Shape of Water is a love story unlike anything I knew was possible on film. But only Guillermo del Toro could pull off a young lady falling in love with a fish-man from the wild, and make it look sexy and plausible. I’ve played many creatures on film before, but never in that kind of a story, with that kind of emotional attachment to my co-star. 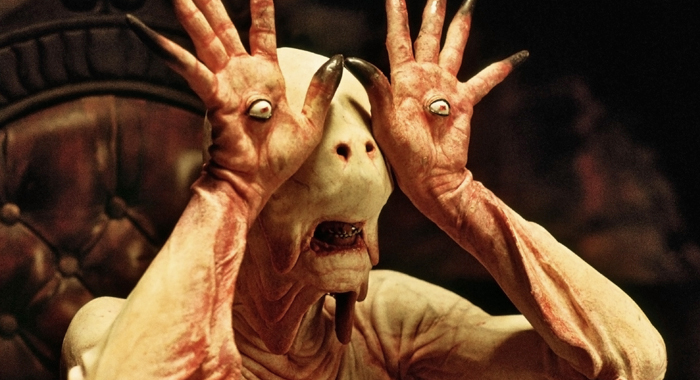 RT: You’ve listed five movie monster performances that made big impressions on you, but what are some of your own roles that stand out to you?

Jones: Over 30 years of acting, all the characters I’ve played have become like children to me. It’s very hard for a parent to pick their favorite child, right? They’re not supposed to have one anyway. I think it was maybe Tom Cruise who said in an interview once, like, “What’s your favorite character you’ve ever played?” and his answer was, “My most recent.”

But truly, honestly, the two characters that I have that are present in the public eye most right now are the amphibian man from The Shape of Water that I just mentioned, because it’s getting so much hype and it’s coming out soon, and Saru from Star Trek: Discovery. Saru as an alien character is different than anything I’ve ever played before. He’s got the most layers, and the most backstory to figure out, and the most wide array of emotion, and the most storyline I think I’ve been given on an ongoing basis. Over the arc of this first season we just finished, I get to go everywhere emotionally and intellectually with this character. So he absolutely has become a favorite, along with the fish-man from The Shape of Water, because of that.

RT: What are some other ones?

Jones: Probably the most scary thing I’ve ever played, and that has a long shelf-life as a scary character, is the Pale Man from Pan’s Labyrinth — the guy with the eyeballs in his hands.

RT: Oh, I’m familiar. He haunted my dreams for a time.

Jones: Yeah, right? He made his way onto many magazine covers the year that movie came out because it was such a striking image and such innovative character design. So channeling him and getting him through my body was an honor; another creation of Guillermo del Toro’s.

Jones: I would say probably the most lovable, charming, of my characters might be Billy Butcherson from Hocus Pocus. I loved him so much. He’s a goofy zombie. I got to play a zombie before zombies were a cool thing. He was goofy and floppy, and could relate to the kids in the movie, and it was in a Disney, family-friendly, fun film that also has had a very long shelf-life. It comes back around this time of year, every year, with high-rotation television play. Even revival theaters are putting it up all the time. It’s playing at the El Capitan Theatre right now in Hollywood. So that movie lives on and on and on. I just adore Billy. 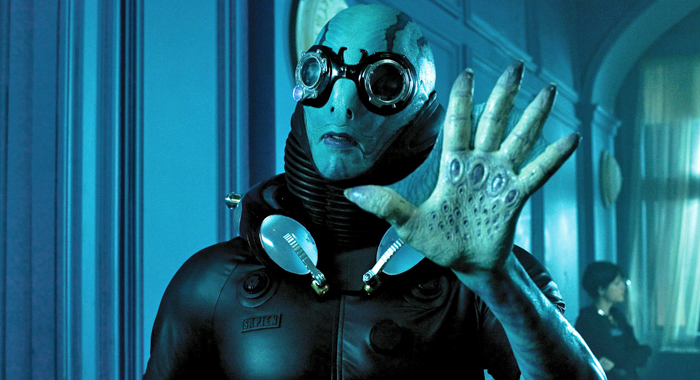 I would say, for overall physicality, and what I had to put into a character, Abe Sapien from the Hellboy movies. In a comic-book movie setting I had to make a fish-man mutant believable, but with a heightened comic-book sensibility, so that was quite a challenge for me. He’s wordy, he’s intelligent, he’s well-read, he’s cultured, he’s a gentleman, so to make all that happen in a fish-man body was — he was one of my biggest challenges, and the way the public has taken to him [is wonderful]. Also, those movies have a long shelf-life. When I’m doing convention appearances, that will be one of the biggest sellers at my tables. People love Abe Sapien. They want to talk about that movie, and a lot of people had their first date watching one of those movies. I hear lots of stories of people’s connection to Abe.

I would say, for sexy heroism, the Silver Surfer. I played him in the Fantastic Four sequel, the Rise of the Silver Surfer. That was probably the best physique I’ve ever been given, and I say “given” because I didn’t earn it. It was sculpted on me with a rubber suit, right? So at the end of the day I had to give that amazing body back to the people that made it. Which is unfortunate.

RT: Even just temporarily, that’s got to feel good.

Jones: Right, right, right. Oh my gosh, yeah. It’s funny because when people know me just as the Silver Surfer, and they haven’t really looked me up to find out anything else I’ve done or what I look like in real life, and they’re meeting me at one of those fan/comic-book conventions, the look on people’s faces. “Oh wait. Did you play the Silver Surfer? Where is he?” I’m sitting at the table, this skinny old man in a tie, in a vest, going, “Hey, it’s me. I’m sorry, that’s all you get today.”

I owe all of the above, by the way, to not only the great directors I’ve worked with, but also the creature effects and makeup people who have [collaborated]. Every one of those characters I mentioned has a completely different team attached to it that were just amazing artists. I’ve had the best makeup artists in the world put their hands on my face, so really, I owe a lot to them. 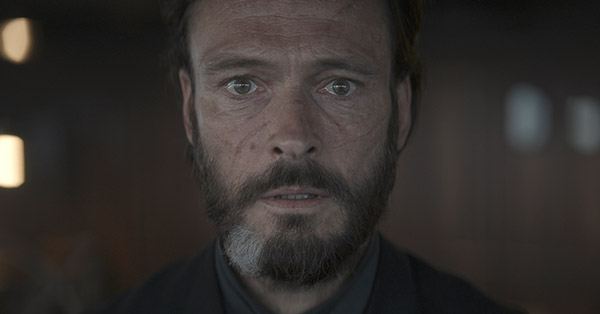