Clown Choreography and A Terrifying Gerber Baby: Visiting the Set of Stephen King's IT

RT traveled to Toronto to visit the film's director, producer, and members of its young cast in the middle of filming.

“What size galoshes are you?” is simultaneously the question I do and do not want to be asked as a horror movie fan visiting the set of a film I’ve been anticipating since its announcement. Like it or not, that was the final transmission I received before leaving for Toronto to step onto the set of IT, which opens in theaters on September 8, 2017. I met with director Andy Muschietti, his sister and producer Barbara Muschietti, and some of the film’s young cast to talk about the new adaptation of Stephen King’s bone-chilling novel, which appears both reverent of the source material and still innovative enough to make me forget it’s ever happened before. Here are five things I managed to grasp from the set when I wasn’t hyperventilating from fear and excitement. 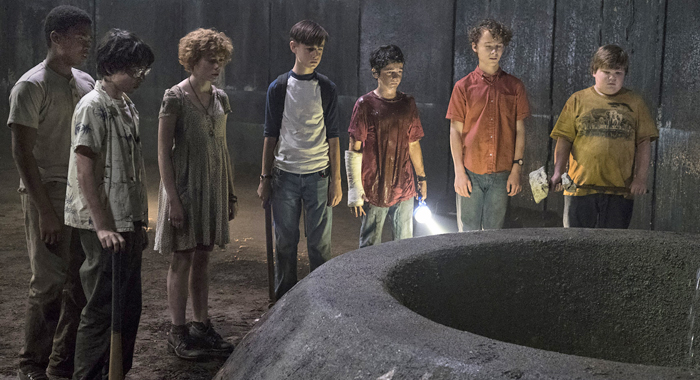 After the release of 2013’s Mama, Andy and Barbara found themselves on an unintended three-year hiatus because they hadn’t found the right project, Barbara said. When this opportunity arose, they wanted to do justice to source material they knew very well. Barbara said, “You die while you’re shooting. It’s a war. You have to do it for something you love.”

Andy insisted that he loved making an adaptation, and “there comes a time in the process where you start feeling good with your interpretation of it, and your contribution to the story.” In the months following this interview, King sent videos to fan events saying how happy he was for them to see the project, and Andy was obviously thrilled. The two didn’t collaborate together in the writing process — something Andy expressed a certain amount of relief about, since at some point it was likely he would have had to say, “Your words and moments don’t work” for this version of the story. The key elements from the source material, Andy said, are in full effect, and overall it’s a very faithful adaptation. There’s a certain lightness to it, and deep emotion, but it’s gruesome and doesn’t pull any punches with some of the gorier deaths (hence the eagerly-anticipated R rating). Andy insisted that “it IS fun.” 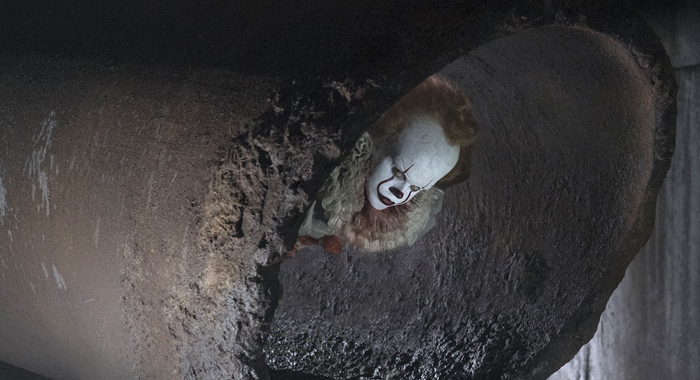 Producer Barbara Muschietti explained that since the film is set in more of a grounded 1980s, with a subtle, non-hit-laden soundtrack and toned-down period costumes, they put special efforts into minimizing CG so as to not yank audiences out of the film (they don’t prefer it as filmmakers, and New Line Cinema doesn’t either, Barbara said). For similar reasons, 2013’s Mama employed some puppetry to impressive results. Therefore, when building this vision, the Muschiettis realized that a more physically active Pennywise would require not a puppeteer, but a choreographer. Barbara said that CG will be mostly used as a transition when something the audience sees is “impossible.”

3. PENNYWISE IS A TIMELESS EVIL 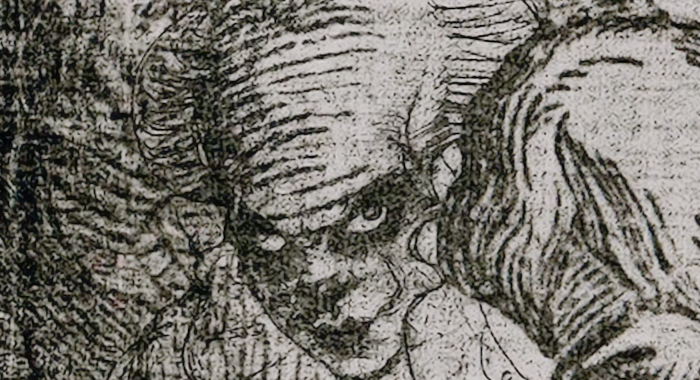 Barbara referred to Bill Skarsgård’s Pennywise as “the ancestral clown,” shunning 21st century modern clown characteristics and instead harkening back to 18th century aesthetics with “upgrades.” King has gone on record saying that, in his novel, Pennywise was influenced by Bozo, Clarabell, and Ronald McDonald. Since those images don’t hold the same cachet with modern audiences as they once did, the producers focused more on only one sketch Andy had done of something akin to a Gerber baby “with something very off.” Andy said nothing much changed after that initial drawing because the baby had a sense of childlike wonder that he felt was an absolute necessity in this interpretation of the character, which he eventually found in Skarsgård’s performance.

Don’t expect just one shade of Pennywise, though. His hair sometimes reflects his mood, which varies wildly, along with his persona and voice (which, at the time of this interview, was not altered in post). Pennywise is hard to pin down, but rest assured, he was terrifying and scaring everyone on set (although Skarsgård is not a method actor, Barbara notes, and is kept separate from the children on the set while shooting).

4. THE KIDS ARE BFFS 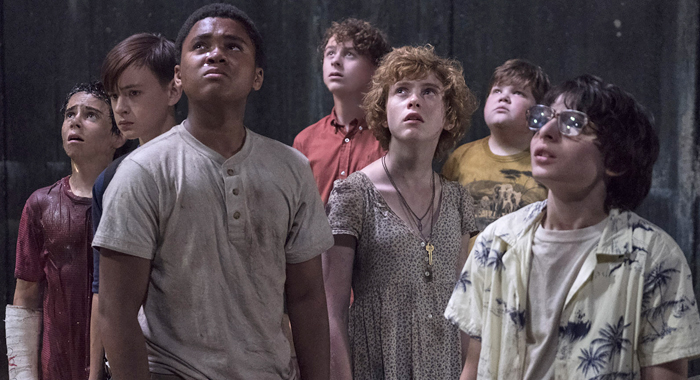 The minute these actors arrived in Toronto for shooting, they started building the kinds of bonds that only clown-fear (and team building exercises and sleepovers) can encourage — and it worked. No one saw Skarsgård in Pennywise gear until they were shooting a scene in which Jeremy Ray Taylor (Ben) is injured, and Taylor said he’d been trying to put it out of his mind ever since. But once the cameras stopped rolling, even after an intense take, the kids were laughing about what life was like in the 1980s (sending something in the mail!), or about the fact that they were covered in slime and hugging. More than one of the kids referred to it as the best summer of their life, especially during days on set where, as Finn Wolfhard said,  there are “four dead bodies in the water and it’s like, ‘Oh cool, this is my job, and this is my life.’”

5. THE DEVIL IS IN THE DETAILS 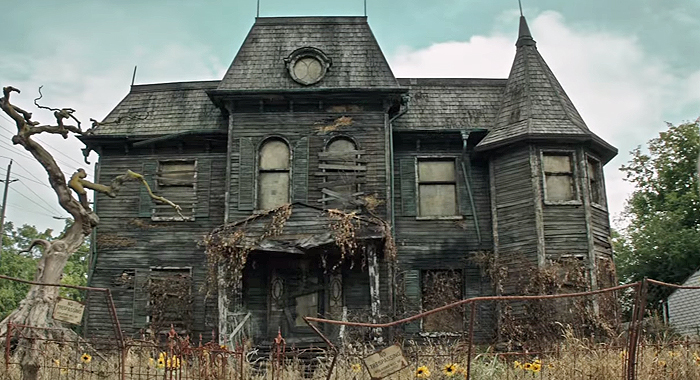 Claude Pare, the Production Designer, took us through the creation of the film’s practical sets, such as an entire house restoration in Oshawa (look for another round window with a pattern in it, similar to Pare’s work in Rise of the Planet of the Apes), along with a wine cellar that turned into the Oshawa set’s basement well. They purchased an ominous-looking tree from a neighbor, screwed it into a larger base, and sat it next to the house to the delight of onlookers who turned it into the subject of several YouTube videos.

Pare’s crowning achievement was the water-filled sewer that we wandered through, which is where the aforementioned galoshes came into play. In a feat of both engineering and artistry, towering 30 feet over the ground, lay the toys of Pennywise’s victims (in the film, it’s even taller due to a bit of CG and an entirely separate tower of toys that sat nearby for specific shots). Pare said special attention was paid to water drainage for the sewer, as well as the water marks that he said echoed those of New Orleans after Hurricane Katrina. The structure itself was imposing enough, but when you began to focus in on the details, it was unsettling to see the antique baby buggies nearly crushed underneath the weight of more modern rollerblades and See ‘N’ Says up above, indicating a gruesome chronology of death.

BY THE WAY: YES, THE TURTLE IS IN IT… 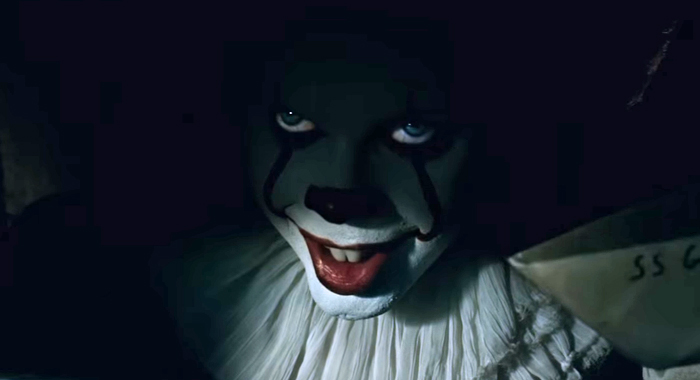 But you’ll have to pay attention.

IT opens everywhere on Friday, September 8.