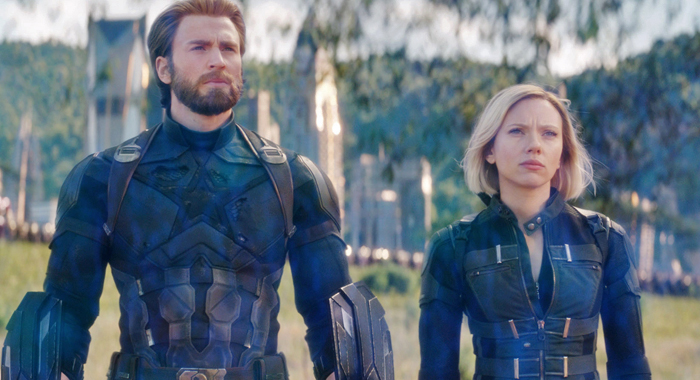 With dozens of movies in the Marvel Cinematic Universe (Doctor Strange in the Multiverse of Madness will be #28) and a combined cast in the hundreds, we’re now at a point when movies regularly star two or more actors who have been in some Marvel movie. A less common situation is when two of the original members of The Avengers (Certified Fresh at 91%) make a film together. Put another way, one third of the original Avengers, Chris Evans and Scarlett Johansson, are reuniting for a $100+ million film called Project Artemis, which Apple has picked up hot off the streamer’s Best Picture Oscar win for CODA (Certified Fresh at 94%). Project Artemis will be the third feature film directed by actor-turned-director Jason Bateman, after Bad Words (Fresh at 65%) and The Family Fang (Certified Fresh at 83%); Bateman has also directed several shows, including 11 episodes of Ozark for Netflix. Although much of Bateman’s work as director (aside from Ozark) has been comedic, it’s not yet known if Project Artemis will be a comedy, as the only thing that is known about the film is that it is set “against the space race” (whether that’s past, present, or future is also unclear). Project Artemis was written by debut screenwriter Rose Gilroy, the daughter of actress Rene Russo and writer/director Dan Gilroy (Nightcrawler).

1. MICHAEL FASSBENDER IS DAVID FINCHER’S THE KILLER FOR NETFLIX

Netflix continues to recruit top directors like Martin Scorsese, Wes Anderson, and Guillermo del Toro to make films for them, and one of the most impressive names on their current roster is David Fincher (Fight Club, The Social Network), whose most recent film, the screenwriter biopic Mank (Certified Fresh at 83%), was made for Netflix in 2020. Fincher recently wrapped production on the quietly made thriller The Killer, adapted from a French graphic novel by Alexis Nolent by screenwriter Andrew Kevin Walker (who wrote Fincher’s Seven). Michael Fassbender will star as the title character, whose description reads: “A man, solitary and cold, methodical and unencumbered by scruples or regrets, The Killer waits in the shadows, watching for his next target.” Tilda Swinton also co-stars in an unknown role. The actual filming of The Killer is something of a resolution of a dream project for David Fincher, who’s been trying to get the film made for almost 14 years.

Speaking of Netflix and famous directors, the streamer’s “big get” this week was Best Director Oscar- winner (for The Hurt Locker) Kathryn Bigelow. Bigelow hasn’t directed a feature film since 2017’s Detroit (Certified Fresh at 82%), but her new Netflix project is being described as her next film, suggesting it will start production soon. That film will be an adaptation of an upcoming novel called Aurora by prolific screenwriter David Koepp, whose filmography includes Jurassic Park, Spider-Man, and the recent HBO Max film Kimi. Aurora is described as a story in which characters “are coping with the collapse of the social order, set against a catastrophic worldwide power crisis,” that crisis being a solar storm that knocks out most of Earth’s power grids. Despite some thematic similarities (Earth facing a catastrophe from outer space), we can expect that Aurora will probably not be a satire like Netflix’s recent Best Picture nominee Don’t Look Up (Rotten at 55%).

Joel and Ethan Coen work together so frequently that they’re often credited as just “The Coen Brothers,” but they do indeed go solo sometimes. Joel Coen did that recently with The Tragedy of Macbeth (Certified Fresh at 92%), which earned Denzel Washington an Academy Award nomination for Best Actor. Now, it’s Ethan Coen’s turn, as he will direct a “lesbian road trip” project he co-wrote with his wife Tricia Cooke in the mid-2000s without the involvement of his brother Joel. The untitled project will be produced by Working Title Films and Focus Features. The Hollywood Reporter describes the project as a “Russ Meyer-inspired romp” (referencing the director of Faster, Pussycat! Kill! Kill! and Beyond the Valley of the Dolls). The two lead characters embark on a road trip from Philadelphia to Miami during which “cruising bars ensues as does the potpourri of a severed head in a hatbox, a bitter ex-girlfriend, a mystery briefcase and an evil senator.” Coen expects to start filming this summer, so the two leads should be cast relatively soon.

Irish director John Carney has established a signature style of intimate, semi-“musical” dramas about characters who are obsessed with music in three films in particular: Once (Certified Fresh at 97%), Begin Again (Certified Fresh at 83%), and Sing Street (Certified Fresh at 95%). Those three films may have set Carney up to be an ideal choice for Paramount Pictures, as the studio’s musical biopic about the 1970s pop sensation the Bee Gees recently lost both its director (Kenneth Branagh, due to scheduling conflicts with Belfast) and screenwriter. Along with Carney as director, the Bee Gees biopic also has a new screenwriter in John Logan, whose filmography includes Martin Scorsese’s Hugo (Certified Fresh at 93%) and Ridley Scott’s Gladiator (Certified Fresh at 77%). Barry Gibb, the last surviving member of the brothers Gibb, will serve as the musical biopic’s executive producer. The Bee Gees biopic is just one of almost a dozen such projects that are either nearing release (Elvis on 6/24/2022 and I Wanna Dance with Somebody on 12/21/2022), or preparing for production.

Actress and singer Rachel Zegler is only 20 years old, but in a short time, she has landed a series of impressive roles, including the lead role of Maria in Steven Spielberg’s West Side Story (Certified Fresh at 91%), an unknown role in Shazam! Fury of the Gods (12/16/2022), and the title role in Disney’s live-action remake of their very first animated feature, Snow White. Following a week in which Zegler made the news for the question about whether or not she’d be attending the Academy Awards (she eventually did, as a presenter), Zegler has landed another big project, as she will voice the lead role of Princess Ellian in an animated musical for Apple and Skydance Animation called Spellbound, the second such collaboration between the two companies after the upcoming Luck (8/5/2022). Zegler’s character will have to go on “a daring quest to save her family and kingdom after a mysterious spell transforms her parents into monsters and threatens to cover Lumbria in darkness forever.” Spellbound is being directed by Vicky Jenson (co-director of Shrek), working from a screenplay co-written by Linda Woolverton (Maleficent, Rotten at 54%) and with music by eight-time Academy Award winner Alan Menken (Aladdin, The Little Mermaid, Beauty and the Beast).

Eddie Murphy had something of a non-Shrek comeback in 2019 with the Rudy Ray Moore biopic Dolemite is My Name (Certified Fresh at 97%), which received several awards or nominations. Three years later, Murphy is now in early negotiations for another biopic just as steeped in 1970s pop culture as Dolemite. If the deal works out, Murphy will star in a film about musician George Clinton, the leader of 1970s funk innovators Parliament-Funkadelic. Producer John Davis (who also worked with Eddie Murphy on Dolemite is My Name) is currently “tying down rights with the Rock and Roll Hall of Famer and Grammy Lifetime Achievement Award winner” (George Clinton), and then the focus will shift towards recruiting writers (and later, a director). Eddie Murphy is also producing and has a three-picture deal with Amazon because of the success of Coming 2 America (Rotten at 49%), but it’s not yet clear whether or not this George Clinton biopic will be made specifically for Amazon.

At the Academy Awards Sunday night, Uma Thurman, Samuel L. Jackson, and John Travolta reunited on stage with a suitcase for a Pulp Fiction (Certified Fresh at 92%) reunion and a little bit of dancing. As it turns out (which they probably already knew, but just hadn’t announced yet), Jackson and Thurman will soon be working together again in a comedic thriller called The Kill Room. Jackson will star a a hitman’s boss who gets involved with a fancy arts dealer (Uma Thurman) in “a money laundering scheme that accidentally turns the assassin into an overnight, avant-garde, sensation, one that forces her to play the art world against the underworld.” (The third lead role of the hitman has not yet been cast.) The Kill Room will be directed by Nicol Paone (Friendsgiving, Rotten at 19%), working from a screenplay by TV documentary producer Jonathan Jacobson.

Comic books and movies may share some surface similarities (storyboards for movies often look like comics), but the pacing and the time comics have to tell their stories means that movie adaptations are often quite different from their source material. That can even extend to new characters made just for the movies (S.H.I.E.L.D. agent Phil Coulson was created for the MCU, for example). For the movie adaptation of the DC Comics superhero Blue Beetle, the writers apparently did something similar, because Sharon Stone has been cast in Blue Beetle as the film’s villain in a role that is a “new creation.” Having said that, the character’s name is Victoria Kord, which hints at a connection to the second Blue Beetle (in the comics), Ted Kord. This Blue Beetle movie, however, isn’t about Ted Kord, and will instead tell the story of the third Blue Beetle, Jamie Reyes, who will be played by Cobra Kai star Xolo Maridueña. Mayans MC actor Raoul Max Trujillo was also cast in Blue Beetle this week as the villain Carapax the Indestructible Man. Blue Beetle is being directed by Angel Manuel Soto (Charm City Kings), and Warner Bros. has scheduled the film for a theatrical release next summer on August 18, 2023.

Although he’s drawn some criticism in recent years for his prolific slate of direct-to-video projects, Bruce Willis remains a legitimate A-list movie star, whose credits include Die Hard (Certified Fresh at 94%) and its sequels, Quentin Tarantino’s Pulp Fiction (Certified Fresh at 92%), and M. Night Shyamalan’s The Sixth Sense (Certified Fresh at 86%), among many others. Hollywood insiders and fans alike were saddened by the revelation this week that Willis is suffering from a communication disorder called aphasia, which makes remembering words and language difficult and/or impossible. Bruce Willis’ family made an announcement on his behalf that he is now retiring from acting as he continues to struggle with the symptoms of aphasia, “which is impacting his cognitive abilities.” The messages of sympathy for Willis have come pouring in from everyone, including his Pulp Fiction co-star John Travolta, his Sixth Sense co-star Haley Joel Osment, and even some of the directors of those recent direct-to-video projects. Meanwhile, the Razzie Awards, which made a special category called “Worst Performance by Bruce Willis” rescinded the Razzie in a statement this week. The Weekly Ketchup normally covers the movies that will likely be made soon, but this week, we close on a different note. We won’t be getting any more John McClane movies, and directors like Tarantino and M. Night Shyamalan won’t be able to reunite with Bruce Willis on any future projects. We wish Bruce Willis and his family the best.