Sixth time is the charm for the Transformers franchise, as Bumblebee looks to be the first Fresh installment in the series. Starting with the 2007 original, the Michael Bay-helmed series has only managed Rotten Tomatometer scores, with an average of 29%. Now, with a change in director and nostalgic setting, the new prequel is a wholly enjoyable throwback, according to the first wave of reviews – as of Monday morning, it was at 95% on the Tomatometer with 21 reviews logged. Not everyone agrees this is the best Transformers movie ever, since the first one has its fans, but there aren’t really any complaints here. Writer Christina Hodson, director Travis Knight, and Hailee Steinfeld seem to have delivered the Transformer goods.

Here’s what the critics are saying about Bumblebee:

So the Transformers series is back on track?

[Christina] Hodson layers in a sense of wonder and discovery that effectively recaptures the innovation and energy of the 2007 original.
– Justin Lowe, The Hollywood Reporter

Is it the best of the series?

The best Transformers movie so far, going all the way back to the 1986 animated film.
– William Bibbiani, The Wrap

The most human Transformers movie yet.
– Robbie Collin, The Telegraph

The film’s noticeably more humorous tone is also an improvement upon its predecessors, which typically tend to be overly self-serious.
– Justin Lowe, The Hollywood Reporter

So fans of Transformers in the ’80s will be happy?

Bumblebee is basically the movie that fans of the 1980s animated series wanted all along.
– Peter Debruge, Variety

Bumblebee is the live-action Transformers movie we all wanted in the ’80s.
– Fred Topel, We Live Entertainment

Does it ever feel like just more of the same?

If you hated the backyard scene in Transformers, there’s a lot more of that in Bumblebee.
– Fred Topel, We Live Entertainment

Is it just an E.T. wannabe?

Bumblebee is an ’80s movie through and through, not just in terms of its period setting but also in its execution, establishing a tone and pace reminiscent of your typical Amblin production of that era and of teen-driven genre flicks like WarGames and Short Circuit.
– Jim Vejvoda, IGN

The 1987 soundtrack goes a long way towards making Bumblebee feel like a film from the summer of Adventures in Babysitting and Harry and the Hendersons.
– Fred Topel, We Live Entertainment

Knight’s plot lifts – E.T., The Iron Giant — are transparent, but at least he lifts from the best and makes warm work of the job.
– Kevin Harley, Total Film

How is Hailee Steinfeld?

Steinfeld grounds Bumblebee beautifully, with a rich and specific performance that never once treats the bizarre sci-fi events with ironic detachment or cynicism.
– William Bibbiani, The Wrap

And what about John Cena?

The movie’s most memorable human character is played by John Cena…he also brings a welcome sense of humor to the mix.
– Peter Debruge, Variety

It’s John Cena, as walking side of beef Agent Burns, who proves the most flat-out enjoyable.
– James Dyer, Empire

His performance as a military man is about as subtle as a Hulk Hogan leg drop to the face…the transforming robots are more believable.
– Luke Y. Thompson, Nerdist

Does Bumblebee have a memorable villain?

Bassett, in particular, seems to be having the time of her life in the role of villain, manipulating the humans to do her bidding with an ease that makes sense, because it’s Angela Bassett, after all.
–  Liz Shannon Miller, IndieWire

So director Travis Knight was a good choice?

In a better, truer cinematic universe, Travis Knight would have been in charge of the Transformers franchise all along.
– Phil Hoad, The Guardian

Do the special effects still amaze?

You can actually appreciate the transformations here without them devolving into digital blurs of a million moving parts.
– Jim Vejvoda, IGN

There are many scenes where giant robots fight each other, and in those scenes, you can actually see what’s happening.
– Liz Shannon Miller, IndieWire

For arguably the first time in a Transformers film, there are moments when you forget you’re looking at a CG model, and see only the character.
– Luke Y. Thompson, Nerdist

Is there anything wrong with Bumblebee?

Even the most ardent ’80s nostalgists may wonder at a certain point how many Breakfast Club shoutouts and Smiths T-shirts are enough.
– Justin Chang, Los Angeles Times

I get it! It’s 1987! If Bumblebee was an ’80s reference drinking game you’d be dead from alcohol poisoning by the midpoint.
– Jim Vejvoda, IGN

Are we left begging for more?

If this is where the new Transformers franchise is headed, then let the transformation continue.
– William Bibbiani, The Wrap

This retooling is snappy and wholesome enough to suggest we might still be watching [the franchise] in our self-driving cars.
– Phil Hoad, The Guardian 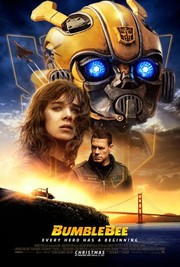 #1
Adjusted Score: 101.406%
Critics Consensus: Bumblebee proves it's possible to bring fun and a sense of wonder back to a bloated blockbuster franchise -- and sets up its own slate of sequels in the bargain.
Synopsis: On the run in the year 1987, Bumblebee finds refuge in a junkyard in a small Californian beach town. Charlie... [More]
Starring: Hailee Steinfeld, John Cena, John Ortiz, Jason Drucker
Directed By: Travis Knight

Clarice Star Rebecca Breeds: Series Is a Step in the Evolution of The Silence of the Lambs Heroine