Binge Guide: 5 Shows to Watch If You Love Dark

The German sci-fi hit on Netflix has a loyal (and vocal!) following. Do you love it? Here are 5 other titles to consider binging if you've devoured all three seasons.

Dark, the first-ever German series produced by Netflix, just released its third and final season and, more importantly, won our recent bracket competition to crown the best original Netflix series. So if you’re a fan of the time-traveling mystery series and you’ve already checked out that other Netflix sci-fi hit it’s often compared to, Stranger Things, here are five more titles Rotten Tomatoes has picked out for you, presented by Naz Perez, that will hopefully brighten — or darken — your next few binge sessions. 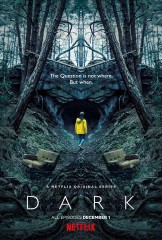