“My show is like the charcoal,” star and co-creator Pamela Adlon says of her emotionally raw FX series.

The key art poster for the first season of Better Things suggested exhaustion. Star and co-creator Pamela Adlon‘s semi-autobiographical story of raising three kids as a single parent while also working as an actress had caused her to plant face down on the bed in just her underwear and T-shirt with no time to even take off her shoes. 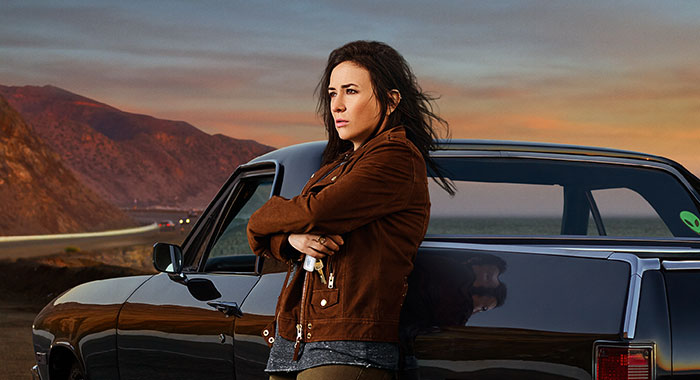 The images for the final season, which premieres February 28 on FX, seem more hopefully. Adlon’s Sam, now with her kids older and feeling more cemented in her own life, leans against her black El Camino and stares into the distance, like she’s come to the end of that journey and she’s pondering what’s next.

Adlon credits FX executive vice president of marketing Stephanie Gibbons for the images, this last one going with the theme of “the road ahead.” She tells Rotten Tomatoes, “It’s a great metaphor for the way the season goes and ends up and, and for Sam as a final act.” 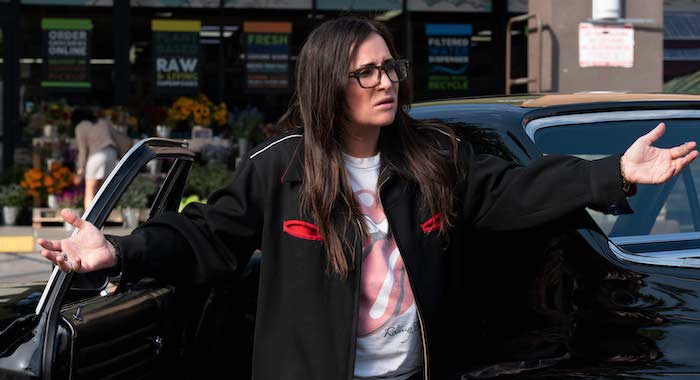 After the fourth season’s finale, which saw Sam gain closure from her messy divorce by paying off her ex and ending any real contact with him, the fifth season seems to be about life-changing events, be it growing up and making amends with parents, or even death.

“I really didn’t understand where I was gonna go with the stories after the shutdown,” Adlon said, adding that while she made a point of not discussing COVID because it would date the show, she did want to showcase that the world “is living in a different kind of reality.”

She found other ways to reflect society’s mental shift. Instead of Sam nagging her mother Phil (Celia Imrie) to clear off some space in her house, Adlon said, “Phil’s the one who’s de-hoarding. And that’s what we all went through. And we all went back to basics; and we all were taking stock of our lives.” 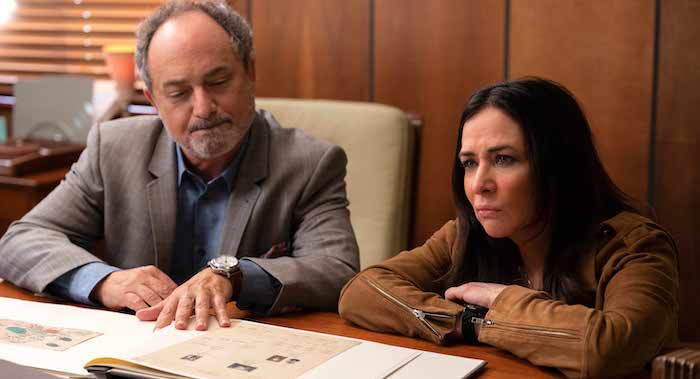 “All of this s–t we’ve all gone through in the past, really like five or six years, it’s madness when you’re dealing with it on your own,” she said, explaining that her show “is a way to get all of those feelings out” and going so far as to compare it to the activated charcoal people are given when they need to expunge a poison from their body.

This season, as Sam gets into her family’s genealogy with her brother Marion (Kevin Pollak) and tries to get her finances in order (again, with the aid of her more financially savvy brother), her children and mother also evolve; although, in true Better Things fashion, it may start with some devolving. 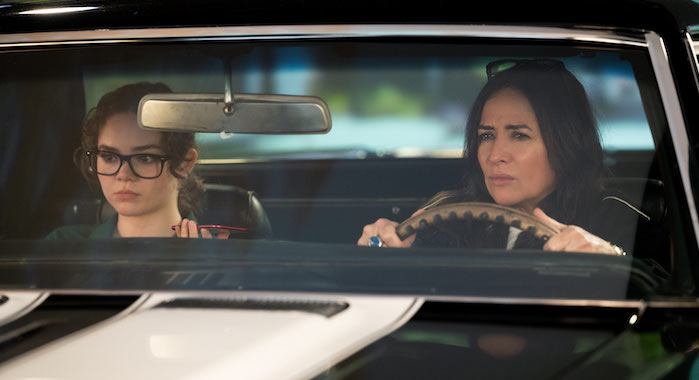 Middle child Frankie (Hannah Alligood), who has felt misunderstood and lost in past seasons, now seems content with some current life choices that include graduating high school early and working at a supermarket. Frankie is also keenly aware of gender identity and the systemic lack of societal understanding of it, fighting every chance to be labeled or not-labeled that it’s hard to even know which pronouns to give the character for this article.

Meanwhile, eldest daughter Max (Mikey Madison) has (kind of) seen past her years of entitlement and grapples with some heavy adult decisions this season.

“She’s had all of these kind of crushing disappointments about her future and all of this really painful uncertainty,” Madison said of her character, who didn’t find college a good fit and also had trouble making photography her passion. “It made me happy that she came together with her mom. I think that they have a different understanding of each other now. And I also think, like, when you’re young, and when you’re in pain, you take your anger out on those that are closest to you or those that are like the safest.” 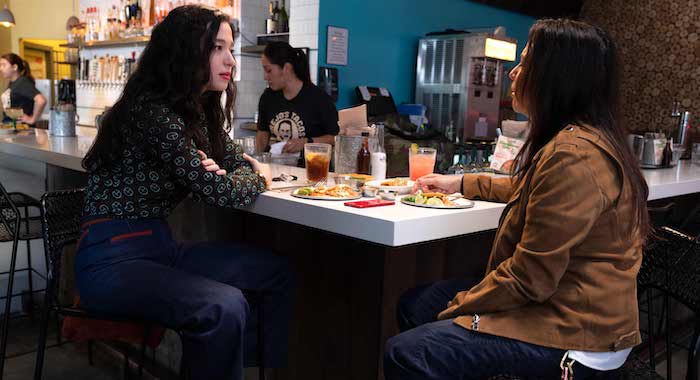 Now, as Max is 20, Madison says “they have more of a friendship. And Max takes on some of those “mom” qualities and takes care of her siblings in a really mature, evolved way.”

But just as the eldest two come into their own, it’s youngest daughter Duke’s (Olivia Edward) turn to enter the age of teen-age malaise. Once a happy kid who seemed up for anything and who was sensitive enough to have a spiritual connection with people in the after life, Duke’s showing signs of depression and — as Edward puts it — “has a lot of fear that she lost her sunshine.” 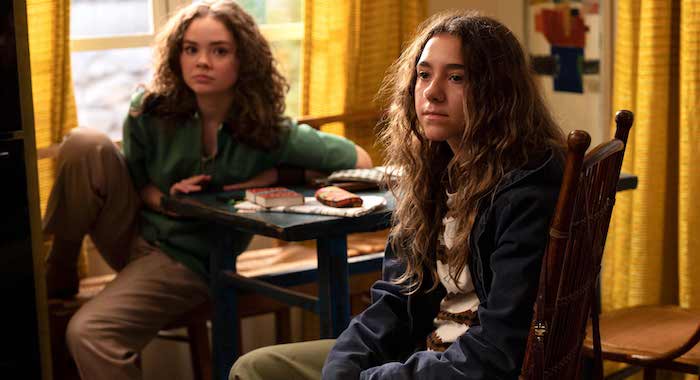 “She’s just at the age of 13, which is very much about self-discovery,” Edward said. Perhaps brought on by a recent vacation with her dad, Duke develops twin additions: one to her phone and one to vaping.

Once someone who would have loved going into an antique shop, Duke is terrified to enter one with her friend Pepper (Emma Shannon).

“Part of not wanting to go into that shop is fear of not feeling anything,” Edward said.

This season is largely about reclaiming those feelings, not just for Duke, but for other members of the Fox family. Sam’s mom, Phil, becomes brave enough to delve into her past and connect with people she knew in her native Britain via the great communication system that is social media. She ends up making some life-changing discoveries of her own.

“Too often, people at my age think that that’s the end,” Imrie said. “And with Phil, it quite clearly isn’t. It’s a whole new chapter.” 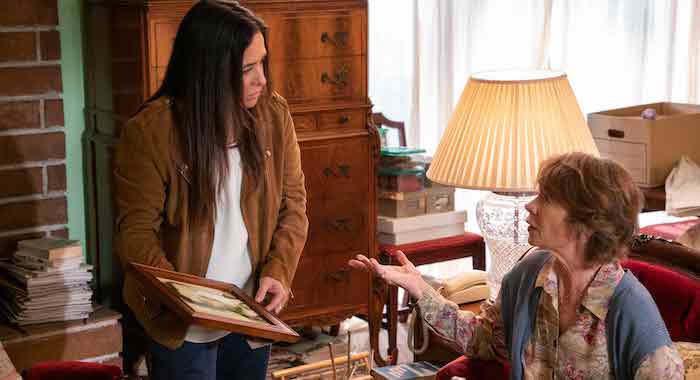 The series also teases a new chapter for Sam. A former child actor, just like the actress who portrays her, Sam has always been someone dedicated to her career even if it’s not dedicated to her. Through its run, the series has shown her doing scenes she’s not comfortable with, because she’s that kind of team player, as well as fighting for better safety measures on set — an on-going topic in Hollywood and something that reverberates into this season when Sam’s given a plum directing job. She also turns down work, which as anyone who works freelance knows, is terrifying.

Adlon says that she had to turn down several projects to create Better Things and that “it really strikes me that I had to do that in order to make my show and be where I am right now. But it was really f—ing scary when I did that.”

But, she said, “I had to focus. And be a pioneer. Where I am right now is the future for myself.”