Alicia von Rittberg stars as a young Queen Elizabeth I and Tom Cullen as the politically motivated Thomas Seymour in a look at the formative years of one of England's most frequently portrayed monarchs.

Nearly 500 years after his death, the fascination with English king Henry VIII’s Tudor dynasty and his wives and offspring doesn’t seem to be heading toward a standstill.

The past couple years alone have given us Amy Manson as the ghost of Henry’s most famous wife, Anne Boleyn, in the Princess Diana biopic Spencer, Jodie Turner-Smith portraying that same fallen queen in the eponymous AMC+ miniseries, and the hit musical Six that offers a modern retelling of all of Henry’s wives.

But what of the formative years of Henry’s three legitimate descendants, son Edward and daughters Mary and Elizabeth? The trio of half-siblings spent their early years as pawns as their father’s friends and frenemies jockeyed for power — often despite the safety and well-being of them or their mothers. This, no doubt, impacted how each of them reigned when they did successfully make it to the throne.

The new Starz miniseries, Becoming Elizabeth looks at the formative years of Henry’s most successful heiress: Queen Elizabeth I. Setting the story in her teen years in the aftermath of Henry’s death, it looks at how the then-princess (portrayed by Alicia von Rittberg, herself a German countess) came into her own to learn who she can trust while also allowing our ostensibly more worldly eyes to dissect the political and social minefield she had to walk.

1. The Series Tells the Story of Elizabeth I’s Teen Years 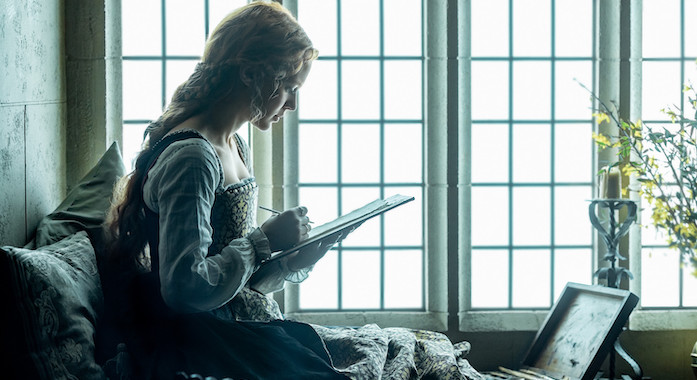 Elizabeth was in her mid-teens when her father died and she relied heavily on her latest step-mother, Catherine Parr (portrayed by Jessica Raine), for guidance and lodging.

“I tried to develop a blind spot for Elizabeth as the queen we know because I wanted to not be influenced by something I do not know yet, as a character,” Von Rittberg says of the young monarch and what life had in store for her.

She says there was little research available on Elizabeth’s adolescence, so she practiced skills she knew she would probably have had learned, like horseback riding, playing the piano, and dancing. And she drew on her own memories of being a young girl falling in love for the first time.

2. Thomas Seymour Is a Predator 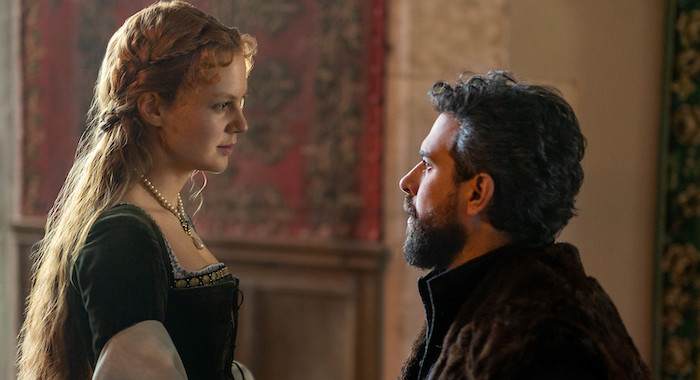 Things became more complicated when Catherine married Thomas Seymour, Elizabeth’s half-brother’s uncle and who is depicted here by Downton Abbey’s Tom Cullen. He took a special interest in Catherine’s ward, most likely for his own political gain even if that wasn’t obvious to a naïve child.

“I used to think that in history, people had a more ruthless personality and people didn’t have the same kind of humanity that we have,” series creator and executive producer Anya Reiss tells Rotten Tomatoes. She says she was operating under the assumption that “now we’ve all evolved to this place where we care if someone cheats on us and we know that you shouldn’t use children and that you shouldn’t murder colleagues in the middle of London.”

But, after doing her research, she learned that “there are some truths that always remain true” and that “we get away with too much going like ‘Oh we’ve evolved to this point’ rather than realizing that things have always been this way, and people have always suffered the consequences of them.”

Executive producer George Ormond compares this relationship’s historical significance to his previous work on the Hulu miniseries National Treasure. That story is about a British actor (Robbie Coltrane’s Paul Finchley) who played a beloved TV character so well that it impacted how society saw him — especially after he was accused of multiple counts of rape.

In this story, Ormond says, “there’s no doubt that Thomas’s relationship with Elizabeth was really damaging for her and really influenced how she felt about people and how she viewed the relationships around her for her whole adult life.”

But also, he says, Thomas is “incredibly charming.”

“He’s very funny, he pays attention to her, he listened to her, he asked her questions about herself,” Ormond says. “And, in a world where she’s surrounded by people who are so obviously trying to use her for their political ends, I think that’s very appealing for her.”

3. Half-Siblings Elizabeth, Edward, and Mary Try To Get Along 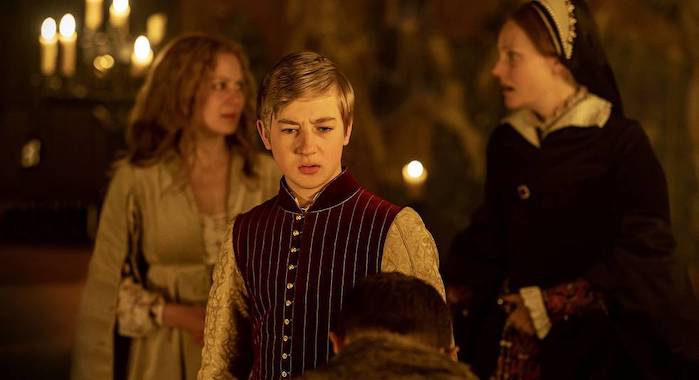 Becoming Elizabeth creator Reiss laughs that there’s no way you can survive having Henry VIII as a father without the need of some intense therapy.

Both Mary (as portrayed by Romola Garai) and Edward (as portrayed by Oliver Zetterström) are part of this story, with Ormond pointing out that, especially because they all have different mothers, the siblings are “very much like a modern family, where they have to get along with each other, and they love each other and hate each other at the same time.”

During the show’s panel during the winter Television Critics Association press tour in February, von Rittberg said that Elizabeth’s relationship with her father was “too difficult to get it right, I guess.”

“Elizabeth was basically incredibly alone in this world and grew up without her mother, and I think her father gave her that last sense of security in a way,” the actress says now of how the princess must have felt upon the death of the man who ordered the killing of her mother, adding, “It’s a question of ‘Where do I belong?’ that suddenly pops up as well. And that can be incredibly scary when you’re that young.” 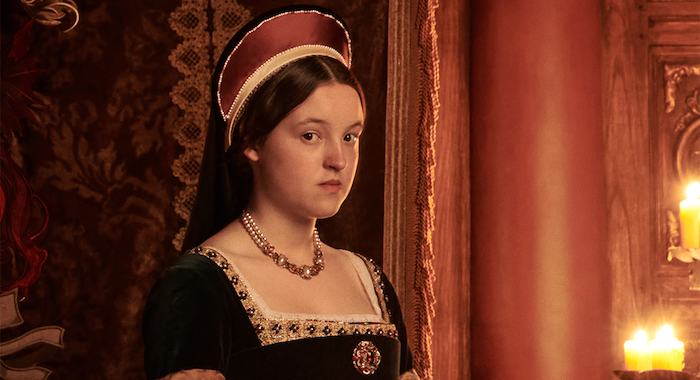 Elizabeth isn’t the only young girl who gets caught up in the power plays of adult men. Unless you’re a fan of the early works of Cary Elwes and Helena Bonham Carter, Jane Grey (portrayed here by Game of Thrones’ Bella Ramsey) is now mostly a footnote in history thanks to her brief reign between Edward and Mary that came to a tragic end.

In Becoming Elizabeth, audiences see a timid and awkward Jane placed into Catherine Parr’s care by her own scheming relatives. Reiss said during the TCA panel that one of the fun things about researching this show is that she got to “do people’s stories before they hit the history books for being famous.”

“It’s all these bits of history that you never would really know because it’s thrown in a footnote later,” she said. “You have no idea where they came from, or that they were related to this person, or they knew that, or they’d seen this.”

Von Rittberg adds then that this “is basically a coming-of-age story set in a political drama, set in a family drama.” 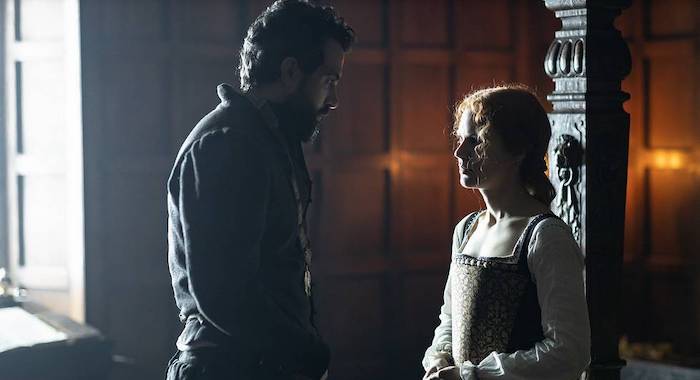 History is often used as a setting for lust and romance as well as a contemporary look at politics (see also: The CW’s Reign and Showtime’s The Tudors). This doesn’t always mean everything you see on TV is historically accurate.

“History is an interpretation of a series of events, and this is Anya’s interpretation,” Cullen tells Rotten Tomatoes. “The show is historically accurate. Everything that happens in the show happened for real. But in some ways, I really felt that this show is a very contemporary look at at a young woman figuring out who she is.”

He adds that he believes our obsession with this time period is because with the Tudors, “life and death really sit on a very thin line.”

6. So Is Thomas Seymour Evil? The Story Here Suggests Elizabeth I Is a Survivor 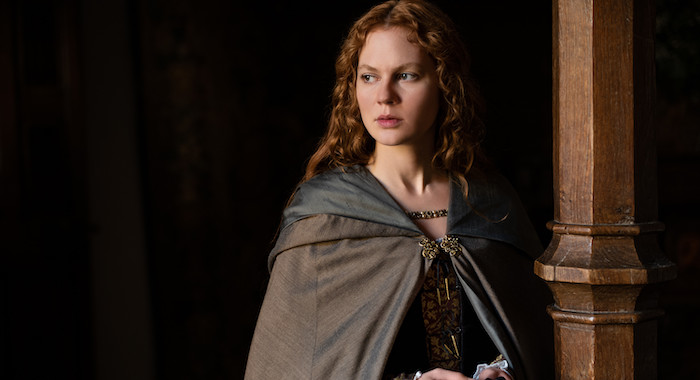 Reiss told journalists during TCA: “I don’t, really, as a rule believe in villains. I believe in people doing very bad things, but I’m not really interested in anyone being villains or heroes in this. I’m just interested in those real people and trying to make a world of that.”

Von Rittberg echoed that sentiment during the panel, saying that the show is meant to look “these untouchable figures from books and films, but making them palpable; making them so human that you understand how they grew up, how they were children, how they were raised, how they became these icons.”