As the slayer of Evil Exes shuffles awkwardly back into theaters for a special – and enhanced – one-week engagement, director Edgar Wright reflects on making a cult hit, assembling a "super" cast, and what Scott Pilgrim means to him now.

To mark its 10-year anniversary, cult classic Scott Pilgrim vs. the World is getting a special theatrical re-release on April 30. And it returns to theaters looking – and sounding – better than ever: The film has been re-imagined in Dolby Vision and Dolby Atmos, and will play in select locations for a single week. (And yes, we know it’s been 11 years, technically, since it hit theaters – but the pandemic scuttled plans for an anniversary re-release last year.)

To celebrate the return of Scott, Ramona, the Evil Exes, Knives, and Sex Bob-omb, director Edgar Wright sat down with Rotten Tomatoes for an exclusive and extended deep dive on how he and his creative team brought Bryan Lee O’Malley’s beloved comic strip to life. Why was Cera the perfect “Scott”? How did he convince Beck to help out with the music? And whose teeth were they on the floor, lost in all those coins?

Wright reveals all in the extended interview above – and check out highlights from the oral history below. 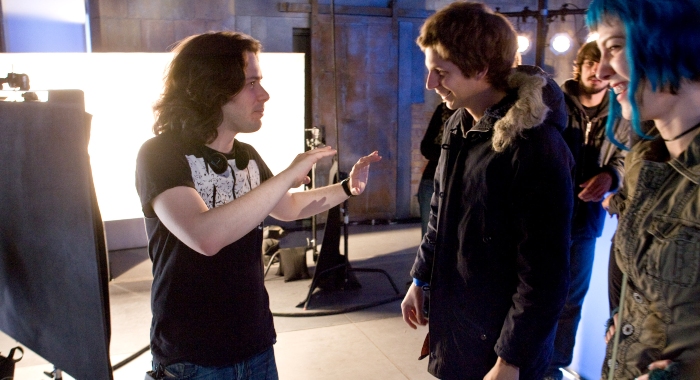 “They cornered me and they said, ‘It’s like John Hughes meets Kill Bill.’ I said, ‘Well, I like that idea.’”

“Scott Pilgrim came into my life after a screening of Shaun of the Dead. It must’ve been, I guess, in the summer of 2004, and the producers Adam Siegel and Jared LeBoff, who were producers on Scott Pilgrim, cornered me, and they had a copy of the first book, which was the only one out at the time, Scott Pilgrim’s Precious Little Life: Volume 1, and they cornered me and they said, ‘This is your next movie.’ I was like, ‘Okay!’ They said, ‘It’s like John Hughes meets Kill Bill.’ I said, ‘Well, I like that idea.’ So they gave me the comic, and, they were half right, because I did make it into a movie, but it wasn’t my next movie – I made Hot Fuzz next – but I really responded to the material.

I loved the metaphor of the book. Bryan Lee O’Malley had written this book about how dating life and relationships and having to be mature in relationships was like a battleground; charting this journey to being with the woman who you think you’re in love with is like a tournament in a martial arts film. I thought that was really interesting, the idea of fighting for a relationship, dealing with the baggage of a new partner, all of those things that you deal with in real life, but to do it in a really fantastical way.” 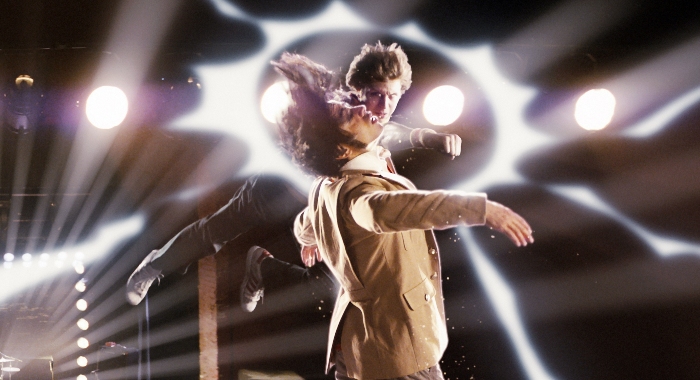 “If we’d have cast super-fit Zac Efron, it’s not quite the same movie.”

“Michael was the only person that I thought of for Scott Pilgrim. Anybody that was more – and this sounds like a sort of criticism of Michael, but it’s not – but anybody who was more obviously studly and macho, didn’t seem to me like the right thing for Scott Pilgrim. If we’d have cast super-fit Zac Efron, it’s not quite the same movie, because it would seem like Zac Efron could handle himself in a fight, because he’s like ridiculously ripped, whereas it was more funny and more relatable watching somebody like Michael A) be like a Romeo, and B) be like this amazing fighter. That to me was inherently funny.”

“She came in and auditioned against some more established people and just wiped the floor with them.”

“Brie Larson had been like a sort of child actor and even a teen pop star, but I remember she came in and auditioned against some more established people than her, and just like wiped the floor with them. Her audition, if you’ve ever seen it on the Blu-ray, was just like extraordinary – and she was like 19. I remember I was in the room when she auditioned, and I was with Jared LeBoff, and we looked at each other and it was like, ‘We gotta cast her.’ Like, she was just amazing.” 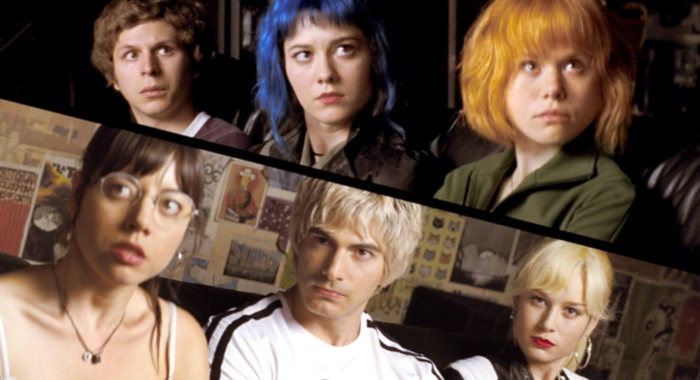 “They used to call me ‘the blink Nazi’ on set.”

“I wanted it to feel surreal, a bit like anime, and in animation, people don’t really blink so much. There’s [also] a thing, like Michael Caine, his school of acting, page one is, ‘Don’t blink on a close-up,’ it’s like classic Michael Caine technique: ‘Never blink on a close-up, it disempowers you, and it makes you look weak.’ And it’s true, if somebody doesn’t know their lines, they’re blinking like crazy, so I sort of thought it was a good thing [to ask for no blinking]. If you look at Brie Larson’s performance, particularly, she’s so strong and so unblinking, so we got into this thing not blinking during takes, and they used to call me ‘the blink Nazi’ on set.” 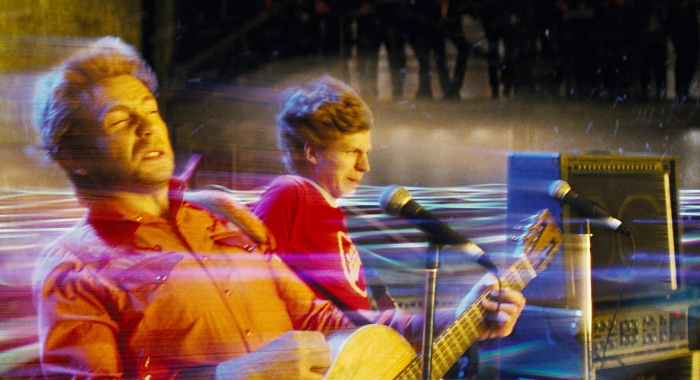 “I thought maybe Beck wouldn’t wanna do it, because he’s Beck and it’s too small for him.”

“Nigel [Godrich, the movie’s composer] was the one who said, ‘You should just ask Beck – Beck would love doing this; he would love reconnecting with his low-fi slacker roots.’ And so, it was Nigel who suggested Beck [write the music for Sex Bob-omb], and I thought maybe Beck wouldn’t wanna do it, because maybe he’s Beck and it’s too small for him. But he loved it. Over one weekend, he basically did this demo of, like, 27 songs or something crazy.

We’d put artwork all around his studio, in his house, and he did it with like an 8-track, and it was just him and one other musician, Brian LeBarton. I remember on Sunday night Nigel texted me and said, ‘Hey, we’ve got something,’ and then we went round, he had the CD, and then we drove around Los Angeles in the car listening to Sex Bob-omb, and basically that’s the only real work that Beck did on the movie. Because here’s the thing: the demos that he’d done were exactly the right sound, and Nigel said, ‘Why would you finish them anymore than this?’ – because this is what Sex Bob-omb could do. Sex Bob-omb wouldn’t sound super polished, why don’t we just use these?” 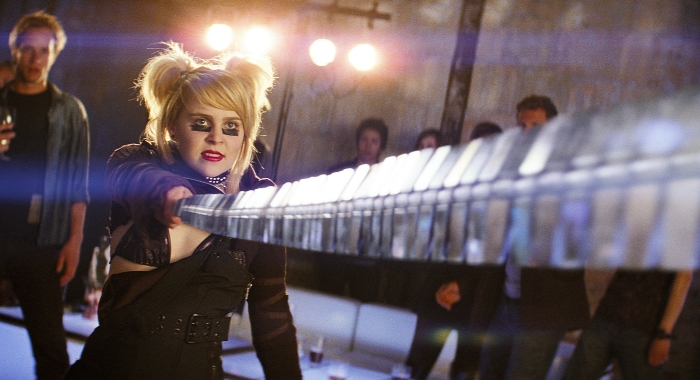 “If you’re gonna make a musical, or a martial arts film, no two fights should be the same.”

“One of the things I really liked about martial art films from the ’70s and ’80s – the work of Jackie Chan particularly, and also early John Woo films – is that they had this kinda structure that was like an MGM musical. If you watch a Jackie Chan film from the late ’70s through the ’80s, you can see that there are elements where they’ve got the structure of like a Gene Kelly musical. So if you’re gonna make a musical, or a martial arts film, no two fights [or musical numbers] should be the same, the number of combatants in a fight should be different every time. There should be some new novelty every time, or some new setting, or something that makes it interesting. So we sort of had to think of it in those terms: the second fight, with Lucas Lee, isn’t really a fight with Lucas Lee, it’s Scott Pilgrim fighting his henchman, you know, like in a video game; the third fight is a face-off; or the fourth fight is not really between Scott and the ex, it’s mostly between Roxie and Ramona, and then Scott gets brought into it.”

“There’s amazing stunt work by doubles in the movie, but also everybody that’s in the fight scenes – Mary, Michael, Mae, Jason, Ellen – really worked so hard on those sequences. Probably my fondest memory of the entire shoot was actually before we started filming, the stunt training we did every morning with the stunt team – just working out with the whole cast was really funny. Just imagine doing a gym session with Michael Cera and Jason Schwartzman, and Chris Evans, and Brandon Routh, and Mary Elizabeth Winstead.” 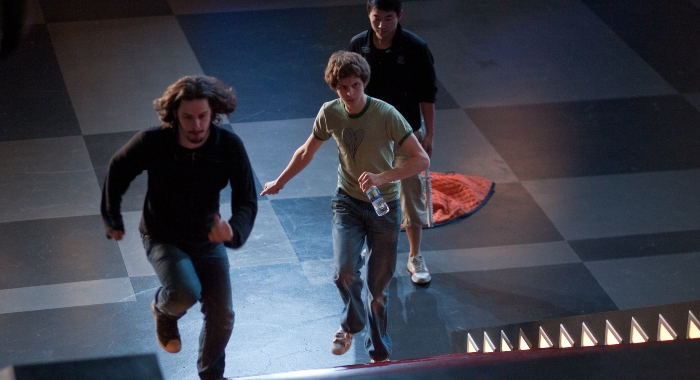 “Michael Cera was incredibly safety conscious, as you should be if you’re doing fight scenes, but like maybe above and beyond. If he was doing a scene with a sword, he would have a short version of the sword, and he would be swishing around with the short version, and then for the effects part we would get a stunt double and bring in the long version, and be swishing that around.

Michael was doing this take where he’s fighting the henchman in the club, and Michael is saying like, ‘Am I… I’m not too close, everybody okay?’ and they’re like, ‘Yeah, you can’t hurt us, go as close as you dare, it’s gonna be fine, don’t worry.’ So Michael’s doing his thing, being very conscientious. He then goes off to get a coffee, we do the take with the long sword, and then in the first take – bam! – one of the stuntmen gets hit in the teeth with the long sword and it knocks the teeth out. Then the teeth are on the floor, but also on the floor are thousands of coins. One of my most surreal memories of the shoot, is like myself and the entire stunt team looking on this nightclub floor for two front teeth in the middle of a bunch of coins.” 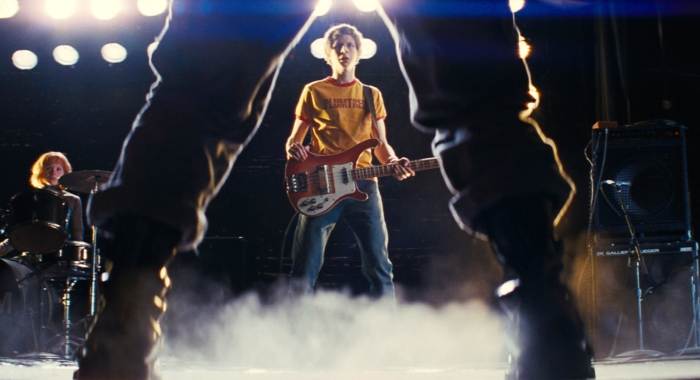 “I don’t understand how we made that movie.”

“I re-watched Scott Pilgrim with my editor Paul Machliss, who was one of the two editors on the movie, and who’s done my recent film, Last Night in Soho, and I sat there afterwards and I was thinking, ‘How the f–k did we make that?’ It’s not so much it’s something that you feel new about [when you watch it again], it’s more like: ‘Wait, I don’t understand how we made that movie!’”