In the third part of our series, the hard work of RT's founders starts to pay big dividends.

To commemorate the 10th anniversary of Rotten Tomatoes, we asked some of the founding members of RT to share their memories. What follows is an oral history of Rotten Tomatoes’ early years, from the people who were there at the beginning. (Check out part one here and part two here.) In this installment, we cover the early to mid 2000s, a time during which the original RT crew’s efforts began to pay off — big time.

After surviving the dotcom boom and bust, Rotten Tomatoes began to establish itself as a key destination for movie fans. As RT grew, its staffers began to rub elbows with some of their heroes..

Patrick Lee: We started working with Jet Li to do his website back when we were doing Design Reactor. We continued hosting and maintaining it even during Rotten Tomatoes. As a thank-you to all of us for helping out with the site, he invited us all to his house in LA. We ended up doing a huge caravan of cars driving down to LA from the Bay Area. There were about 20 of us that went.

When we got to his house, he first gave us a tour of his place. Then after that, he knew we’d probably want to take pictures with him, so he had everyone go to the front of his house. We did a few group pictures, then he happily had us take individual pictures with him. After that, we went back inside. He knew that most of us would want him to sign stuff, so he offered. Almost everyone whipped out some DVD or other Jet Li-related item and he went through and signed everything. Then, with all of us sitting around his study, he was like “So, do you have anything you want to ask me?” Everyone started asking him all sorts of questions. He answered them for well over an hour! Then, to top it all off, he took us all to a very nice Mongolian BBQ restaurant and treated us all to lunch.

He was one of my idols ever since Senh showed me Once Upon a Time in China
back at Berkeley and that just reinforced (times 100) my high opinion of him. We’re still working with him now at alivenotdead.com. And, even more amazing, he’s been spending the majority of his time promoting his charity, the One Foundation. 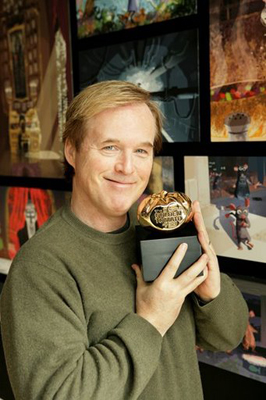 In addition, word of the site started to seep into mainstream consciousness — as well as some of Hollywood’s major players.

Patrick: Mark [Moran, a fellow RTer] and I, who were roommates at the time, are chilling at home. Mark is flipping through the channels and I come over and plop down on the couch. After jumping through a bunch of shows, he settles on The Daily Show with Jon Stewart. So we’re sitting there watching the show and laughing along, when he brings Mark Ruffalo on to interview him. During the course of the interview, Jon Stewart asks Mark, “So, have you ever heard of Rotten Tomatoes?” and then proceeds to explain the site and why it’s a good service.

Mark and I are freaking out. Our jaws are on the floor. We’re like, “Oh my God! Oh my God!” and trying to figure out who to tell! You cannot even begin to imagine how excited we were at the time. That was seriously one of the coolest things ever.

However, not everyone in the movie business was thrilled with the site…

Paul: There was the time that Ron Howard had someone from the studio call us repeatedly throughout the day because of the horrible reviews The Missing was getting.

In the fall of 2003, Rotten Tomatoes began its Certified Fresh program as a way of recognizing films that had received especially strong reviews. It also helped to promote the fact that the site, despite its name, was not inherently negative in its collective outlook.

Evan Cowitt (VP of sales): Certified Fresh began in discussions during October / November of 2003 after a meeting with Andrew Lin, who was then the head of online marketing for Fox Searchlight. Fox Searchlight had become RT’s first big customers having cut our first upfront big money deal. Certified Fresh was created as a way to get RT thought of by consumers and studios as being the “Good Housekeeping Seal of Approval” for movies. Our challenge was that since 60 percent was the low end for “freshness,” we thought that a higher threshold would need to be created in order to get them to put RT in the ads, and some superlative attribution was necessary, too. Andrew was instrumental in guiding our thinking on all of this.

Stephen Wang: The site was the creation of a group of movie lovers. People sometimes have the misimpression that Rotten Tomatoes is a negative site, but I think that RT has helped tens of millions of filmgoers discover new great movies in addition from avoiding the schlock. If anything, no other site does more to make casual movie fans into true cinema-lovers — where else will you find so many great reviews, news articles, and essays dissecting the smallest details of a movie and where else will you find such a great, huge collection of film fans blogging about films every day?

Evan: We created a few choices for the name, including “Super Fresh,” and then put them all up on the RT message boards. A vote was cast and “Certified Fresh” won out. Senh created a few image choices for the logo which we posted on the site for studios to use and also created the trophies for distribution to film makers and studio marketing departments. Each week when a film would become Certified Fresh, we’d create the trophy and ship it off to the appropriate folks. Additionally, we’d make calls to hopefully persuade marketers to use Certified Fresh in their ads. The trophies became a hit around town and over time coveted among execs — so much so that we began getting calls to find out “where mine is!” Brad Bird (pictured, previous page) sent a note after his trophy for The Incredibles stating, “I like all my produce and movies fresh.”

Paul Lee: There was the time we sent one of the first physical Certified Fresh awards (it was el cheapo acrylic back then) to Tina Fey at SNL for Mean Girls, which was the best-reviewed comedy of the year (I think). I think she actually called us to thank us for the award. A few days after that, we got a call from SNL asking if we could send a few more awards. Apparently, Lorne Michaels (who was an exec producer on Mean Girls) saw the Tomato award in Tina’s office and asked, “Why didn’t I get one?” So we ended up having to make a few more of the awards to send to New York. 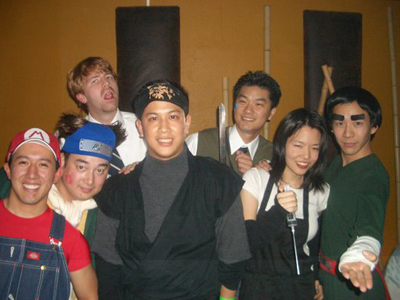 Rotten Tomatoes Halloween Party, 2004 (L-R): James Chen, Mark Moran, Tim Ryan, Stephen Wang, Paul Lee, Susan Nakasora, Patrick Lee.
Senh Duong: When I talked to [Dreamworks CEO] Jeffrey Katzenberg — I think he called to thank us for the Certified Fresh certification of Flushed Away — I didn’t know how I should properly address him, so I just went with “Jeffrey.”

Paul: There was the day that the phone rang in the office around 10 or 11 in the morning. It turned out to be Alexander Payne, the director of Sideways. Sideways was becoming a big sensation. It had opened limited with a 100 percent rating, and week after week, the movie would continue to expand and subsequently get more reviews yet it maintained a perfect score. It became a story in and of itself, and after five or six weeks at 100 percent, the move really busted wide open. Alexander Payne called the RT offices to thank us personally. Even though we weren’t responsible for how the reviews turned out, the fact that we were the source tracking all those reviews gave the movie a lot of attention it might otherwise not have gotten.

In 2004, Rotten Tomatoes was purchased by IGN Entertainment. Subsequently, for variety of reasons, a number of the original members began to seek out new ventures. Stephen Wong and Patrick Lee eventually moved to Hong Kong and founded Alive Not Dead, a site that encourages social networking and collaboration between artists. Former RTers Mark Moran, Boon Khoo, and Susan Nakasora also work for the company. Lily Chi became the CFO of Lithium Technologies, a company that shared office space with RT in Emeryville.

Still, the founders maintain strong feelings for what they helped to create.

Stephen: People have a negative impression of film criticism in the same way that they have an instant, un-informed impression about dentists. They point to the recent layoffs of newspaper film critics around the nation as a sign of the downfall — they miss the point. Film criticism has evolved into a greater beast — just look around and you’ll see more people talking about movies in more detail than ever before. The platform has just moved from a region specific newspaper to the global medium of the web.

Susan Nakasora: I’m quite happy with it. I had faith it would grow, but its success has exceeded my expectations. Of course, I still regularly check the Tomatometer; it’s a great consumer tool.

Stephen: There’s the mistaken impression that the Tomatometer is a quality rating telling you how good a movie is. Actually, I like to think of it as a confidence meter — the percentage likelihood that you’ll enjoy a movie. For instance 100 percent Fresh for Toy Story 2 doesn’t make it the best movie of all-time, rather that you’re almost guaranteed to enjoy the movie (and I think everyone can agree to that!). In fact, the Tomatometer is just a very useful gimmick that hopefully draws people into the site where so much more about movies can be discovered and dissected.

Lily Chi: I have always felt very fortunate to have had the opportunity to work for RT. It was a different kind of experience, and it was a pleasure.

Patrick: I’m very proud of what we accomplished and the fact that it’s one of the top 1,000 most trafficked sites in the world (according to Alexa). It’s a site that almost everyone has heard of. I still meet lots of folks out here in Hong Kong that have heard of and/or use the site! My hope is that it can keep on growing and improving.

Binh Ngo: It’s been an awesome ride. There were a couple of times when I thought RT wouldn’t make it, but a combination of luck, perseverance, and sticking together made RT what it is. Speaking personally, I’m really proud of where RT is today.