In the second part of our series, Rotten Tomatoes navagates the choppy waters of the dotcom era.

To commemorate the 10th anniversary of Rotten Tomatoes, we asked some of the founding members of RT to share their memories. What follows is an oral history of Rotten Tomatoes’ early years, from the people who were there at the beginning (click here for part one). In our second installment, find out how RT survived the ups and downs of the dotcom era — and emerged stronger than ever.

In January of 2000, Rotten Tomatoes officially incorporated as a business, and brought on Lily Chi as its chief financial officer. RT also got the venture capital it needed to keep going, as dark clouds were on the horizon in the dotcom industry.

Stephen Wang: By early 2000, it was already apparent that the site was of great use to many movie fans. It had been profiled in USA Today and Rolling Stone in addition to being mentioned online in many places.

Binh Ngo: We raised about $1 million-ish in venture capital in 2000-1. That funding allowed us to survive the coming dot-com bust that shuttered many early Internet companies.

Paul Lee: Timing was very important for us. We got the funding right before the whole dotcom industry imploded. That probably slowed down the growth of the online ad market significantly, but I think we all knew that online was the future, especially with regard to movie reviews. It was apparent that more and more people were looking up reviews on the Web, rather than reading them in their local paper.

Lily Chi: The investors were great. They had full faith in us and left us alone.

Binh: We weren’t without casualties, though. We had to trim staff from 20 or so people down to eight. The remaining eight hunkered down and continued to build the site until the Internet economy recovered. The executive crew of Pat, Senh, Stephen, and Lily did a great job leading the company through that tough time. 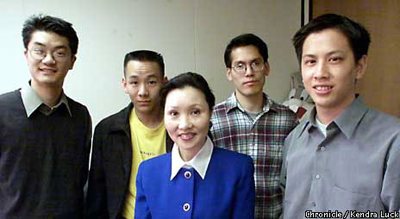 Rotten Tomatoes, 2000 (L-R): Paul Lee, Patrick Lee, Lily Chi, Senh Duong, Stephen Wang. (Photo by Kendra Luck of the San Francisco Chronicle)
Stephen: Prior to the dotcom crash, the site would have been self-sustainable from solely ad revenue which made pitching it as a business relatively simple. Unlike other sites, Rotten Tomatoes occupied a unique position of being the decision-making point for many moviegoers when figuring out what they wanted to watch in theaters so this made it extremely friendly for advertisers — at least in theory. The dotcom crash just meant that we had to work harder finding alternative sources of revenue like data licensing and affiliate sales.

With more stress around the office, there became an increasing need to blow off steam. Unifying traditions inculuded and annual trip to Las Vegas during Memorial Day Weekend and the RT Halloween party. Another was a shared passion for video games.

Lily: The annual RT Halloween party has always been a blast, and invitations became the hot ticket in town.

Paul: There was a period when half the office became addicted to Diablo 2. We’d do all-nighters playing the game together. Then we discovered that people were selling rare items they had acquired in the game on eBay and before we knew it, we were selling magical hammers and suits of armor to strangers on eBay for cold, hard cash. Patrick played so much, he sorta developed RSI.

Susan Nakasora (editor): For a while there was an RT guild in World of Warcraft, consisting of several current (for that time) and past employees, plus some friends. The guild’s tabard symbol was a shape that somewhat resembled a tomato splat. Binh was awesome — a gnome warrior who wore a deep sea diving helmet.

Binh: Dance Dance Revolution was a favorite party game. We played it in the office, and probably made our neighbors below us pretty angry.

However, as late hours began to take their toll, measures were instituted to get everyone in the office at the same time.

Paul: Everyone at RT was pretty much a night owl. Half the company would drift into work around 11 am and the other half by 1 pm. Lily was the only one who would be in at 9 am. Of course, we always got our work done, but most of the world had already done half a day’s work by the time we got started. So after several unsuccessful attempts to encourage people to come in earlier (it would happen for, like, three days before everyone reverted back to their usual schedules), Patrick instituted something called the Pig.

The Pig was kinda like an evil piggybank. People who came in after 10 am would have to pay a few bucks into the Pig. After 11, more sums would have to be sacrificed to the Pig. At the end of the month, all the funds in the Pig would be used for a company lunch and dinner. Needless to say, we had some nice lunches and dinners, but coming in around noon seemed to be more important than personal finances for everyone, with the exception of Lily.

Senh Duong: The one time I decided to come to work on time (8 am), there was an earthquake that shook the building and rattled the blinds for what seemed like an eternity (it was actually about 20 seconds). The only person at the office at that time was Lily. It took years before I could go to the office that early in the morning. At least that was my excuse for always being late.

In the case of Patrick Lee, there was no need to worry about being tardy to the office, since it became his unofficial place of residence.

Paul: Patrick didn’t just sleep there, he actually lived in the office. There was a period — 2003, I think — that could be described as RT’s darkest days. It wasn’t that anybody was unhappy about working there or didn’t believe that RT would become a viable business, but we had less than half of our initial funding left and revenues were growing a lot more slowly than we would have liked. At that point, there were just seven of us — Patrick, Lily, Stephen, Binh, Susan, Senh, and me. To conserve cash as much as possible, Patrick and I basically reduced our salary to zero and everyone else took a 50 percent pay cut. No one at any time considered leaving to find greener pastures.

So basically, Patrick and I were living off our savings, and one day, he had this idea that rent was his biggest expense. Using the justification that he was a neat freak (believe me, Patrick is borderline obsessive compulsive when it comes to cleanliness), he kind of wondered aloud whether he could just simply move out of his apartment and live in the office. For showers, he would take them at the Club One that was on the office grounds. And just like that, he was living in the office for like five or six months.

Still, even during the rough patches, there was an esprit de corps that kept the company going. 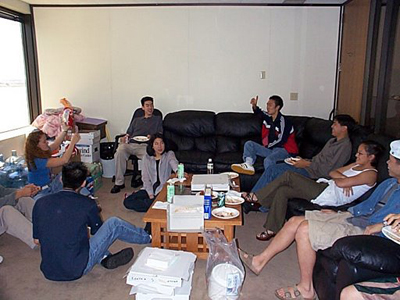 Pizza Party at the RT office, Emeryville, 2000.
Lily: RT was my first startup, and in the beginning it took me a while to adjust to the entirely different culture. But this period of time at RT was one of the happiest several years of my career. It was a great pleasure working with a bunch of young, talented kids who were very passionate about what they did. I liked the entire RT team just as if they were my own sons.

Susan: When the workload was heavy and the stress high, Binh and I would giggle for no obvious reason and make up horrible puns. The latter activity was confined to instant messages, to spare the rest of humanity.

So yes, it was grueling at times, but RT was like a family, really.

Patrick Lee: We always said Rotten Tomatoes was a big happy family. We mostly hired friends we already knew (or referrals), and the few times we hired people outside of our circle, we were very careful to find people that we got along well with. The funny thing is … Now some of us are a family. Senh ended up marrying Binh’s cousin, so now they are cousins-in-law. And Susan ended up marrying my brother Bryan, so now she’s my sister-in-law!

An Oral History of RT, Part One: The Beginning

Box Office Guru Preview: Will Ferrell Goes for the Gold