How many '80s slasher movies can the newest installment of Ryan Murphy's horror series pay tribute to in its first episode? Read critics' first takes on AHS: 1984.

The ninth season of American Horror Story is subtitled 1984 — meaning viewers are in for a mega dose of nostalgia with their scares this year. The campy horror series goes to literal camp this year as the core cast of Ryan Murphy’s players gathered at Camp Redwood for a summer of outdoor fun (and, apparently, death).

The action begins with a flashback to a 1970 summer camp massacre by the now-incarcerated Mr. Jingles (John Carroll Lynch), then introduces the five Los Angeles youngsters who venture to the great outdoors for their new summer job. Brooke (Emma Roberts) is the “last American virgin” who decides to join her relatively new friends after being attacked in her apartment by the real-life killer eventually dubbed the Night Stalker. Montana (Billie Lourd) is a sexually charged aerobics obsessive, Ray (DeRon Horton) is the nice guy of the group, Xavier (Cody Fern) is a serious actor uninterested in soap opera gigs, and Chet (Gus Kenworthy) is an athlete recently kicked out of the Olympics. They head to the summer camp led by uber-Christian camp director Margaret (Leslie Grossman), a survivor of the aforementioned massacre, where they meet camp staffers Rita (Angelica Ross), the nurse, and Trevor (Matthew Morrison), an anatomically gifted activities director.

Cue slasher movie references galore, plus some more scares for the main cast.

Blast from the Past 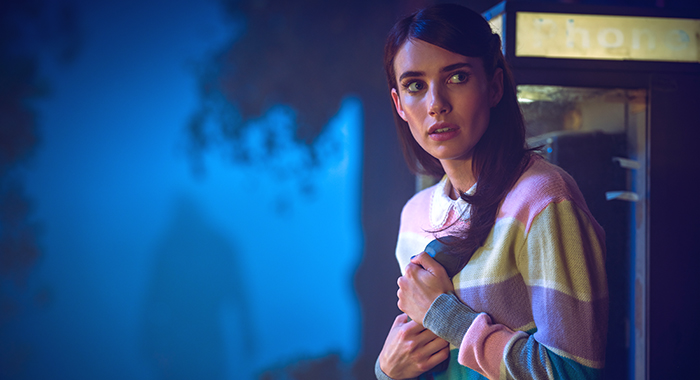 Only one episode into the season, it already looks to be a fun ride because 1984 is the first season since Freak Show to be set in the past. (Yes, Hotel had some other eras popping up, but it was mostly set in the present day.) This year seems like a real treat for campy horror, though, harkening back to not only the original Friday the 13th movies but also the fun knockoffs like Sleepaway Camp and Summer Camp Nightmare. —Andrea Reiher, Variety 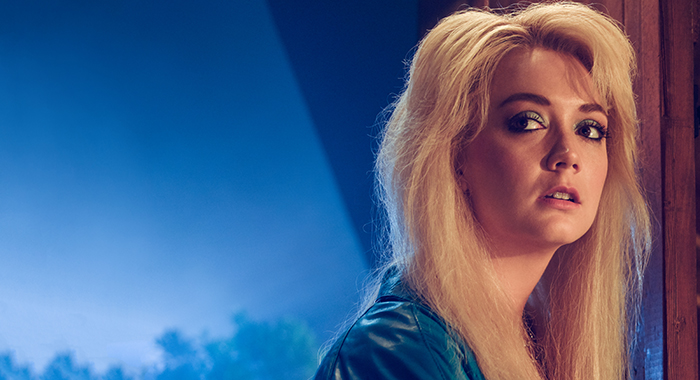 The ’80s references come so hard and fast the start of the show almost reads like a sketch sending up ’80s nostalgia, from the neon font introducing the cast to “Cruel Summer” playing within the first fifteen minutes. —Molly Horan, AV Club

It seems very possible that Ryan Murphy appropriated the writing budget for this episode and spent it all on thong leotards, shimmer stockings, and sleeveless polyester turtlenecks — because the story makes no sense, but lord, the cast looks fabulous. —Kat Rosenfield, Entertainment Weekly

If last season — Apocalypse, if you have already lost track of where we are in the series’ nine-season run — was the first time I felt like campiness and silliness overrode the core mandate to be freaky and creepy, Wednesday (September 18) night’s American Horror Story: 1984 premiere was the first time it seemed like Murphy and Falchuk were engaging in nostalgia for nostalgia’s sake. The launch was an hour-ish of the writers and frequent director Bradley Buecker saying, “You like Glow? You like Stranger Things? You like the ’80s? Remember those summer camp killer movies? Reference! Reference! Reference!” —Daniel Fienberg, The Hollywood Reporter

And Plenty of Horror References 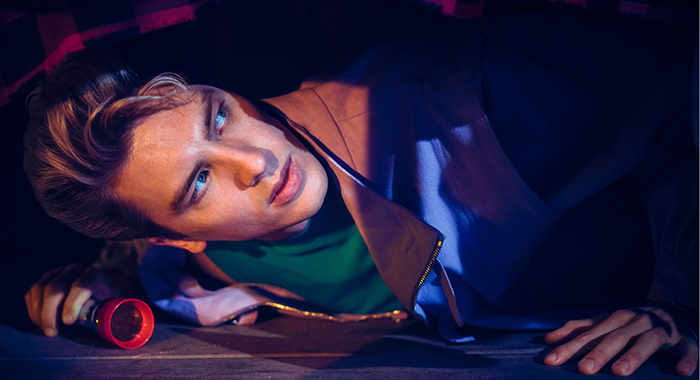 In classic horror fashion, a gas station attendant learns where they’re going and warns the group that they’re all gonna die. In more classic horror fashion, the gang run down a random hiker. He’s still alive, though he can’t remember his name. Xavier (who was driving) wants them all to agree they didn’t hit him. —David Oliver, USA Today

Friday the 13th is the main reference point here, obviously, but John Carpenter’s Halloween creeps in, in a big way, toward the end when Mr. Jingles escapes from his asylum (which almost feels like a Goonies moment). There’s even a gender-swapped Dr. Loomis-type, along with a fun cameo by The X-Files‘ Mitch Pileggi, who was killer Horace Pinker in 1989’s Shocker. —Matt Fowler, IGN 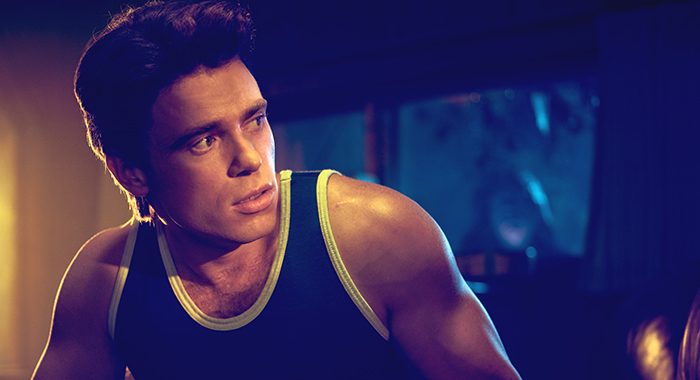 AHS: 1984’s tone is so much brighter, lighter, and stylized than previous seasons of American Horror Story (God, the opening credits this year are amazingly on point) that this almost feels like a stealth season three of Scream Queens, especially with Emma Roberts leading the pack as Brooke Thompson. Make no mistake, this is a good thing, and at least this first episode embraces that show’s gleeful murder-happy impulses. —Daniel Kurland, Bloody Disgusting 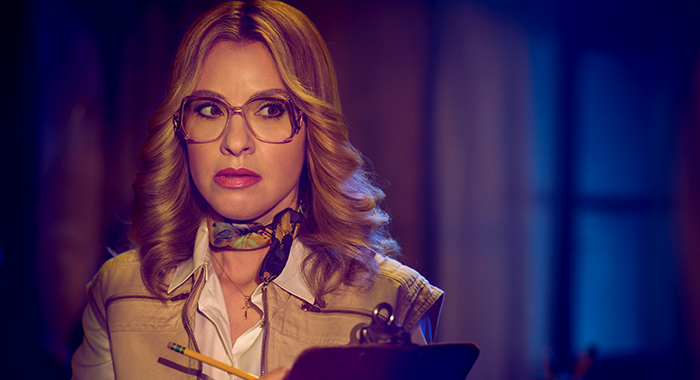 The whole thing opens with our serial killer, Mr. Jingles (John Carroll Lynch), murdering an entire cabin of teenagers — one via knife through the eye — and collecting their ears as trophies, so, uh, no, they aren’t messing around with the gore this season. —Maggie Fremont, TVGuide.com 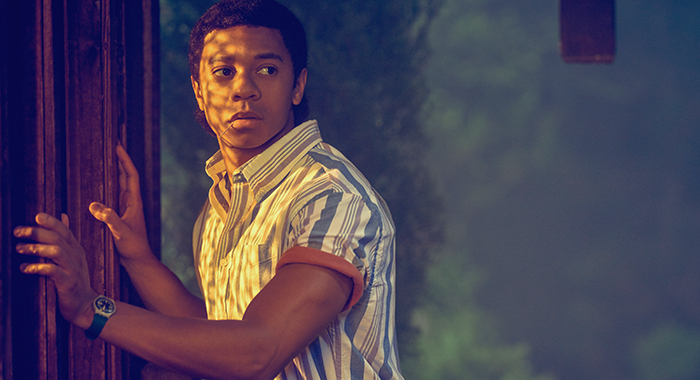 One of the big elements that makes American Horror Story interesting is that each season tends to contain some kind of major, game-changing twist. Last year in Apocalypse, for example, the show killed off most of the main cast a couple episodes in and transitioned into a crossover between Coven and Murder House. Back in Roanoke, they revealed midway through that we had been watching a reenactment of real events — a show within a show — before those real ghosts started going after the cast and crew of that meta-show. Since it seems like it would be difficult to make a straight homage to ’80s slasher movies last ten episodes, we can’t help but assume that AHS 1984 will feature some kind of similar change-up, but of course it’s hard to guess right now what it might be. But there has to be something, right? —Jennifer Maas and Phil Owen, The Wrap

Thus far, 1984 is pastiche. Like Scream without the analysis, it is obsessed with what made slashers slashers with little more to say at any given moment than, “‘Member that?” Of course, being a TV show that has to air for several weeks and take up about 10 hours of airtime in total, it can’t be as flagrant with its characters’ wellbeing, which means there’s a lot of dead-end suspense when the show manages to be suspenseful at all. It’s fun enough, though, and the VHS-inspired intro is killer —Rich Juzwiak, Jezebel

The big question as the pilot closes with the crazed killer having escaped from the asylum, running loose in the rain near a bunch of buzzed camp counselors who really, really want to get into each other’s short shorts isn’t what comes next. Anyone who has seen even a snippet of a classic horror film from the ’80s knows what comes next. It’s how what comes next fills another ten or so episodes when it usually only covers the second half of a 90-minute movie. —Molly Horan, AV Club

In many ways, the premiere’s approach feels like classic AHS—even a return to basics after the bonkers if entertaining spectacle that was AHS Apocalypse. The slasher theme moves the show away from any whiff of topicality, instead fixing its lens on a simpler time, when killers stabbed and their victims ran screaming through the woods. —Laura Bradley, Vanity Fair