Is Alias Grace the Next Handmaid's Tale? 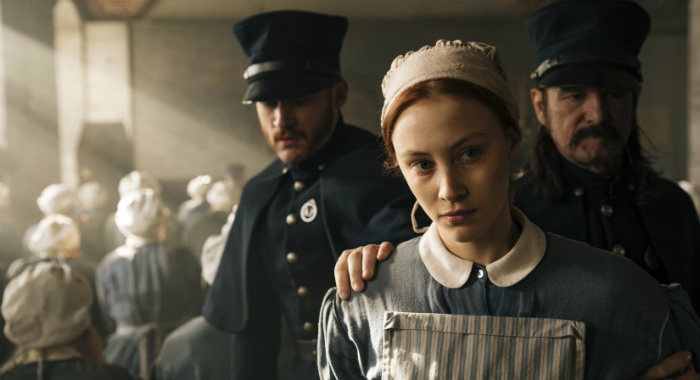 Margaret Atwood began writing novels nearly 50 years ago, but 2017 has been a banner year for the celebrated Canadian author. First came the Emmy-winning adaptation of her dystopian novel The Handmaid’s Tale on Hulu.

And now Netflix is releasing a six-part miniseries based on Atwood’s 1996 novel Alias Grace, adapted by Sarah Polley, the Oscar-nominated writer-director of Away from Her. It’s early, but the new series is off to a great start with a 100% Tomatometer score on 21 reviews as of this publication. The Handmaid’s Tale, by comparison, is Certified Fresh with a 95% Tomatometer score on 95 reviews.

Director Mary Harron, who helmed all six episodes, thinks it’s the perfect time for Atwood’s stories to reemerge in the pop culture consciousness, especially given the current political climate.

Back in 1996 when she released her first film, I Shot Andy Warhol, Harron was almost afraid to call herself a feminist in interviews.

“I would have to grit my teeth, because I knew if you said you were feminist the people would think you were shrill and dogmatic and gonna lecture people,” Harron said recently during a Netflix press event with the cast. “But I thought, I’m not gonna deny feminism. I’m gonna embrace it. … I would never deny feminism, because without feminism, I would not be making films. Feminism made it possible for women to direct films.” 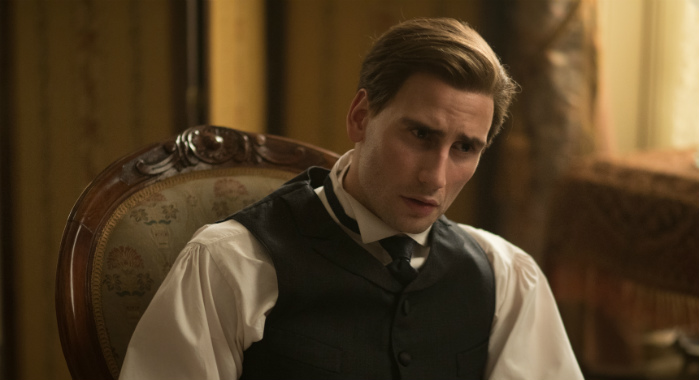 But the climate changed after the 2016 election.

“I think big debate over the position of women and women’s rights have made [labeling yourself a feminist] something that would be more embraced,” Harron said. “People were angrier, I think, and ready to embrace these kinds of stories. That said, what makes Margaret Atwood great isn’t just that she’s a fantastic storyteller, she’s a great writer.”

While The Handmaid’s Tale is about a dystopian future in which women aren’t allowed to read, write, or hold any agency of their own, and fertile women are raped monthly and forced to bear the children of their masters, Alias Grace is a very different story about a real-life Irish servant charged with double murder in 1800s Canada.

“I think that Sarah Polley said, ‘The Handmaid’s Tale is a look forward — this dystopian cautionary tale of where we could go as women,” said Sarah Gadon, who plays the accused murderer Grace Marks. “Alias Grace is very much so looking backwards at where we’ve come from as women and everything that we have been subjected to.’ Right now we are in between. We’re trying to place ourselves in these two horrible narratives and trying to grasp at how we can change that and where we can go in a way that is not so dark and not so terrible for women. So I think that the two projects really resonate in that way.” 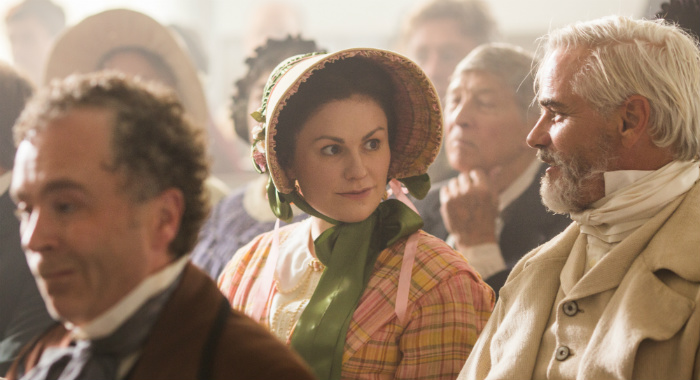 Anna Paquin portrays Nancy Montgomery, the housekeeper having an affair with the landowner she works for — both of whom Grace is accused of murdering. Paquin said she’s drawn to playing interesting people and especially enjoys being able to research characters who lived in different times, like in Alias Grace or her role in the recent remake of Roots.

“There are many strong women in many settings, in many time periods and many genres,” she said. “Those are the roles I find to be professionally interesting, so I can’t see it any other way as far as what kinds of things I would choose to do. I think it’s also really exciting, especially, with things that are based on historical events or loosely based on historical events to explore what our pioneer sisters were doing hundreds of years ago to pave the way for us modern women to have the rights and be taken seriously in the way that we are now. I think that’s always very interesting to dive into.”

Gadon met with Atwood while prepping for her role — which also involved plenty of reading, research, and dialect coaching for the Canadian actress — and the author offered some advice.

“One of the things that she told me was how important it was for me to maintain the ambiguity of whether or not she was guilty or innocent. So of course I had my own thoughts about who Grace was, and what she did, but I’ve been given strict orders from Margaret not to speak about those,” she said.

But it was hard to maintain that sense of uncertainty of her character’s guilt.

“I will say that often I would become bogged down by the question of innocence, and this idea of playing this enigmatic character, and how do you really do that? One thing that really helped ground me was the notion that Grace Marks was a real person,” Gadon says. “She was a real girl that emigrated from Northern Ireland to Canada, and she was a house maid, and she was subjected to this British colonialist society that Canada was at that time, and how that must have actually felt. Grounding it in a real person really helped me navigate all of that ambiguity and all of that density of everything that it was to be her in that time.” 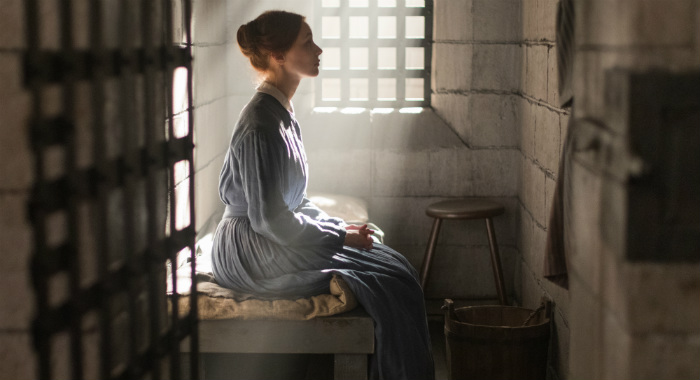 Harron also worked hard to maintain a feeling of doubt about whether Grace was a killer or not.

“I do like characters who are complicated and not always necessarily good or bad. I think Sarah Polley and I and Margaret Atwood, we all like ambiguity and we all like contradiction,” she said. “And the thing about these characters is they’re very contradictory. What this story has done is take a legendary person, a real-life murderer — or accused murderer, let’s say that — [and] today, Ryan Murphy would be doing a series about her. It would be an American true crime or something, because it would be so complicated and interesting a story. And she’s one of these great, good/bad characters.”

In the opening episode, Grace looks in the mirror and says, “They say I’m a female demon. Some say I’m an innocent victim lead astray. They say all these things about me,” Harron noted.

“It’s all the different ways in which a woman can be mythologized in our society,” she said. “People always said to me when I did my first movie, ‘Why would you make a movie about such an awful woman who shot Andy Warhol? That’s just awful.’ And it’s like, no, but she’s brilliant and tormented and a complicated story, and I find that more interesting than someone who’s just an innocent victim or just Mother Theresa or whatever.

“To me, what makes a story dramatic are the contradictions in the main character — the good and the bad,” she continued. “One thing I love about the Margaret Atwood stories is women are never just innocent victims. They can be very complicated, they can do strange and violent things.”