Adrift Gets There Eventually

Plus, Upgrade is a solid thriller, Unbreakable Kimmy Schmidt concludes on a high note, and guess Action Point's Tomatometer.

This weekend at the movies, we have a yacht rocked (Adrift, starring Shailene Woodley and Sam Claflin), a bionic (and very angry) man (Upgrade, starring Logan Marshall-Green and Betty Gabriel), and the return of Johnny Knoxville (Action Point). What are the critics saying? 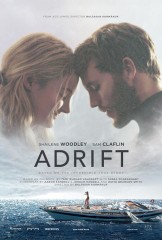 Based on the way Hollywood tends to depict ocean sailing, it’s a wonder anyone ever gets in a boat. Whether it’s Mother Nature or Billy Zane out to get you, the movies make it easy to assume you won’t be in any hurry to get back on the water if you’re lucky enough to ever return to shore. This weekend’s Adrift, starring Shailene Woodley and Sam Claflin as a pair of ill-fated sailors, has the added benefit of being based on the true story of two lovebirds who set out for San Diego from Tahiti — and ended up sailing right into a ferocious hurricane. All manner of hardships follow, with Woodley (who plays real-life adventurer Tami Oldham) shouldering the brunt of the responsibility for getting the couple back to safety after the storm; as one might expect, the end result is something of a dramatic showcase for the Big Little Lies star, and critics say she makes the most of it. While reviews describe Adrift as a viewing experience whose narrative occasionally feels uncomfortably close to its title, it’s still a beautifully shot voyage that’s ultimately well worth taking. 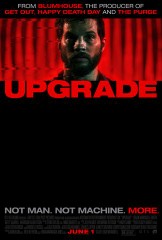 Take one part Six Million Dollar Man, add one part Death Wish revenge fantasy, and you’ve got Upgrade, starring Logan Marshall-Green as a man widowed and left for dead in a violent mugging. Approached by an inventor with an experimental cure that will not only heal his battered body, but grant him superhuman abilities, he accepts — and embarks on a quest to exact vengeance against his wife’s killers. It’s the type of setup that’s lent itself to countless low-budget genre outings, but in the hands of writer-director Leigh Whannell, this is one sci-fi thriller that actually delivers. Critics say Saw and Insidious vet Whannell is thoroughly in his element here, serving up grisly — and occasionally even inventive — action that’s leavened with enough humor to keep all the viscera from feeling too real. Whether you’re in the mood for a futuristic action movie with an old-school heart or you simply really enjoy watching wronged men beat the stuffing out of their antagonists, it looks like you can count on Upgrade living up to its name. 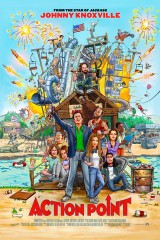 Audiences have been getting their yuks out of pratfalls since the days of Commedia dell’ arte, and it’s been a staple of cinema since Charlie Chaplin and Buster Keaton left filmgoers rolling in the aisles. All of which is to say that although Johnny Knoxville’s Jackass stunts tend to be viewed as lowbrow entertainment, it’s part of a proud tradition — and with this weekend’s Action Point, the long-suffering star takes a step further into scripted comedy with a movie about the owner of a failing, and decidedly unsafe, amusement park. It’s kind of like Jackass, in other words, which should put it right in Knoxville’s wheelhouse — and just as importantly, satisfy fans who’ll be expecting plenty of painful-looking set pieces. As for whether it’ll satisfy critics, well, that’s still an open question as of this writing. We can see it going either way, but while we wait to read those reviews, let’s play a round of Guess the Tomatometer!

Unbreakable Kimmy Schmidt ends with a final season that’s as topical as it is cheerily irreverent.