7 Lessons About Creativity We Learned on Set With Robert Rodriguez 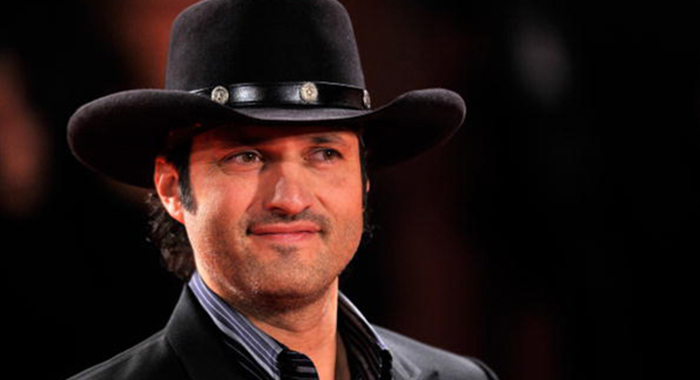 Robert Rodriguez famously made his first film, El Mariachi, for $7,000 and won the Audience Award at the 1993 Sundance Film Festival; now he runs his own heavyweight film studio and a television network which pipes into 40 million homes across the continent. So whether or not his highly-stylized, cartoonishly violent films such as Sin City, Machete, or Grindhouse are your cup of tea, you have to admit that there’s something to learn from an artist whose resourcefulness has resulted in a film and TV empire.

Visiting his Austin-based Troublemaker Studios for the second-season shoot of El Rey Network’s flagship series From Dusk Till Dawn, we saw firsthand how Rodriguez is taking risks that challenge the traditions of Hollywood, and — filmmaker or not — you can probably take a few creative tips from Texas’ top troublemaker.

DO SEE OBSTACLES AS OPPORTUNITIES TO BE CREATIVE 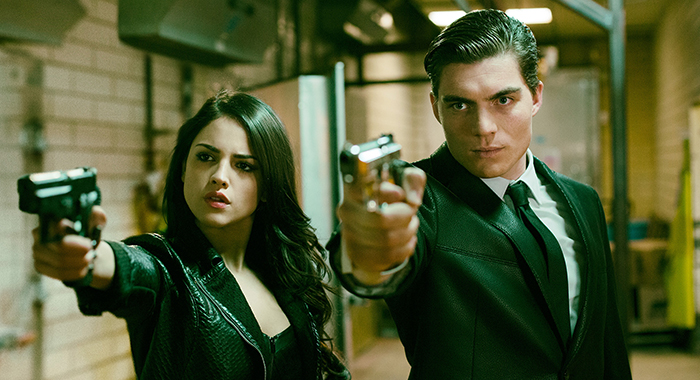 Rodriguez strongly believes that limitations are essential for creativity, and strolling around Troublemaker Studios — a one-stop shop where a single person handles multiple aspects of production — you can see this resourcefulness in action.

“You find people over the years who are really like-minded,” Rodriguez said while strumming his guitar between takes. “I do, like, six jobs. No one wants to do one job.”

“Robert is directing, playing a song, taking pictures, cooking pizzas,” said Eiza Gonzalez, who stars as Dusk’s vampire-stripper-turned-outlaw Satanico Pandemonium (originally played in the movie by Salma Hayek). “He does everything at the same time, so everyone on his team does too; they are super at multitasking.”

And in terms of efficiency, being his own distributor has allowed Rodriguez to bring the series From Dusk Till Dawn, Cutting Crew, The Director’s Chair, and Lucha Underground to television on his own terms — he can make the shows he wants while offering audiences more Latino-focused entertainment.

DON’T UNDERESTIMATE THE VALUE OF LOYALTY 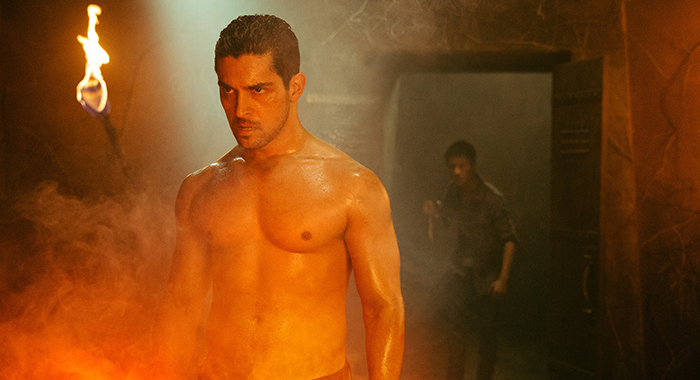 Joining the From Dusk Till Dawn cast for season two is a longtime star of Rodriguez’s films, Danny Trejo (Once Upon a Time in Mexico, Spy Kids), playing the character of The Regulator, who Trejo described as “a cross between Machete and Marcia Brady.”

“I started working with Robert when we did Desperado, which was twenty years ago,” Trejo explained. “I walked into his office, and he said, ‘You remind me of the bad guys in my high school,’ and I said, ‘I am the bad guys in your high school.'” It was from there that Rodriguez began writing roles with Trejo in mind. And it’s the kind of loyalty that Rodriguez is known for around Austin — many Troublemaker employees have worked there for 15 to 20 years, climbing the ranks to high-level studio positions.

One of the newer additions to the Rodriguez bullpen is That ’70s Show star Wilmer Valderamma, who first met with the filmmaker to discuss the part of Ranger Gonzalez in From Dusk Till Dawn, but found himself in a new role, developed specifically for him. “I’d been waiting in line for the Troublemaker membership since I was about 13 or 14 years old,” said Valderamma, who now considers Rodriguez his mentor.

DO FOCUS ON THE THINGS YOU’RE PASSIONATE ABOUT 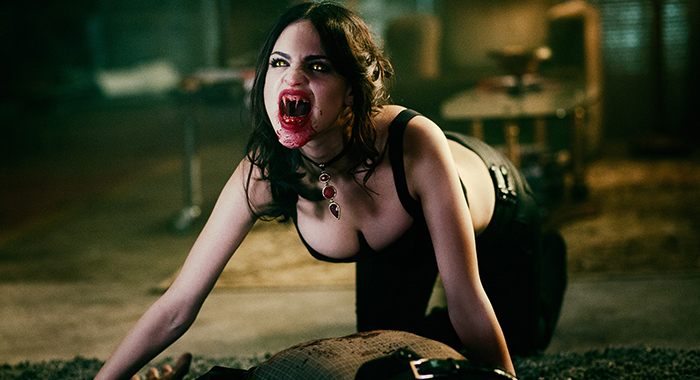 One thing you’ll notice about the content of El Rey Network is that it’s very specifically programmed. Since the channel only makes a handful of original series, the line-up is supplemented with licensed movies and TV shows that Rodriguez and his team handpick — which is why you might stumble upon Kung Fu Thursdays, Brass Knuckle Mondays, James Bond marathons, and blocks of old Miami Vice episodes.

“If somebody loves it, then I think other people will love it too,” Rodriguez shared. “I think it’s the only network where people can see it and say, ‘Obviously, the people who run this network have seen everything that actually goes on the network and are big fans of everything on it.’ So everything has that feeling of real love and attention and lifting it up.”

To give his programming strategy some context, Rodriguez compared El Rey to that friend everyone has who is always recommending cool, weird, obscure, or outrageous stuff. For him, that friend is Quentin Tarantino.

“I go to Quentin who shows me cool s— that I’ve never heard of, and I need somebody like that, or I’d never know where to begin,” Rodriguez shared. “So we do [the same thing]; it’s curated content that we’re really passionate about.”

DON’T BE AFRAID TO DELEGATE 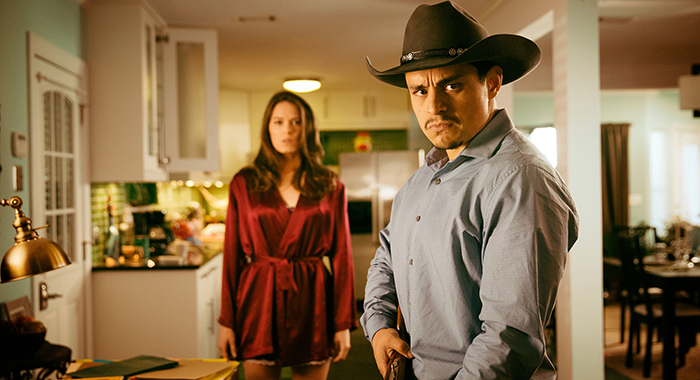 When we visited the set of From Dusk Till Dawn in June, Rodriguez was shooting the season finale; he also shot tonight’s premiere. The other eight episodes of season two were handed off to different directors.

“Part of what I’m doing with the network is train more people, so you can’t just take their [episodes],” Rodriguez explained. “We’re getting more people in here to direct and they do a great job.”

One of the directors is head writer Carlos Coto (Heroes, Nakita), who will be expanding the From Dusk Till Dawn universe in season two. “I can do whatever mythology I want and no one’s going to tap me on the shoulder — least of all Robert — and tell me not to do it,” Coto said. “We can break rules of how we make it. It’s been completely liberating on every level.”

“This season, we get to take the characters to whole new places and, at the same time, still live within the universe of Robert Rodriguez,” added co-executive producer Diego Guiterrez. “We get the mythology, the coolness, and the combination of humor and gore that are a staple in Robert’s world.”

DO RELAX; YOU CAN STILL GET PLENTY OF WORK DONE 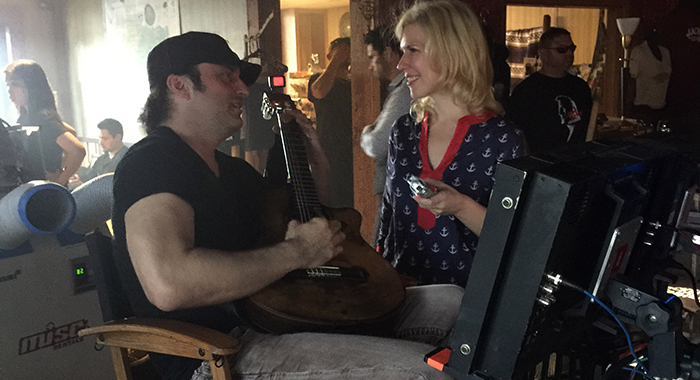 From Dusk Till Dawn‘s Zane Holtz and D.J. Cotrona, who star as the Gecko brothers (originally played by Quentin Tarantino and George Clooney in the movie), are having the time of their lives on this job, thanks in large part to the laid-back nature of the set.

“Honestly, any time you get near a project with more prestige or cult status or visibility, it seems that everything around it gets constrained,” said Cotrona, who played Flint in the 2013 film G.I. Joe: Retaliation. “You get less creative freedom and less choice because the property’s so beloved. I’ve had the polar opposite experience here with Robert. This is an amazing franchise. It’s so beloved, and this character [Seth Gecko] is so iconic, but after we got cast, he gave us a lot of creative control over what we want to do with the characters.”

Co-star Jesse Garcia agreed that the chilled-out feel of Troublemaker makes for an ideal creative environment. “There are definitely rules here, but they don’t apply the same way that they would at other networks,” he said. “It’s totally good vibes. Everyone gets along. There’s no bad blood here.”

Rodriguez also encourages actors to keep their creativity flowing by offering an art studio for them to use during the downtime. Joseph Gordon-Levitt, Bruce Willis, and Rosario Dawson have all painted there, and some of the artwork to come out of Troublemaker Studios now hangs in an art museum in downtown Austin.

DON’T WORRY ABOUT FAILURE; IT’S THE KEY TO SUCCESS 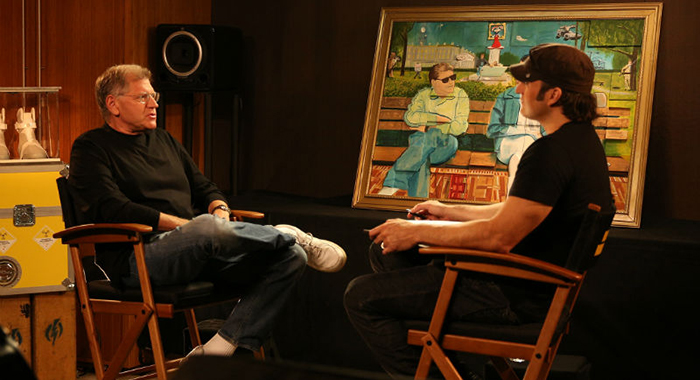 On his show The Director’s Chair, Rodriguez interviews fellow filmmakers such as Quentin Tarantino, Michael Mann, John Carpenter, and Sylvester Stallone about the artistic process, talking about the iconic movies and the supposed failures that contributed to their storied careers.

“Without Mimic, there’d be no Pan’s Labyrinth,” Rodriguez said, reflecting on the episode with filmmaker Guillermo del Toro. “Failures are really what take you to the next place.”

Rodriguez also spoke about Robert Zemeckis (Back to the Future, Cast Away) and the revelation that he had struggled so much with his work. “You always think Robert Zemeckis has had a charmed career, and as we’re going through it, it’s just one disaster after another. He does Romancing the Stone and they fire him preemptively from Cocoon because they think it’s the worst thing they’ve ever seen. Of course, it goes on to be the biggest hit.”

Failure was also a theme in Rodriguez’s interview with Francis Ford Coppola, who couldn’t find financing for Apocalypse Now, even after giving the world The Godfather, The Conversation, and The Godfather, Part II. Rodriguez fondly recalled a quote from Coppola’s episode that he found especially inspiring. “The things they fire you for when you are young,” Coppola told him, “are the same things that they give you lifetime achievement awards for when you are old.” 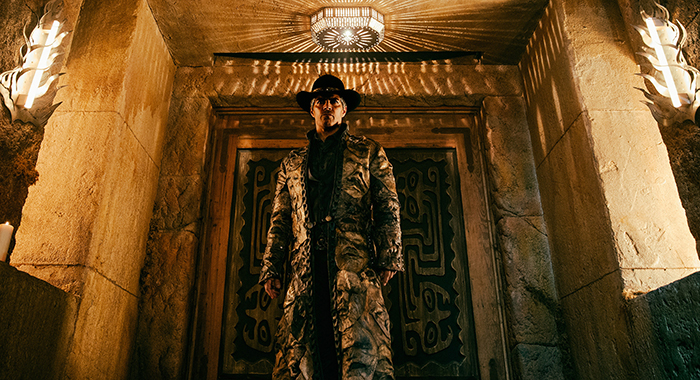 Rodriguez acknowledges that his approach to El Rey Network, and to filmmaking in general, is outside the Hollywood standard — but he’s always seen that as an advantage. An early adopter to digital filmmaking, Rodriguez recognized how efficient the new technology was in 2000, when most filmmakers were still shooting on film.

“You see what you’re getting right away,” Rodriguez explained. “You can light it easier, you can show the actor how it looks, and you know when you’ve got the right take.” In other words, it just made more sense.

“Part of it is that we’re far out of Hollywood, so we don’t really know how other people do it,” Rodriguez admitted. “We kind of got to rethink everything and go, ‘Wait, why do they do it that way? That doesn’t really make a lot of sense. Let’s do it this way.’ More people show up to shoot here, and they’re like, ‘Wow. This is the quietest, fastest set I’ve ever been on.’ And I don’t know what other sets are like, so you get to build your own world up, and your own methodology, and everyone does multiple jobs, and it’s just a lot of fun.”

Another aspect of Hollywood that doesn’t fit with Rodriguez’s creative worldview is the closed nature of the entertainment industry — and it’s something that he’s hoping to change with El Rey.

“I tell people, ‘Mi network es su network.’ Because I have a network, that means that you have a network. No one can ever break into the industry, so I wanted to create a place where people felt like, ‘Wow, I have these stories but no one puts this kind of stuff out. This is me, this is really who I am and my background.'”

From Dusk Till Dawn season two premieres tonight on El Rey Network at 10 p.m. See an interview with the cast here.