Watts, Jennifer Coolidge, Mia Farrow, Margo Martindale, and Noma Dumezweni share some background on the creepy Netflix thriller that is inspired by a true story.

Just weeks after Ryan Murphy unleashed Dahmer – Monster: The Jeffrey Dahmer Story on Netflix, he’s back with another creepy show inspired by real life. In The Watcher, Nora (Naomi Watts) and Dean Brannock (Bobby Cannavale) buy a lavish lakeside house in New Jersey and move in their family, but they soon start getting letters from someone who claims to have watched the house for decades, and proves he’s been watching them by offering intimate details.

The real-world Broaddus family experienced the terror captured in New York magazine article “The Watcher” by Reeves Wiedeman, and the real-world watcher was never caught. The show presents Murphy and Ian Brennan’s idea of what might have happened. The Watcher also stars Jennifer Coolidge, Margo Martindale, Noma Dumezweni, and Mia Farrow, who spoke with Rotten Tomatoes along with Watts ahead of the show’s premiere. Here are six things we learned about The Watcher from the cast. 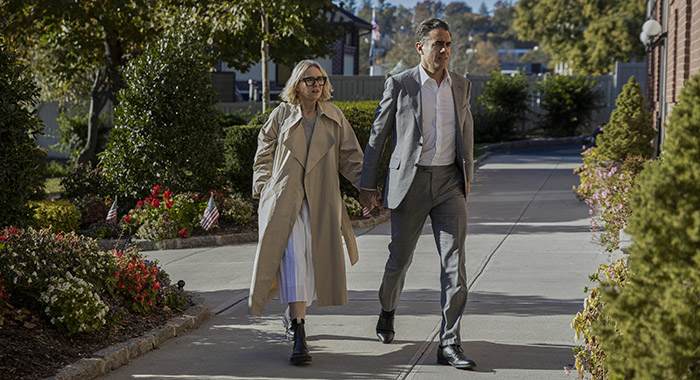 Watts and Cannavale are not playing Maria and Derek Broaddus, but fictionalized characters in a situation inspired by the real events.

“This story is based on a true story, but we trusted the scripts we were handed,” Watts said. “Really the character Nora was there on the page and creative license was taken for sure.”

Dean invests all the family’s savings in the house, so leaving is not an option. Even when the letters get more specific and unsettling, the family is in too deep.

“I think they’ve worked to get to this place for a long time,” Watts said. “This has been something they’ve dreamed about and talked about, the confinement of the city and wanting to be out in nature, leafy green streets with big bedrooms. That’s something that they’ve wanted and so to finally get that opportunity and have it in your clutches is everything that they hoped for. So this letter, while concerning, we’re not going to let that get in the way of the dream that has been fought for for so long.”

2. THE WATCHER IS A FIRST FOR JENNIFER COOLIDGE 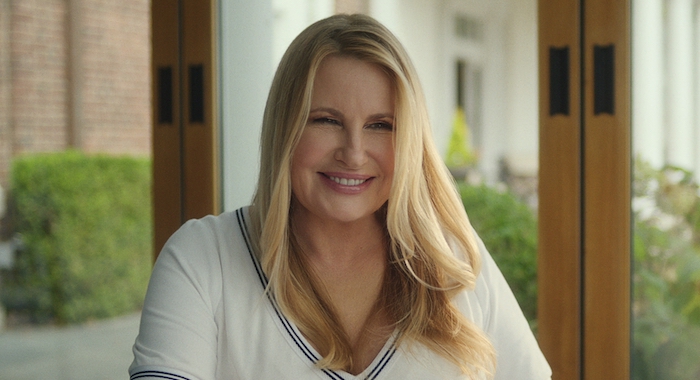 Coolidge plays Karen Calhoun, the realtor who showed Nora and Dean the house and remains a family friend of Nora’s. Having played outrageous characters from American Pie and Best in Show to The White Lotus, Coolidge said Karen was a dream role.

“No one’s ever let me play someone like this,” Coolidge said. “One of those very sort of excited, friendly people in a neighborhood. I’m too shy to be that person but I’ve always wanted to be one, even if it was on film. I got my wish somehow. I don’t know how. But I’m very upbeat and full of energy. I love my job.”

Watts added that Nora valued having someone like Karen on her side through this ordeal.

“Nora gets to have a friend in this new neighborhood,” Watts said.

3. THE CAST DIDN’T KNOW WHO THE WATCHER WAS 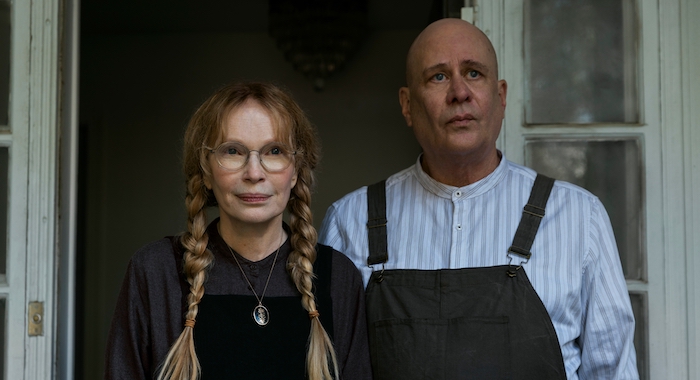 Since they never caught the watcher, the cast had no leads either. Martindale and Farrow play neighbors who each act suspicious in their own ways. Farrow and Martindale said they suspected each other, and their co-stars.

“We jumped around with who we thought was the watcher,” Martindale said. “It made it more fun though. It kept us on the edge of our seats.”

4. THE BRANNOCK FAMILY CALLS FOR BACKUP IN EPISODE 2 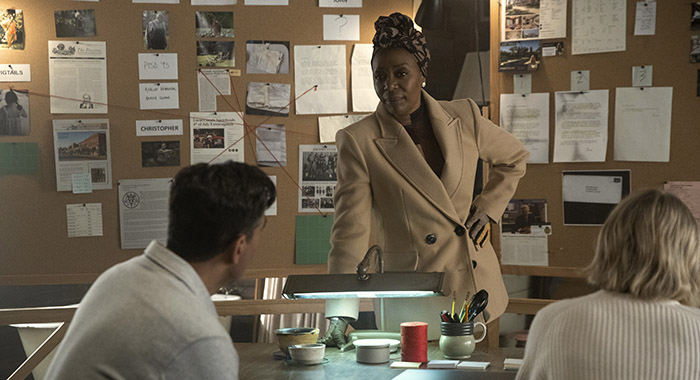 Dean goes to the police with the first letter and some other evidence, but they can’t help. Noma Dumezweni appears in episode two as the private detective Theodora.

“It kicks in more in episode 3 but her arrival is in episode 2,” Dumezwani said. “What I love about Theodora is that she loves what she does. But it’s almost like an urgency and need to sort out things in the world. Her way of living is finding out stories about people and how to solve those stories.”

5. THE HOUSE WAS REALLY CREEPY 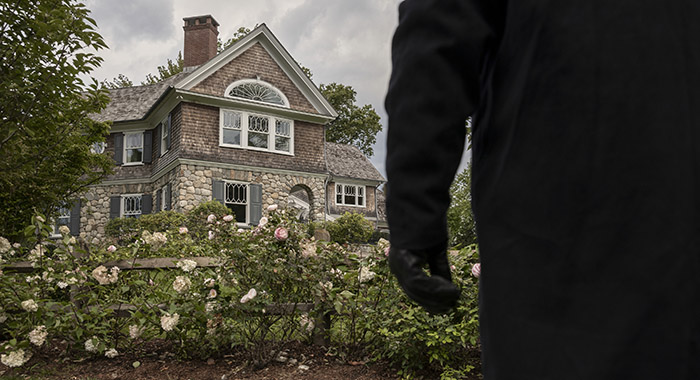 Watts said she filmed some of The Watcher in a real house on location.

“And then of course there were stages as well where we built rooms,” Watts said.

Coolidge said both the real house and the sets were equally creepy.

“The replica that was built was so identical to the actual house,” Coolidge said. “I thought that was kind of creepy. I would forget where I was. I thought that just added to how something maybe metaphysical was around or something because it was just the same sort of eerie thing. It’s amazing they can create an eerie feeling just out of building something that copies a house. It was very bizarre how they did that but I was creeped out in both places. Even though I knew it was a set, it was so creepy.”

6. MO CALMS DOWN BEFORE GETTING HEATED AGAIN 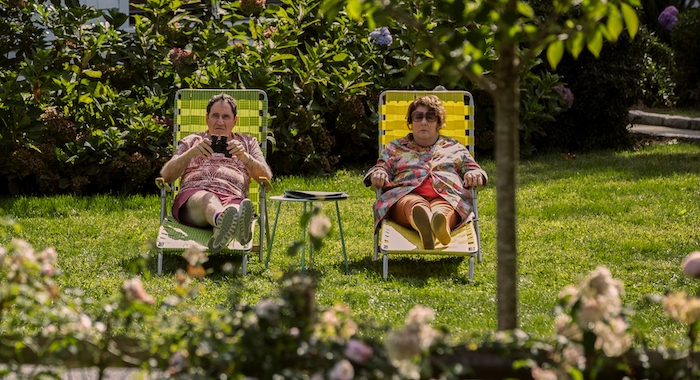 Next-door neighbor Mo gets heated with Dean in the very first episode, arguing over her tresspassing to harvest arugula overgrowing the fence that divides their property.

“Arugula starts at a high pitch,” Martindale said. “However, I do calm down and then come back again.” 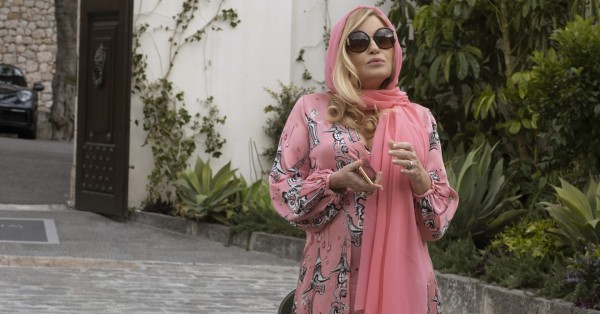