A busy Friday out of 2022 Comic-Con International: San Diego saw high-profile presentations from Amazon's Lord of the Rings prequel series, Marvel's I Am Groot and X-Men series, and the continuing adventures of The Walking Dead, among others.

Friday at Comic-Con International: San Diego 2022 revolved around One Panel to Rule Them All, but beyond the public’s first taste of The Lord of the Rings: The Rings Of Power, the day also saw Marvel Studios’ first animation-only panel, the return of The Walking Dead universe to Hall H, a look at Amazon’s upcoming Paper Girls – itself inspired by the comic book of the same name – and more. As any Friday at Comic-Con, it’s a lot of information to cover and excitement to experience, so let’s take a look at some of the latest from San Diego.

In a surprise move — at least for those in attendance – noted Middle-earth fan Stephen Colbert hosted a 9o-minute introduction to Amazon’s The Lord of the Rings: The Rings of Power for a crowd of eager fans. Alongside showrunners JD Payne and Patrick McKay and executive producer Lindsey Weber, he also revealed the latest teaser (see above) for the series. Seemingly centering on Galadriel (Morfydd Clark) and her struggle against the Enemy still lurking in the shadows, it also spoke to the grandeur Second Age Middle-earth will provide to viewers.

But before the new preview, Payne and McKay took the opportunity to prove their credentials as Tolkien fans. Payne recited a poem entirely in an Elvish language while McKay admitted he first read The Hobbit in fifth grade, “reading through” to The Lord of the Rings, The Silmarillion, and the incomplete tales Tolkien’s son published after the author’s death in the late 1970s. “Tolkien speaks the language of the soul,” he added.

Showing their pedigree seemed essential to them, as McKay also admitted “We’ve never been on [this] stage before and we’re scared s–tless.” But their worries proved unfounded with the audience quite receptive to the pair’s rapport with Colbert and their own enthusiasm for the show. Indeed, they pitched the Second Age of Middle-earth setting and, as McKay put it, “Amazon was crazy enough to let us.”

“We felt the Second Age is so awesome,” Payne said. “It’s the rise and fall of Tolkien’s Atlantis. The rise of Sauron. That story struck us as one that could live up to the epic canvas.” 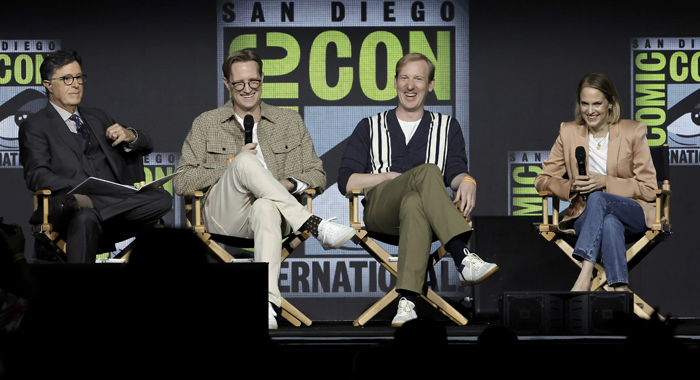 Colbert asked what their favorite canonical moment from the era might be. McKay said his is when “Sauron has forged the One Ring in Orodruin, puts it on his finger, and evokes the ring poem… and the Elves instantly perceive they’ve been had.” Payne added his is the whole sweep of Númenor’s downfall. The destruction of an island populated by advanced Men is one of the great tragedies in the author’s legendarium and resonates down to even Aragorn’s coronation in The Return of the King novel and film.

But both of those events are seemingly in the series’ future, as both showrunners stated the mission statement of the first season is, as McKay put it, “reintroducing this world and the return of evil.”

While the return of that evil remains somewhat secretive – although we’re convinced that was Sauron blowing that leaf into the darkness in the new trailer – the world the show will establish is populated with Elves, Men, Harfoots, Dwarves, and Orcs of nearly every stripe and size. To represent them, 21 members of the series cast appeared on stage to answer Colbert’s questions. Some, like asking Ismael Cruz Córdova if his Silvan Elf was also Avari (a group of Elves who remained in Middle-earth after being summoned to Valinor), proved to be a little too much of a deep-dive. For Charles Edwards, who plays Elf craftsmen Celebrimbor, a question about his character’s culpability in the creation of the Rings offered a chance for some insight.

“We meet him in a place of creative flux,” Edwards said. “He wants to recreate Valinor in Middle-earth. He’s restless. What he sees as a creative invalidity makes him susceptible to predators.”

That predator could take the form of Daniel Weyman’s Stranger. The character, despite appearing in a new character poster during the panel, is still wrapped in mystery, and the actor did everything he could to evade Colbert’s attempts to learn the Stranger’s true identity. A clip played shortly afterward focused on The Stranger as he seemingly falls to Earth and meets Nori Brandyfoot (Markella Kavenagh). Initially, his eyes seem to be all black, but once he touches her arm, they take on a more human appearance. That sort of shape-shifting is indicative of Sauron, but also others in his order of being, which include the Wizards who later come to Middle-earth and, oddly enough, the Balrogs – one of which is also glimpsed in the new trailer. 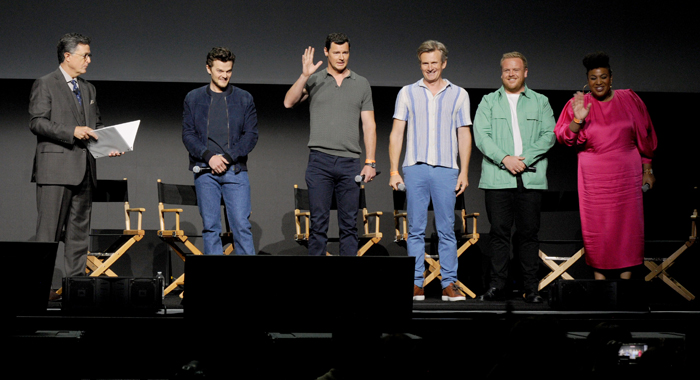 But one thing the creators were more willing to share was a look at the Dwarves in their time of ascendance. Represented on stage by the boisterous pair of Owain Arthur (Prince Durin IV) and Sophia Nomvete (Disa), the two impressed on the audience that their world is filled with laughter and song. Indeed, a clip revealing a friendship of sorts between Arthur’s Durin IV and Rob Aramayo’s Elrond also illustrated just how much life and strength one can find in a Dwarven kingdom.

Nomvete added, “Disa is the first female dwarf we’ve ever seen in the works of Tolkien and I have the honor to host that revolutionary moment. She’s a mother, she’s a wife to Durin, she’s a force of nature.”

Of course, with 20 cast members to get through, the panel went a little long. Nevertheless, Colbert opened the floor to questions. During that part of the session, one fan asked about an alleged controversy regarding Galadriel’s armor. The fan and Colbert argued whether or not the design on her chestplate reflected the House of Fëanor or the House of Finwë – two Elves of the Elder Days she both knew and had strong opinions about. After some good-natured back-and-forth, Weber offered the room an exclusive: “It isn’t actually her armor; it’s a gift from someone else.”

It seems everyone involved in The Rings of Power did their homework. The show debuts September 2nd.

Marvel Studios’ first ever animation-only panel unveiled some its upcoming plans and treated the audience to a special screening of an I Am Groot short called “Groot Takes a Bath.” As you might expect, the short centers on Baby Groot’s bathtime adventures. The series, debuting on August 10, dedicates its time to the character’s “formative years.” Baby Groot gets into all sorts of mischief across the five episodes, some of which can be glimpsed in the trailer, also screened at the panel. Vin Diesel returns once again to voice the character, and Bradley Cooper will make at least one appearance as Rocket. According to writer/director/executive producer Kirsten Lepore, part of the plan was to explore normal human child development through the prism of Groot. “It’s a lot of fun to drop Groot into any scenario,” she said, adding that a second batch of shorts is also on the way.

We also learned that What If…? will return for a third season. Yes, the second has yet to stream on Disney+, but with the lead times required for animation, the announcement makes sense. Staying true to its premise, The Watcher (Jeffrey Wright) will once again peer into the Multiverse to see what might happen if key moments in the Marvel Cinematic Universe had gone differently. That could lead anywhere, but as we know from executive producer Bryan Andrews and head writer AC Bradley, you can expect to see Captain Carter (Hayley Atwell) again. Meanwhile, as those in Ballroom 20 can attest, other season 2 episodes will feature Hela, Shang-Chi, and Agent Jimmy Woo. Additionally, one episode will feature the setting of Neil Gaiman’s 1602 miniseries – which is to say it will take place in 1602. What If…? returns in early 2023. 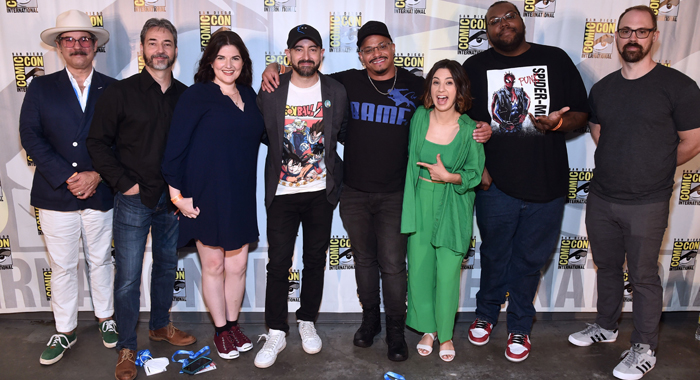 Andrews also teased the upcoming Marvel Zombies series. Picking back up in the zombie reality glimpsed in the season 1 What If…? episode of the same name, a new generation of heroes, including Yelena Belova, Kate Bishop, Red Guardian, Jimmy Woo, Death Dealer, Shang-Chi, and Kamala Khan, rise to face the undead. Unfortunately for them, the horde includes the zombified corpses of Hawkeye, Captain America, Captain Marvel, Ghost, Wanda Maximoff, and Okoye, among others. “I can’t wait to see all of this cosplayed,” Andrews said. The series is not yet on the release calendar.

And although Marvel Studios’ head of streaming, television, and animation Brad Winderbaum and executive producer/head writer Beau DeMayo offered many details about X-Men ’97, only one thing matters: the original theme song will be used. As a revival of the 1990s FOX X-Men animated series, it sees the iconic 1990s team facing new challenges, and even new teammates like Roberto De Costa (Sunspot) and a new leader. Nevertheless, the spirit and ethos of the original remains firmly in DeMayo’s mind. Also, a second season is already in the works. The program will premiere in 2023.

Lastly, Executive producer and head writer Jeff Trammel revealed a few more details about Spider-Man: Freshman Year. The series will focus on the origin of Peter Parker via an animation style that also celebrates the character’s 1960s appeal. Head of visual development Ryan Meinerding unveiled the new Spider-Man suit designed for the series – although it might be more accurately described as a “prototype” considering this is Peter’s first take on the concept – and a classic red-and-blue suit will also appear. Other tidbits the audience learned: panel moderator Paul F. Tompkins will voice Bentley Wittman, Runaways’ Nico Minoru will turn out to be Peter’s best friend at the time, Amadeus Cho lives nearby, Harry and Norman Osborn exist somehow, and Charlie Cox will lend his voice to an animated Daredevil. Also, a second season is already in development, and it’s called, naturally enough, Spider-Man: Sophomore Year. Freshman Year is set to debut in 2024.

The Walking Dead to resurrect Rick and Michonne for New Series

During the final panel for AMC’s The Walking Dead, Andrew Lincoln and Danai Gurira made the surprise announcement that their fan-favorite characters, Rick Grimes and Michonne, will reunite in a new spinoff series, which will continue to expand the growing Walking Dead universe and join the other previously announced spin-offs focused on Daryl, Maggie, and Negan.

Scott M. Gimple, who holds the title as Chief Content Officer of The Walking Dead universe, will serve as the showrunner on the program, which is set to kick off with six episodes in 2023. Lincoln and Gurira, who have been actively involved in story and character development on the project, will also serve as executive producers. 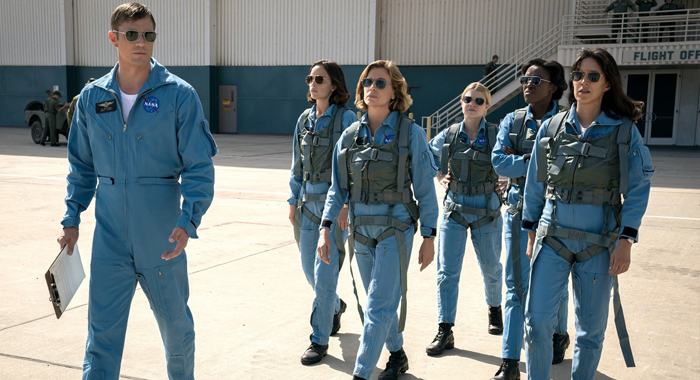 • Nickelodeon and Paramount+ introduced the official voice cast of their upcoming Transformers: EarthSpark animated series during Friday’s panel. Danny Pudi is Bumblebee, Alan Tudyk is Optimus Prime, Rory McCann is Megatron, and Diedrich Bader is Mandroid. Rounding out the cast are Sydney Mikayla as Robby Malto, Zion Broadnax as Morgan ‘Mo’ Malto, Benny Latham as Dot Malto, Jon Jon Briones as Alex Malto, Kathreen Khavari as Twitch Malto, Zeno Robinson as Thrash Malto, and Cissy Jones as Elita-1. The 26-episode series follows the first Transformers robots to be born on Earth and explores their lives as they learn what it means to be part of a human family.

• Avatar Studios announced the untitled Avatar: The Last Airbender animated film will, in fact, focus on Aang — the protagonist of the original animated series. The film, in development from Nickelodeon Animation and Paramount Animation, will be directed by Last Airbender and The Legend of Korra veteran Lauren Montgomery with series creators Bryan Konietzko & Michael DiMartino producing alongside Eric Coleman. It is expected to be the first of three films.