The cast and filmmakers behind the upcoming Dungeons & Dragons: Honor Among Thieves debuted a first trailer, while Adam Scott, Ben Stiller, and the Severance cast answered surprisingly thoughtful fan questions.

From Dungeons & Dragons’ next charisma check at movie stardom to the cast of Severance showing their “innies,” the first day back at Comic-Con International: San Diego – in person anyway – proved as hectic, exciting, and diverse as we remember it. And while fans filled the convention floor in search of prized exclusives and free goodies, plenty occurred in the programing rooms to sate those more inclined to learn about movies and television. In fact, here is a sample of some of the things that transpired on Day One.

Although Dungeons & Dragons: Honor Among Thieves star Chris Pine admitted he did not discover the popular tabletop RPG upon which the film is based until he was 42, he also told the assembled Hall H crowd that he wants to “spread the gospel of D&D” having now played the game with his entire family. The movie stars Pine, Michelle Rodriguez, Regé-Jean Page, and Sophia Lillis as a band of thieves who, according to the trailer, helped steal something for the wrong people. Now, they’re set on a campaign to find the right artifacts to stop whatever terror they unleashed. Hugh Grant also stars as an ally (?) of the party.

When moderator Karl Jacobs suggested the veteran actor was a life-long fan of the game, Rodriguez laughed and said, “I think he confused it with S&M.”

The three stars, alongside Page, Lillis, writer-directors Jonathan Goldstein and John Francis Daley, and producer Jeremy Latcham, offered the Comic-Con faithful a first look at the long-awaited big budget take on the gaming juggernaut. And while character names briefly flashed on the screen and a few actors revealed the character’s classes – Rodriguez plays a Barbarian while Page plays a Paladin – the big takeaway was the film’s tone.

“There’s a Spielbergian energy,” Pine revealed. “It just feels light and buoyant, and your job is to just keep the music and energy in the scene alive. You’re not trying to fix the world’s woes with great sadness. It has a popping energy to it and I think we all glommed onto it.”

Grant added, “I found the script incredible funny. I hate all scripts and this really made me laugh. It had a Monty Python vibe to it. And quite a juicy role for me.” After a dramatic pause, he also quipped, “I didn’t like the directors very much.” 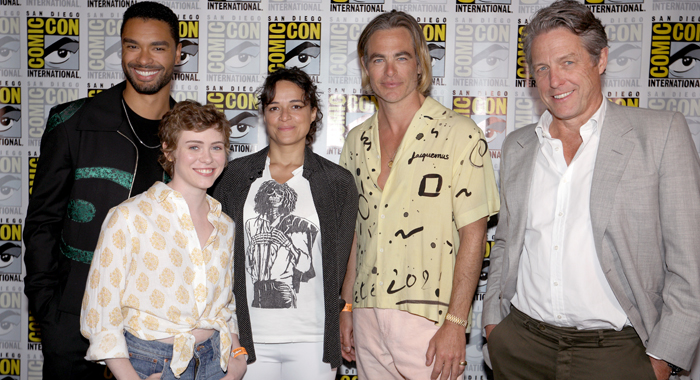 Daley, who revealed he first played the game while working as an actor on Freaks & Geeks, said the mission was to recreate as much of the feel of a D&D campaign as possible. “The sense of family, the struggles against the odds, and that moment when even the DM doesn’t know what’s going on,” he explained. “And that unique sense of humor that sets us apart in the fantasy space.”

Indeed, the humor was on display in the two clips screened during the session. The first saw the company waking the dead to ascertain to location of the Helmet of Destruction. Page’s Paladin knows the spell, but it will only allow the dead to answer five questions – a limitation Pine’s Bard needs a little too long to understand. But the jokes based upon the spell change out and build to something quite funny. The second clip focused on a maze arena the party must negotiate despite being filled with D&D creatures like a gelatinous cube, a displacer beast, and a mimic. The scene also featured a special cameo from another party dressed like the cast of the 1980s Dungeons & Dragons Saturday morning cartoon.

“We have dozens of monsters and creatures and dozens and dozens of spells that are true to the lore,” Daley said, crediting D&D‘s current curators, Wizards of the Coast, with aiding them in finding some more obscure elements to include and a few special Easter eggs for the hardcore players to find. He also teased some now-famous villains like the Beyonder, the Mind Flayer, and Vecna may also make an appearance.

The pair also confirmed at least one cameo from a “well-known, well-liked D&D player” will occur. They also thanked podcasts like Critical Role, Dimension 20, and Adventure Zone for helping to make D&D a more inviting experience. Lillis also credited those shows for getting her into D&D when she was in high school. She was so dedicated to the game, in fact, that when she transferred to a new school she would “take a 20-minute transit to go back [to my old school] and play.”

Page admitted he was always “D&D adjacent,” explaining he “always enjoyed computer games because they did the math for me; I played Chrono Trigger and Diablo.” Nevertheless, he finds role-playing games “super-inspiring” – a sensation Pine felt was at the center of why D&D finds new players all the time.

“If there’s one game that should be played in every high school, it should be D&D,” the actor said. “You can get the bully and the jock together – I can only speak in John Hughes terms – and in 20 minutes, everybody will forget where they came from and just play and have a laugh.”

And based on the moments of Honor Among Thieves glimpsed at Comic-Con, it appears D&D will finally have a film worthy of the laugh Pine describes. 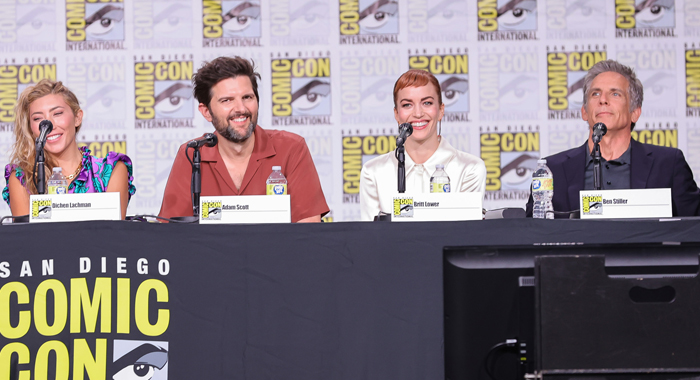 As moderator Patton Oswalt noted in the opening moments of a panel dedicated to AppleTV+’s Severance, the presentation would mark Ben Stiller’s first appearance at Comic-Con. Besides Stiller — who serves as an executive producer and director on the show – Severance creator Dan Erickson was also celebrating his debut at the convention alongside cast members Britt Lower (Helly on the show), and Jen Tullock (Devon). But convention veterans Adam Scott (Mark), Dichen Lachman (Ms. Casey), and Tramell Tillman (Milchick) were also on hand to help them with first-time jitters.

Of course, any worries in that regard were ill-founded, as the Ballroom 20 crowd proved to be filled with appreciative fans ready with questions Oswalt found surprisingly thoughtful. In fact, after Erickson revealed the show is loosely based on a string of corporate jobs that made him wish he could be unconscious for the 8-hour workday, a fan asked for a longer list of influences. Wanting to avoid too many direct inspirations in terms of theater or literature, he cited “a lot of late ’90s films that were about questioning your reality. Stuff like The Matrix and The Truman Show and Dark City. Even Office Space — that was about breaking out of a reality you were trapped in.” He also mentioned things like Lumon’s nine core principles and some of the other absurdities featured in the show have their origins in those jobs he took when he first moved to Los Angeles.

But one of the show’s key absurd elements may not be as wacky as viewers might think. Stiller mentioned a science advisor on the show who explained to them that the severance tech is real… in a way, at least. “There’s some version of this technology happening [right now],” Stiller said. “He showed us.” What makes it a more fantastic idea within the show is the notion that a person’s work life and home life can be divided by a simple chip activated during an elevator ride.

“[It’s] the only thing I wanted different [from our world],” Erickson noted. “So we could explore how it would change the world. I’ve always loved sci-fi that gets into the social aspect. That’s something I’m excited about, building out the world and what the different ramifications [of being severed] would be.” 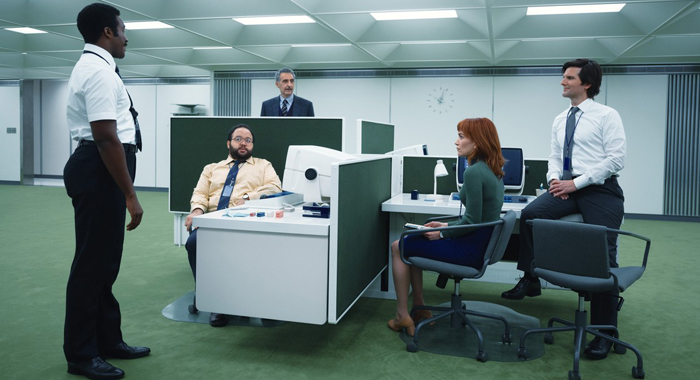 That statement inspired another fan question from a veteran who wondered if, perhaps, the show could examine the use of the severance tech in relation to PTSD in subsequent seasons. “We’ve always talked about severance as a sort of stand-in for disconnecting from pain and trauma, so I think using that to explore something like PTSD makes a lot of sense,” Erickson said. “I don’t want to go into specifics, but I think the story lends itself to that examination.”

Stiller added it could potentially already be in play as, early on, the actors had to determine how much of the character’s outside lives inform their “innie” personas at Lumon “even if they’re not aware of it.”

According to Scott, that had to be worked out quickly, as the first season was shot, essentially, all at once with scenes from, say, episodes 2 and 6 filming simultaneously. “It eventually became important to us that [Mark] feel like the same guy, but different halves, almost,” he explained. “One has forty-odd years of life experience; the other is two-and-a-half years old.”

Erickson also revealed that in his original script, it was Mark who woke up on the conference table instead of Helly, but it eventually changed. This inspired one more fan question from a woman who asked, “Dan, Ben, what is it you’re saying about the difference between men and women? There is a right answer.”

“It wasn’t a completely intentional thing to have a woman upset the balance, but once we had it… Once you introduce a diversity to an environment, it does change things,” Erickson responded. “It works so well that we leaned into it.”

Lower added, “She has this unapologetic rebellion in her and you want to know who she is. I think it’s a really relatable human experience regardless of her gender.”

Since Erickson is still working on the early development of season 2’s scripts, the fans were treated to a season 1 blooper reel which, of course, went over well. Or, at the very least, it proved Comic-Con attendees are very much Severance‘s target audience.