In space — with terrifying aliens — at least they still have each other, right? 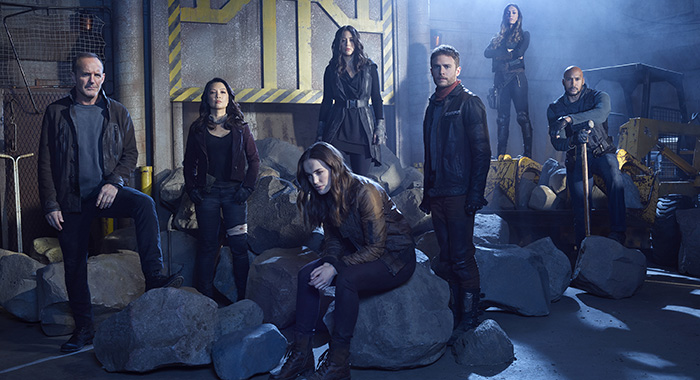 Marvel fans have waited all summer to find out what Marvel’s Agents of S.H.I.E.L.D. is doing in space. It wasn’t a dream or a Framework simulation. The series’ characters are really in space for season 5, which will also see the show reach its 100th episode.

1. THEY’RE IN SPACE BECAUSE THE MOVIES ARE

There’s no specific reference to Guardians of the Galaxy or Thor: Ragnarok, but those movies are the reason season 5 is in space. If Avengers characters are going into space, so are the Agents of S.H.I.E.L.D.

“We try to follow in the wake of the films a little bit as they plot new territory in the MCU,” Whedon said. “Last year, that was magic with Doctor Strange. We felt like Ghost Rider all of a sudden fit into our show. This is us expanding out even further into the world of space, which they very much are living in now in the features.”

2. THE AGENTS ARE ONE BIG FAMILY AGAIN 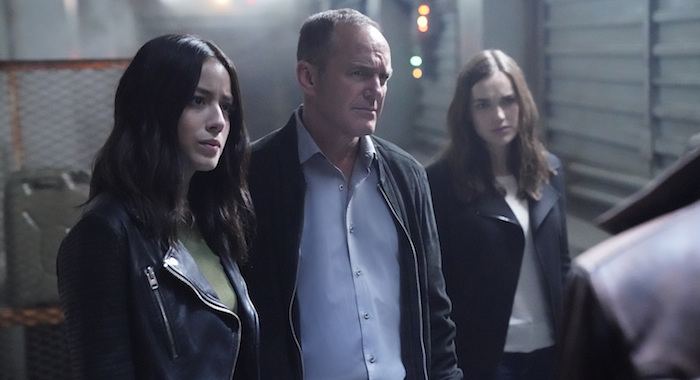 Previous seasons have paired off S.H.I.E.L.D. Agents with their own dramas. There was Daisy discovering she’s an Inhuman and Coulson and May’s revelations about T.A.H.I.T.I. In space, every agent shares one common drama: How the heck do we get back to Earth?

“This year we have them together, hunkered down, in this new place,” Tancharoen said. “It’s all a mystery to them together. The audience is also discovering where they are alongside the characters.”

3. THEY’VE LOST ALL THEIR TOYS 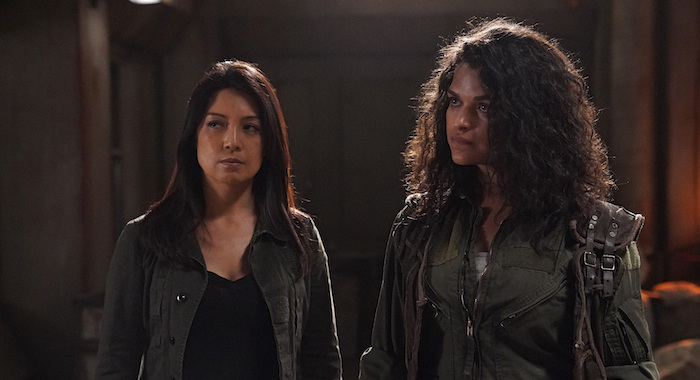 You know what didn’t come into space with the Agents? All their S.H.I.E.L.D. databases and weapons are back on Earth. They’ll have to MacGyver their way out of this one. 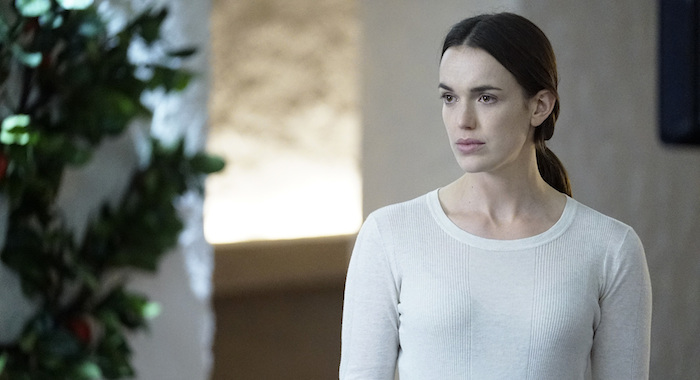 One agent has been through a portal before: Jemma Simmons is being rather hard on herself for ending up back in orbit.

“She’s thinking, ‘Ugh, I’ve done this before. How did I end up here again? That’s just clumsy,’” Henstridge said. “Once, that’s just an experiment, but two is just stupidity.”

The one upside for Jemma is that she got out of this once before. She could be the S.H.I.E.L.D. team’s best shot at getting home.

“I also think she feels a little bit more prepared than maybe other people because she has been here before and she got back,” she said. “I think she’s hoping that what brought them here can also bring them back.” 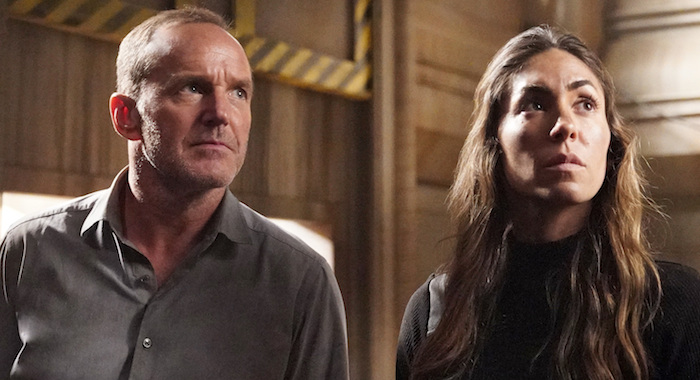 Ghost Rider doesn’t chase souls to space, does he? First things first, Coulson has to get home, but don’t forget he still owes Ghost Rider (Gabriel Luna). Robbie Reyes sure hasn’t forgotten he let Coulson use his powers to destroy Aida, but what exactly did Coulson offer in return? 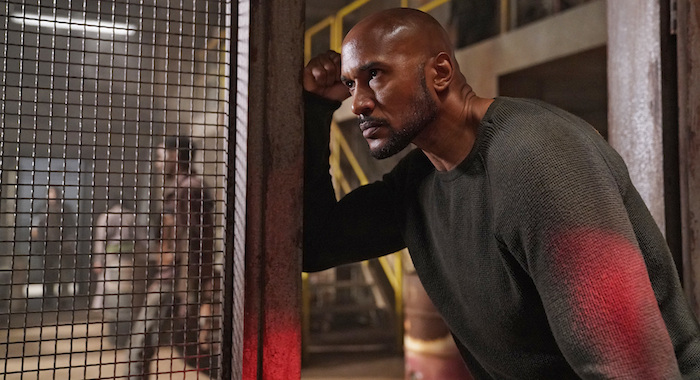 Mack had never shied away from a fight, but all bets are off when he’s in space dealing with aliens. Henry Simmons gets some new toys to play with and finally becomes a true Marvel superhero.

“For the rest of the season, they’re kind of ramping up my character to be more of an action guy,” Simmons said. “It’s always nice to have some new weapons to explore.”

But don’t forget, the best defense is teamwork. 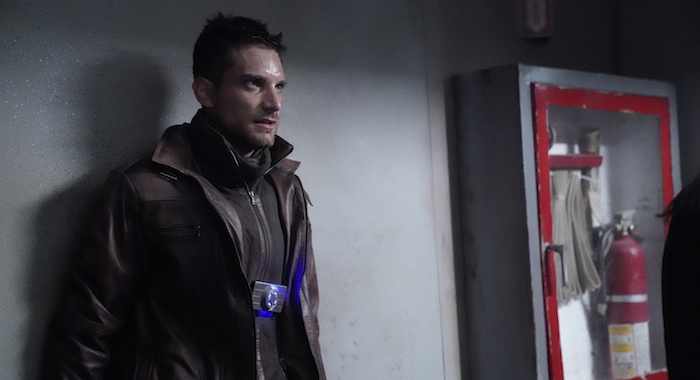 Ward joins the cast as Deke, a survivor in the outer space colony. Back on Earth, Deke might be someone S.H.I.E.L.D. captures, but here they may need him to escape.

“I immediately was super drawn to his moral compass, kind of an adjusted one that comes out of his environment and out of a need for survival and a need for navigating an extremely dangerous world that is the only world that he knows,” Ward said. “Morality has different bounds.”

Once you’ve walked a mile in Deke’s space boots, maybe you won’t judge him so harshly. 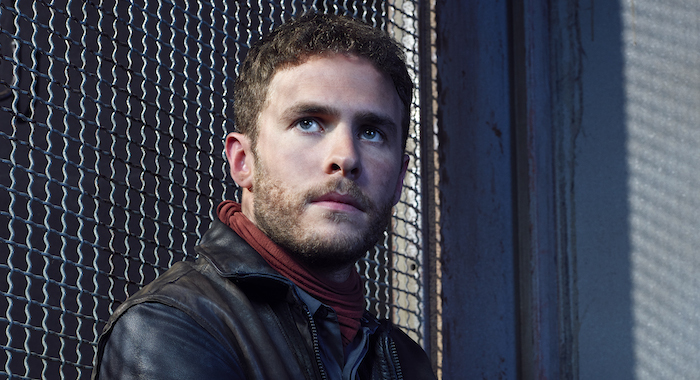 De Caestecker was working on set this week. Fitz is still on the show. There are new photos of him, but don’t expect to see him in the season premiere.

“It seems like if you were to go off the photos, he might be turning up in space, but he’s not there right now,” De Caestecker teased. “I don’t know if I can say when exactly, but it’ll be after episode 2.”

9. THE ALIENS ARE SCARY 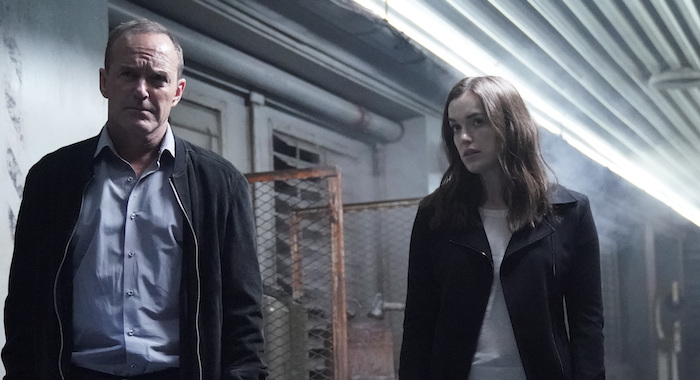 Whedon and Tancharoen really wanted to do the Agents of S.H.I.E.L.D. version of Alien, and that meant making the aliens scary. They even scared the actors when they finally saw the creatures added to their scenes.

“It’s very jumpy,” Henstridge said. “I knew exactly what was coming when we watched the first episode and I jumped out of my seat a couple of times.”

“I love aliens too,” Cordova-Buckley said. “I’m terrified of them. It’s kind of fun to now be in a show where the enemy is aliens, and all kinds. I love Ridley Scott’s first Alien so it’s really fun to be doing another world and all of us getting to do that together.”

Simmons even thinks he underacted now that he’s seen the finished effects.

“[Visual Effects Supervisor] Mark Kolpack has his little iPad, he always carries it around, and he shows us what this thing looks like,” Simmons said. “I was like, ‘Man, if I saw that, I’d have been knocking people down.’ 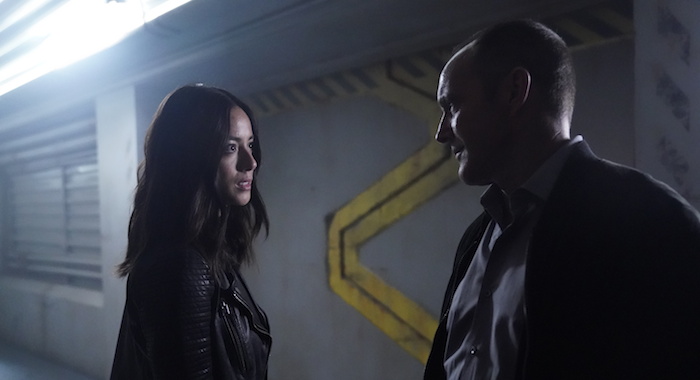 You might be thinking all this space stuff is just the cast acting on a green screen stage. Most of it actually exists on set. In fact, they razed existing S.H.I.E.L.D. sets to build the season 5 sets.

“We fleshed out the world in a real way much more than usual,” Whedon said. “They’re acting with real people. The sets are totally different. [The actors] are immersed in the world. They don’t have to imagine it that much. They’re on those sets. We put it a lot more to our production team to build it.”