Wonder Woman 1984 First Reviews: A Fun, Feel-Good Romp to End the Year on a High Note

While critics say it isn't as stunning as the first film, it's still a worthy entry packed with great performances and a spirit of unbridled joy.

At a time when critics are beginning to look back and list the best of the past year, fans are still looking forward, specifically to one of the biggest, most anticipated offerings (thankfully still!) of 2020: Wonder Woman 1984. Critics are helping in that anticipation now as the first reviews have arrived more than a week ahead of the DC comic book movie’s Christmas release date.

The sequel is said to be well enough worth the wait. WW84 might not the best-written superhero movie, but it’s at least got all the heart, humor, charm and splashy action you could ask for, according to these first reviews. Plus four delightful leads, split on the sides of good and bad. And while it would clearly be best seen on the big screen, your TV should suffice.

Here’s what critics are saying about Wonder Woman 1984:

How does it compare to the first film?

It’s also brimming with the same wonder and joy as the first film.
– Kate Erbland, IndieWire

I missed the more hand-to-hand gladiatorial aspect of so many fight scenes in the first movie.
– David Rooney, Hollywood Reporter

WW84 is a pale shadow of its former self with little of the dynamic energy or charismatic verve.
– Rodrigo Perez, The Playlist

1984 feels like a step back.
– Hannah Woodhead, Little White Lies

Not unlike its predecessor, this film’s finale is overwrought, its stakes overdrawn.
– Mary Sollosi, Entertainment Weekly

This sequel shares the significant flaw of its predecessor… an unwieldy and effects-heavy finale.
– Alonso Duralde, The Wrap 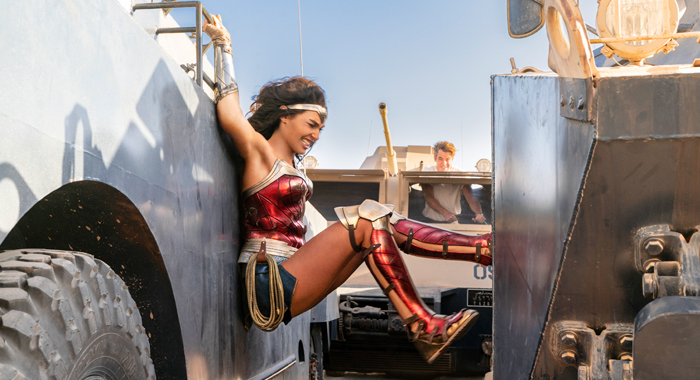 But is it still one of the better superhero movies?

As for the effects, save for one or two examples, they’re mostly practical, which is a welcome change from most other CGI-heavy DC films, including the first Wonder Woman.
– Germain Lussier, io9.com

Does it feel familiar in some ways?

There’s a heavy [Richard] Donner Superman influence throughout.
– Nicola Austin, We Have a Hulk

A zippy sequence… appears to take some cues from the off-kilter opening of Superman III.
– Kate Erbland, IndieWire

Cheetah in many ways is a less interesting Catwoman, particularly as played so divinely by Michelle Pfeiffer in Tim Burton’s Batman Returns.
– David Rooney, Hollywood Reporter

Barbara’s slow transformation… will get compared to Michelle Pfeiffer in Batman Returns, but it’s actually closer to… something out of Sam Raimi’s Spider-Man.
– Hoai-Tran Bui, Slashfilm

The film is light on its feet, colorful and playful in a way not seen elsewhere in the DC Universe. (I suppose Aquaman comes close in terms of sheer, willful silliness.)
– Richard Lawson, Vanity Fair 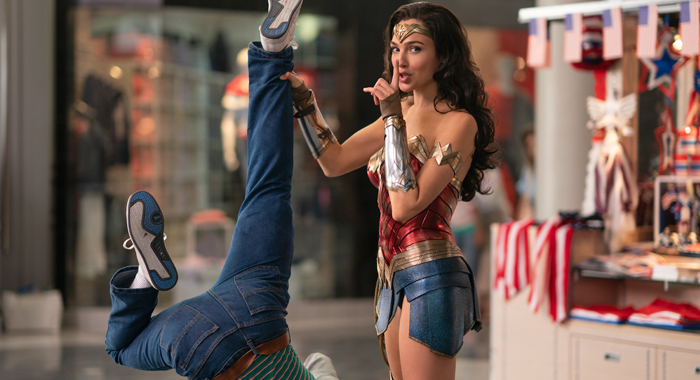 Watching Gadot swing between mall floors on her golden lasso after knocking out the closed-circuit surveillance cameras is an absolute blast…And the stunt work throughout is terrific.
– David Rooney, Hollywood Reporter

Sloppy as the film gets, Jenkins still has a sturdy command of its physics… the slo-mo filming style so heavily favored in the first WW film’s fight scenes is more modestly applied here, which makes the action feel looser, more organic and elastic.
– Richard Lawson, Vanity Fair

There’s action in this film, but it doesn’t really compare to the action in the first film.
– John Nguyen, Nerd Reactor

Its action sequences fail to live up to the joy of Wonder Woman‘s No-Man’s Land scene.
– Katie Smith-Wong, Flick Feast

What about the script and story?

The plot device that runs Wonder Woman 1984 doesn’t make a whole lot of sense. But I don’t think it’s a movie that’s really trying to make a lot of sense?
– Mike Ryan, Uproxx

There’s a lot to love in WW84… but it’s in service of a plot that loses sight of what makes the character so great in the first place.
– Esther Zuckerman, Thrillist

The plotting is an absolute mess that frequently forgets Diana in favor of confusing villain machinations.
– Matt Goldberg, Collider

The sequel’s cluttered screenplay… spirals into such a chaotic swirl of world political disorder, nuclear threats, the “Star Wars program” and satellite communications monopolization that the characters get lost in the mayhem.
– David Rooney, Hollywood Reporter

Does it peak early?

WW84 is at its entertaining best in the early sequences.
– David Rooney, Hollywood Reporter

This opening scene is everything you want from a Wonder Woman film.
– Rodrigo Perez, The Playlist

The first 10 minutes of Wonder Woman 1984 moved me to tears.
– Germain Lussier, io9.com

Or does it just take too long to get going?

Once [the opening] sojourn is out of the way, the rest of Wonder Woman 1984‘s whopping two-and-a-half hour runtime flies by.
– Hoai-Tran Bui, Slashfilm

The pacing does feel a little uneven throughout, with a slow start establishing new characters.
– Nicola Austin, We Have a Hulk

It takes some time to get to the major action set pieces (other than the prologue, which is gorgeous), but it’s too much of a pleasure to live in this well-realized place, populated by a quartet of capable and charismatic stars, to really care.
– Mary Sollosi, Entertainment Weekly

Wonder Woman 1984 is well past its one-hour mark before its various characters and plot points coalesce into a single story, though it’s all so fun and frisky that such issues don’t entirely grate.
– Kate Erbland, IndieWire 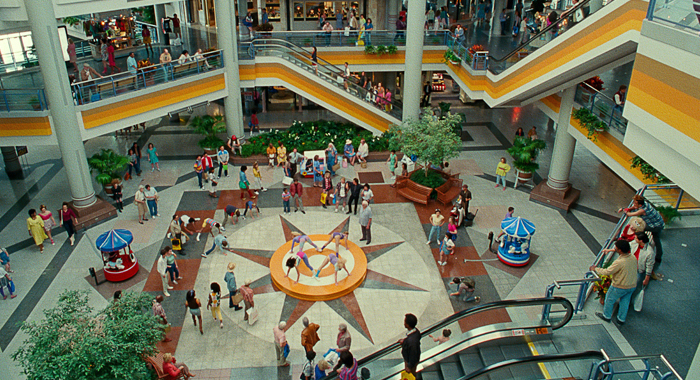 The aesthetics are great, capturing the ‘80s in a way that isn’t distracting or overwhelming but instead feels natural to the characters and the world they inhabit.
– Gabriella Geisinger, Digital Spy

It provides the satirical underpinnings for Wonder Woman 1984 to mock the rapacious greed of the Reagan era and its ongoing reverberations into the 21st century.
– Alonso Duralde, The Wrap

The period proves a strangely apt lens through which to view Diana, whose unflappable earnestness can never fully avoid registering as slightly cheesy, but it goes down easier coming from an ‘80s flick.
– Mary Sollosi, Entertainment Weekly

Does the movie have a good message?

The underlying message the film subtly sends – that all it takes is one person to inspire change in a cynical world – is resoundingly poignant.
– Courtney Howard, Fresh Fiction

There’s a touching message about togetherness that everyone needs to hear.
– Emma Simmonds, The List

Wonder Woman 1984 is a story that only works because it’s about Diana and her distinct evolution, a superhero movie about, of all wild ideas, being a good person.
– Kate Erbland, IndieWire

Wonder Woman 1984 is a movie with a well-intentioned message that has no idea how to put that message into a compelling story.
– Matt Goldberg, Collider 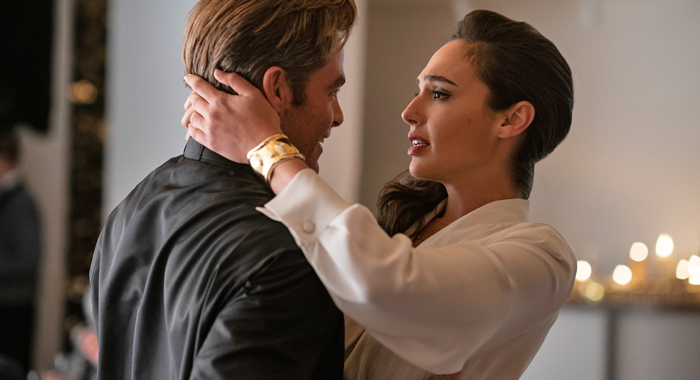 How is it to see Diana and Steve together again?

There really is a beautiful love between the two characters, and in a few key scenes, you’ll be swept up in their romance.
– Nicola Austin, We Have a Hulk

[Pine] and Gadot have solid chemistry and play up the obvious “I missed 70 years of technology” fish-out-of-water bit with great success.
– Germain Lussier, io9.com

The chemistry that Pine and Gadot had in the first film doesn’t radiate in the same way.
– Rodrigo Perez, The Playlist

It feels like a burden in the sequel not simply to the plot but to Diana’s entire character. She becomes almost entirely defined by her devotion to Steve.
– Esther Zuckerman, Thrillist

How is Pedro Pascal as Maxwell Lord?

He is DYNAMITE… Pascal knows he’s in a crazy movie and he amps up the craziness of the plot of this film in every scene he’s in.
– Mike Ryan, Uproxx

If there ever was a role that played perfectly to Pascal’s natural charisma, it’s Maxwell Lord.
– Hoai-Tran Bui, Slashfilm

There will be comic book fans who will not take a liking to certain changes in the Max Lord character. I, for one, love the different take on the villain.
– John Nguyen, Nerd Reactor

The overt Trumpiness, especially this late in the game, is just too on-the-nose to be amusing.
– David Rooney, Hollywood Reporter

Game as Pascal is, I think he could have been jettisoned and Wiig moved to the center.
– Richard Lawson, Vanity Fair 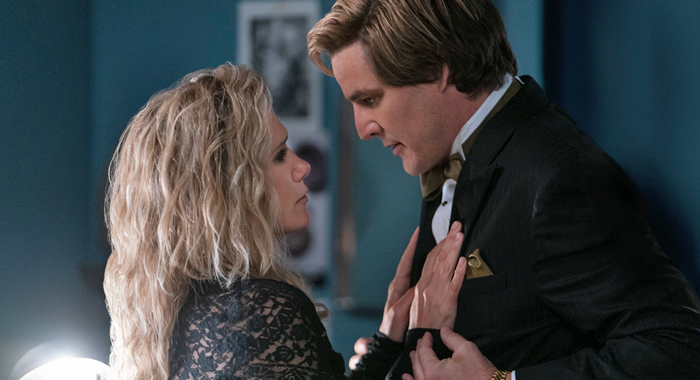 And what about Kristen Wiig as Cheetah?

Wiig masters the role – at first, it’s the dorky comedy star we all recognize; by the end, there’s a fire we’ve never seen before.
– Clarisse Loughrey, Independent

Wiig does a great job in the Cheetah role and is truly hilarious as Barbara in the earlier scenes.
– Linda Marric, The Jewish Chronicle

Wiig genuinely surprised me with her performance, particularly in the action sequences… however she does become somewhat underused toward the final act, which is a shame.
– Nicola Austin, We Have a Hulk

Wiig is terrific, but there’s just not enough of her.
– Fionnuala Halligan, Screen International

Does the film work well enough on the small screen?

I do wonder if I’d have gotten antsy in a theater, as opposed to sitting on my couch at home where I could have watched another hour of Wonder Woman and Maxwell Lord having a blast.
– Mike Ryan, Uproxx

This reviewer can only assume [the visuals] must’ve looked much cooler on a big screen; on my TV at home, they ranged from fine to excellent.
– Angie Han, Mashable

Dare we ask if this is the right movie for these times?

As trite as it sounds to repeat this far-too repeated phrase, [it’s] a much-needed balm for 2020.
– Hoai-Tran Bui, Slashfilm

At this point in 2020 it feels trite to label anything as “what we need right now,” but spending just shy of three hours in the company of such buoyant, heartening storytellers gave me some of the most uncompromising feelings of joy I’ve felt all year.
– Ella Kemp, WeLoveCinema

Every brazen beat of Wonder Woman 1984 feels like it’s arrived to pulverize this miserable year into dust.
– Clarisse Loughrey, Independent

What we need right now this movie can’t solve, but just maybe, it will inspire someone who can.
– Peter Debruge, Variety