What We Do in the Shadows Season 3: Will Guillermo Learn to Wield His Powers... And His Affections?

Harvey Guillén and Kayvan Novak, stars of FX's acclaimed vampire comedy, talk the shifting relationship between Nandor and Guillermo and how this biting black comedy reflects its fans' own lives. 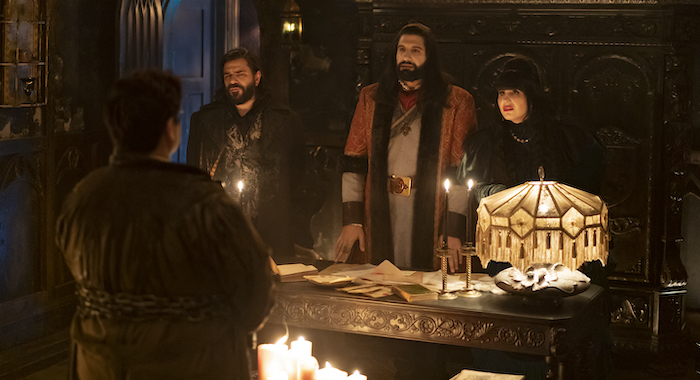 There’s a lot of snow in the third season of What We Do In the Shadows. That’s generally what happens when you film in Toronto during the height of winter. But that didn’t stop the set of the FX sitcom from feeling like summer camp.

“Going into third season, we found our groove with each other,” says star Harvey Guillén, who plays vampire familiar-turned-accidental vampire hunter Guillermo. “Everyone’s so good at what they do — I always call it playing hot potato, and the potato never drops. You could play for hours with this group and it’s just improv, improv, improv, and it never gets old. So that’s the kind of summer camp activity you want to do.”

Filming started a few months later than usual due to the pandemic (hence the move on FX’s schedule from spring to fall), which meant that the close-knit cast hadn’t seen each other in more than a year. It led to more than a little self-doubt, but luckily the group quickly fell into their old rhythm — just with more safety protocols (masking, testing, disinfecting) this time.

Says star Kayvan Novak, who plays ancient vampire Nandor the Relentless: “We didn’t realize how much we all missed each other because we’ve been apart for a year. And I think the longer time we did spend apart at home with our families, the more it felt like, oh my God, how are we going to do this? How do I be Nandor again after all this time? Can I be funny anymore? What’s happening? And then as soon as we got into each other’s radar it just fell back into place in the most beautiful way. I think it was because we’d been apart for so long, and it was really nice to be in each other’s company. That helped a lot with the new world order.”

Rotten Tomatoes spoke with Guillén and Novak ahead of the two-episode season 3 premiere on Thursday, Sept. 2 at 10 p.m. on FX. The duo revealed more about Guillermo’s relationship to master Nandor, whether the rest of the Staten Island vampires (Matt Berry‘s Laszlo, Natasia Demetriou‘s Nadja, and Mark Proksch‘s Colin Robinson) have managed to evolve throughout the course of their immortality, and whether Guillermo will realize how to wield his newfound power as a vampire hunter.

Novak: I think from Nandor’s perspective, he’s had the rug pulled from underneath him in a way. He’s gotten very used to this power dynamic, which is that Guillermo is the lowly familiar and he’s holding all the cards. And suddenly that’s changed [with Guillermo’s discovery that he’s descended from the famed vampire-hunting Van Helsing family]. I definitely felt that at the end of season two. I was like, this relationship will never be the same again. It motivates him to go, “okay, have I got to be nice to this guy?” Guillermo is in danger now. He’s in peril. I can’t pretend anymore that I don’t care for him. And I think that’s something of a mini revelation within himself — he doesn’t want to care, but he does. That’s a very human emotion to go through, where you don’t want to care about something, but you find yourself compelled to care. We want to be colder than we actually are. We want to be more single-minded. We want to be more ruthless than we actually are. The human heart finds a way of letting us know that that matters, and I think that’s nice to see between Nandor and Guillermo.

Rotten Tomatoes: Is Guillermo in love with Nandor?

Novak: Of course he is. [To Guillén] Of course you are.

Guillén: After spending so much time with someone that started off as a master-and-servant relationship, the waters can get murky. I like putting Guillermo on a tightrope, and the balancing act of any given moment he could fall one way or the other where he’s like, whoa, he’s in love with him? Or, oh, I guess he was just really looking for a true friendship and connection with another human being. But I think that there is something there that he definitely has love for him. He would not stick around if he did not have love for Nandor. You have to love someone to stick around that long and to put up with the mistreatment. It’s almost Stockholm Syndrome. What that means at the end, I don’t know. We’re going through that journey together. But we definitely start asking questions this season, especially about sexuality, which is a hard conversation to have in general. And given Guillermo’s background and his upbringing, that’s not a conversation that you have at the dinner table. And we have that conversation at a dinner table. 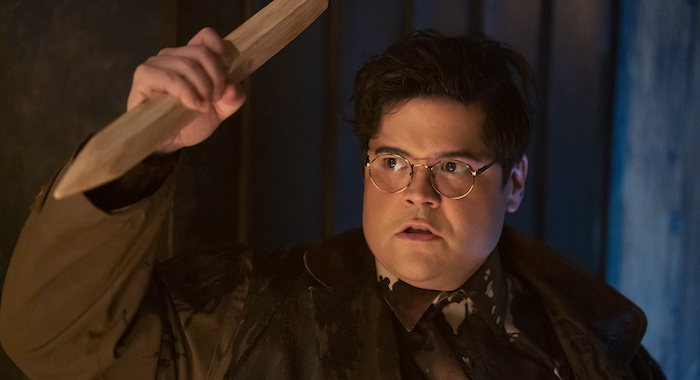 Rotten Tomatoes: Now that Guillermo knows he has this power, he feels like a bubbling pot — like he’s got to explode at some point, right?

Guillén: Well, everyone has their limits, right? And you can push people’s buttons, but eventually you can’t be surprised if they push back or they explode. Not that that’s justifiable, but someone can only take so many beatings, or so many things going wrong or being mistreated, that it’s human nature — you want to defend yourself. Everyone has their limits and Guillermo is definitely being pushed to his this season. And there will be a big explosion from it.

Rotten Tomatoes: In the second episode of the season premiere, Kayvan ends up having to impersonate the other vampires impersonating Nandor. What was the most fun impersonation that you got to do? What was the hardest part?

Novak: When I read that I was like, what have they done to me? I’ve got to pretend to be all these characters and I’ve got to portray them as Nandor, but it’s them, but it’s Nandor, but it’s them. I’ve got to mimic their voices, and they might be in the same room as I do it. Usually if I’m mimicking someone they’re a very safe distance away. But I thought that there’s only one way, really, of giving myself the best shot to pull it off, and that’s just asking Matt, can you record your lines for me? Because at the end of the day, I’m playing Laszlo. And then the same with Mark. And then with Guillermo’s scene, I didn’t ask Harvey to record his lines because the scene felt more about the other person and we did it so many different ways because it was such a subtle scene. 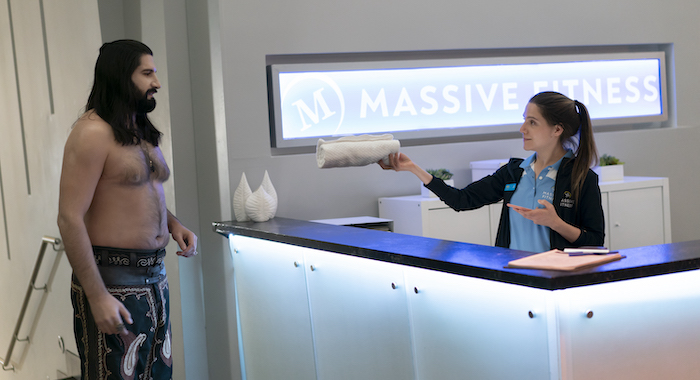 Novak: I haven’t actually seen this episode yet. So I’m still kind of dry-mouthly waiting and going, Oh God, no, what have I done? It felt very vulnerable for me to do this because at the end of the day, the audience is going to go, “Well, I know that character. And I don’t believe that that’s really Laszlo.” Or, “I don’t believe that that’s really Guillermo. I don’t believe that’s not Nadja.” So it was just buckle down and go to town and go for broke, basically. A good impression for me is always about finding a groove, whether it be physically — with Matt, I started leaning on one leg and kind of like this with my hand and suddenly you’re like, okay, that felt good and that felt fun. It was really contorting my face for Guillermo in a way that Harvey’s eyebrows can do. Mine can’t necessarily do that, but it’s that worry that he constantly has of being found out. Because his heart’s so involved in everything.

Rotten Tomatoes: I think it turned out really well, to the point where I wondered if everyone ADR’d (Automated Dialogue Replacement) your lines.

Novak: I think all of my voice work’s in there, apart from Nadja and Kristen [Schaal, whose character returns this season].

Rotten Tomatoes: Part of the fun of the show is that the characters don’t change. They’re just their own self-absorbed selves. No spoilers, but this season they have a new mission that could be challenging for them. Do you want to see them change? Do you want to see them incrementally grow? Or is it fun to play people who live so long that it doesn’t actually matter? A year is like a second for them.

Guillén: If we look back at the first season, every episode Guillermo added a little bit of a puzzle to his trajectory, and the vampires would wrap up their story in that episode. So it’s nice to see the investment in each episode leading up to something with all the characters, which is really nice. In this season I think we did that really well, especially with Nandor’s character and love interests and past lovers coming up and what that does to the dynamic and how that makes people feel in the group. And also with putting Nandor and Nadja’s characters in a place of power and Mark’s and Matt’s characters becoming friends. It shows this really nice, intimate friendship growing with them. So it is nice, and it gives you something to aspire to every episode. 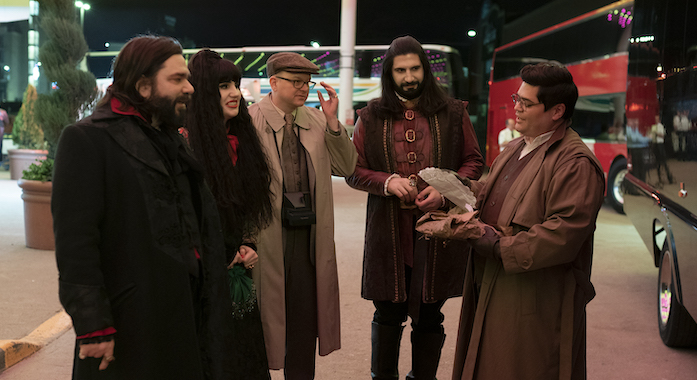 Novak: I mean, characters that make you laugh, goofy characters, vulnerable characters, stupid characters, you never want them to lose that sense of vulnerability. The evolution of their relationships with each other is always something that is super interesting and exciting to play. I think the beauty of Laszlo, for example, and the beauty of Nadja is they will never change. And the way they live their lives with this kind of abandon and this kind of like, “f–k it, it’s my way or the highway” [ethos]. Those kinds of characters, you really enjoy that sense they give you of wow, I would love to be more like them in my real life. That fearlessness. With Nandor, he’s more vulnerable. He reminds you of all the times you’ve f–ked up. And that’s how you relate to him.

With Guillermo, it’s, oh my God, if I was stuck in the middle of all these mad people, I would have the same reaction. Guillermo has always got you on the edge of the seat. So I think in answer to your question without having answered it, I’m sorry, is that that’s the beauty of the show for me: It offers up all these different avenues and all of these different reminders of your own life. And all these different lifestyle choices that you could adopt if you wanted for a bit. And then find your own.

What We Do in the Shadows season 3 premieres Thursday September 2, 2021, and new episodes air Thursdays at 10 p.m. on FX.