What to Watch With Fear the Walking Dead's Maggie Grace

The former Lost star discusses her return to television, keeping secrets, and cutting the cord.

TAGGED AS: AMC, Comic Book, what to watch 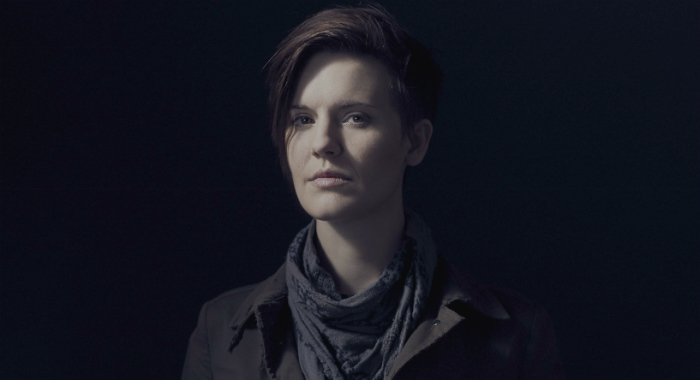 The fourth season of Fear the Walking Dead moves the post-apocalyptic (or, maybe mid-apocalyptic) action from Mexico to Texas. But that’s not the only major change to hit the Walking Dead spin-off. There will also be time jumps and a new group of survivors fighting to make a life in a post-walker world.

One of the newbies is a familiar face: The Walking Dead‘s Morgan, who moves from the flagship series to its spin-off. TWD‘s Lennie James is joined by Lost and Taken star Maggie Grace and fellow new cast members Garret Dillahunt (Raising Hope), Jenna Elfman (Dharma & Greg), Kevin Zegers (Gracepoint), and Evan Gamble (Hap and Leonard).

Ahead of the season premiere, which also acts as a crossover between the two series, Grace spoke to Rotten Tomatoes about her fierce new character, returning to television more than a decade after Lost, and having to keep mostly everything about her role secret.

But first, she dished on her deepest, darkest DVR secrets, and divulged her TV viewing habits and which other new show she’s most looking forward to seeing. 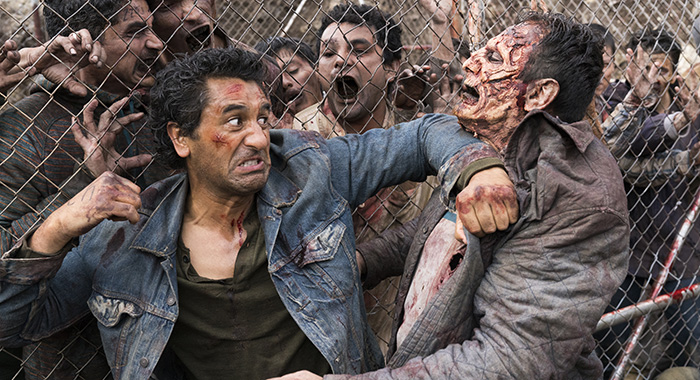 Rotten Tomatoes: You cut the cord?

Like, I’ve never had the cord to begin with.

We’d ask what’s on your DVR, but you don’t have one.

I travel a lot and I really like to sit down and watch something with the intention to watch it as opposed to zoning out. I plan to watch things. I’m not big into channel-flipping. I don’t love that experience where I feel like hours are stolen from me and I’m not sure what I watched. 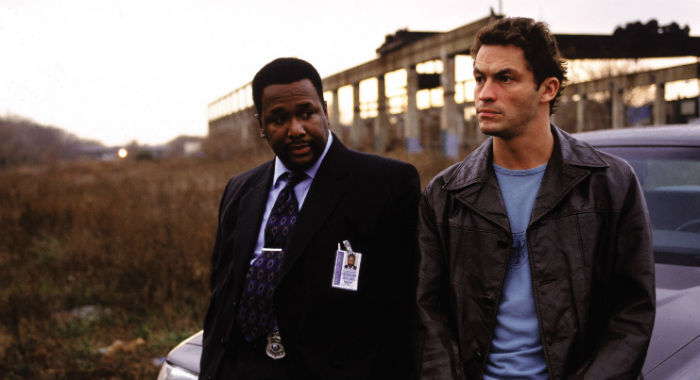 I’m gearing up for a re-watch of The Wire, the greatest television show ever made. And The Honorable Woman, it’s this great hidden gem. 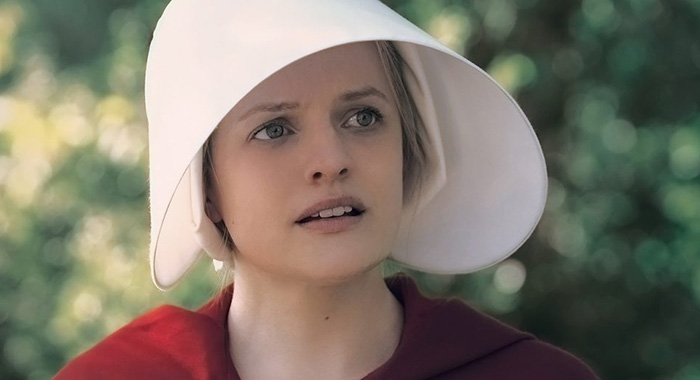 Jean Bentley for Rotten Tomatoes: Tell me about your new character, Althea.

Grace: She’s both unusually capable and emotionally deep. Somehow after everything she’s been through, even before society was lost, she uniquely prepared not only to survive but thrive in this post-apocalyptic environment. She’s got a sly sense of humor. She’s a bit of a wild card. I’m never quite sure what I’m allowed to say about season 4 — there’s so much I want to say about her; there’s so many things I love about her. I think she’s scrappy, which is, for me, the most fun part about playing her. She’s always looking for solution after solution.

RT: We’ve seen in the trailer that she meets up with The Walking Dead‘s Morgan. What was it like working with Lennie James, who just joined the show?

Grace: I adore Lennie. I’m really happy it was him. He’s a really kind, generous actor. I’ve loved his work in other things, so I’m really glad our characters intersect so much. Everything’s easy and relaxed with him. 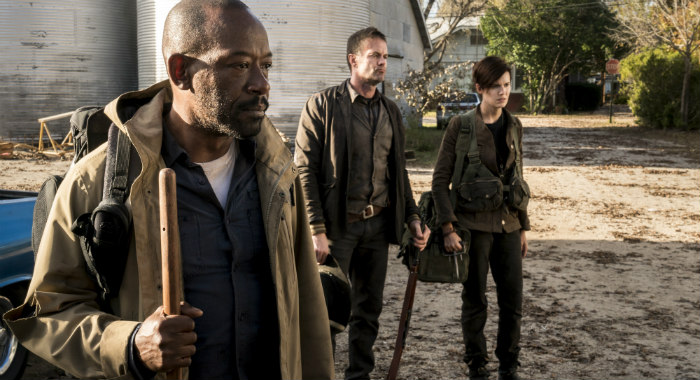 RT: What’s it like joining a show in its fourth season? It seems daunting, though that not might be the right word.

Grace: No, daunting is the perfect word. It’s like switching schools halfway through middle school — everyone already knows each other, you don’t know where to sit at lunch. It’s definitely intimidating. And there’s a lot to catch up on in terms of the mythology of the whole Walking Dead universe. I came into it with very little notice so there was a lot to learn along the way.

RT: Although Lennie isn’t new to the Walking Dead universe, he was new to the show too. What was that like?

Grace: Lennie and Garrett and I had a lot of time together right at the beginning, which was great because we were all in the same boat. We were all new to the show, so that worked out perfectly.

RT: With the show’s move to Austin, Texas, from Mexico, there were probably a lot of new crew members to.

Grace: It was an odd feeling. It was unlike any work experience anyone’s ever had. It was a mix of crew that had been there since the beginning and some brand new crew that was based in Austin, and cast that was new and cast that had been there since the beginning, and writers and the showrunners that were there in a new location. But I think reinvention has certainly been a part of the series from the beginning, whether it was season 2 on the boat or a Broke Jaw Ranch in 3, it does keep reinventing itself. This is certainly a more extreme reinvention, but hopefully one that’s exciting and leaves viewers unsure of what’s around each corner and what to expect. I think there were a lot of great surprises in it as an actor. 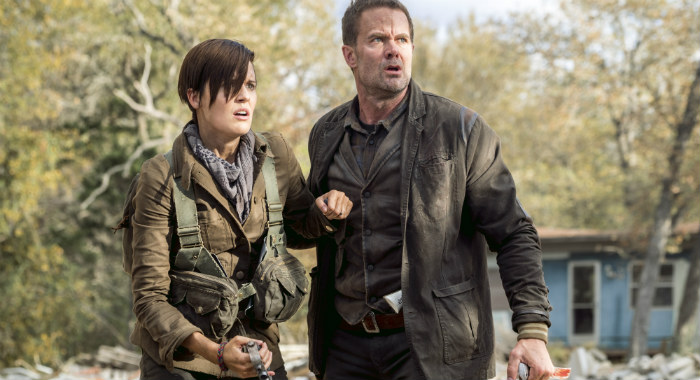 RT: There’s going to be a time jump this season, but you probably can’t say too much about that.

Grace: I will say this, the writers have certainly played with time in interesting ways in this season. I never know what to expect.

RT: You were on Lost for several years, another show about surviving in a beautiful landscape. Do you think there are any more similarities between the two shows?

Grace: It really does feel similar day to day because you have this ensemble cast of grounded characters going through extraordinary circumstances in a really rugged environment. I would say that’s a fair comparison — just the ensemble and that environment.

RT: What’s it like to be a series regular on TV again?

Grace: That’s great, I love the sense of camaraderie it gives, and it serves as a nice anchor in life to keep going back to the same place. I had avoided doing television for many years, but I’ve really come to love having the same group of people and really getting to know the crew and having a character that can unfold over time. And I think that TV is the place now where all the creatives or directors can really make choices. That’s what’s happened in the last decade.

RT: Good job in your first season of cryptically teasing the show because you can’t reveal too much information! It’s definitely a hard task.

Grace: There’s so much I want to say! I don’t understand [the secrecy], because I would just think it would make the audience more excited to watch it — not that they wouldn’t watch it. It got really comical at WonderCon because it was so, so basic. It was like, “Yes, emotional things happen to various characters in various geographical locations.” I was like, “Aw, come on.”

Fear the Walking Dead season 4 premieres Sunday, April 15 at 10:10 p.m. after the season 8 finale of The Walking Dead, then moves to Sundays at 9 p.m. weekly on AMC.