Ava DuVernay, star Kaci Walfall, and more of the talent behind the CW series offer a primer on the new show.

A new year comes with a new superhero over at The CW. But as we learned during a recent press conference with the producers and stars of Naomi — debuting this Tuesday — the program is anything but traditional. The titular superhero is unusual among DC Comics characters thanks to a handful of factors. But that also made her uniquely suited to join the network lineup alongside The Flash and Stargirl.

Of course, a little primer on Naomi McDuffie (Kaci Walfall), her town of Port Oswego, and her world may help those considering watching the show and those wondering how it differs from the other established hero programs on the network. Here are the four key takeaways we discovered about Naomi.

1. The Show Does Not Take Place in the Arrowverse 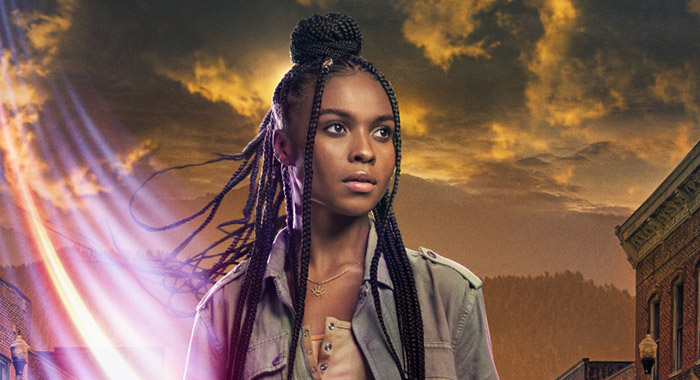 Despite the considerable effort the network went through to combine its superhero shows into one shared universe in 2019’s “Crisis on Infinite Earths” crossover event, Naomi is not set on that Earth-Prime. As executive producer Ava DuVernay put it, “this is the first part of the Naomi-verse!”

According to fellow executive producer Jill Blankenship, the plan was always to place Naomi in her own reality away from the established continuities and superteams.

“We knew right from the jump that we wanted Naomi to exist in her own separate universe,” Blankenship explained.

The choice makes sense for various story reasons and for production realities. The program is shot in Atlanta instead of the Vancouver home of the Arrowverse. Also, Naomi is produced by a completely separate company with no involvement from Berlanti Production, the group behind Arrow and its spinoffs. Although, the producer was quick to add, “when it comes to crossovers, I think nothing is ever off the table.”

Of course, the first season might be a little early to expect an Arrowverse style crossover.

“You won’t see any crossover season 1,” DuVernay said. “We are really just focused [on Naomi] … She is firmly in her story, and we are singularly focused on that journey.”

And for those wondering about the Earth-designation of Naomi’s reality (like the Arrowverse’s Earth-Prime and Stargirl’s Earth-2), Blankenship later told us, “Stay tuned.”

2. Naomi Is a Coming-of-Age Story

Free of direct connections to its fellow CW hero shows, what is Naomi? Created by Brian Michael Bendis, David Walker, and Jamal Campbell, the initial six-issue comic book miniseries centers on an adopted teenager in an Oregon town who learns her origins are far more cosmic than she could imagine. From the episodes we’ve seen, the same can be said for the television series — although DuVernay quickly drilled down that premise to its key component.

“I think of it as a coming-of-age story first,” she said. “All comics are really personal human stories about the journeys that we all take, written with issues of heroism and magic. But the best stories are the ones where things are happening that we can all relate to.”

Blankenship added, “[It’s about] this young, Black, teenage woman who is coming of age, who is discovering this power within herself, surrounded by her friends and her family and all these characters in her life … [It’s] really keeping alive what I consider to be the spirit of the comics.”

Indeed, the first big scene — in which Superman flies over the town and causes a commotion — is replicated from the comic, although with an interesting twist that calls into question the existence of Superman. Meanwhile, the incident starts Naomi on a road to self-discovery as she starts manifesting powers shortly thereafter.

For Walfall, who appears in her first leading role as Naomi, self-discovery means both she and Naomi are literally learning the ropes at the same time in terms of stunts and powers.

3. High School Love Plays a Part in Her Journey

Emotionally, Naomi’s journey also comes with the usual pitfalls of high school life — although manifested in an unusual way for series television: She’s part of a potential romantic quadrangle. Granted, she may not see it that way, but with potential love interests in the form of high school jock Nathan (Daniel Puig), social outcast Anthony (Will Meyers), and comic shop employee Lourdes (Camila Moreno), the title character has plenty of adolescent tension to compete with her growing superpowered concerns.

Blankenship said she took her cues from the current generation of young adults because “I find their attitude towards sexuality, and toward this aversion to labels, so inspiring. And I think that’s something that’s rooted in reality and that we really wanted to bring to the show in a real grounded way. And we do continue to have that running through the season.”

4. Naomi’s Powers Are a Source of Tension 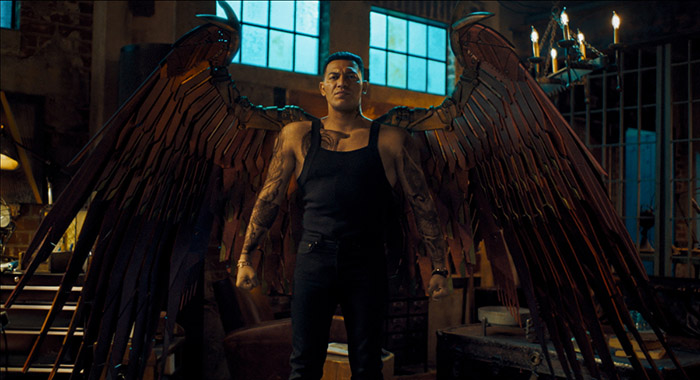 Naomi’s powers are also the concern of tattoo shop owner Dee (Alexander Wraith) and car salesman Zumbado (Cranston Johnson). Both are in Port Oswego for very specific reasons and, as the series begins, they try to stay out of each other’s way. The characters names may be familiar to readers of the Naomi comic, but the roles may also be slightly tweaked.

“We will come to a point where we realize that maybe we’re gonna have to put some of these things to the side in order to work for a common good,” Johnson teased.

The combativeness between the two also reflects Naomi’s own misgivings about discovering her powers.

“I do genuinely ask myself, what would I do if I found out I had powers? Would I be maybe not joyful,” Walfall said. “As the show goes on, you see that maybe you finding you’re a superhero is not something that you’re completely enthusiastic for. Maybe it makes you different … and you already feel different.”

That tension spoke to DuVernay as she first discovered Naomi was in the DC Comics library. For a character to examine that emotional dynamic is “really the step to becoming yourself, the steps to realizing your destiny, the steps that it takes to become who you’re meant to be.”

5. Naomi’s World Is Open to Adaptation 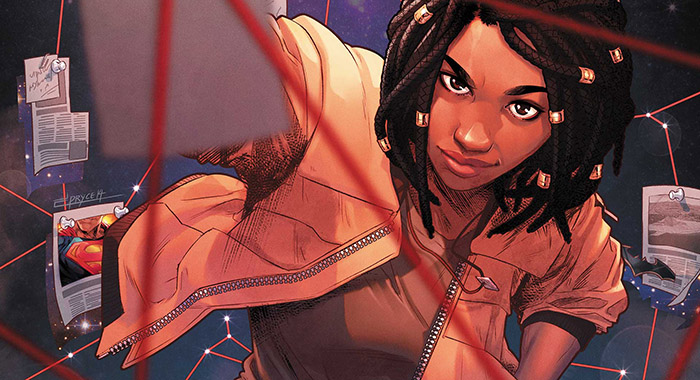 When DuVernay heard about the Naomi comic book, she thought “This must be mine, because it was different than most fully-formed superheroes.”

Part of that uniqueness is its relatively short publishing history. Where the other DC Comics heroes at The CW have decades of story to work with — even Batwoman’s Ryan Wilder (Javicia Leslie) benefits from 80 years of Batman lore — Naomi debuted in 2019 with six issues of her own book and appearances in titles like Justice League. A second miniseries starts in March. And although the DC Universe offers plenty of recognizable concepts for the series to use, Port Oswego and its populace presented a new canvass for DuVernay, Blankenship, and the actors.

Beyond the best-friend status of Naomi and Annabelle (played on the series by Mary-Charles Jones) and a few fleeting moments with some of the other kids in town, Port Oswego was a DC Comics town waiting to be explored.

DuVernay and Blankenship added a nearby military base — where Naomi’s adoptive father, Greg (Barry Watson) is stationed — and a class struggle between the more well-off children of the stationed personnel and the “townies” like Anthony. And although only glimpsed in the episodes we saw, that socio-economic distinction will have an effect on everything Naomi’s group of friends and potential partners do — from parties to helping their super pal investigate a mystery.

“We know the history of Annabelle and Naomi and how they became friends,” DuVerany added. “We know, basically, the broad strokes: Will’s [character] is a townie. Daniel’s is a military kid.” 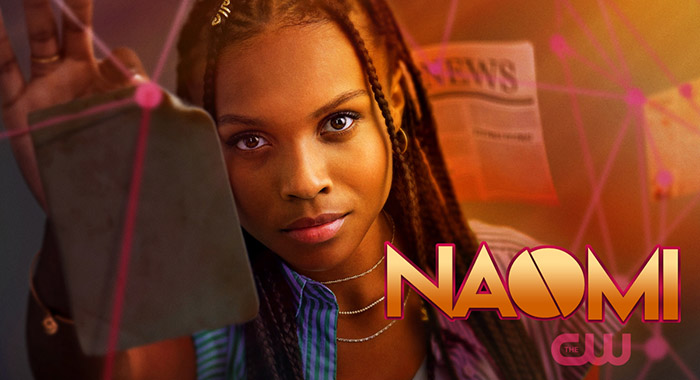 For their part, Bendis, Walker, and Campbell have encouraged the production team to add, subtract, and rethink wherever they feel best.

“What they created was this incredible foundation. But what was so lovely is that they also really gave us the freedom to Ava and I to make it our own and to really run with it,” Blankenship said.

They’ve also been fairly “hands-off” according to DuVernay: “They said, ‘this is our baby and you take her in, you raise her in the way that you want.’”

That sense of openness to explore is also something DuVernay and Blankenship wanted to impart on the cast. Going from the broad strokes of the characters, DuVernay said they “really wanted these young actors to have the freedom to paint it in. I think when you give too much [information] people start to feel restricted. And, and so we’ve taken some things into the writer’s room, things that [the cast] are interested in.”

Jones added, “I will vouch for Jill and Ava and say one of the cool things and very respectful things about both of them as writers is they’re not afraid to ask us if this is a cool trendy thing to say, or if this was, you know, two years too late. Because there are many times that you watch TV and you’re like, listen, we move on, we don’t use that slang anymore. This is not a thing. I know it was last year, but it’s gone. It’s done.”

7. Normalization Is Part of the Plan 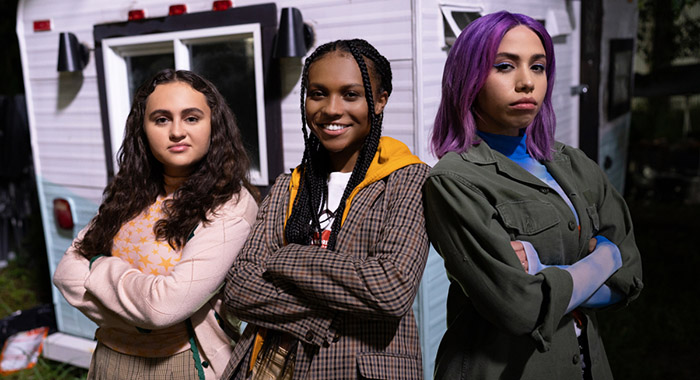 Like all of DuVernay’s work, Naomi will not shy from social issues, but it will examine those things from a different vantage point: normalization.

“We’re doing really muscular things as it relates to race and gender and class, but we’re doing it by playing it normal,” she explained. “It’s just a part of the everyday — and I say it kiddingly, but it is real. The more that you can portray images without underlining them, highlighting them and putting a star next to them, that show a different kind of hero, right? That center on a black girl, that centers different kinds of folks, right? We start to make that normal and that’s a radical, revolutionary thing.”

That normalization will extend to issues of race, sexuality, and gender representation; in fact, viewers will find a matter-of-fact statement in the first 10 minutes of the show that would drive an entire episode of a different program.

Ultimately, Naomi is about “a Black girl who loves Superman and becomes like him,” and that still fits in the overall scope of DuVernay’s work.

“I just really seized the moment. There’s so many platforms, so much going on, so much freedom that I dedicated a couple of years to say, ‘I’m gonna try everything that I wanna do,’” she explained. “I have an unscripted drama, have animation, have DC work, still doing my social impact, civil rights, raise culture stuff — and why can’t it be all of those things? So, I’m trying it out. I’m having a great time with it and I’m just following my heart’s desire and enjoying myself.”

Naomi premieres 9/8C on Tuesday, January 11 on The CW.