Welcome to Chippendales: What to Know About Kumail Nanjiani's Hulu Miniseries

The true-crime miniseries focuses on Somen “Steve” Banerjee, the Indian immigrant and founder of the Chippendales male revue who became consumed by his own quest for power and fame. 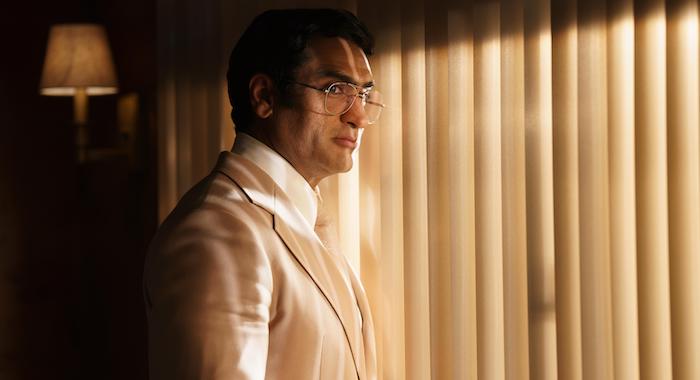 The story of Welcome to Chippendales is downright Shakespearian.

Book-ended by four grisly deaths, the true-crime miniseries created by Pam & Tommy’s Robert Siegel and counting Girls alum Jenni Konner as its showrunner focuses on Chippendales founder Somen “Steve” Banerjee. Portrayed by Kumail Nanjiani, the Indian immigrant is so obsessed with American ideals of wealth and celebrity that they consume him. His downfall also impacts the lives of others in his orbit, specifically Chippendales choreographer Nick De Noia (portrayed by Murray Bartlett).

And it all happens behind the scenes of the dollar bills, banana hammocks, and body oil that was the all-male revue Chippendales night club of the ’70s and ’80s (think the movie Magic Mike, but real).

“He really embraces a specific version of success, which to him is the signifiers of success: nice watch, nice clothes, nice car, big house, beautiful women,” Nanjiani told Rotten Tomatoes of his Hugh Hefner-obsessed, awkward-in-his-own-skin lead. “I think America’s relationship with how you want to present wealth changes decade by decade, and in the ’80s, being ostentatious was accepted and expected. It doesn’t matter if he is successful. He just wants other people to think he’s successful.”

In preparation for the miniseries’ premiere on November 22 on Hulu, Nanjiani and others involved with Welcome to Chippendales shared more details about this complex and sensational story. Here are five things viewers need to know. 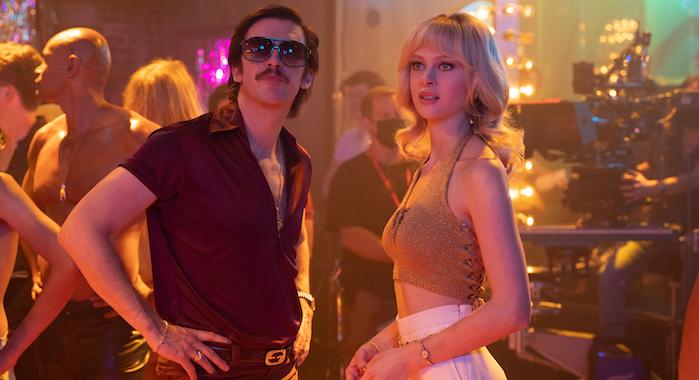 Steve Banerjee’s obsessive hatred and jealousy of the much more gregarious Nick De Noia is the main focus of Welcome to Chippendales — and it is the one most associated with the empire’s so-called curse.

But the show covers another important crime in this story: the murder of Playboy Playmate Dorothy Stratten, who was shot by her estranged husband Paul Snider in 1980 before he took his own life. Paul and Dorothy, as portrayed in the Hulu series by Dan Stevens and Nicola Peltz, were friends of Steve’s and were influential in turning his business from a failing gambling hall to the beginnings of an international success story. (According to the series, it was Dorothy’s idea to have the dancers wear collars and cuffs similar to the bunny outfits servers wore at the Playboy Lounges).

“That story set up that there’s going to be some crime and punishment in this,” Konner said as to why the Stratten murder is factored into this limited series. “But, also, it’s the story of Steve and Nick, and that was showing how dark it was going to get.”

The series also suggests that, with Paul no longer involved in the club, Steve can rewrite the narrative of the club’s early days.

“I have to think that even the sort-of ‘good Steve’ at that point must have thought, ‘Well, now I don’t have to share,'” Konner said.

2. Homophobia and Racism Are Addressed — Just Not in a Traditional Way 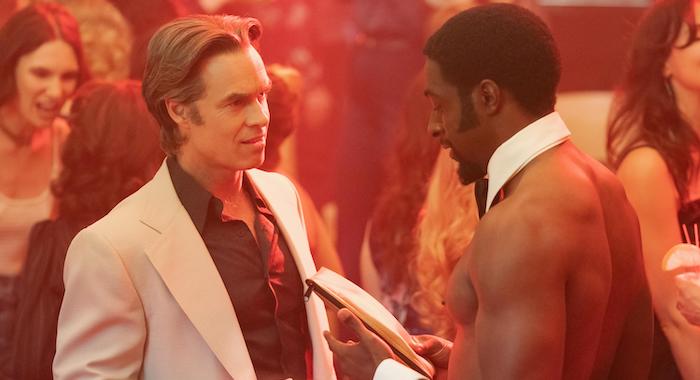 At its height, Chippendales was sued by several Black law students at UCLA for its discriminatory practices on admittance. This is discussed in the series. But the story also introduces the character of Otis. Played by Quentin Plair, he’s the most talented dancer in the ensemble, and Bartlett’s Nick frequently highlights him in routines. But he’s also the only Black member of the revue, and that becomes a sticking point.

Similarly, Steve got the idea to market scantily clad male dancers to straight women after Dorothy and Paul took him to a gay club. As depicted in this story, he’s clearly uncomfortable in that surrounding. But he’s not necessarily homophobic. 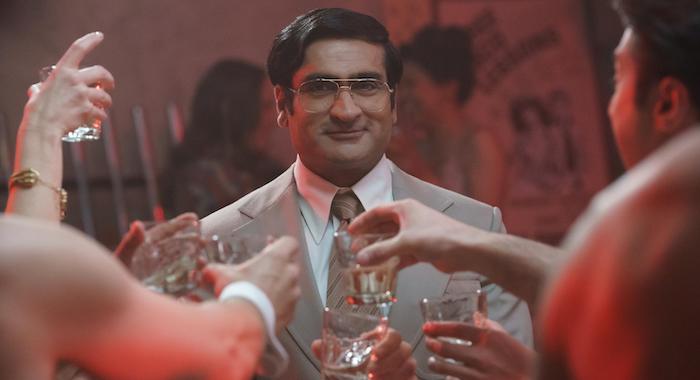 This was a challenge to Nanjiani. As a comedian, he is used to being charming and engaging.

“It was such a complicated character, and I wanted to approach him from every single angle,” he said. “He has this fire in his belly that he’s terrified of, which is really his emotions, his feelings. He’s very scared of feeling what he is. And, so, every molecule of his body is always working to keep that fire compressed in his belly.”

He added, “What I did connect to with him pretty directly was this idea of coming to this country and trying to make it in a world that’s not built for success for immigrants.”

As someone who was born in Pakistan, Nanjiani saw in Steve his own struggles of “getting into Hollywood, and the obstacles that I faced there. It’s not an industry that’s made to be successful for an immigrant.”

Nanjiani also counters previous reports that the show was ever temporarily called Immigrant. He said he doesn’t like that title because the show is an ensemble piece and “way more than just about this one guy,” and that “title would be overplaying the immigrant aspect of the story when that’s really one piece of this huge thing.”

He said that, for a while, the title was More, More, More. He thought that worked because it played into the ’80s idea of excess, and also “that’s certainly how Steve is too. It’s never enough for him.”

4. Nick’s Queerness is Not Weaponized 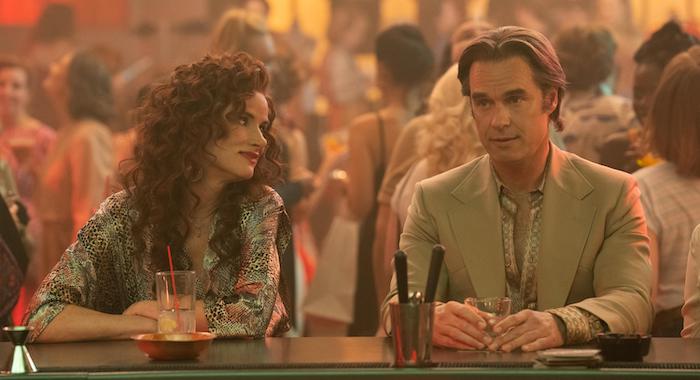 The real Nick was married to actress Jennifer O’Neill while he was in the closet, and this show attempts to stray from any narrative trope that equates queerness to victimhood. He is seen having a romantic relationship with Denise (Juliette Lewis), the Chippendales costume designer, as well as a more serious one with his financial backer (played by Andrew Rannells).

“The tragedy of Nick’s story is not anything to do with his being gay or being bisexual,” Bartlett said. “What unfolds in the story that we’re telling is that he has a beautiful, intimate connection with someone, and so there was some joy in his life in terms of his sexuality… but he became caught up in that dark story of dueling ambitions between these two characters, the Steve Banerjee character and Nick De Noia.”

Nick was a loud personality with a love of the theater. But Bartlett said that while “he definitely presented as theatrical, he didn’t necessarily present as super campy. He played against that.”

5. Liberties Were taken, but Fact-Checking Was Attempted 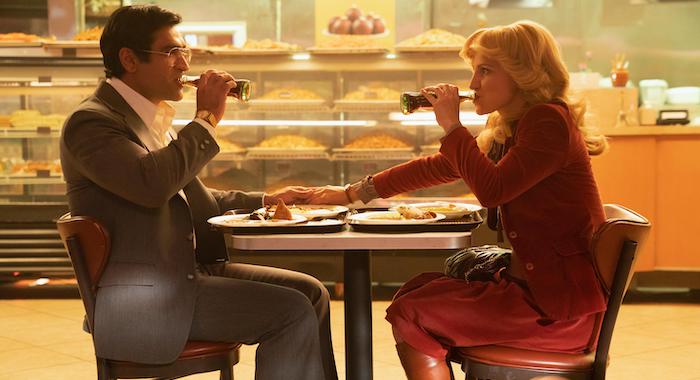 The writers based their series on the reporting in K. Scot Macdonald’s and Patrick MontesDeOca’s book Deadly Dance: The Chippendales Murders, as well as what’s in public record. Unfortunately, information on some people, like Steve’s wife Irene — who is portrayed by Annaleigh Ashford — was scarce. Konner said that the only picture they could find of her was from her wedding. Siegel said that, of the scant details he could turn up, he knew her maiden name, where she was born, and that she had died of breast cancer.

However, the writers also use Irene to serve as an anchor for Steve.

“Annaleigh and Kumail were really partners in this,” Siegel said. “And one of the things they always tracked was was Steve’s humanity and likability. Without that Irene character, I think he slips away from the viewer much faster.”