Little Women starts with a promising $29 million five-day take. Plus, the Cats-tastrophe continues. 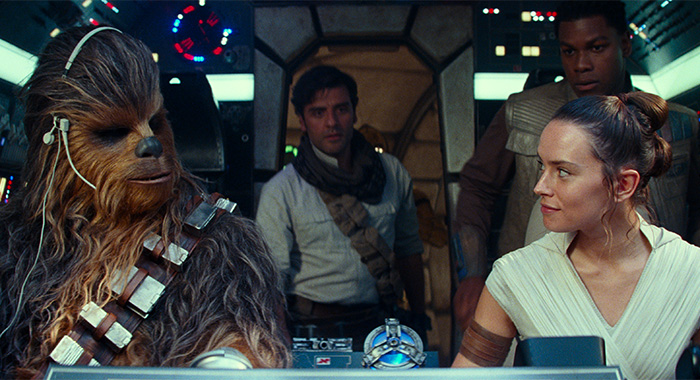 Moviegoers must have been hitting the malls to do some last-minute Christmas shopping last weekend or entertaining newly-arrived family members, because there was certainly an uptick in attendance this weekend. The trend was boosted by some freshly-minted releases for certain, but last week’s big (if somewhat disappointing) winner is still in the running to put itself back on the path for the Star Wars box office legacy we had always assumed for it. And there is still another whole week of vacation left for the kids.

King of the Crop: Rise of Skywalker Triumphs Again

The Star Wars legacy of which we speak is one of dollars and cents. Last week it looked as if The Rise of Skywalker was going to buck that trend and maybe come up short of The Last Jedi. While the film is not completely out of the woods yet, it certainly made a case that it is registering better with moviegoers than critics; having the second-best Christmas Day gross of any film (debut or not) with $32.16 million was among its achievements this week alone. The Force Awakens remains tops with $49.32 million, and The Last Jedi comes in with $27.45 million. (The all-time debut opener was Guy Ritchie’s Sherlock Holmes with $24.6 million.)

Skywalker then commanded $134.75 million from Wednesday through Sunday, with $72 million of that over the weekend, which still means a 59 percent drop. It now joins the list of the 10-best 10-day grosses of all-time with over $361.79 million. That is the eighth-best ever behind Marvel’s The Avengers ($373.07 million) and The Last Jedi ($368.16 million). This summer’s The Lion King is the only film on that list to not reach $600 million at the domestic box office. The Last Jedi made $71.56 million in its second weekend and finished with $620.18 million. The Rise of Skywalker still has a shot to join Return of the Jedi and Revenge of the Sith as the final chapters of each trilogy to outgross their second films, but it will take a strong second week of vacation and a third weekend of $53 million or higher to keep it on that path.


A24 has only taken a handful of their films into wide release. Mostly on the horror side as The Witch, It Comes at Night, Hereditary, and Midsommar went there on opening weekend. Others like Spring Breakers, Mid90s, The Disaster Artist, Lady Bird, and their Best Picture–winning Moonlight got into the 1,000-plus venue category eventually. The lauded indie studio must be in stitches this weekend as they moved Josh and Benny Safdie’s Adam Sandler–starring thriller Uncut Gems, after two weeks of a successful limited release, into 2,341 theaters and saw it make $5.9 million on Christmas Day, $9.5 million over the weekend, and $18.86 million since Wednesday. After just five days of wide release, the film has made nearly as much as Midsommar did in 17. By next weekend, it will be the third-highest-grossing film in the studio’s history. This weekend was the second-best ever for the studio, and Uncut Gems is going to make a run at Lady Bird’s $48.95 million as their highest-grossing domestic film ever.


Shining a dark light at the bottom of the list this week are three films that have not crossed the $20 million line yet. Universal’s Cats is the biggest debacle among them. The $95 million production may be drawing the curious, but $17.82 million in 10 days is just not going to cut it. Lionsgate’s Bombshell is not doing much better with just $15.63 million in 10 days of wide release and another $409,281 in a week of limited. Clint Eastwood’s Richard Jewell has been in release for 17 days, and the $40 million film has only made $16.08 million of it back.

Speaking of director Greta Gerwig, let’s talk about the true newcomers to the Top 10 this week and how they are looking. Fifteen films have opened wide on Christmas Day and gone on to gross over $100 million. The Greatest Showman is the only one to do it while opening to less than $7 million on the day. (Even more spectacular given it started with just $2.45 million.) Gerwig’s Little Women came close to that number with a $6.42 million start, and its odds of hitting the nine-digit milestone increase further with a $29 million start in its first five days. Of 38 films opening between $20 million and $30 million in their first five days in December, 14 have done it, and this film has great word of mouth and is likely to have a solid run into awards season. The three films on that list to garner Best Picture nominations (as Little Women seems likely to) have posted the following grosses: Jerry Maguire with $153.95 million, The Green Mile with $136.8 million, and War Horse with $79.88 million. Steven Spielberg’s film earned $26.02 million in its first five days.

Only three fully-animated films to open in December have grossed $100 million; Sing, Spider-Man: Into the Spider-Verse, and The Prince of Egypt. Fox’s Spies in Disguise has gotten off to a good start with $22.08 million since opening on Christmas with $4.76 million. To set the odds for Spies crossing the milestone, see the aforementioned Little Women stats, but the film has started with a more favorable five-day than The Prince of Egypt ($19.69 million).

One film that has successfully finished over the line this week is Rian Johnson’s Knives Out. $110 million and counting (including an additional $104.6 million internationally) has the mystery close to The Santa Clause 2’s numbers ($113.58 million after 33 days and a $12.13 million fifth weekend). That film finished with $139.23 million, so somewhere between $130 million and $135 million seems a reasonable landing point for Knives Out, which has become the third-highest grossing original film of the year behind Us and Once Upon a Time in Hollywood.

Frozen II, meanwhile, joined the $400 million club this weekend. The sequel is now just a day or two away from becoming the highest-grossing November opener ever and is $26 million ahead of the pace of soon-to-be-previous champ, The Hunger Games: Catching Fire. It is now headed to pass $450 million domestic and has also joined the Top 20 worldwide grossers of all-time with eyes on finding another $62 million to pass the original.

Jumanji: The Next Level also had a solid week, and while it has not reached $200 million just yet, that achievement is just around the corner. Eighteen December-openers have grossed $160 million or more after 17 days. Sony’s sequel ranks 16th on that list, and only National Treasure: Book of Secrets and Sherlock Holmes failed to reach $250 million. Jumanji: The Next Level is at $173 million and only five of the 18 films (The Force Awakens, Avatar, The Last Jedi, Rogue One, and Jumanji: Welcome to the Jungle) on that list had a better third weekend. The Next Level has grossed over $375 million worldwide to date.

Audiences were still seeing James Wan’s Aquaman on the final weekend of 2018. It grossed $52.11 million and crossed the $200 million line on New Year’s Day. Mary Poppins Returns placed second with $28.53 million and passed its first $100 million on New Year’s Eve. The Top Five was rounded out by Bumblebee ($20.90 million), Spider-Man: Into the Spider-Verse ($18.79 million), and The Mule ($12.16 million). Falling back to sixth and seventh were Christmas Day openers Vice ($7.76 million) and Holmes and Watson ($7.41 million), each of which grossed more in their first three days from Tuesday to Thursday than over the weekend. The Will Ferrell–John C. Reilly pairing became one of the 10 worst-reviewed wide releases of the year with just an 11% Tomatometer score. The leading per-theater-average of the week went to On the Basis of Sex ($20,798 in 33 theaters.) The Top 10 films grossed $165.71 million and averaged 67.3% on the Tomatometer.

On the Vine: Another Grudge


The first weekend of 2020 brings back a familiar horror series being remade (once again) for American audiences. Director Nicolas Pesce who gave us indie horror films, The Eyes of My Mother (78%) and Piercing (72%), takes over the helm for The Grudge, starring John Cho and Betty Gilpin. The 2004 remake (39%) opened to $39.12 million and grossed over $110 million. The 2006 sequel (10%) not so much, as it started with $20.82 million, but then could not even double that with just $39.14 million. Are audiences ready for a new one to kick off the new year?