As they return to the MCU as Dr. Darcy Lewis and FBI Agent Jimmy Woo, the stars share where they think their characters have been – and what they've learned. Plus, series creator Jac Schaeffer teases more big reveals. 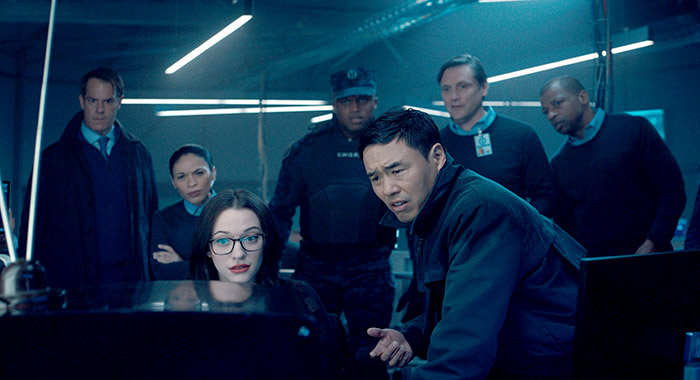 Warning: The below contains mild spoilers for WandaVision episode 4.

While it is still unclear within the context of WandaVision if Dr. Darcy Lewis (Kat Dennings) and FBI Agent Jimmy Woo (Randall Park) avoided the Snap and lived through the last five years, the actors who play them are pretty sure they did. Park even has the sleight of hand to prove it.

“My theory is that he lived through those five years … he needed that time to work on his close-up magic. I mean it looked pretty clean,” Park said, referring to the way Woo produced his card when he first meets S.W.O.R.D. agent Monica Rambeau (Teyonah Parris).

The trick is itself very much indicative of the magic surrounding WandaVision, and Rotten Tomatoes had the chance to talk to Park, Dennings, and showrunner Jac Schaeffer about that magic, Dr. Lewis and Agent Park’s return to the Marvel Cinematic Universe, and the possible meaning behind Wanda’s (Elizabeth Olsen) constant kitchen renovations.

Just as Park has the card trick to fall back on as his proof his character didn’t turn to dust – Woo had yet to learn the trick in Ant-man and the Wasp, set just before the Snap – Dennings said a conversation with Schaeffer led her to believe she also remained in the universe.

“We decided Darcy had not been blipped – so that was our decision in our character development, but unconfirmed,” she explained, adding it is still Marvel’s prerogative to reconsider that decision should it ever find a story to tell with Dr. Lewis’s disappearance. “I actually would like to know. Imagining Darcy in the Blip is very funny to me. And I don’t know, maybe one day we’ll get that flashback.” 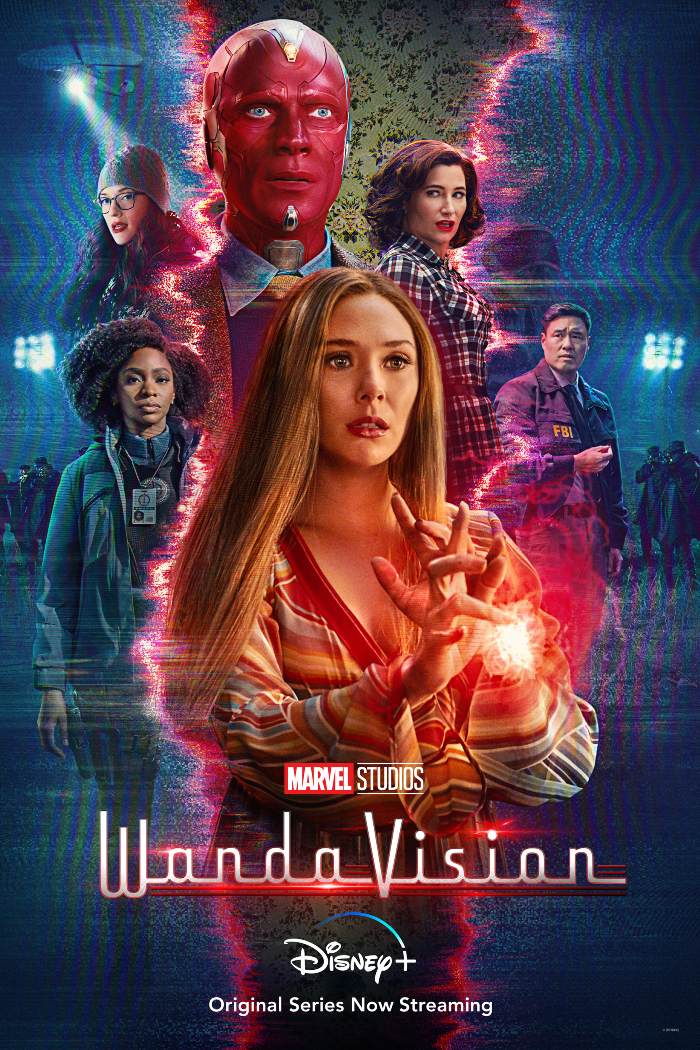 In bringing bringing Dr. Lewis back to the scene of the action, WandaVision also confirmed the character got her doctorate in the years since Thor: The Dark World.

“That was a huge and surprising part of the character I wasn’t expecting, so very gratifying to see Darcy’s evolution from intern to scientist,” Dennings said. “It’s nice to see her being the boss for once. You can see the influence [Thor’s] Jane Foster and Erik Selvig had on her to go from political science major to, now, an astrophysicist – it’s a fun payoff.”

Both were surprised at how quickly Marvel viewers have adopted them into their hearts, generated memes, and even started shipping the characters together.

“I did hear that some folks were clamoring for a spinoff with the two,” said Park, who noted he heard about it second-hand from friends with social media accounts. “I just think it’s so cool.”

Dennings agreed: “I saw a lot of that, and I was overcome with how much love there is after one episode. It’s so sweet.”

The outpouring of affection was almost instantaneous and, though not exactly the plan, Schaeffer said she hoped viewers would be excited to see both characters again.

“I knew Randall Park and Kat Dennings are inherently likable people,” she said. “So it’s not a surprise to me that people love them because they’re just lovable, no matter what they’re doing. What I didn’t expect was all of the attention to the fact that they’ve grown and changed over the years that we haven’t seen them. I didn’t anticipate so much appreciation for that.”

Presenting their off-screen growth in the since Thor: The Dark World and Ant-Man and The Wasp was definitely intentional, though.

“We wanted them to be the heroes of their space, and so, in order to be that, they needed to be good at their job, they needed to have grown professionally and personally and, yeah, people seem to be here for it,” Schaeffer said.

The series creator also aimed to put both characters in the position of the fans themselves – charting Wanda and Vision’s (Paul Bettany) movements within the sitcom-ized Westview and scanning the earlier episodes for clues about their predicament, although she and the writing staff arrived there by a circuitous route: Initially, it was a chance for the writers to put parts of the whiteboard they were using to map the show into the series.

“It was us trying to make sense of the rules of the world that we were creating and the mystery that we were building,” Schaeffer said. “And so a constant thing was stacking up the questions and then deciding when that question was answered and moving those cards around.”

Some of that thought-process made its way onto the set in the form of Agent Woo’s whiteboard. Which is not to suggest the board contains clues, though. As Schaeffer sees it now, it is very much a case of the writers engaging in the same questions the fans are now asking four episodes in. Although, she admits she did not “anticipate the one-to-one sort of fan simulcasts” emerging from each episode. 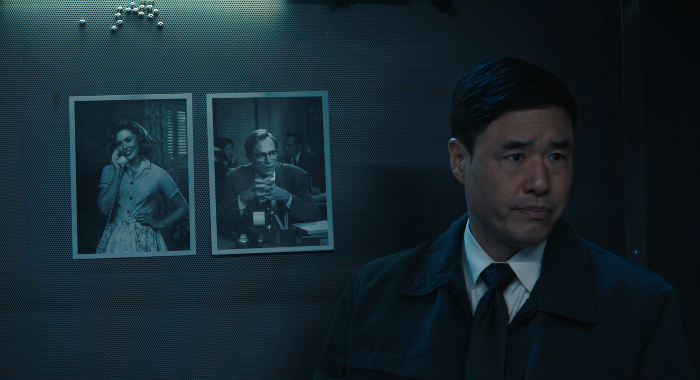 The level of interest and analysis supporting the “simulcasts” is thrilling to Schaeffer.

“People care and your greatest desire as a content creator is that people care,” she said. “So much agony goes into every single decision. So for people to then examine those decisions and pour over those decisions, I mean, it’s really making me feel like I’m super important,” she joked. “But it’s also a little intimidating because I want people to feel satisfied about where the show goes and I just really hope they do.”

As for our own examination of the details in the kitchen sets and the possibility that it may be commenting on the roles of women on sitcoms like The Dick Van Dyke Show and Bewitched, Schaeffer said it may be more of a subconscious element in recreating the look of those programs’ kitchens than a direct story point.

“The kitchen is such an important space and, especially in the earlier sitcoms, that was where the ladies hung out most of the time,” she said, crediting production designer Mark Worthington and episode director Matt Shakman with paying so much attention to the details of the shows being honored via the constantly-changing home Wanda and Vision share. 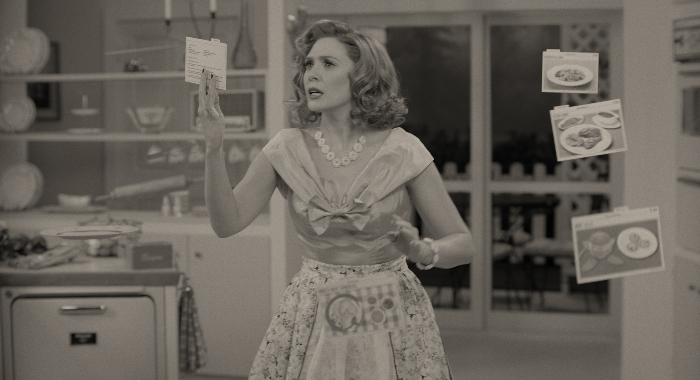 She also noted certain aspects of the sets remain the same from episode to episode.

“We wanted a continuity of feeling in the sets,” she explained. “So that’s why the kitchen and the living room are always oriented the same way, the doorway, all of that has a consistent layout to it.”

Indeed, the door to the front yard stays to the far left of the set, while the stairwell – since it debuted – remains in the center, and the kitchen to the far right. Whether or not the changes to the set have a deeper meaning remains to be seen. Schaeffer suggested a deep-dive Q&A with Worthington about his choices “might have to wait” until the full scope of the series is revealed.

Another question that will have to wait: whether or not Wanda can grieve. It is another key detail the series appears to be circling around, and Schaeffer only offered that Wanda is a “complex lady.”

That complexity is a clue to why she would recreate family sitcoms of the 1960s and ’70s – if she is behind all of this, of course – but it also speaks to the character’s experience with television. As it happens, no sitcom of the late ’70s fits the world she seems to be creating in Westview. That era of family sitcoms was dominated by producer Norman Lear, whose All in The Family, Maude, and Good Times confronted societal ills in a very direct way. Though Schaeffer and the writing team took a good look at those programs, she said, “The overt social commentary of those shows didn’t entirely align with what we were doing in the ’70s.” 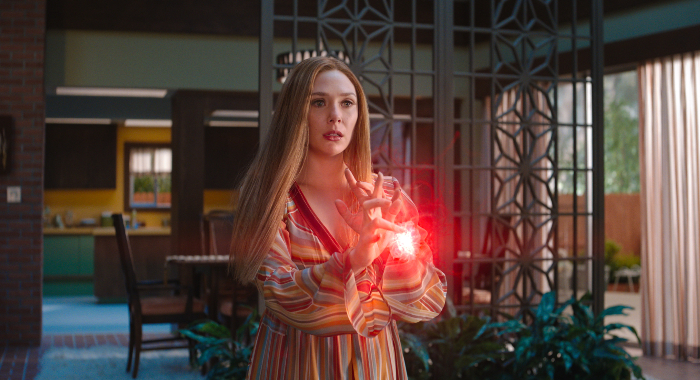 Wanda’s version of the Me Decade definitely appears dominated by the more affluent world of the Bradys than, say, that of the project-dwelling Evans family of Good Times or the one Maude Findlay strove to make for herself. A Wanda Maximoff hoping to avoid poverty and racial or political unrest is not hard to imagine, and as we will likely see in upcoming episodes, television shifted back toward an idealized middle-class affluence in the 1980s – something that will enable her to maintain the fantasy.

Regardless of how 20th-century sitcoms approached their material, they always did it in the classic (and boxy) 4:3 frame of cathode ray tube televisions. With WandaVision’s fourth episode, the Marvel world returned to the widescreen view of films like Iron Man and Avengers: Endgame. And now that the series has played with both frame sizes, Schaeffer said she expects viewers will embrace any screen size, color scheme, or plot development the program can dream up next.

“We’ve thrown a lot at them and what they’ve shown us is that they are ready for switcheroos and surprises and playing with form and structure,” Schaeffer said. “And they should expect a lot.”

Dennings and Park, meanwhile, never completely expected to return to the Marvel Universe, but are always happy to do so.

Park was similarly grateful for the opportunity: “It was a great thrill to be invited back because I thought that maybe Ant-Man and the Wasp might be my [only] time in the Marvel Universe. So to come back, especially in a show like this, is just really, really incredible. And if I come back again, that would be great. I would do it in a heartbeat.”