The artificiality of a set-bound story unfolding provides even more clues to the puzzle of Wanda and Vision's distorted reality.

With the advent of color on WandaVision, the series evokes an era of change and prepares for a big change itself — which may or may not be the real issue behind Wanda (Elizabeth Olsen) and Vision’s (Paul Bettany) current circumstances. But considering what we now know about Westview, can we safely say this is all Wanda’s doing?

Let’s try to decode the puzzle of television history to see what becoming a family sitcom means to WandaVision.

Spoiler Alert: This feature reveals details from WandaVision episode 3 “Now In Color.” Stop here if you have not watched the episode.

From Bewitched to The Brady Bunch: WandaVision Advances Its Family-Sitcom Aesthetic 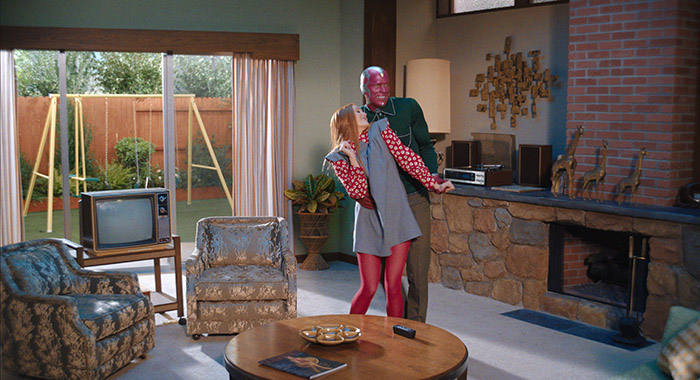 As we mentioned last week, the television series Bewitched began its life in black-and-white. It also started its run by focusing on newlyweds Samantha and Darren. Season 1 stories included Samantha meeting Darren’s parents — it was a whirlwind courtship — and Darren trying to keep Samantha from revealing her witchy powers to his boss or the neighbors. The parallels to last week’s WandaVision are obvious.

Continuing the parallel, to an extent anyway, is the switch to color and Wanda’s pregnancy — both a child and color filming would come to Bewitched by its third year. But it’s clear from episode 3’s Partridge Family–inspired credit sequence and The Brady Bunch–style set alterations that WandaVision is moving away from the Bewitched format into the late 1960s or early 1970s and the large-family sitcoms of that era.

The Brady Bunch, launching in September 1969, told stories about a blended family of six children — three girls from wife Carol’s previous marriage and three boys fathered by widower Mike Brady — coping with their new living arrangement. Though it would last only five seasons, endless re-runs through the ’80s and ’90s (and four attempts to continue the series in new forms) made it iconic and a clear go-to as Wanda anticipates her soon-to-be family.

Although, it could be argued The Brady Bunch‘s most iconic element is its late ’60s decor, given a loving tribute on WandaVision via the multi-colored frosted glass feature above the entrance in this week’s episode. The sudden appearance of brickwork throughout the house, the step down from the foyer to the living space, and certain elements in the kitchen — note the island and oven — also evoke the look of the classic sitcom. 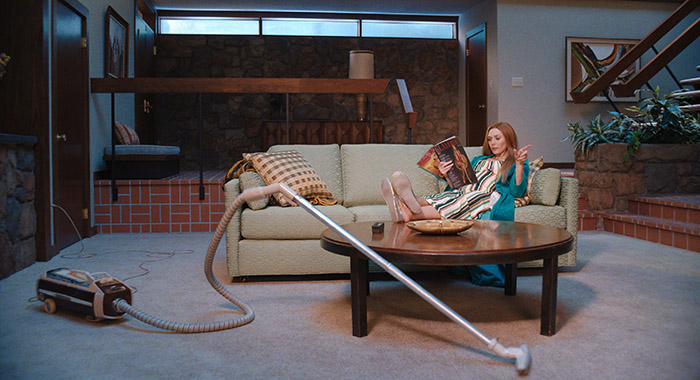 But as with the stylistic callbacks to ’50s sitcoms in the first episode, episode 3’s commitment to the Brady aesthetic extends outside the home. Both the backyard and front areas are realized with sets (and an obvious painted flat for Herb’s home), fake grass, and a few other visual cues which both honor the Bradys’ on-set backyard and call attention to the artificiality of the situation.

In the previous episodes, the front of the house was shot on location (or a studio backlot) with natural sunlight. Here, Vision’s talk with Herb (David Payton) and, later, with Agnes (Kathryn Hahn) extend the set-bound feel of the Maximoff-Vision home, which we’ll refer to from here on out by its address number of 2800. For careful watchers, the change of production technique should offer a sense of foreboding well before Vision notices Herb cutting through the cement wall with a edge trimmer.

But to come back to The Brady Bunch for a moment, the set-bound feel was not absolute. Production often went outside to shoot exterior scenes at the kids’ schools (an administration building on the Paramount lot in Los Angeles), neighborhood streets, and family vacations. Which means WandaVision’s choice to be so set-bound this week means something.

It’s just too bad Vision loses his train of thought before he could sense that meaning. 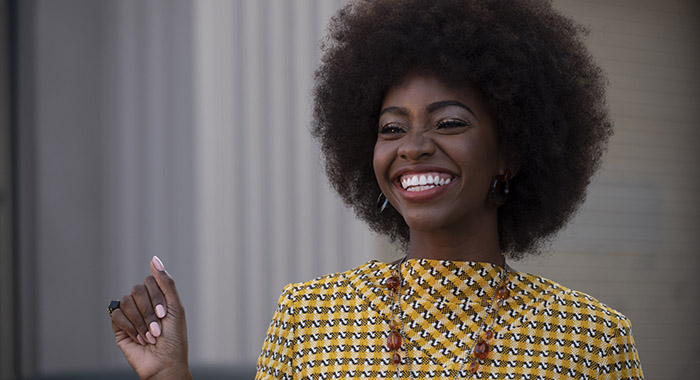 And while Vision is contained on the sound stage “exteriors,” Wanda is left to deal with early contractions and the unexpected arrival of Geraldine (Teyonah Parris). By the sound of the story she tells Wanda about her day at work, it seems like she’s the star of her own sitcom. As it happens, the first sitcom to feature an African-American woman in a career role (as opposed to a maid) was Julia, which ran more or less concurrently with the early seasons of The Brady Bunch. It starred Diahann Caroll as a widowed single mother working for a doctor at an aerospace company. And though the story Geraldine tells Wanda about getting a job at an ad agency takes us in a different direction, single mothers and aerospace lead us toward Geraldine’s true identity.

We also point out the feeling of her star power and the possible connections to Julia because the emerging sense that she doesn’t belong in Westview has a connotation we don’t think WandaVision intends, but is nonetheless present and an aspect of TV history. For the purposes of this episode, Geraldine is a black woman in 1968 breaking into the advertising world, and both Agnes and Herb find her “strange.” Agnes’s suggestion to Vision that Geraldine is wrong for the town would give offense if not for other non-white faces like Herb and Norm (Asif Ali).

This week’s commercial, with its mixed family and direct reference to Hydra, could be making a point about the values Strucker wanted Wanda and her brother to believe in. Could Hydra have purposely fed her a diet of classic sitcoms to instill their notion of a “proper” society? 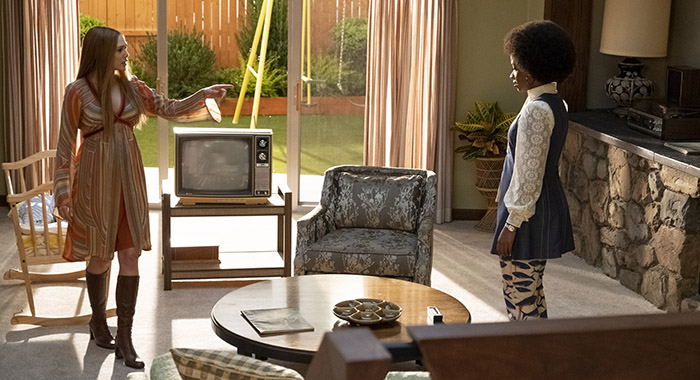 In the series text, though, Geraldine’s otherness comes to light as she tries to get Wanda to talk more about her brother Pietro (Aaron Taylor-Johnson). It seems, for the moment anyway, that she’s forgotten about his death. Or, at least, the circumstances of his demise in Avengers: Age of Ultron. But Geraldine’s knowledge of events and her attempts to coax it out reveal one important detail to Wanda: Geraldine’s really not from around here.

Of course, as we’ve all known for quite some time thanks to Marvel’s publicity machine, Geraldine is really Monica Rambeau, the grown-up daughter of Captain Marvel’s Maria Rambeau (Lashana Lynch), a fighter pilot and single mother. Also, thanks to Wanda’s rejection of her presence in Westview, we also know the town is a physical location somewhere on Earth surrounded by an energy field that resembles the Red-Green-Blue of a cathode-ray tube television. It is also surrounded by some sort of government agency. We’re going to assume it is S.W.O.R.D. 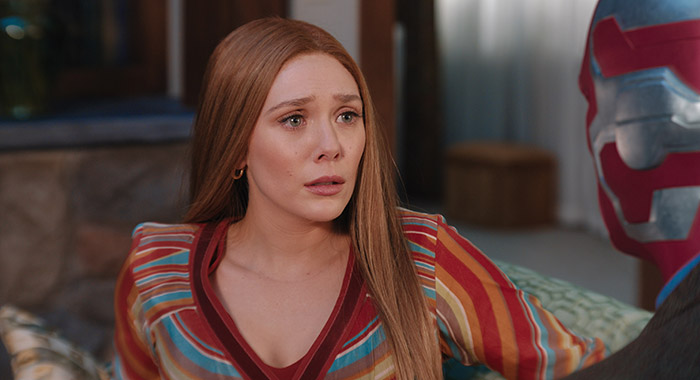 The Westview revelation might be the biggest reveal on any other show, but for WandaVision, it is merely a counterpoint to the arrival of Billy and Tommy, Wanda’s miraculous twins.

Back in the comics, the existence of the twins was a point of debate for many years. Originally presented as Wanda and Vision’s children — via magical means — it later turned out to be a grand deception involving various demons and mystical entities. The twins were gone for a time, but currently exist as flesh-and-blood beings and members of the Young Avengers.

It seems clear WandaVision wants to play with this tension because, even at this point, Wanda may be the real power behind everything. This week’s evidence comes in the way she forcibly removes Monica from town and her edit to Vision’s line of thinking when he starts to note all the oddities in Westview. If she is causing all of this, then the point was to create a family with children. Two children were ultimately required because Wanda was herself a twin, and we’re willing to bet she never dealt with the loss of Pietro; in fact, it is possible Wanda entered into her relationship with Vision to avoid her grief. 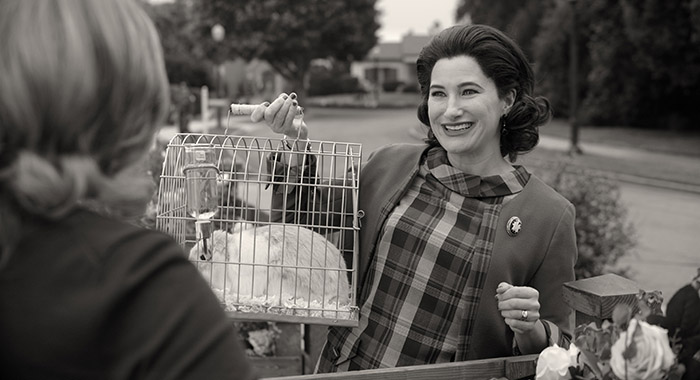 All of that is assuming, of course, that Wanda is causing all of this. There is another suspect, though: Agnes. At this point, all we really have is her status as the nosy neighbor and the way she voiced her suspicions about Geraldine. It is also possible to interpret her interest in Wanda’s life and the way she called her “the star of the show” in episode 2 as indications that she is aware of more than she lets on. Then, of course, there are the internet rumors suggesting she is really Agatha Harkness, the ancient sorceress who tutored Wanda in magic and revealed to her the true nature of Billy and Tommy in the comics.

We’re not entirely convinced of that yet. For one thing, Harkness is typically an ally of the Avengers and the Fantastic Four. Since we’re still leaning toward Wanda being behind all of this, we’re inclined to believe Agnes is just another resident of Westview who has been press-ganged into being part of the TV fantasy. Since Westview is a real place, it seems likely all the people we’ve met up until now are real as well and straining against these sitcom roles and characterizations.

Maybe this is why Mrs. Hart (Debra Jo Rupp) pointedly asked Wanda to “stop it” in episode 1. 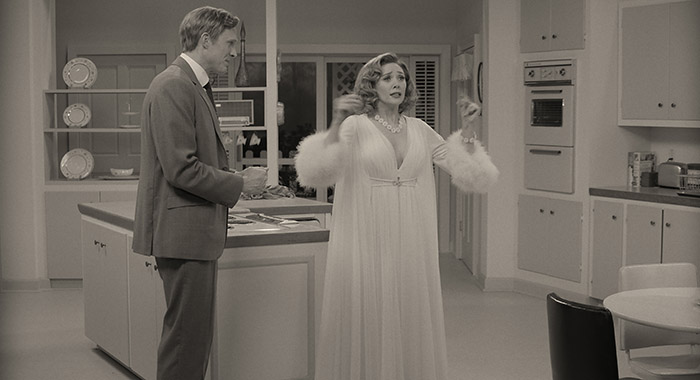 As we noted last week, the evolution of 2800 came with remarkable recreations of the kitchen sets from The Dick Van Dyke Show and Bewitched. But with the arrival of the late-’60s and early-’70s aesthetic, the kitchen set has stopped changing as drastically between episodes. The kitchen’s place in the overall layout of the home and the partition separating it from the dining area remain from the earlier episodes. Instead of replicating the Brady’s iconic kitchen color scheme exactly, it merely evokes the aesthetic with Vision’s comic book colors. Also, those looking closely will see the center island and the double oven are overt quotes of the Brady house.

We think the changes to the kitchen are meaningful. In terms of TV history, mother characters were relegated to the kitchen on shows like Lassie and Dennis the Menace. It is also the place both Darren Stevens on Bewitched and Ricky Ricardo on I Love Lucy would’ve preferred their wives to stay while they went to work. Even on The Brady Bunch, the kitchen was the place Carol was expected to be despite live-in housekeeper Alice. 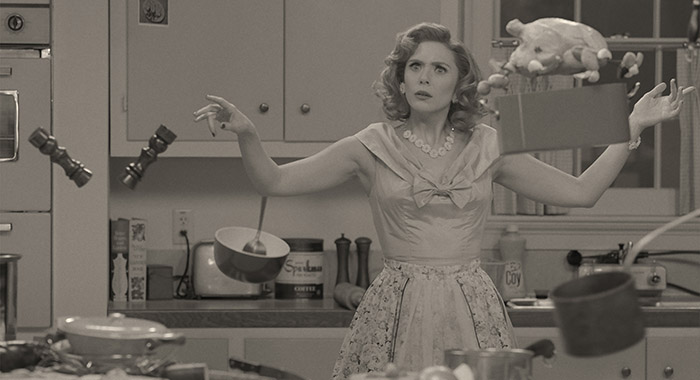 Going into next week, it will be interesting to see how the kitchen evolves again. From trailers, we know it will eventually mimic the Family Ties kitchen, but will a late-’70s sitcom inspire the decor before the ’80s arrive in Westview, or are we already headed to Reagan Era just four episodes in?