Nine years after the Vikings legacy first took shape on The History Channel, Netflix’s Vikings: Valhalla aims to continue the epic Norsemen adventure when it premieres on Friday, February 25 to the streamer. Taking place a century after the original series end, the spinoff follows some of the biggest names in Viking lore — Leif Erikson (Sam Corlett), Freydis Eriksdotter (Frida Gustavsson), and Harald Sigurdsson (Leo Suter) — as they face the expansion of Christianity and struggle to maintain their place in the ever-changing world.

History’s Vikings was a landmark achievement for historical fiction, laying the groundwork for what can be done with the genre on television. There may be extra scrutiny from die-hard fans, considering Michael Hirst (the creator and sole writer of the original series) passed the baton to current showrunner Jeb Stuart (Die Hard, The Fugitive), but as of this article’s writing, the project is winning critics’ options — season 1 of the new series is Fresh with a perfect score of 100% on the Tomatometer.

Here’s what critics are saying about season 1 of Vikings: Valhalla:

How does it compare to the History Channel series?

Valhalla, which covers the end of the Viking Era and showcases later-stage notables Leif Eriksson, Canute the Great, and Harold of Norway (among others), is a more straightforward series than Vikings was, more interested in the broader beats of the story than the poetic and spiritual ruminations of the original series. That’s not inherently a bad thing though, just different. – Matt Fowler, IGN Movies

If anything, “Valhalla’s” eight-episode first season improves on the original show — as it should, since it takes place in more interesting times. – Bob Strauss, San Francisco Chronicle

Like its predecessor, Valhalla is a beautiful show, dark and gloomy and vicious, with all the adornments of warfare that make the Vikings so fascinating in the first place. – Shane Ryan, Paste Magazine

How are the world-building and story pacing? 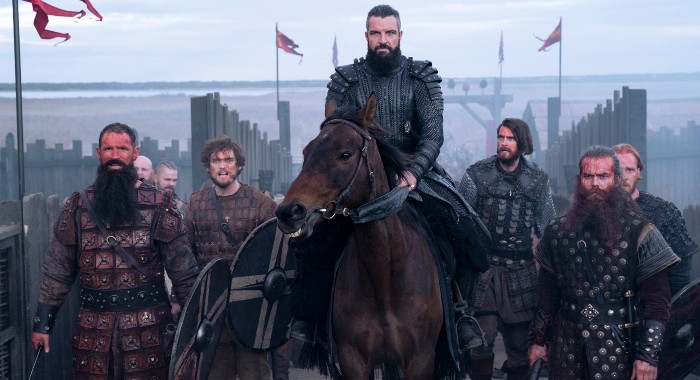 Additionally, Vikings’ special effect work (both practical and computer-generated) was nearly seamless, but in Vikings:Valhalla, much of the ocean sequences feel hollow instead of authentic. It’s clear where the green screen begins and the physical ends and it makes it hard to become fully immersed in those moments, and that’s how the series opens. That said, the work done in the fight sequences and religious rituals is just as detailed and intricate as you would expect from the franchise. Finally, the costuming and make-up in Vikings: Valhalla leaves something to be desired. While the gowns and furs are detailed, much of the armor and leatherwork seems generic as opposed to the ornate and detailed costumes in the original series. Add in the simplistic hairstyles and you have moments that could use a strong dose of war paint, braids, and detailed leather. – Kate Sánchez, But Why Tho? A Geek Community

The production value here is very very impressive when it comes to the big action-heavy set pieces. And also, when it comes to the details of Vikings culture, you give me a layered and highly-detailed way of life to explore and I’m going to want to soak in every single ounce of it. In the case of Vikings: Valhalla, that element of the show is just especially effective for the production design element, but also because of how strong the characters believe in being Viking and how powerfully that’s conveyed through the performances. – Perri Nemiroff, Perri Nemiroff

There’s a streamlined briskness to Vikings: Valhalla when compared to its predecessor that verges on glibness. Stuart takes advantage of his clean slate to tell a story that’s as much Game Of Thrones as Vikings in its appeal to gallop-paced and crowd-pleasing entertainment value over whatever pretensions to historicity the latter series’ aspired. – Dennis Perkins, AV Club

What about the action sequences? 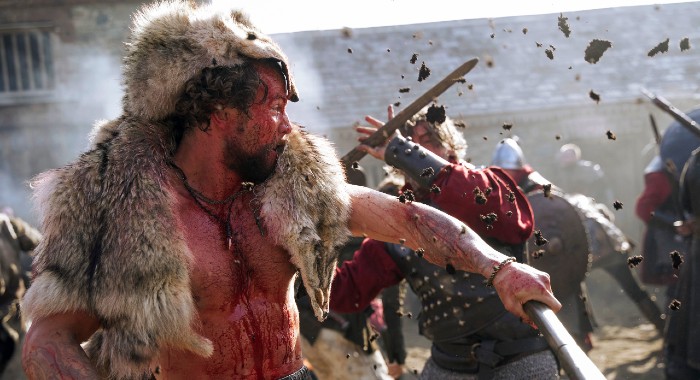 Vikings fans will be familiar with Valhalla’s visceral intensity, and it’s in the fight scenes and action sequences where the show truly shines. The slightly too clean choreography may not mesh as well with the handheld style of direction, but the battles are always entertaining. – Bradley Russell, Total Film

With all of that said, it wouldn’t be Vikings without battles, and Vikings: Valhalla has a lot to offer in terms of combat. With superb editing around fight sequences (both one-to-one and in open battle), the series maintains the violence and style that the original series expertly showed. With both men and women on the battlefield like the series before it, no actor gets the short end of the stick when it comes to showcasing their strength. – Kate Sánchez, But Why Tho? A Geek Community

If valiant death in battle is a straight shot to Valhalla, the road to an epic escape from modern confusion and catastrophe leads straight through the mayhem of “Vikings: Valhalla.” – Thelma Adams, TheWrap

How are Sam Corlett, Frida Gustavsson, and Leo Suter? 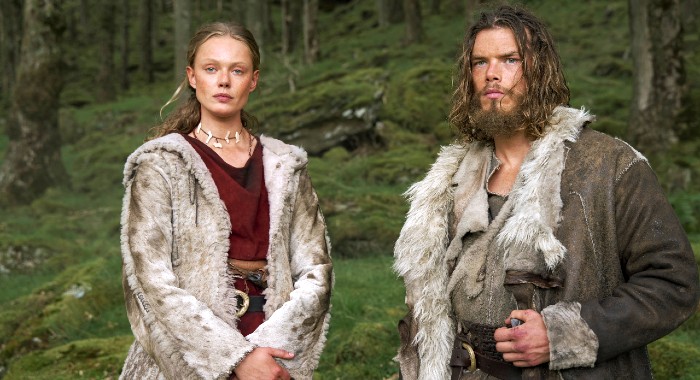 Corlett makes for a captivating Leif, who must struggle to resist enemies from within and without, while Gustavsson’s Freydis follows her own journey for most of the season, her destiny very much tied up in the more mystical, religious elements of the show. Gustavsson gives a powerful performance here, infusing Freydis with a noble heart and steadfast stubbornness that helps carry the back half of this season once the major assault on England is over and many characters scatter to other areas of the realm. – Matt Fowler, IGN Movies

I really do think the success of Freydis’ narrative has a whole lot to do with the conviction that Gustavsson brings to the role. She’s just got this intoxicating mix of warmth and ferocity. It just becomes really impossible not to get fully consumed by everything Freydis cares about and wants. – Perri Nemiroff, Perri Nemiroff 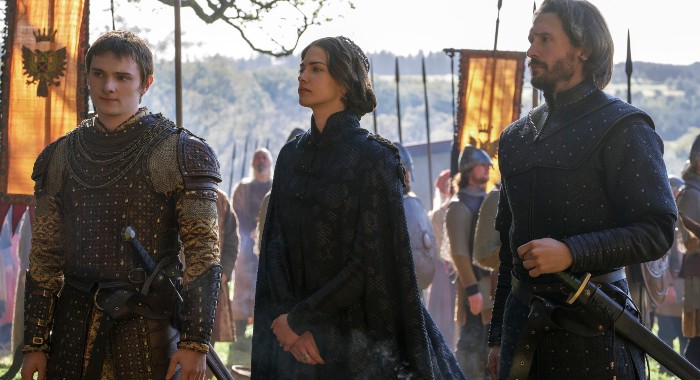 David Oakes’ performance gifts the viewer with just enough juicy double meaning so that we can see whirring gears start to turn in his head, all while his captive court remains oblivious. In that sense, it mirrors some of Game of Thrones’ best-laid plans, but those moments are few and far between. – Bradley Russell, Total Film

Viewers will choose their favorite characters, but special mention seems in order for Freegard’s Canute, a master strategist who’s only human; Laura Berlin’s Emma of Normandy, the consort and mother of multiple kings — and a cooler customer than any man she meets; Jarl Haakon (Caroline Henderson), the wise, part-African ruler of cosmopolitan Kattegat; and the terrifying fanatic Jarl Kåre (Asbjørn Krogh Nissen), leader of a Christian berserker horde out to kill every Scandinavian who doesn’t convert. – Bob Strauss, San Francisco Chronicle

The actors who get to ham it up are quickly the most entertaining, especially Jóhannesson and Asbjørn Krogh, who pops up halfway through the season as a vicious Christian Viking. – Dan Fienberg, Hollywood Reporter

The unexpected MVP of the middle of the season is Bradley Freegard’s Canute, who really steps up to become an intriguing presence half way, representing, perhaps, the end result of Ragnar’s drive to be a more progressive and understanding viking. To juxtapose this, Canute’s father, Sven Forkbeard, is rife with old-style viciousness. – Matt Fowler, IGN Movies 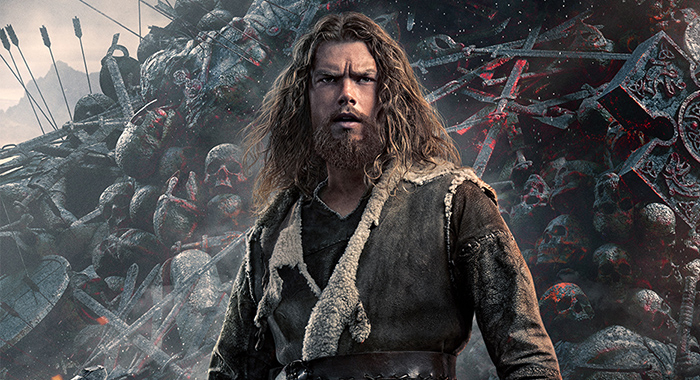 Click here to view full image in a new tab.

​​Less history lesson and more theme park ride, “Valhalla” should absolutely appeal to fans of the original show, and might even end up making a few new ones. – Brian Tallerico, RogerEbert.com

“Vikings: Valhalla” has a narrative elegance and drive without sacrificing the pillaging, passionate sex, pagan rituals and political intrigue that is played out everywhere from the pluralist port Kattegat in Norway to Britain’s London of the falling bridge. – Thelma Adams, TheWrap

Sky-high production value and an A+ ensemble. Vikings: Valhalla is juggling quite a bit in Season 1, but manages to support it all with a well-structured narrative and a slew of stellar performances oozing with ferocity and conviction. – Perri Nemiroff, Perri Nemiroff

To view Vikings: Valhalla as targeting the spirit of the times rather than to-the-letter of the times is to enjoy on its own terms, and its own terms are ultimately fair. Maybe they keep the show from being truly great, but in terms of pure entertainment and getting you to click that “next episode” button, everything here works perfectly. Like Leif Erikson setting out in a viking longboat, sailing west from Greenland, finding solid ground is achievement enough. – Shane Ryan, Paste Magazine

Don’t watch Valhalla if you haven’t watched Vikings first, not because the backstory is necessary, but because Vikings does all of the same things as its successor, only better. And if you loved Vikings, the first season of Valhalla suggests there’s a lot more story to tell and the resemblance between the two series is growing. – Dan Fienberg, Hollywood Reporter

Vikings: Valhalla is a crisp and often very entertaining re-skinning of the Vikings franchise that could use a little more of Vikings’ often messy ambition. – Dennis Perkins, AV Club