Netflix’s adaptation of The Umbrella Academy is both a delight and an often-sad look at difficult family lives and the scars of growing up with great expectations. Those expectations are even greater in the series considering that the mysteriously born children adopted by famous adventurer Sir Reginald Hargreeves were raised specifically to hone their extraordinary abilities and eventually save the world. Since the series is based on a comic book with super-powered people, it is reasonable to assume the show will have a few big fights or apocalyptic moments — and maybe some people in super-suits.

As it happens, the apocalypse comes courtesy of the least likely of the Hargreeves children: seventh child Vanya (Ellen Page). 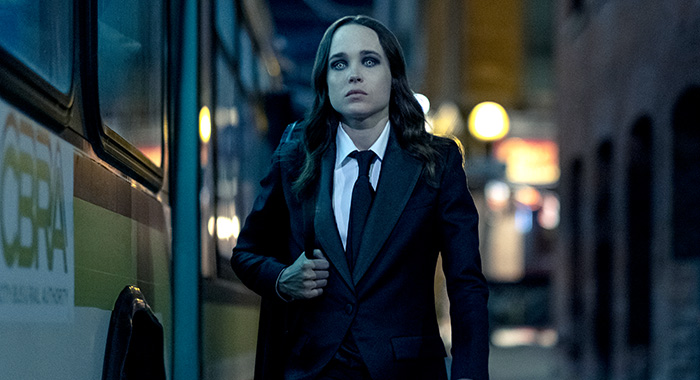 Finally free of the drugs her father put her on and aware of her potential thanks to the mixed-up plans of Leonard Peabody (John Magaro), she decides to perform a violin solo at her concert with her full powers on display. A similar scene occurs in “The Apocalypse Suite,” the first long-form Umbrella Academy story by Gerard Way and Gabriel Bá. But there is one big visual difference between the two versions of the scene: Vanya’s choice of outfit. In the comic book, her super-suit has a more traditional superhero (or supervillain) look — a form-fitting leotard with a black and white violin motif. In the television series, Vanya wears a smart, traditional suit that turns from black to white in the middle of her solo.

When Rotten Tomatoes caught up with the cast a few weeks back, both Page and showrunner Steve Blackman shared some thoughts on the decision to reshape Vanya’s most powerful look and the choice to downplay many of the superhero tropes on display in the comic. For Page, that started with Vanya’s switch from the leotard to a suit.

“I’m tired that women always have to look a specific way, particularly in superhero sorts of things,” she said. “I’m just tired of it.”

His star wanted to embrace the black and white motif of the comics, “but she didn’t see herself necessarily in that skin-tight outfit,” Blackman explained. “It didn’t feel right for her, so we respected that. We came as close as we could to the graphic novel in terms of sort of having her emotional transformation and this physical transformation. So it’s just a different ‘White Violin’ than the one from the graphic novel.”

Page called Blackman and Netflix’s decision to back her idea a “testament” to their good faith and willingness to listen.

“I have never worked on something that’s of this scale and been able to wear what I want to wear and not have ridiculous, stupid, f—ing conversations full of misogyny and homophobia and all kinds of things,” she said. 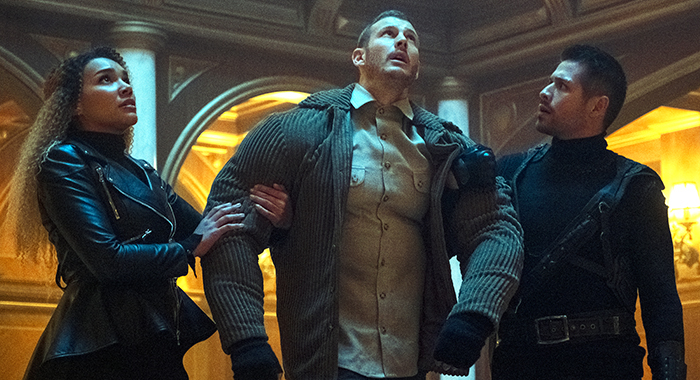 But even beyond Page’s strong feelings about her costume in the finale, the television show scaled down and grounded some of the fantastic imagery artist Bá brought to the comic book. Blackman acknowledged part of the decision comes from purely practical reasons: i.e., Luther’s (Tom Hopper) eight-foot gorilla body from the comics would break the budget.

“It was just much harder to do it [that] way,” he explained.

Instead, Luther’s body is contained in clothing that still implies the character’s unusual size and strength without requiring constant visual effects (like the Hargreeves butler, Pogo).

Co-creator Way said the approach to Luther was “the best change” in terms of realizing Bá’s character designs on screen. But he admitted there was one stumbling block in talking with Blackman about the series: the deletion of the code names.

In the comic book, each character is referred to by the number Sir Reginald Hargreeves (Colm Feore) gave them, the personal names they later adopted, and a superhero identity procured during their days as teen adventurers. Luther, for example, was known as “Spaceboy,” while Klaus (Robert Sheehan) was “Séance” and Allison (Emmy Raver-Lampman) was known as “The Rumor.” Way and Bá refer to the characters by these names, while Blackman chose to focus on the personal names.

“There was a minute where they would use one of the kids’ real names, and I was like, ‘Who are they talking about,’ to Gabriel. ‘Oh, he’s taking about Spaceboy or he’s talking about Séance.’ That took some getting used to on my part,” Way said. 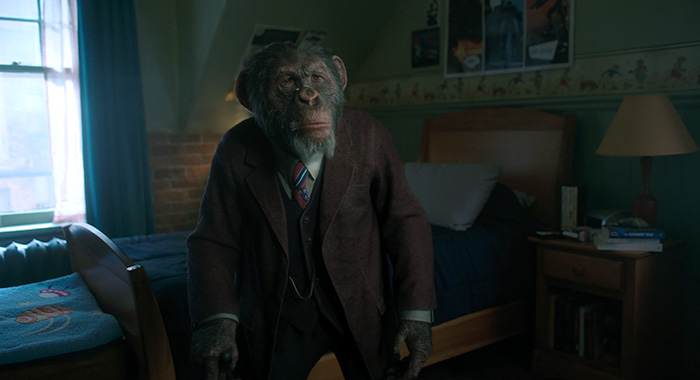 However, the code names could always emerge in a subsequent season, Blackman said. He also noted that there were many times when Bá’s style worked for the series, like the striped shirt Diego (David Castaneda) wears when the family unites to confront Vanya — a direct pull from the artist’s character model. He even pointed out Bá’s influence on Klaus’s on-screen look.

Way added, “Klaus is a little more kind of rock and roll [in the comic] as opposed to this kind of dry goth he was in the show. There are changes like that, but I think they lend themselves to the way the actors were playing the characters.”

Support of the book-to-screen changes is a sentiment definitely shared by the actors.

“That’s why I was interested in making [Umbrella Academy],” Sheehan said. “It’s much more interesting to show people who are supposedly super, or have these allegedly super abilities, couched in a very normal, familial, dysfunctional context.” 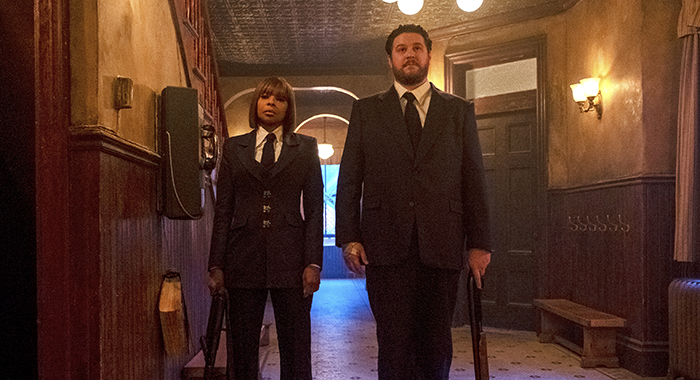 And even if the characters trade in a less traditional look through most of the show, superhero iconography — like the domino masks worn by the children — still permeates the show via the flashbacks to the Academy’s heyday. Also, the inclusion of Hazel (Cameron Britton) and Cha-Cha (Mary J. Blige) speaks directly to their comic book appearance in the second long-form Umbrella Academy story, “Dallas.” The duo’s masks echo Bá’s design — if slightly scaled-down in stature — while their spirits largely transfer from the page to the screen. It was important to Blackman to bring those characters into the TV version of “The Apocalypse Suite” instead of waiting and adapting “Dallas” as a completely separate story.

“You assume you’re going to have four years or five years on television in the best of worlds — knock on wood — but I thought if I only have one season, I really wanted Hazel and Cha Cha to be a part of it,” he said of his decision to introduce those characters. 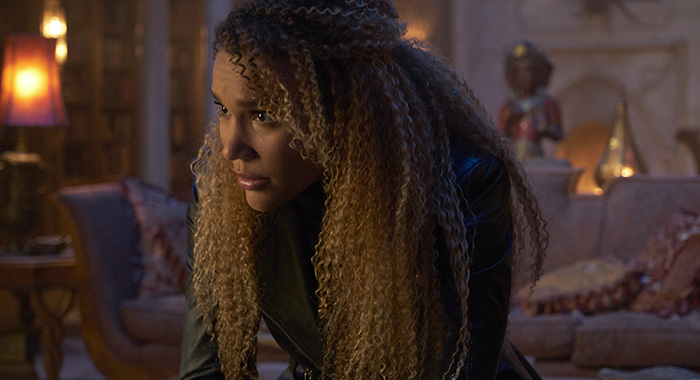 The series may downplay the costumes and code names of more conventional superheroes, but the powers of the Academy are never too far from frame. Klaus spends much of the first season reconnecting with his powers while Vanya discovers hers.

One character more at odds with her abilities is Allison, whose ability to control minds is framed as a form of child abuse when the story begins. We are told throughout the series that she used her power to get her restless daughter to go to bed. Her husband happened to see it, took their child away from her, and filed for divorce. But when the audience finally sees the moment, it is not presented in a sinister light. As Raver-Lampman explained, the scene gives greater weight to Allison’s suggestion that “any parent who had my power would do the same.”

“I mean, that is a way of taking a little bit of the grief off of herself and the blame off of herself,” she added. “I think for her, it just was like, ‘I’m gonna do it just this one time.’”

To Raver-Lampman, Allison’s whole struggle stems from the small uses of her power to make her life a little easier.

“She got it from her father,” she said. “He was always asking her to use her power to make his life easier.”

From there it snowballed it something her ex-husband definitely saw as abuse. The scene may make it a little more innocent and forgivable, but Raver-Lampan finally admitted, “If I caught my spouse doing that to our child, I would never trust them again.” 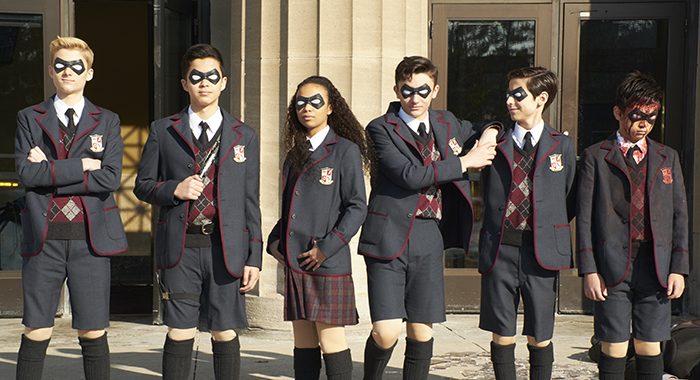 Of course, trust is a big issue among the Hargreeves, and it remains to be seen if they can build enough of it among each other to prevent the apocalypse — another change from the definitive end of “The Apocalypse Suite.” But as the adaptation of Umbrella Academy proves, deviating from the source can yield spectacular results.

The Umbrella Academy season 1 is available to stream on Netflix.