One, two, Freddy's coming for you... with some excellent creepy recommendations for what to watch while you're hanging at the homestead. 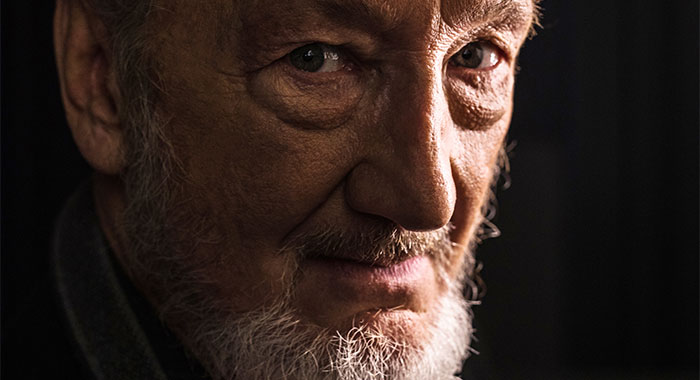 Social distancing can be a nightmare. But it can also be the perfect time to catch up on a slew of TV shows and movies you might have missed. And if you’ve got a taste for the macabre, the creepy, or the fantastical, horror icon Robert Englund has a few titles to add to your queues.

For four decades, the actor has relished terrifying audiences with his on-screen roles. His turn as Freddy Krueger, the burnt boogieman in the A Nightmare on Elm Street franchise, made him a household name. The 72-year-old actor pivots from the world of horror fiction to that of bizarre fact when he begins his run as host of Travel Channel’s new historical anthology series, True Terror With Robert Englund.

Featuring reenactments of news articles and tabloid stories from the 19th and early 20th centuries, Englund describes the new series as Unsolved Mysteries meets Ripley’s Believe It or Not!, and with tales that include Teddy Roosevelt’s Sasquatch sighting to the rampage of New Orleans’ Axeman — the serial killer was portrayed by Danny Huston in American Horror Story: Coven — it’s easy to see that some of these stories will get pretty wild.

Englund acts as the narrative glue to the series.

“I bring a little bit of my Vincent Price attitude and with the little bits of the Rod Serling rhythms in the writing that I get to play with, we kind of echo Unsolved Mysteries, but for a 21st-century audience with 21st-century sensibilities,” he told Rotten Tomatoes. “What does that creepy, that underbelly, that dark side mean to a more contemporary audience as opposed to a more innocent audience back in the day?”

He may be known for portraying monsters and killers on the big screen, but much like contemporary audiences the world over, Englund is a fan of binge-watching. And of the many genres available at the click of a button, Nordic criminal dramas (like Bordertown) is one of his absolute favorites.

“I love Scandinavian serial killer shows,” he said. “Or as I call them, ‘Blood and Snow with Volvos.’ They’re always really dark and really good.”

Read on for Englund’s bingeable list of recommended programming.

I use subtitles when I’m watching those Scandinavian shows, or a favorite like Peaky Blinders, whenever there’s access, because I want to learn the names, especially if they’re foreign names. It’s really opened a whole new world to me. I think that was something we all learned from the Oscars. You know, when Bong Joon-ho was so grateful for people using their subtitles for Parasite. People aren’t afraid of subtitles anymore. I love that movie, and I wouldn’t want to miss that for the world.

Blue Ruin, oh man. It’s directed by Jeremy Saulnier, and just — oh my god, this guy! He’s got some great stuff, this guy. He’s working with a whole group of people out of North Carolina that are just making some extraordinary stuff. They’re really talented people.

The English series takes place in turn-of-the-century London. It has Dorian Gray, Dracula and Renfield, the Wolfman, and Dr. Frankenstein — along with both of his Frankenstein creations — and they’re all in Jack the Ripper London, together. It’s with Eva Green, and it’s just phenomenal.

The dark little horror movie is, I think, maybe a year/a year-and-a-half old. Jeffrey Wright from Westworld is the star. And it’s got Alexander Skarsgård, the guy from True Blood and Big Little Lies. So it’s got that guy, Jeffrey Wright, and the granddaughter of Elvis Presley, Riley Keough. Skarsgård and Keough are a white-trash couple living in a trailer park on this Indian Reservation in Alaska. They’ve been indoctrinated, seduced, and recruited into a Native American wolf cult. To keep their child out of the cult, they send for Jeffrey Wright, who’s an expert at this type of stuff. It’s this amazing, dark, crazy movie. And it’s like nobody’s seen it but me. It has the single best shootout in the history of American cinema — or the history of cinema period.

I’m surprised that more of the Harry Potter fans, the Game of Thrones fans, the Lord of the Rings fans, and the fantasy fans haven’t been attracted to this show. What’s it about? Well let me put it this way: “fairy” is a dirty word on the show. So it’s a world where fairies are real, but they’re like slaves. It’s this kind of industrial, rebellious, steampunk world. It has humans and it has fairies, and it has another caste of people who have ram’s horns on their heads.

I just started watching this weird, dark, Welsh one. It’s about a London cop who’s the fish out of water. And he’s got some secrets that we don’t really know yet, but everybody’s very, very real. And it’s real creepy, incestuous, and strange.