Critics say it isn't as fresh or satisfying as Ragnarok, but it has fun with romantic comedy tropes and offers a formidable villain in Christian Bale's Gorr.

If you loved what filmmaker Taika Waititi did for the MCU with Thor: Ragnarok, you’ll also enjoy Thor: Love and Thunder, according to the first reviews of the latest Marvel movie installment. Whether it’s better than its predecessor, though, is up for debate, as is the success of Love and Thunder’s emotional and romantic elements and the stakes of its story. Does it have one of the MCU’s better villains? Could it have done more with other characters? Should you stay past the credits? Find answers these questions and more to the tune of GNR’s “Sweet Child o’ Mine.”

Here’s what critics are saying about Thor: Love and Thunder:

Does it live up to the hype?

Love and Thunder wholeheartedly works to subvert expectations at essentially every single turn, and it becomes a more compelling, if slightly more disheveled, film because of it. – Jenna Anderson, ComicBook.com

Thor: Love and Thunder isn’t as much fun as its trailers. But it’s close enough. – Roger Moore, Movie Nation

Considering the weight of expectations people have for this movie and how much they loved Thor: Ragnarok, there is a decent chance people will be let down. – Kaitlyn Booth, Bleeding Cool

How does it compare to Thor: Ragnarok?

Thor: Love and Thunder takes the Ragnarok formula and pushes it bigger and weirder than before. – Ian Sandwell, Digital Spy

Thor: Love and Thunder is a step-up from Thor: Ragnarok in terms of exhibition, wit, emotion, and maturity. – Lauren LaMagna, Next Best Picture

Love and Thunder is a far more emotional and, arguably, more satisfying story than its predecessor. – Rohan Patel, ComicBookMovie.com

Thor: Love and Thunder feels like it’s a bit more studied and considered in its approach. – Brian Lloyd, entertainment.ie

If the thematic and narrative freight that occasionally pervades Ragnarok’s humor feels purposeful, Love and Thunder is flippant with no undergirding focus. – Jake Cole, Slant Magazine 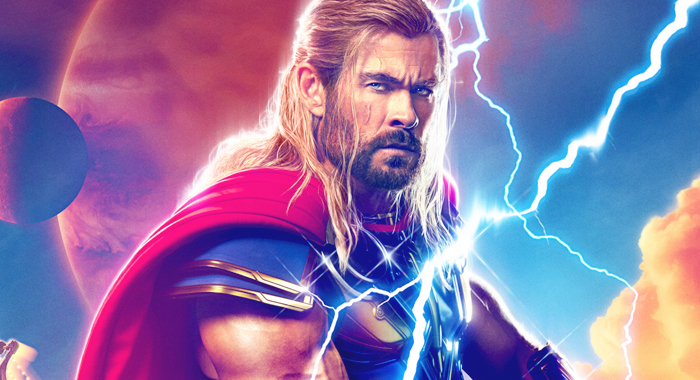 Where does it rank against the other MCU movies?

Thor: Love and Thunder is a return to form for the Marvel Cinematic Universe. – Ben Kendrick, Screen Rant

Thor: Love and Thunder is one of Marvel’s strongest films… It’s exactly what a superhero movie should be. – Lauren LaMagna, Next Best Picture

Thor: Love and Thunder is the most entertaining Phase 4 movie to date. – Ian Sandwell, Digital Spy

Thor: Love and Thunder [is] a hilarious sequel that borders on slapstick. – Julian Roman, MovieWeb

At its core is pure comedy that doesn’t always work but is good enough to entertain. – Valerie Complex, Deadline Hollywood Daily

Stumbles when it comes to bringing back — or trying to bring back — the flippant comedy that made Ragnarok stand out. – Josh Spiegel, Slashfilm 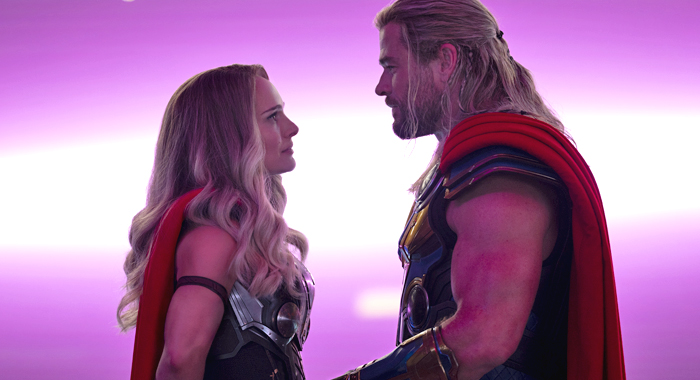 Is it romantic and moving?

As moving as it is funny. – Ben Kendrick, Screen Rant

I was moved. Moved by how two Thors could come together to love each other and to save the universe. – Owen Gleiberman, Variety

Focused more on the “love” than the “thunder,” the reinsertion of Jane into the Thor storyline really dampens the party mood. – Christie Cronan, Raising Whasians

Hemsworth and Portman’s practically nonexistent chemistry is difficult not to notice… Love and Thunder sags under the weight of this rudderless romantic angle. – Jake Cole, Slant Magazine

When the time comes for the emotional beats, they never land quite as effectively as they should… You end up wanting to see more of [Jane and Valkyrie] together as their interactions are more engaging than the standard romance tropes of Jane and Thor. – Ian Sandwell, Digital Spy

Thor: Love and Thunder is one of the most visually stunning movies in the MCU… The use of color, in particular, is jaw-dropping. – Caitlin Chappell, CBR.com

Visually, the movie also stands out from most MCU offerings… It certainly delivers on spectacle. – Ian Sandwell, Digital Spy

While the film isn’t as visually striking as Ragnarok, nor is it as revolutionary, the action and spectacle are as exciting and entertaining as ever. – Rohan Patel, ComicBookMovie.com

The CG environments are so expansive, and so garishly colorful, that it almost looks animated. – David Rooney, Hollywood Reporter

The most baffling technical element of Love and Thunder might be its cinematography and CGI work, which bounce between extremes of being genuinely beautiful and being muddy. – Jenna Anderson, ComicBook.com 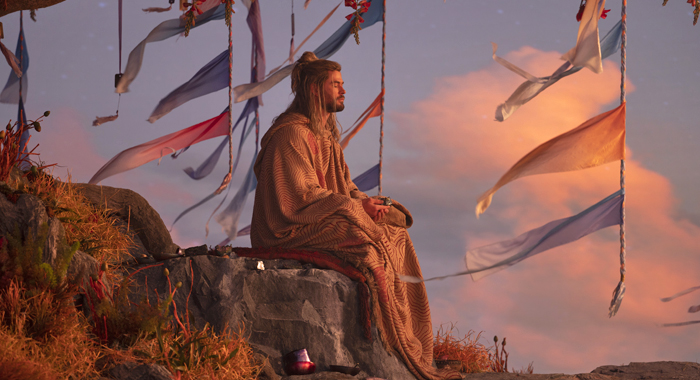 Is Taika Waititi still a perfect fit for the MCU?

Waititi’s vision for Thor is not just what the God of Thunder needs — it’s what the MCU needs, as he brings so much fun and heart to the big screen with Thor: Love and Thunder. – Caitlin Chappell, CBR.com

In a way, this is even more purely his baby than the last one was, and it shows. – Joey Magidson, Awards Radar

Waititi seems to be still finding his footing with this franchise, and it may take him directing another film to find the right balance for these Asgardian heroes. – Valerie Complex, Deadline Hollywood Daily

And how is the script?

Some of the movie’s best scenes essentially consist of two characters simply having a conversation. – Jenna Anderson, ComicBook.com

More than most recent MCU movies, the screenplay by Waititi and Jennifer Kaytin Robinson shows a crisis of imagination. – David Rooney, Hollywood Reporter

The real issue comes down to the script, by Waititi and Jennifer Kaytin Robinson, which veers from dark and dour tragedy to glib, dismissive comedy often in the same scene. – Josh Spiegel, Slashfilm

How is Chris Hemsworth this time?

He goes above and beyond… reminding us about everything we love about his Thor while also allowing the character to grow in an organic and incredibly exciting new direction. – Rohan Patel, ComicBookMovie.com

He embodies Thor Odinson at his silliest and saddest with an ease that still feels impressive after a decade-plus of him portraying the role. – Jenna Anderson, ComicBook.com

Hemsworth is at his all-time best this round, navigating a minefield of comedy and emotional beats. It’s the star’s most nuanced take on Thor to date and evolves the hero. – Ben Kendrick, Screen Rant

He’s having a good time, which is obvious on screen, and his enthusiasm and comedic timing remain on point. – Kaitlyn Booth, Bleeding Cool

Hemsworth is at his peak… Waititi offered him the chance to fully embrace the comedy that he is so good at and it flourishes even more in Love and Thunder. – Therese Lacson, Collider

The energy Portman brings is genuinely infectious and oddly cathartic in ways that will absolutely surprise audiences. – Jenna Anderson, ComicBook.com

Portman brings an incredible amount of heart and grace to the film, along with plenty of Jane’s trademark goofiness… [she’s] exceedingly easy to love. – Rohan Patel, ComicBookMovie.com 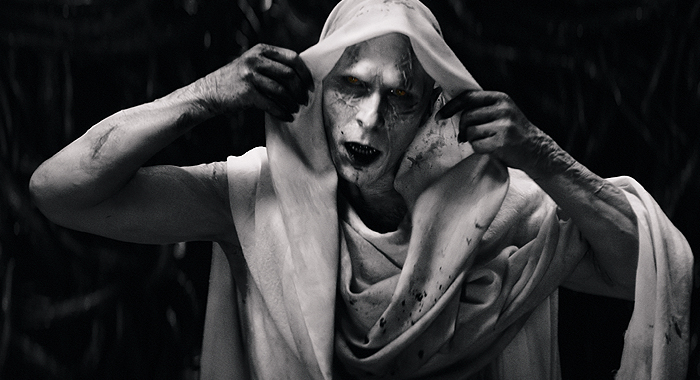 What about Christian Bale’s villain?

He upgrades this almost stock Marvel villain by sheer force of talent alone. He leans into not just his creepiness, but his pathos as well. – Joey Magidson, Awards Radar

Bale delivers one of the best villains the Marvel Cinematic Universe has to offer… While his actions are horrific, Bale brings an empathy to Gorr. – Caitlin Chappell, CBR.com

The way he delicately balances the sadness of Gorr’s past with his vengeful slaughter of Gorr’s present makes him exciting to watch. – Therese Lacson, Collider

Christian Bale is criminally underutilized as Gorr, and we don’t get nearly enough of him. – Kaitlyn Booth, Bleeding Cool

Tessa Thompson continues to shine as King Valkyrie, and is a scene-stealer throughout, leaving us wanting more every time. – Rohan Patel, ComicBookMovie.com

Thompson’s turn as Valkyrie tops what was on display in Thor: Ragnarok… She should be the protagonist of her own swashbuckling, intergalactic pulp novel. – Caitlin Chappell, CBR.com

The bulk of the humor comes from Russell Crowe…[in] a sequence unlike anything else the Academy Award-winning actor has ever done. – Lauren LaMagna, Next Best Picture

Russell Crowe’s arrogant showman take on Zeus is an exquisite farce and a standout, making a strong case for Gorr’s grudge against the gods. – Ben Kendrick, Screen Rant

If any part of the movie is truly hilarious, it’s the scene with Zeus, and it’s because of Crowe. – Josh Spiegel, Slashfilm 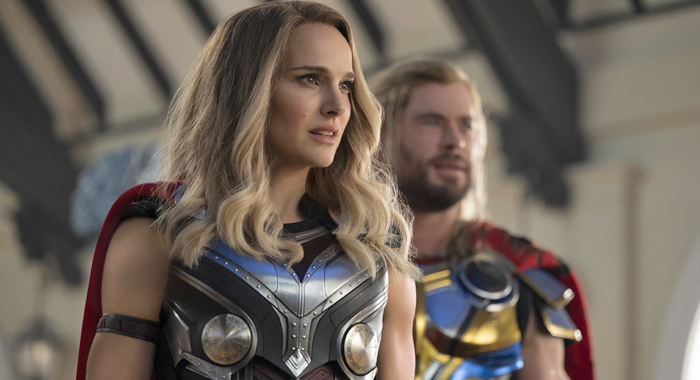 Should we stay for the credits?

Be sure to stay to preview a surprise or two. – Christie Cronan, Raising Whasians

The post-credits sequence is one of Marvel’s most beautiful and poignant scenes ever. It’s the perfect capper to this particular blockbuster adventure. – Rohan Patel, ComicBookMovie.com

The two post-credits scenes are among the most satisfying in some time. – Joey Magidson, Awards Radar