7 Things We Learned on the Set of Suicide Squad 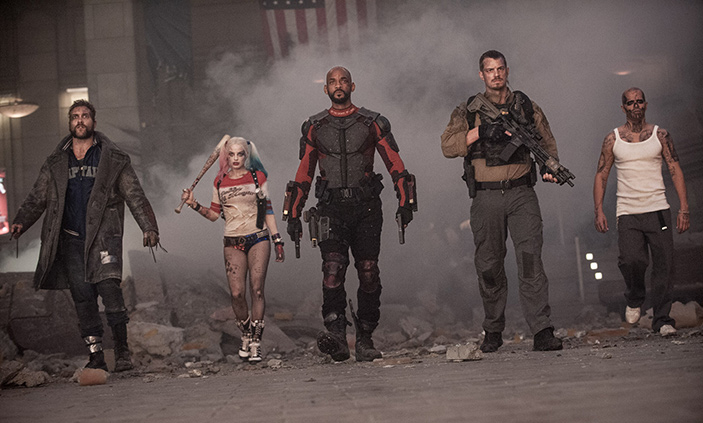 “They’re villains that don’t know they’re bad guys […] They’re just people who have made some really bad decisions in life and ended up in a bad place, and are trying to do everything we want to do, which is live, love, be happy.” — David Ayer (Photo by Clay Enos/ TM & (c) DC Comics)

DC Comics is expanding its cinematic Extended Universe this summer with the release of Suicide Squad, the third movie in the franchise to hit theaters. And not only will it bring a bunch of new, never-before-seen-in-movies characters, but it will also give fans a fresh take on the DC universe. We had the opportunity to visit the set in Toronto, Canada back in 2015, where we talked to the cast, producers, and director David Ayer, and took a peek into the action as movie magic happened in front of us. Here are the seven big things we learned. (Possible minor spoilers ahead.)

The cinematic Suicide Squad is neither pre nor New 52

When creating the cinematic version of the Suicide Squad, writer/director David Ayer pulled inspiration from multiple comic books and different iterations of the team, and calls his lineup “sort of an amalgamation,” using the John Ostrander series, the New 52, and Joker books as source material.

While the concept of the team is solidly based on the Ostrander team from the late eighties/early nineties, some of the characters are clearly inspired by their New 52 counterparts, like Harley Quinn — whose origin is briefly spoiled in the second trailer, matching the story seen on Suicide Squad #7 — and El Diablo, who only joined the Task Force X in recent years. Killer Croc, on the other hand, has not been a member of the team in the past, but apparently will be joining in during DC Comics’ Rebirth. Regardless of how recognizable the movie roster is, Ayer assured that the situations and plot in the movie will be true to the comics.

Secret origins will be addressed

The movie will feature the dawn of the Suicide Squad as a team, but at least some of its members will have their individual origin stories revealed. Ayer explains that even though comic book fans know these characters well, the movie is a great opportunity to tell the rest of the world who they are.

As mentioned before, we previously got a glimpse of what seems to be Harley Quinn’s origin, but that’s not all that has already been revealed. Those who remember the first preview, released last July, will recall a seemingly pre-Enchantress June Moone exploring a dark cave. While on set, we saw some concept art from that scene which revealed walls covered with prehistoric writings, while Enchantress was referred to as “something like a paleolithic goddess who used to be worshiped by primitive men.” Of all Squad members, she is the one the crew was most secretive about (and we didn’t get a chance to talk to Cara Delevingne) so we are expecting a few surprises involving Moone and her alter ego.

Magic is alive and well in the DC Extended Universe, but there is a caveat

With the introduction of Wonder Woman in Batman V Superman, divine magic made its debut in the DC Extended Universe (even though nothing has been confirmed about her background story yet), but the presence of Enchantress and Katana hint that the arcane arts are also about to make their first appearance. We got confirmation that Katana’s mystical sword, the Soultaker, is embedded with her husband’s soul, just like in the comics, and that there will be some dialogue between the two. The word “magic” was never used on set, though. Producers Charles Roven and Richard Suckle refer to these characters solely as capable of “doing inexplicable things.” The hesitation in calling it magic seems to imply that, even though it is there, superhuman powers are not something people understand very well — or even believe in — in that world yet.

You can expect plenty of humor

Many fans of the genre criticized both Man of Steel and Batman V Superman for being too dark and serious, but Suicide Squad  is definitely a different story. In a movie about solo super-villains forced to do good as a team, you can expect plenty of bad attitude, back-stabbing, sabotage, and dark(-ish) humor. The producers talked to us about the “dysfunctional family” quality of the Squad, in which they work well as individuals, but not necessarily as a group, and how that creates many humorous character moments that will hopefully surprise the audience in a positive way.

It’s an ensemble movie with Deadshot in the foreground

You shouldn’t have to worry about your favorite character getting just a cameo. We were told that, even though not all Squad members will get the same amount of screen time, they are all fairly well represented in the film, which is best described as an ensemble movie.  Don’t expect to learn everything about them, though, as some questions will remain unanswered for now.

That being said, Deadshot was described as the proverbial leader of the squad, and the central character in this story. David Ayer had Will Smith in mind since the beginning, and the character was written aiming to make the best use of the actor’s skills. The duo know each other from previous projects, and Ayer knew of Smith’s interest in being a part of this world, so he saw this as a great opportunity to bring the actor on board.

Geoff Johns is the Batcomputer of the DC Extended Universe

Writer/director David Ayer had complete freedom to come up with the world and characters of the Suicide Squad, but he had a little help from DC’s Chief Creative Officer, Geoff Johns, who Ayer refers to as “the keeper of the scrolls” of DC Comics.

When we were talking to the crew and cast, John’s impressive encyclopedic knowledge of the multiverse was mentioned more than once, and Ayer talked about how helpful it is to have someone with so much knowledge of DC lore involved in the writing process and contributing ideas that are faithful to decades of comic history. “Hey, I need a thing that can do these four things but not do this one thing. ‘Oh, you need this. Da, da, da. Boom.’ Okay, it’s going in the script,” explained the director, quoting the kind of dialogue Johns would  be summoned up to write.

“I don’t think we should freeze him in ice and never let him evolve with us as we evolve as an audience,” says Ayer about the shirtless, metal-mouthed, full-body tattooed Joker, reminding us how the character has changed on screen over time since the 1960s Batman TV series. He admits that Heath Ledger’s performance raised the bar (and subsequent expectations) really high, but defends that it  shouldn’t preclude reinvention. Visually, the intention is to give us a character that looks and feels like a modern criminal, someone who could emerge from today’s underworld.

When the topic is Jared Leto and what he brings to the role of the Clown Prince of Crime, Ayer says the audience is about to get a performance like never seen before, and that — with the new look added to Leto’s rock-star presence — it will be hard to ever imagine anyone else as the Joker. All fans have read the rumors about Leto being in character 24/7, being secluded from the cast, taking live rats to the set, giving away bullets, and more; all part of the process to create the ultimate Joker. Is the result of this about to give us the Joker we didn’t even know we wanted all along? We will find out that answer very soon.

Suicide Squad is hitting theaters this summer, on August 5.