The new murder-mystery series, from Spider-Man: Into the Spiderverse directors Chris Miller and Phil Lord, stars Tiffany Haddish and Sam Richardson and is a genre-mashing tribute to classic whodunits.

One part murder mystery, one part high school reunion, new Apple TV+ whodunit comedy The Afterparty will keep audiences guessing until the very end. The series, which hails from Chris Miller and Phil Lord (The LEGO Movie, Spider-Man: Into the Spider-Verse), follows a group of high school alumni who reunite for a lavish afterparty, only to find themselves embroiled in a murder mystery in which each one of them is a potential suspect.

Miller and Lord have worked together as co-directors on a variety of highly successful projects, but, while Lord has an executive producer and writer credit on The Afterparty, Miller took on the helming duties alone and pieced together this bonkers mystery into the eight-episode season that’s set to drop on Friday.

Rotten Tomatoes spoke with Miller and the cast to find out more about the series. Here are six things you need to know about The Afterparty.

1. It’s been in development for a decade. 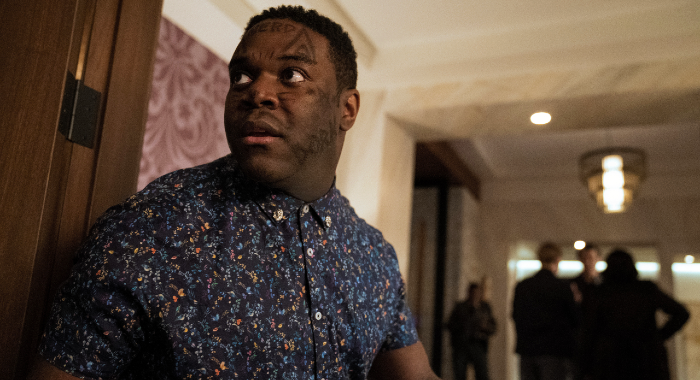 It’s been a decade since the initial idea for The Afterparty hit Chris Miller and a lot has happened since he wrote the script. Success hit, their schedules became packed, and The Afterparty got put on the back-burner.

“I wrote a script, sold it as a movie,” Miller explained. “I was going to make it, but we got busy making all the Legos, the Spider-Mans, the Jump Streets, and whatnot,” Miller said.

It wasn’t until a few years ago that Miller had a chance to revisit his idea and realized since this was a character-driven ensemble piece, the project would work better as a TV show.

“For a movie, you only get less than two hours,” Miller continued. “So each story has to, necessarily, be really short. So we thought, What if we turned it into a series where each character could get their own episode? You could really dive in and see them as complex and interesting characters and give them time to shine. That seemed like a better idea.”

2. Afterparty is a fun take on the murder-mystery genre. 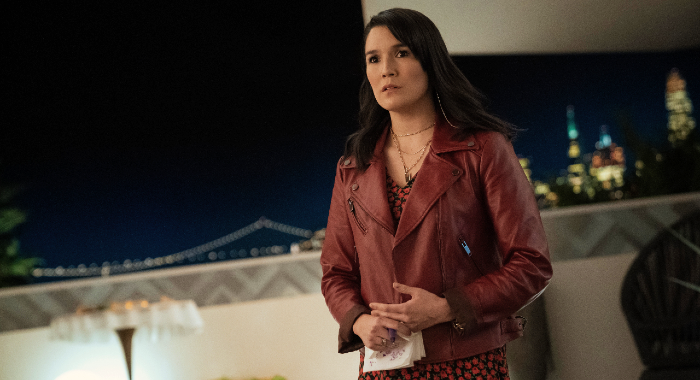 It’d be easy to look at the work Miller has put out over the past decade and peg him and Lord as animated-comedy guys. But if you dig a bit deeper, you’ll find that Miller is a die-hard fan of the murder mysteries. And The Afterparty is his love letter to the genre.

“I’ve always been a huge murder-mystery fan, growing up,” Miller revealed. “I was reading Agatha Christie, watching Columbo, The Last of Sheila, Murder, She Wrote, Poirot, that sort of thing. It’s always been interesting to me to do a murder mystery and told in a Rashomon style where you have each of the suspects telling their version of the night and you can only figure out who did it by hearing all of the stories.”

3. It was an epic storytelling challenge for Miller. 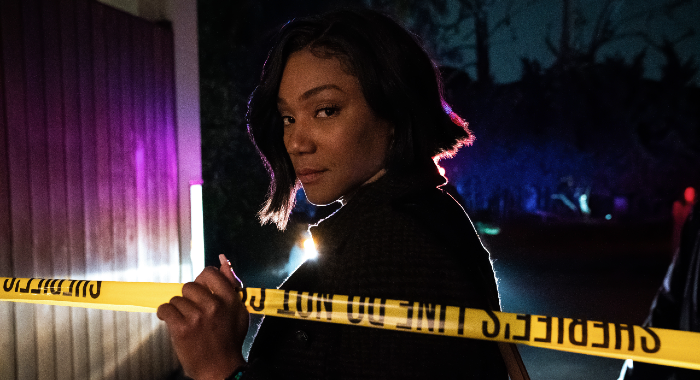 When thinking about the work Miller and Lord have put out into the world over the past decade, it’s clear that they’re great at delivering comedy gold. And let’s be clear, The Afterparty is funny. But it’s also operates by the rules of the whodunit genre. Concocting the story and making sure all the pieces fit properly, Miller admits, was an epic challenge.

“It’s one of those things that has to be a piece of clockwork machinery that is really figured out structurally,” he said. “It can’t just be like, Oh, we got a loose idea, we’ll figure out whodunit in editing. It has to be really, in essence, designed. Audiences are savvy. You have to stay three steps ahead of everybody. And you have to figure out a way to understand who did it, how they did it, and then you have to hide the obvious truths and then give everybody hints along the way so that, in the end, they’re surprised.” 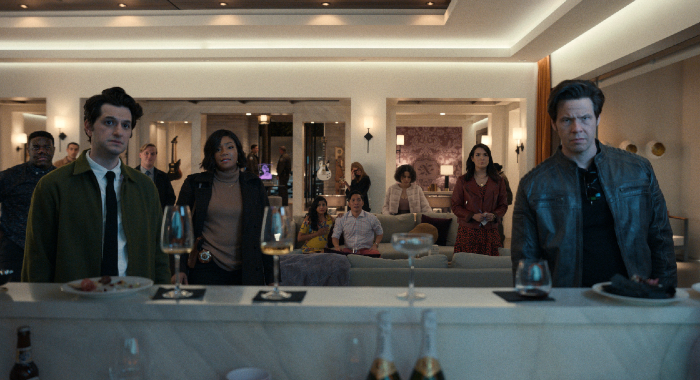 A true ensemble carries the show from start to finish. Part of the reason for that cohesive vibe is the comedic talent brought to the table. According to Barinholtz, Miller regularly allowed the cast to improvise their scenes in order to bring this world to life in a way that’s funny, fulfills the story, and feels as organic as possible. But considering how well each actor fits into the character they’re playing, we had to wonder if a casting notice was put out or if they targeted specific names for the roles. It turns out, it was the latter.

One actor they did target was Tiffany Haddish who steps into the Columbo-like role of Detective Danner. As Miller explains it, she was the perfect candidate for the job.

“I love Columbo, who’s a character that always would prey on people underestimating him” Miller continued. “They’d let things slip because they thought he was kind of absent-minded. Tiffany is a person who has been underestimated her whole life, and people don’t realize how savvy and sharp she is. She was the perfect person to do that type of character – to be a gossip, to talk and hear stories. But she’s actually paying a lot of attention and knows what’s going on — more than people realize.”

5. Each episode is a completely different genre. 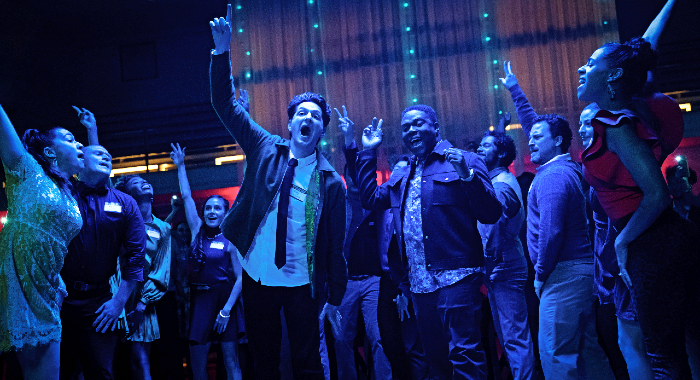 “Each person is the hero of their own movie, telling their story in the style of a different film style,” Miller said, explaining how he got to the idea that each episode tells a character’s story in a different genre. From rom-com to animation to action flick to musical, each episode offers a surprising perspective on the unfolding mystery while cracking open each characters’ stories, showing how they relate to each other and the overarching crime at hand.

Aniq’s story is the rom-com of the bunch and the character, Richardson explained, is “pretty much a Bridget Jones – he’s charming, but a little affable, and a little geeky and sarcastic. So getting to play all those things was a lot of fun.”

Chao’s character gets further exploration in the series’ only animated episode.

“Chris Miller and Phil Lord are the kings of animation, so it felt really special that I got to explore that with them,” she said. “It was also really informative to actually have an episode dedicated to examining the many different facets within Zoe.”

Barinholtz brought his Fast and Furious dreams to life for his episode, saying, “There’s definitely some Dom Toretto DNA in there.” The Mindy Project alum sprinkled some Steven Seagal action into things, as well. “There are moments where Brett is deep in his POV trying to look his coolest. You got equal parts Dom and equal parts Seagal. But he’s a 100-percent douchebag.”

Schwartz goes all-in for the musical episode. According to the actor, the whole thing was “initially exciting and then terrifying” because he had to get in a recording booth and “sing for real.” It was an experience he called “nerve-racking” and gives all the credit to his vocal coach, choreographer, and backup dancers for bringing the production to life.

“Each character naturally fit a specific genre of filmmaking,” Miller continued. “And then that evolved who the characters were based on the style in which we were telling their story. So it became sort of intrinsic to who they were and how they saw themselves. And that’s when it really blossomed into what it is now.”

6. Afterparty is ultimately a show about empathy. 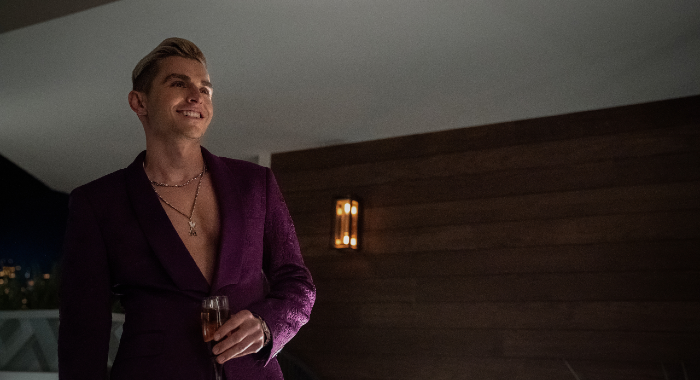 With each episode stepping into the perspective of a different character, allowing a new story angle to be explored, Miller described the show as, “ultimately, being about empathy, where you see events through your own lens. Sometimes, you will see other people as two-dimensional or as stereotypes. But if you see the world through their eyes, you realize that they are humans who have their own things going on. And they’re way more complex and surprising than you would have imagined.”