Critics say that despite a few minor quibbles with the script, Gina Prince-Bythewood's historical epic offers an awards-worthy performance from Davis, a breakout star in Thuso Mbedu, and impressively choreographed action scenes.

Viola Davis stars in the action drama The Woman King, which received rave reviews out of its Toronto International Film Festival premiere. Directed by Gina Prince-Bythewood (The Old Guard), the movie is said to mix mainstream Hollywood entertainment with a story of social and historical significance. The ensemble cast, including Davis, Lashana Lynch, John Boyega, and Thuso Mbedu, has been praised across the board, and the action is also a highlight. However, there are some minor disappointments in the script.

Here’s what critics are saying about The Woman King:

Is The Woman King a crowd-pleaser?

When The Woman King works, it’s majestic… The magnitude and the awe this movie inspires are what epics like Gladiator and Braveheart are all about. – Robert Daniels, RogerEbert.com

A hell of a time at the movies, a seemingly “niche” topic with great appeal, the sort of battle-heavy feature that will likely engender plenty of hoots and hollers. – Kate Erbland, IndieWire

Easily one of my favorite experiences of the year in a theater… It’s an action epic that is sure to make everyone stand up and cheer. – Kate Sánchez, But Why Tho? A Geek Community

An absolute blast. It’s a film that isn’t afraid to get you cheering. – Chris Evangelista, Slashfilm

As a mainstream action epic, it has plenty to offer. – Joey Magidson, Awards Radar

It is a splashy popcorn movie with a social conscience. – Caryn James, BBC.com 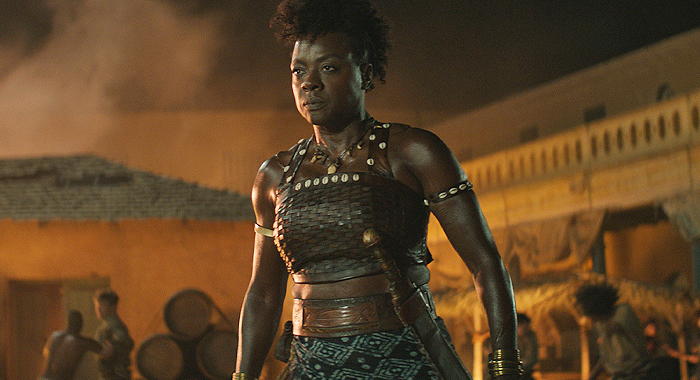 How is Viola Davis?

This is the greatest performance of her career. – Jamie Broadnax, Black Girl Nerds

Davis is stellar…[she] seems to carry the weight of the world on her shoulders just with a single glance. – Chris Evangelista, Slashfilm

This is Davis’s film, and her artful control of her face, her voice, and her body is breathtaking. – Kate Sánchez, But Why Tho? A Geek Community

The Oscar-winning actress, known for digging into her characters’ psyches, accesses an impressive level of emotional depth and nuance as Nanisca. – Lovia Gyarkye, Hollywood Reporter

Reminding us at every moment that she’s one of the best actresses of her generation. She’s the thespian rising tide that lifts every other performance around her. – Roger Moore, Movie Nation

Davis truly gets to flex the full range of her acting chops. A performance of this caliber is rare in what’s essentially an action flick. – Martin Tsai, The Wrap

Viola Davis is the movie’s title character and should have been in more scenes. – Carla Hay, Culture Mix

Does she rise to the occasion as an action star?

Viola Davis is a formidable force in The Woman King… [She] stuns in the most physically demanding role of her estimable career. – Tim Grierson, Screen International

If people like Bob Odenkirk and Liam Neeson can become action heroes in their 50s, Davis seems bound to show people she can, too. Her raw intensity is backed up by a newly jacked physique that makes her an imposing action heroine, and she performs exceptionally well in the numerous action scenes. – Chris Bumbray, JoBlo’s Movie Network

Davis showcases that action sequences can be just as intimate and emotional as dramatic moments… [She] can easily best any action star on the screen. – Kate Sánchez, But Why Tho? A Geek Community 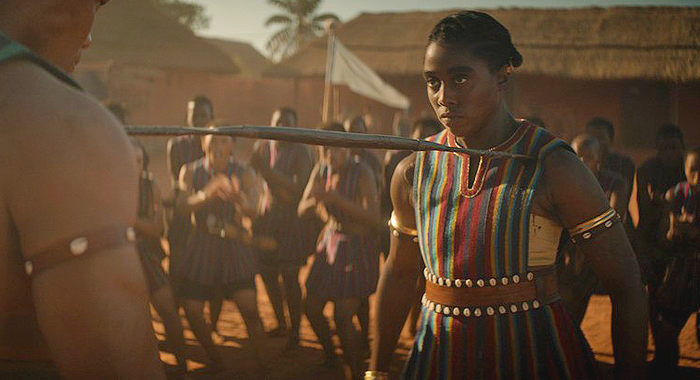 How is Lashana Lynch?

In a cast full of heavy-hitters, Lynch is the real stand-out… Every second she’s on screen is a treat, and I wanted more of her. – Chris Evangelista, Slashfilm

Lynch demonstrates the same steely authority that made her so appealing in last year’s No Time To Die. – Tim Grierson, Screen International

Lashana Lynch, the most experienced action star of the bunch with No Time to Die and the Marvel Cinematic Universe under her belt, is a standout as Izogie… and is responsible for some of the film’s most intense emotional moments. – Reuben Baron, Looper.com

Does anyone else in the cast stand out?

Mbedu, the jewel of Barry Jenkins’ Underground Railroad, shines as Nawi, a teenager sent to join the Agojie after her father abandons the project of marrying her off. – Lovia Gyarkye, Hollywood Reporter

Mbedu reaffirms herself as a star. – Robert Daniels, RogerEbert.com 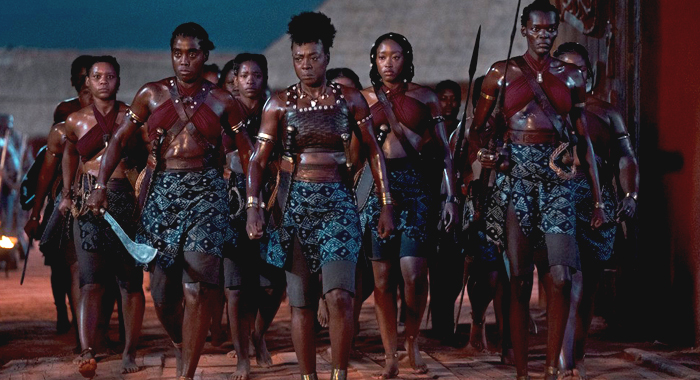 How is Gina Prince-Bythewood’s directing?

Prince-Bythewood has somehow managed to set the bar even higher for her own standard of women-empowered stories. – Jamie Broadnax, Black Girl Nerds

[She shows] a skilled eye for understanding that an action sequence is never just a fight, but rather a moment to tell a story packed with emotion. – Kate Sánchez, But Why Tho? A Geek Community

Her style encompasses the perfect balance of action and drama and is unafraid to put the brutality of humans on full display. – Valerie Complex, Deadline Hollywood Daily

It’s the movie Prince-Bythewood has been building toward throughout her entire career. And she doesn’t miss. – Robert Daniels, RogerEbert.com

The fight choreography in this film is by far the most impressive I’ve ever seen on screen in a very long time. – Jamie Broadnax, Black Girl Nerds

The battles are relentless and kinetic. – Caryn James, BBC.com

The fight scenes are big, bombastic, and often brutal. – Martin Tsai, The Wrap

Gina Prince-Bythewood has crafted battle sequences that are exciting and moving at the same time. – Tim Grierson, Screen International

The Woman King opens with an incredible action sequence… Men are getting sliced, diced and tossed across the screen by these mighty warrior women. – Valerie Complex, Deadline Hollywood Daily

The Woman King is at its best when our heroines are kicking ass. – Joey Magidson, Awards Radar

The PG-13 rating… makes the action sequences tamer than they should be. – Chris Bumbray, JoBlo’s Movie Network

The camera takes us inside the hand-to-hand combat, with warriors plunging spears into bodies and slicing throats. This is not benign, cartoonish action. – Caryn James, BBC.com

The sound team works overtime to give us a sense of brutality, but there’s no blood or gore when Davis and her crew are hacking adversaries to pieces. It leaves the battles looking a little too clean-cut. – Chris Bumbray, JoBlo’s Movie Network

There are moments where swords don’t connect and the wounds from being injured or killed look like bright red blots of ink rather than an injury from war. – Kate Sánchez, But Why Tho? A Geek Community

The Woman King has some intense battle scenes and depictions of enslavement that might be too hard to watch for very sensitive viewers. – Carla Hay, Culture Mix

The script by Dana Stevens (with a Story By credit going to Maria Bello) is a bit on the standard side, but it’s in service of the old school dramatic spectacle on hand. – Joey Magidson, Awards Radar

The plot to The Woman King can feel convoluted. But its excesses serve the film’s blockbuster goals. – Robert Daniels, RogerEbert.com

The script never goes quite as deep as it could. – Chris Evangelista, Slashfilm

The Woman King is sometimes cluttered and uneven… The development of the Nanisca character sometimes falls short of what many viewers might expect. – Carla Hay, Culture Mix 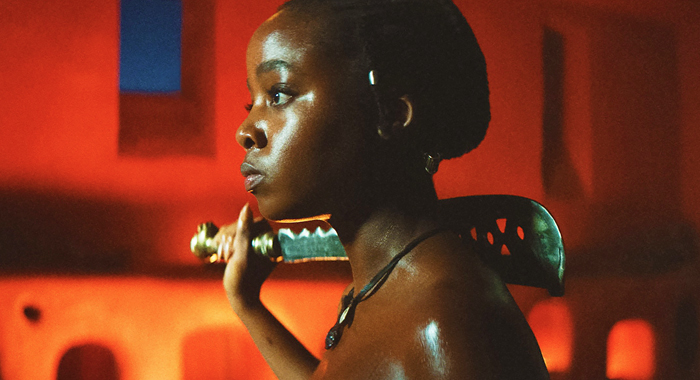 Does the romantic subplot work?

The inclusion of a romance subplot… feels quite forced and accelerated. – Kate Sánchez, But Why Tho? A Geek Community

A flat attempt at a love story… feels like the product of truly misguided studio notes. – Kate Erbland, IndieWire

It feels like it comes out of another movie… Mbedu, unrealistically, seems drawn to a man that associates with the same folks that routinely enslave her people. – Chris Bumbray, JoBlo’s Movie Network

The dramatic beats and subplots are fine, but they lack some of the consistent effectiveness that the fight scenes do. – Joey Magidson, Awards Radar

How well does it represent history and the culture it depicts?

The Woman King also does a phenomenal job of showcasing the culture, wealth, and beauty of Dahomey. – Kate Sánchez, But Why Tho? A Geek Community

The tactile costumes by Gersha Phillips and the detailed production design by Akin McKenzie feel lived in and vibrant, especially in the vital rendering of the Dahomey Kingdom, which is teeming with scenes of color and community. – Robert Daniels, RogerEbert.com

Production design by Akin Mackenzie and costumes by Gersha Phillips are lush and opulent, drenched in deep red and yellow hues. A lot of thought went into making the kingdom of Dahomey look as authentic as possible. – Valerie Complex, Deadline Hollywood Daily

The Woman King leans toward fantasy in its heroic moments, but is rooted in truth about war, brutality and freedom. – Caryn James, BBC.com

The Woman King begins as portraiture and then surrenders to melodrama when faced with the challenges of translating history for the screen and constructing a coherent geopolitical thread. – Lovia Gyarkye, Hollywood Reporter

The Woman King is an 8/10 for entertainment value, and 4/10 for how it deals with history. – Reuben Baron, Looper.com 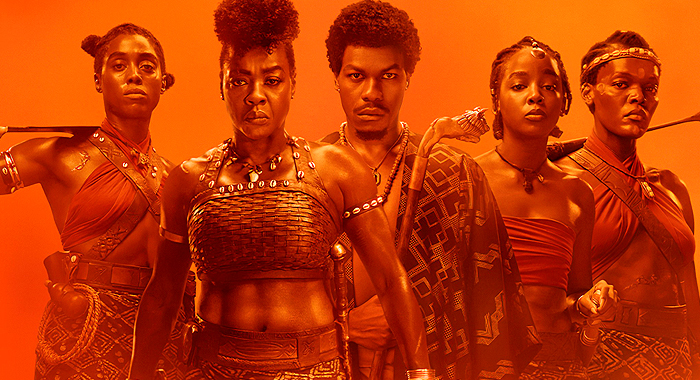 Do we need more movies like The Woman King?

In 2022, this should not be the exception. Hollywood should have been making films like The Woman King for many years… If this is what a Hollywood-ized and -sized blockbuster looks like in 2022, bring it on. Bring them all on. – Kate Erbland, IndieWire

Maybe one day we’ll get to a point where such a movie doesn’t feel groundbreaking, but here we are. – Chris Evangelista, Slashfilm